Frimley Green is another ground I've seen, but actually been in, or seen a game at. Fortunately they are situated in a public park, & the venue is surrounded by a mere chain link fence, which made it easy to photograph. They play in the Combined Counties League First Division, & I took these photos at the end of February 2010. 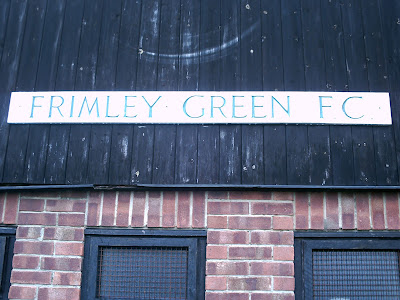 This is the public park that is their home. 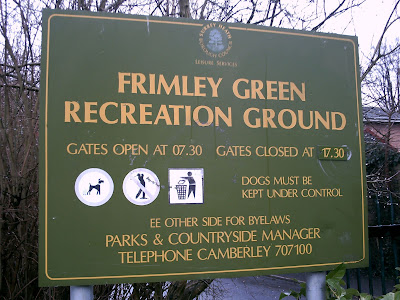 From the main road this drive leads up to the park, & the ground. 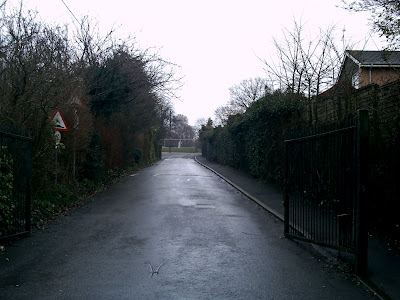 As you can see it is very basic, through the chain fencing. You can clearly see the rail pitch surround. 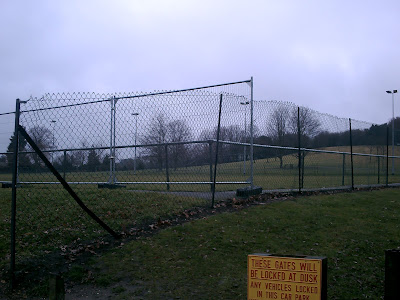 To the left, as we approach this corner, is the club house & changing rooms. Municipal tennis courts are to the left. 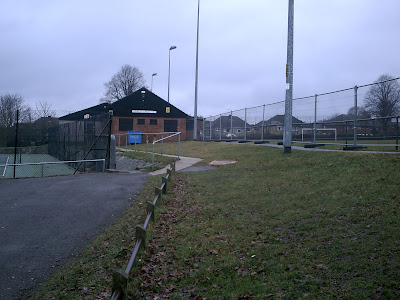 There is also this metal fencing down the side, which looks somewaht permanent. I am guessing this stays in place on match days, making this hard standing along this side touchline, for all practical purposes, 'out of bounds' to spectators. 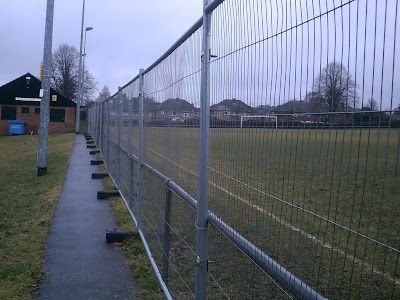 These brick dugouts are 'built' into the club building. Not the best angle, but I was struggling to take anything without the thin metal bars in the fence obstructing my camera. 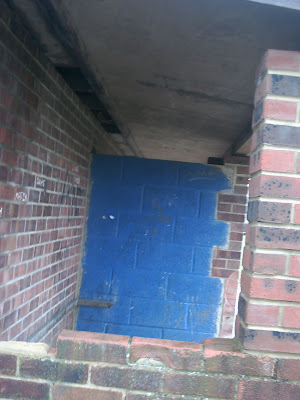 From the side of the dugout we look over to behind the far goal. 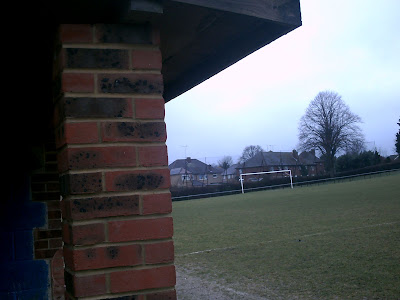 This path is behind the club buildings. 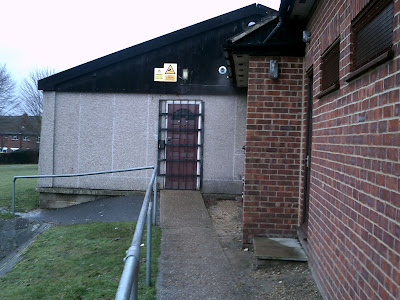 Past the brick structure we look toward the pitch, from the outside, once more. 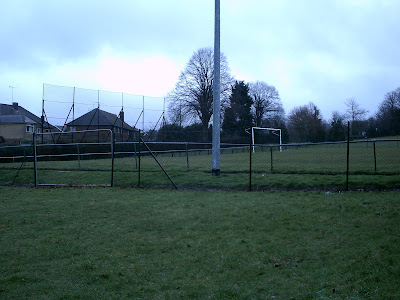 Pitch rail along the side, looking across the pitch, toward the goal. 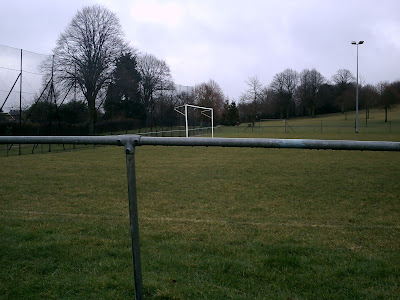 Here we look down the hard standing along the side, back to the club buildings. 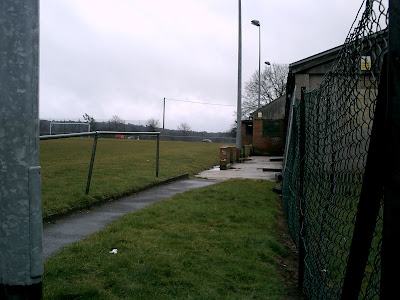 Another, better, view, from through the outer fence, behind the goal. 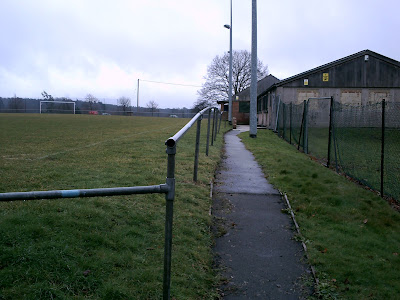 And here we see the hard standing behind the goal. 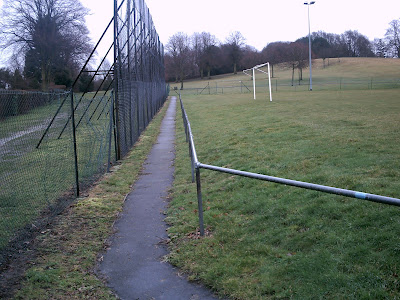 Further along we look over to the first side, & the club buildings. 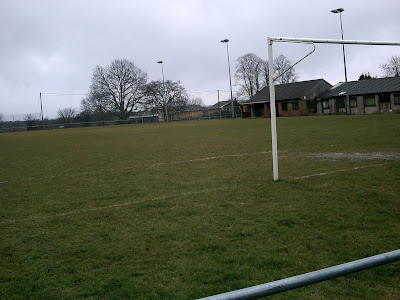 We're now at the next corner, & look through, to see down the path behind the goal. 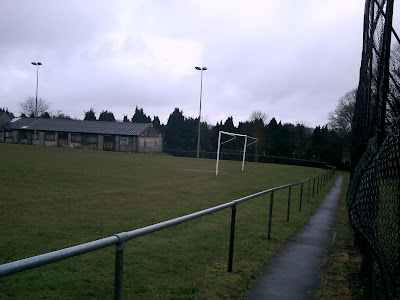 Along the higher far side is just grass under foot, with the rail alongside the pitch. 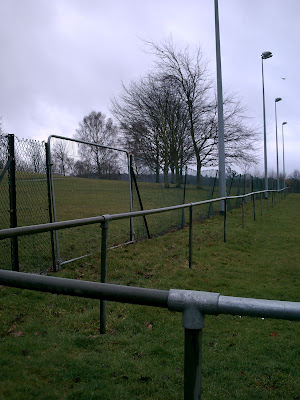 From the side we look across the pitch. 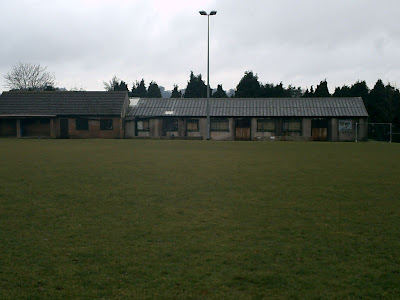 Behind the other goal it's hard standing once more for fans' to stand on. 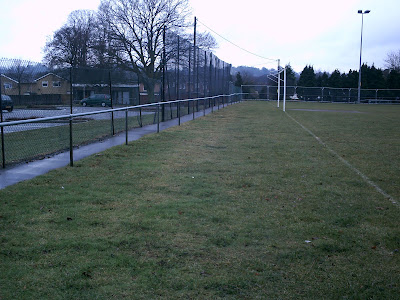 At this corner we get a shot of the floodlights, above the buildings, on the other side. 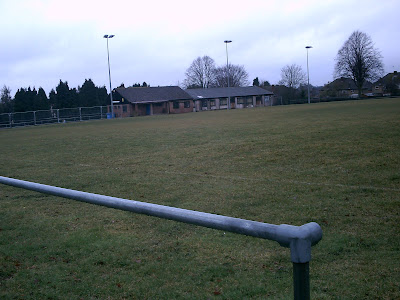 Outside the ground this park bench overlooks the ground. A good place to rest & watch a game on matchday, as there doesn't appear to be any seats inside. 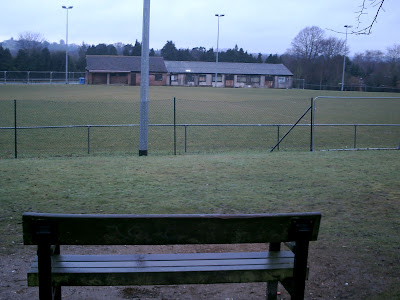 Finally we look down on the ground, from the top of the hill in the park. 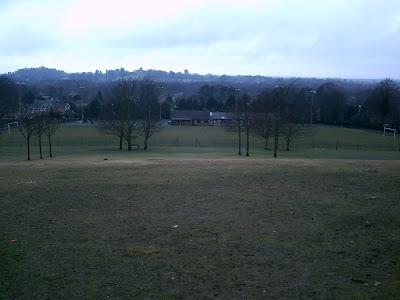 The facilities at Frimley Green FC have vastly improved over the summer of 2010. Extensive work has been carried out on the pitch, surrounding fence, inside and outside of the clubhouse/ changing rooms. I would invite anyone to come and take in a game and see for themselves.

Maybe the Hamlet might have a pre-season game there one day... ;-)