Ashford Town (Middlesex) is a much maligned ground. Unfairly so, in my humble opinion. Granted it's not going to win any awards, but it's got beautiful character in its own ugly way! As far as I'm concerned it's not the stadium itself that lets the club down, but 'location darling, location!'

It's a good half hour hike or more from the station, and it is set off the main road. Trust me, you need this sign on the busy road to spot the turning! 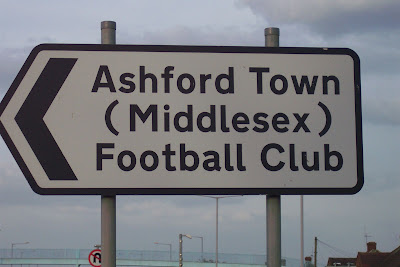 Once going along Short Lane you see this sign. 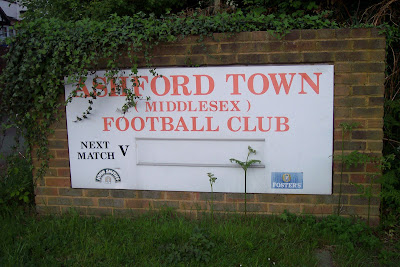 The ground is set back on the right, past the entrance. Here is the turnstile block. As I was taking this photo a club official, all blazered up, came out of the clubhouse & asked me what I was doing. Fully expecting to be told off & asked to leave, I explained I'd been to Bedfont Sports earlier, & that I was just a Dulwich Hamlet fan, who wanted to take a few photos of the ground. Imagine my surprise when he asked if I was Mishi! To which I replied I was. He said he looked in on here regularly & that I could take as much time inside as I wanted! Whoever you were..thank you for your kindness! 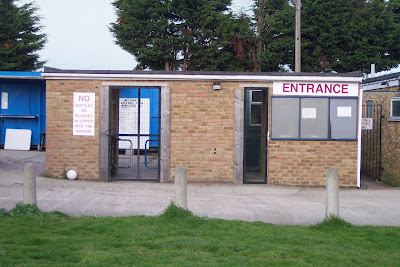 Outside, to the left of the turnstiles, was the standardised Ryman club sign. 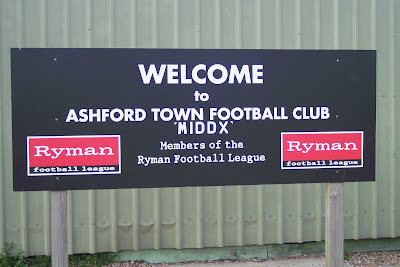 Once through them there is the team changes board, from their previous home match. 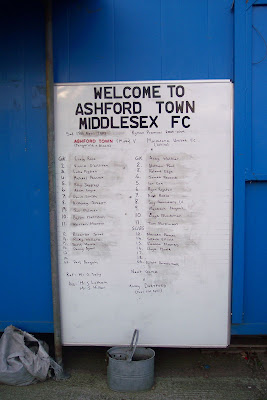 From this corner we're going to head clockwise around the ground. The first structure we see is this seating area. 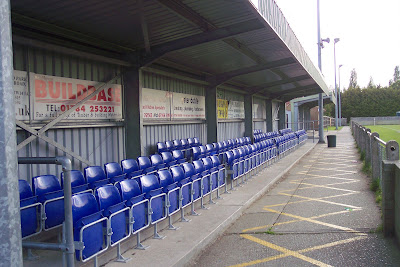 Looking back behind the 'ugly' open goal is the fuel tanks for the nearby Heathrow Airport. These are probably partly responsible for the 'ground reputation'. Past the low rows of seating we've just seen is this small covered terrace. 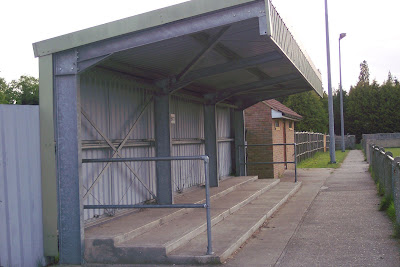 And then there's this modern toilet block. Which tells you what a decent club this is. I'm presuming these had to built for ground grading reasons, to have toilets for spectators inside the ground. they could have done it on the cheap with portakabin style bogs, as many clubs do. but instead chose to erect this proper structure. 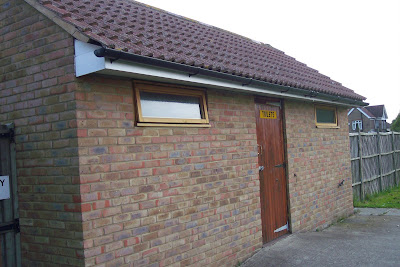 Moving on there is now only open hard standing to the far corner. 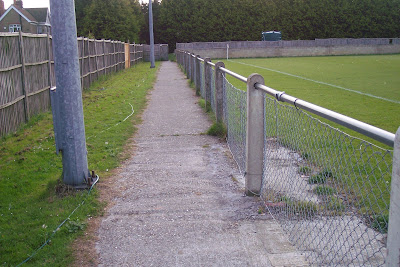 With not much more behind the goal, as we can see from here. 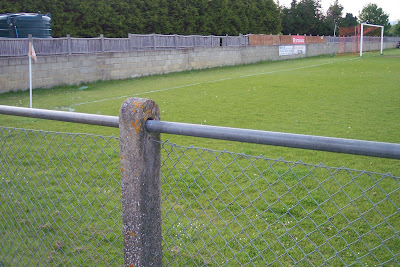 Before we move on round, one look back over our shoulder at the area we've covered so far. 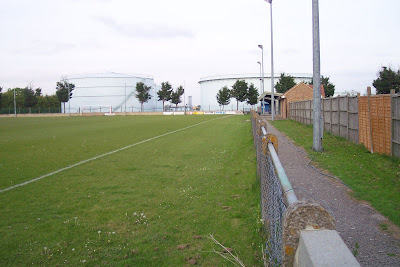 Now we'e going behind the goal. More open standing all along. But with a few steps of terracing in the middle, right behind the goal. 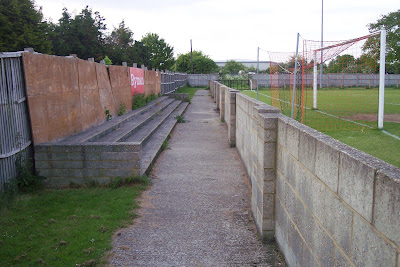 From here we look down the far side, and see a small, but smart, stand for the first time. 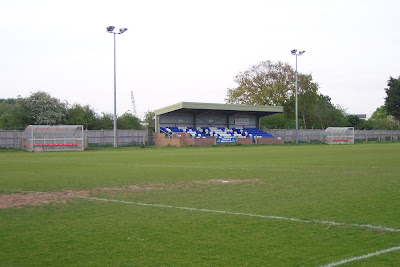 We will get there, but at the moment we look through the netting to the stand we've already walked past, as we came in. 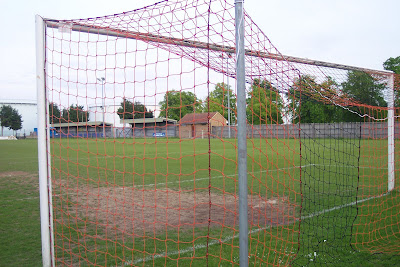 At the corner now, I do like this smart enough ground, with these corner flags in club colours. but what a let down! How tatty! Please buy a new set! ;-) 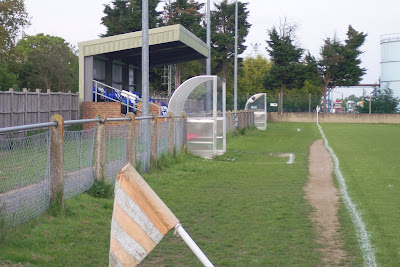 Open down this side as well... 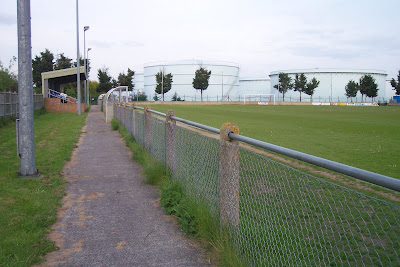 Until we get to the seats. 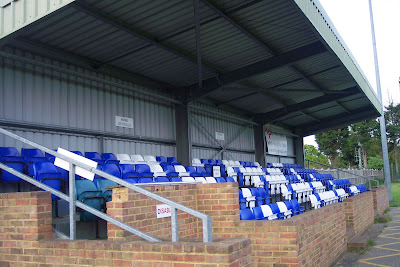 Going up in them we look over the playing surface. 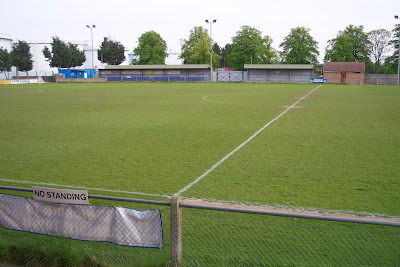 In the back row we look across the seating. Why the blue I don't know. Maybe tangerine was too expensive? 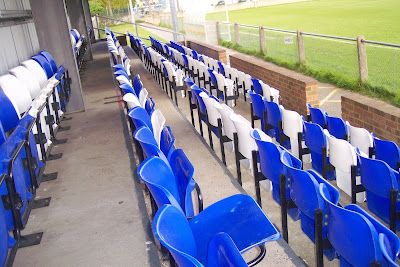 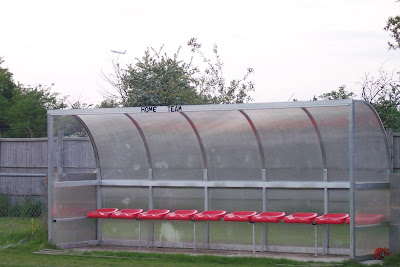 And now we're on the pitch itself. 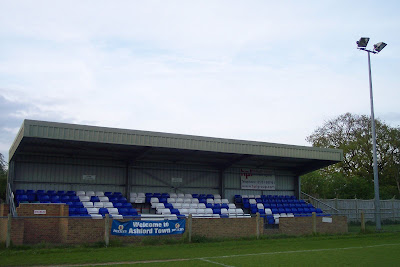 From the middle, looking directly at this stand we can see the club initials in the seats. 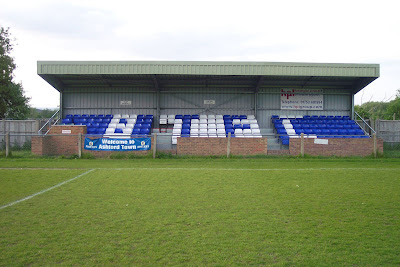 Ugly though they are, I can somehow see some beauty in those huge holders. how 'arty farty' is that? ;-) 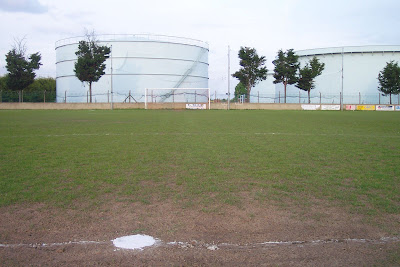 From the middle we look at the other seating area once more. 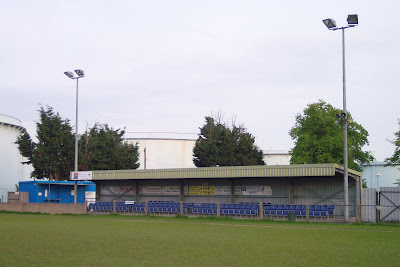 Now we're walking down toward the area behind the goal, here we look back at the lettered stand. 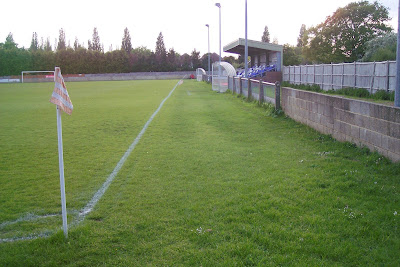 it's a tight squeeze behind the goal. Impossible to build terracing, which is why people sometimes are negative about this place. 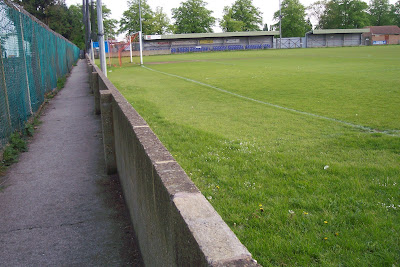 At the far corner, which is practically where we started, are these gates to the changing rooms. 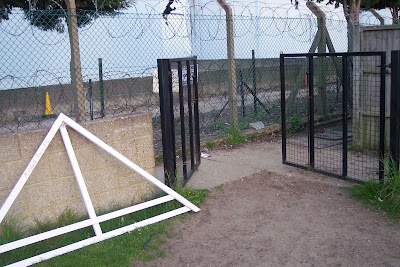 And so ends or tour of Short Lane. As we leave i notice this sign that says 'welcome'. Unlike some clubs they genuinely mean it, as on the few times that I've seen Dulwich Hamlet here they've always been warm to our fans. 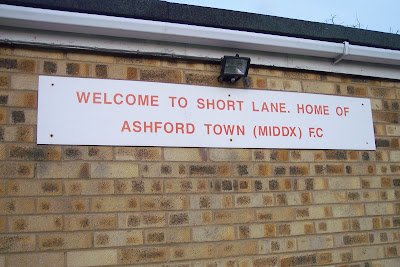 Hi Mishi. I can confirm that the offical you spoke to was our Secretary, Alan Constable. He, like me, reads a lot of the Fora, which is probably how he knew who you are!

I can also add a little to your commentary on Short Lane.

The reason the seats are blue, rather than tangerine, was that Spelthorne Council specified in the planning permission for the Main Stand that we couldn't have tangerine seats on aesthetic grounds!

It's a similar story with the "Tank End". The pitch was moved fully ELEVEN METRES towards the fuel plant so that we could get planning permission for the floodlights. The idea was that this would reduce the effect they had on the residents. The end result is that we have masses of space at one end and none at the other...

Glad you enjoyed your visit and excellent photos.