This is a somewaht unusual set of pictures, taken from my trip to Helsinki in July 2009. The Olympic Stadium was used for the 1952 Olympics, and is the national stadium for Finland. the stadium is also home to the excellent Sports Museum, & the hostel I stayed in.

I use the word unusual because you could not gain access to the ground, but could look down on it from the top of the Olympic Tower, and also see some of it through windows in the ground floor foyer.

In a few years time I hope to return & watch an international match here.

This is the Olympic Tower. 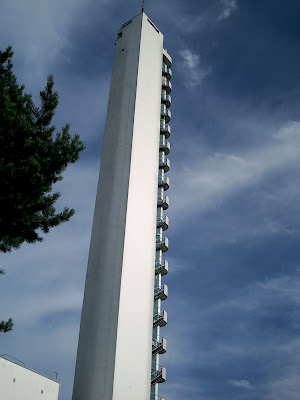 A map of the stadium, and surrounding sports facilities. 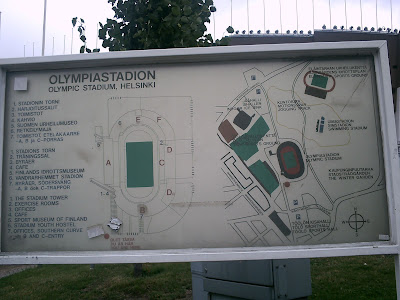 The famous Olympic rings on the tower. 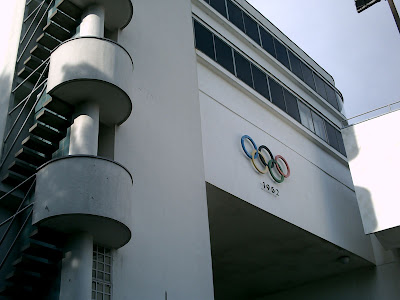 Here we see the tower, and the outside of the stadium. 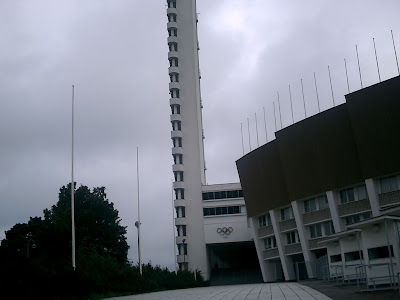 From outside the stadium is the same, like this, all the way round. 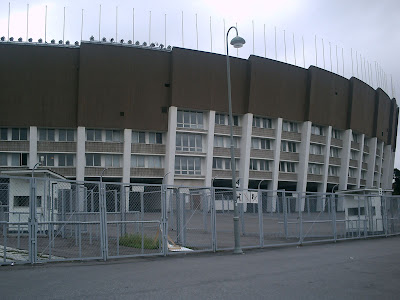 There are a few photos on display near the top of the tower. Here is an old picture of the stadium in its prime. 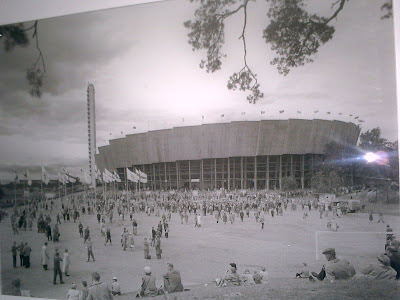 This is the tower again, looking up the steps. Thankfully there is a lift inside to the top! 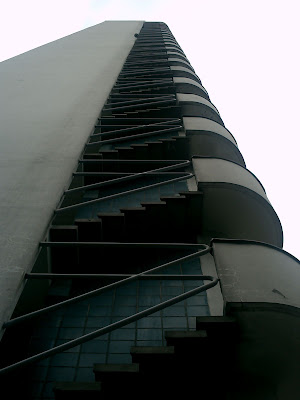 Another old photo from the display, showing a packed stadium, it gives a supurb overview. As you will see I was only able to snap parts of it. 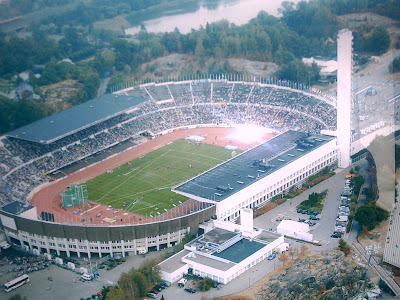 We are at the top of the tower now. Here we see the open upper part of the ground, with the city behind. 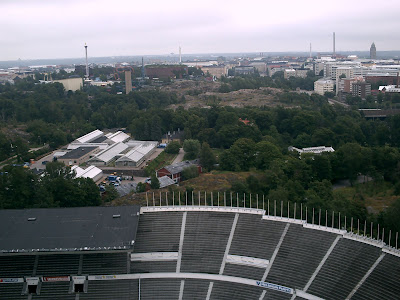 This is the covered stand opposite the tower. 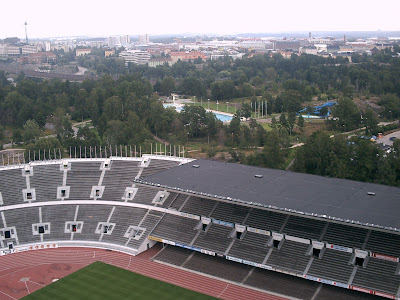 Here we look behind, catching the Finnair Stadium. The pitch behind it, to the left of the sportshall, is where Dulwich Hamlet Supporters' played our HJK Helsinki counterparts in July 2008. 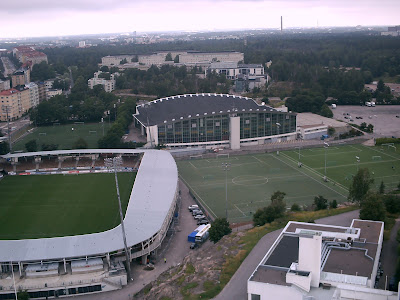 Here we look down on the end with the big scoreboard. 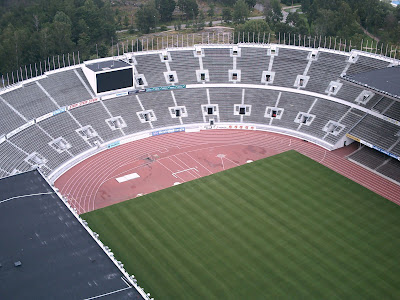 And opposite one more to that stand. 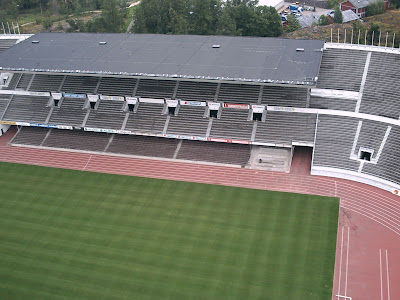 The open end to the right of the tower. 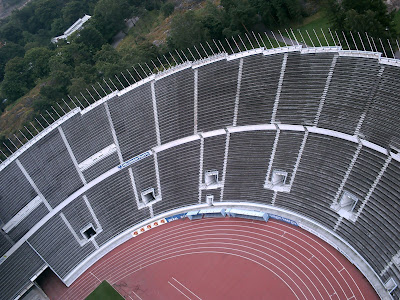 And a zoomed in shot of the scoreboard end. 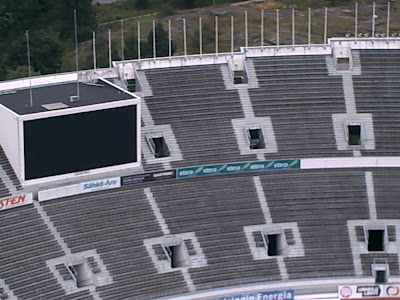 This was another photo from the small display, showing the ground from pitch level. 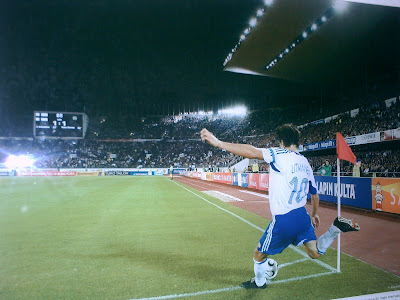 Inside the foyer were the results from the 1952 Olympics. 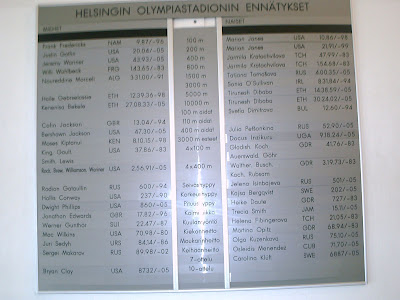 The following snaps were all through a locked glass door, and the windows next to it. This was the closest I go to getting 'inside'. 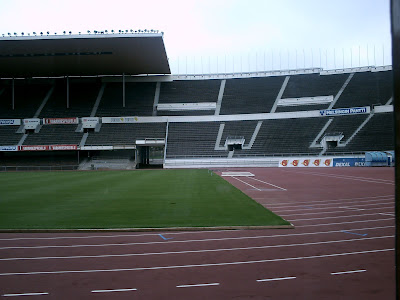 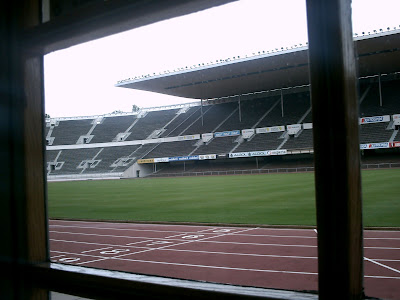 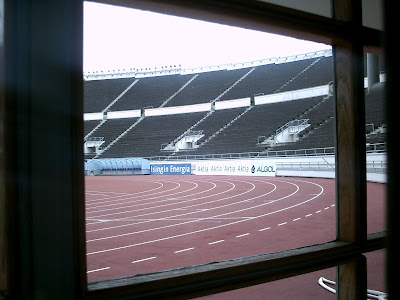 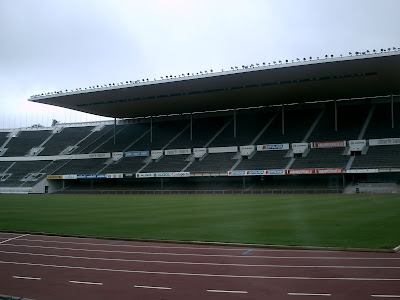 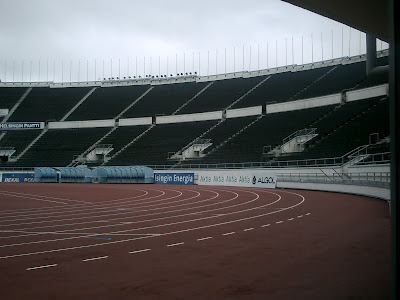