This is more of a quick 'glimpse' of Cowdenbeath, rather than a full tour, as I was only here for five minutes, wn route to Hill of Beath Hawthorn FC, thanks to my driver 'prorege' for stopping off here. This season they are playing in the 'giddy heights'-by their standards- of the Scottish League First Division.

Luckily the gates were open, but time was against me, so I couldn't do a full circuit, but you will get a flavour of the ground from these pictures. 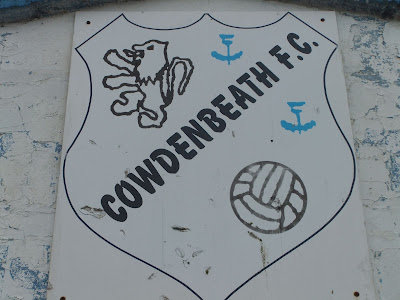 Here are the turnstiles, and when you clock those prices you can see why many Scottish football fans prefer Junior football, at a fiver to get in, rather than the much more expensive lower reaches of the Scottish League. 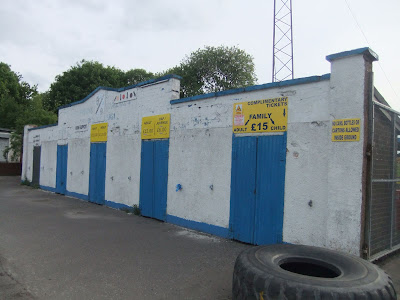 The ground is actually primarily a motor sports venue, with Cowdenbeath often playing 'second fiddle' to them. 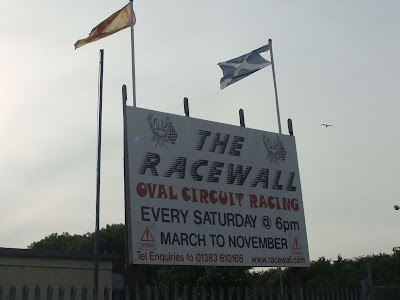 We can see the stands up ahead, on the right, but we're going to dash up the steps, to the terracing. 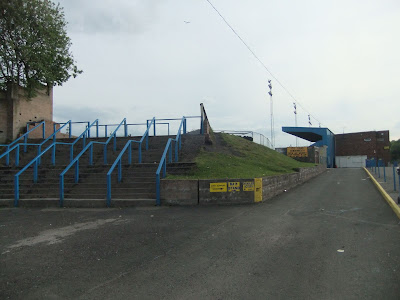 Here we see the seats from the corner. 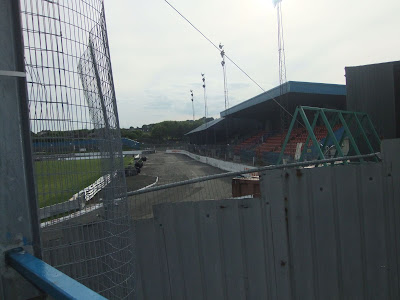 Grass banking behind the goal, with a path high above the track & pitch. 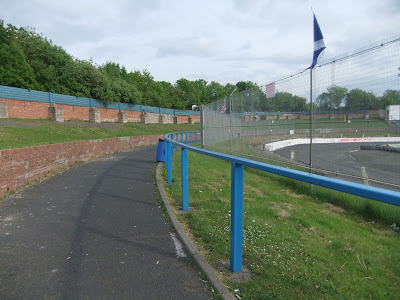 Open terracing along the side, taken through the mesh fencing around the track, hence the fuzzy black thing down the right hand side! 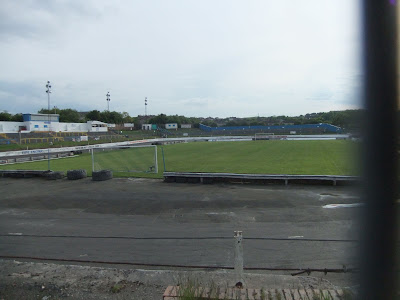 The banking curves round, and along the side you can see some terracing. 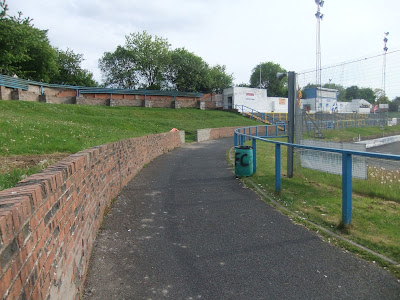 Here we look behind us, at 'our' end, you can see how far back it is, as we can't even see the goal. 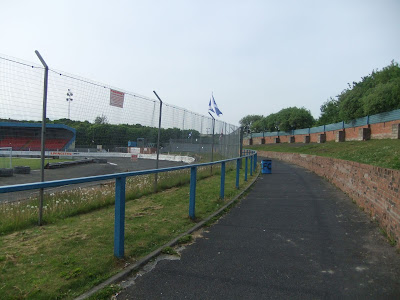 On the banking along the side we look toward the open terracing. 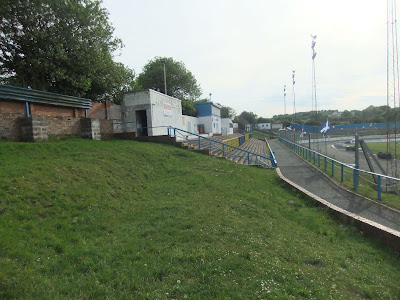 From up along the corner, but on the side, we get to see one of the goals at last. 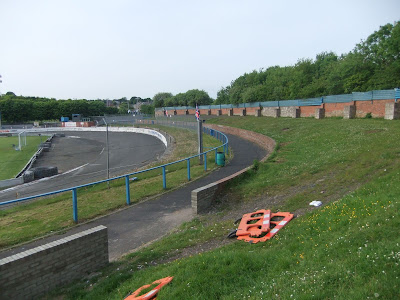 And from up here we look over the pitch to the two stands on the far side. 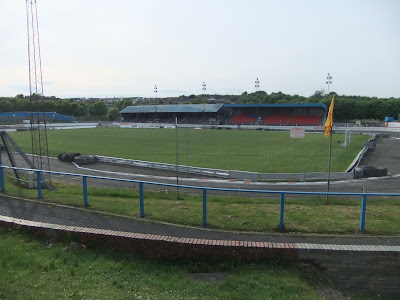 Here is a close up of the newer one. 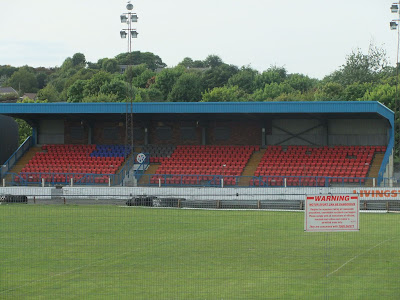 Likewise the older one. 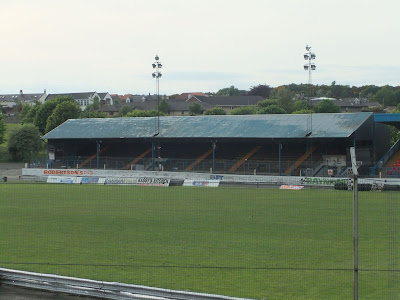 There is also substantial open terracing at the far end. 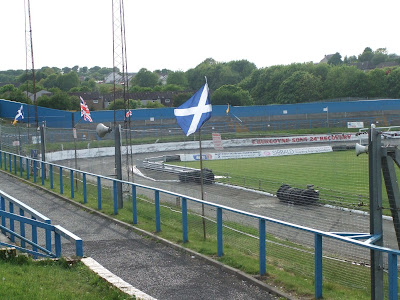 But, again, it is set a fair way back from the pitch. 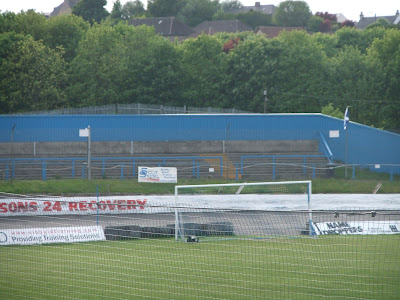 Here I zoomed in, to catch the corner of the terrace at the end, on the side we're standing. 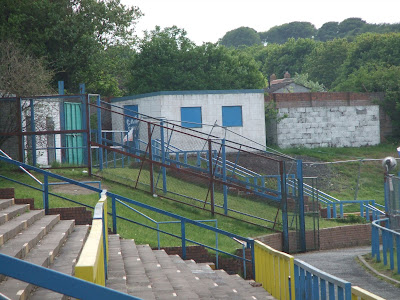 And anoher close-up, of where the two stands almost meet, on the far side. 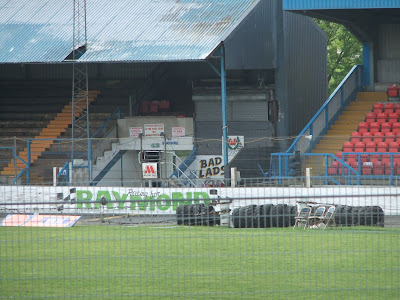 Time to go, this was a very brief visit, so we look back across, at the end where we entered the ground. 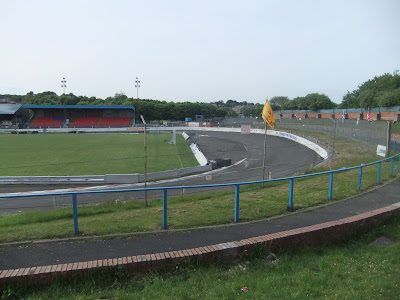 And, from the very back, I try a panorama of as much of the stadium as I can fit in. 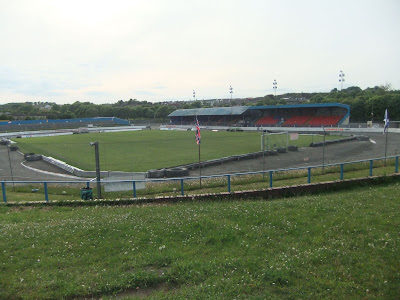 With the other side on show here. 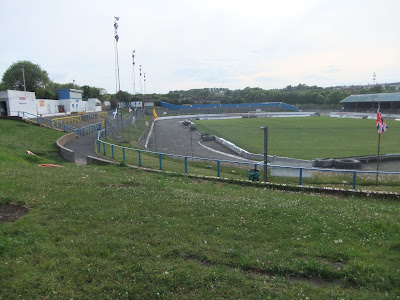 Back to the corner where we came up into the ground, & that's it I'm afraid. This is certainly a ground I'd love to revisit one day, not because it's a great ground, but because it's so unusual. 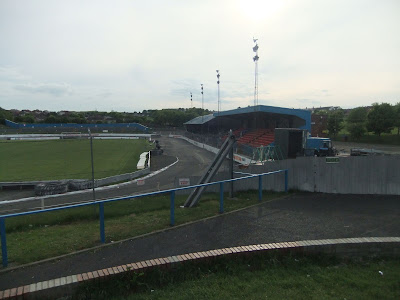 I can remember going to Central Park many years ago. The grass banks you now see were all terracing and there was a large cover at the far end. The new seated area is, l believe, replacing the other half of the old stand which burnt down. I can remember my Dad telling me that it had a capacity of nearly 50,000 in its heyday (which is huge when you consider Cowden is a village really) and was at one point considered for hosting Scotland matches. Gordon.

Thanks for the old info, Gordon. Always nice to get some background to venues. Many thanks.
Keep on looking in.