Totton & Eling play in the Wessex League Premier Division, & they currently play here at Southern Gardens, but not for much longer, with an imminent move to Little Testwood Farm. I never saw a game here, but took the opportunity to document the ground, as I stopped off on my way down to a game at Weymouth,, pre-season 2010. Some of the ground had already gone, as the move was so close. 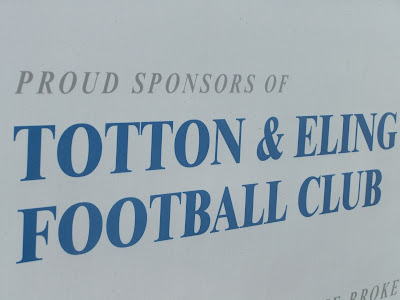 The venue is shared with the local cricket club. 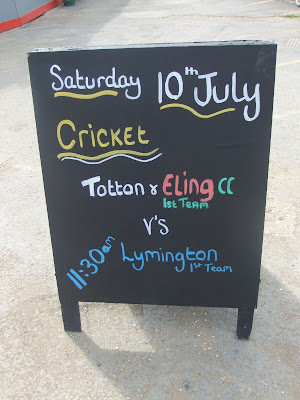 For some unbeknown reason I didn't take a snap of the approach to the ground. But the club house is in front of you, as is a small car park, from the road. To the left of the club house/pavilion was the cricket pitch, & beyond it is the football one. Here we are in the corner of it, there was no cover left anywhere, and it was just railed off with lights. We are going to start from this corner, & go leftwards, clockwise, around the pitch. 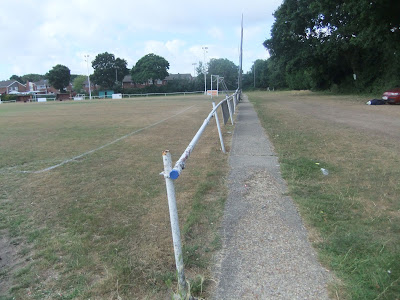 There is a gap in the railing here, presumably where the players come out of the changing rooms, which must be in the buildngs behind us. 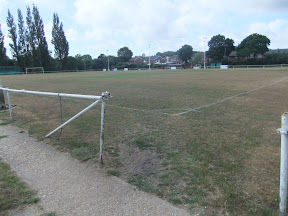 Hard standing down the side, with some 'junk' fenced off further along. With the path going around it, I am wondering whether there was previously a stand here? 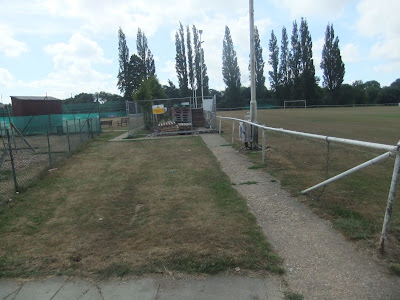 Prseumably 'this facility' mentioned on the funding plaque on the floodlight pylon refers to the lights themselves? 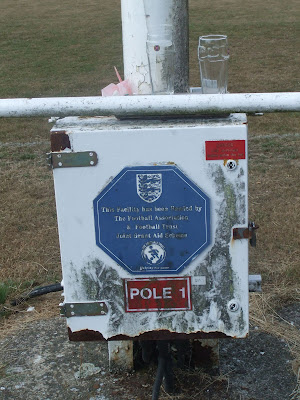 We continue round the pitch, you can see the boundary from the cricket field on the left, & the nets behind the goal. 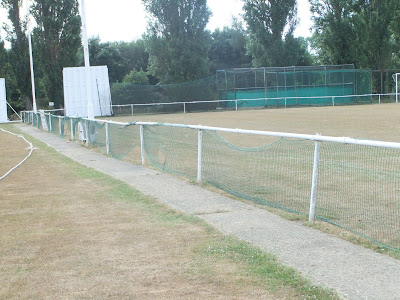 I wouldn't like to stand here during a game in case a 'six' hit me on the back of the head! 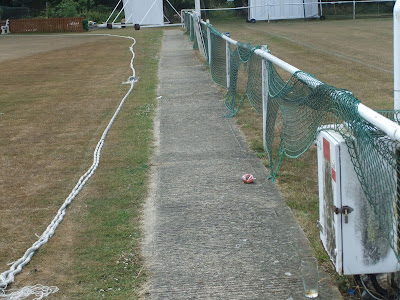 The path continues behind the goal, at this now extremely basic venue. 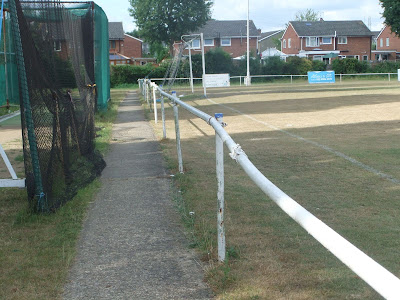 We look back down the 'not very' main side, and you can now see the club house/pavilion to the far right. 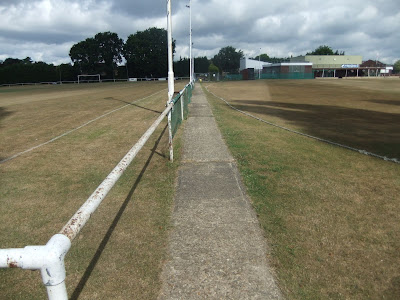 From behind the goal we look over to the other open far side, where the dugouts are situated. 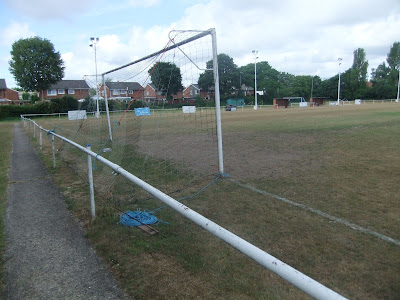 From behind the goal we look back to the side, for another angle, & signs of new buildings already going up on the right. 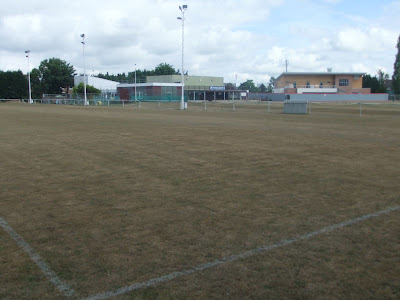 At the next corner now, we look over the very dry summer pitch. 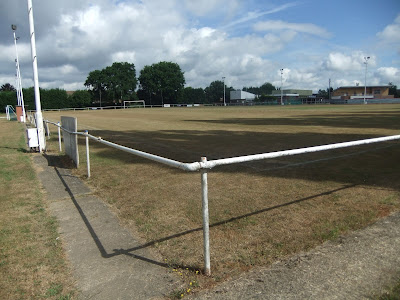 The hard standing continues along hte side, as we reach the back of the dugouts. 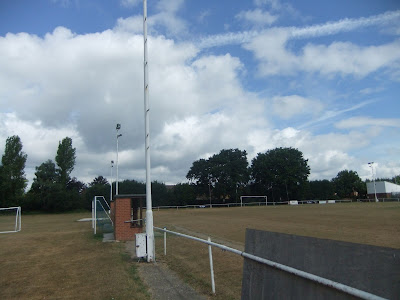 Beyond them is a patch of concrete. Again I'm guessing that this may have been a small area of cover, now demolished? 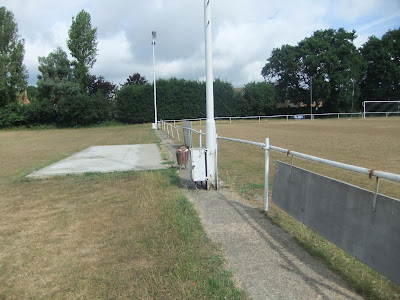 Walking back a few yards, this is one of the dugouts from the pitch. 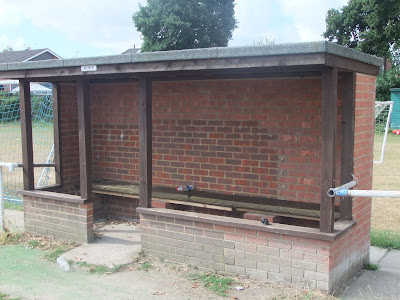 Here they are both in shot, with a training area behind. 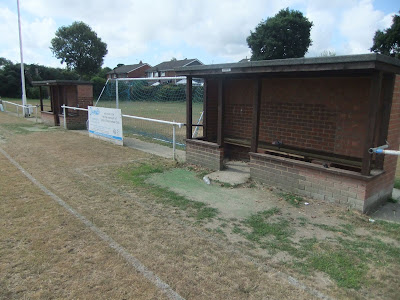 The main sponsors had one of the few hoardings around the pitch. 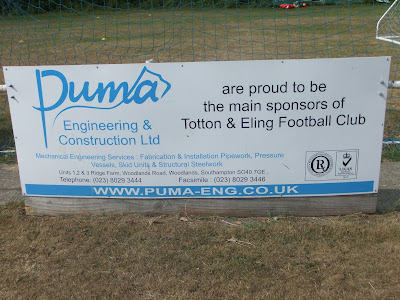 Now we're on the last turn, behind the goal, looking toward where we began. 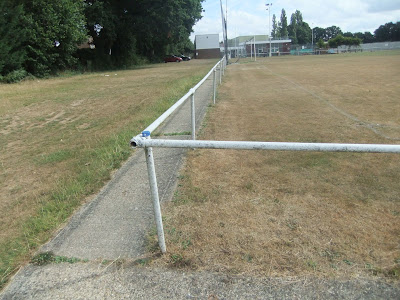 From behind this goal we look down the pitch. 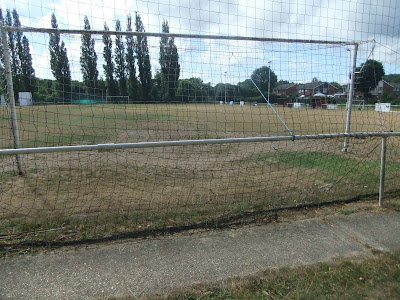 Before going to the corner, & dashing off. More stops from the train, at Brockenhurst & Dorchester Town, but they're to show you another day! 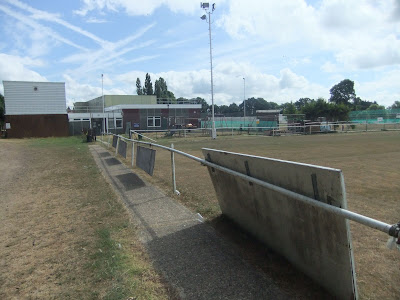