I visited Chipstead again this season, on the 21st February 2009, for another Dulwich Hamlet fixture. Once you've got past these photos you'll see the ones I took last season, & these new ones are to complement them, a couple are very similar, but they basically show the open sides that I didn't feature properly originally.

I've said it before, but why all clubs don't have a simple board like this I do not know. 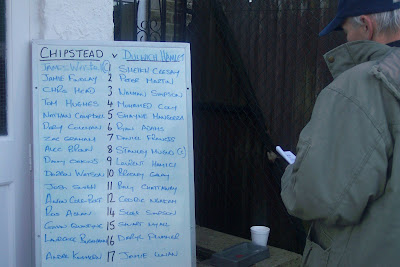 This is the end where my snaps, sort of, stopped last time. So I'm going to continue round the ground from here. 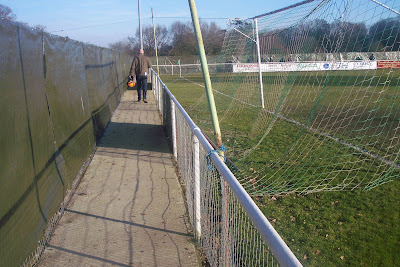 These are outer pitches behind the end we've just seen. There is also another behind the far side. 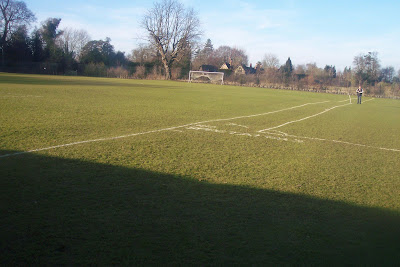 Looking back behind the open end. 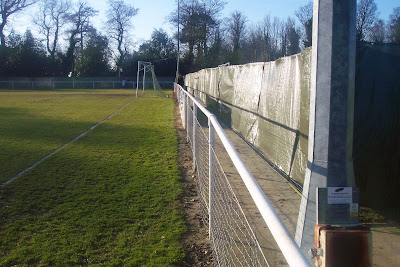 And so down the far side. I would guess I 'ignored' it first time snapping, because I thought there was nothing worth taking pictures of. 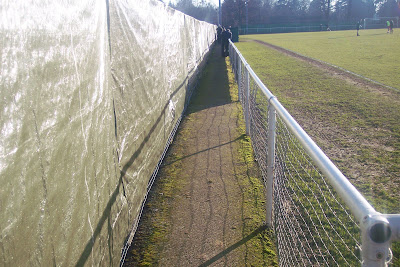 Half way down, going past the dugouts. 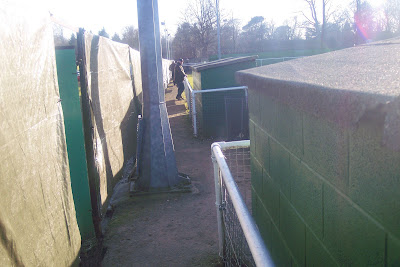 Standing between them we are directly opposite the stand. 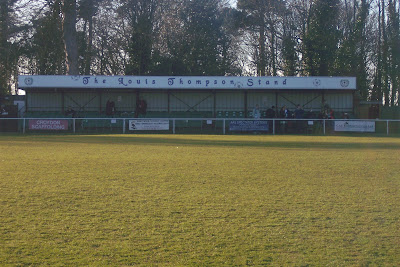 From the corner we look behind the goal, where there is some shelter in the other corner. 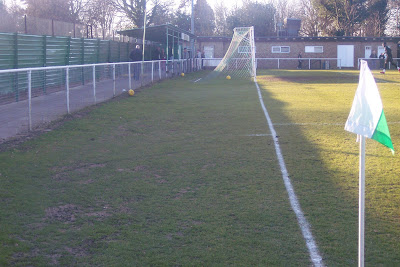 The same spot, but looking right along the standing area. 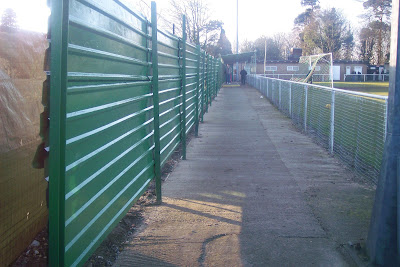 And closer to the covered section. 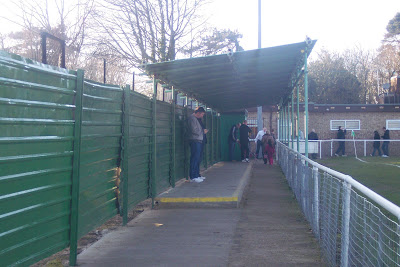 Another angle of the stand. 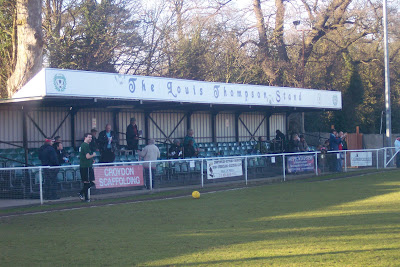 And from the corner we head towards it. 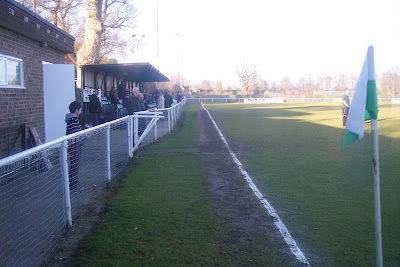 But not before looking back at the covered area again. 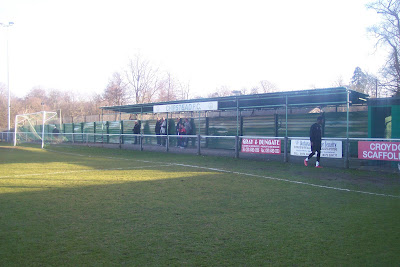 It's half time, so I can encroach onto the pitch to get another shot of the stand. 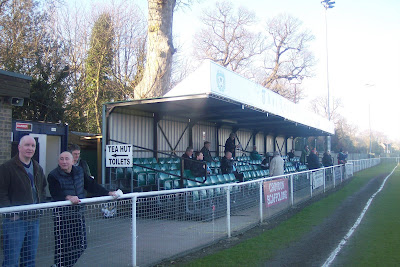 A nice sign, and-as a bonus- a home fan stopped his car as I was on the two mile walk back to Chipstead station, and both myself & Chris who was with me, were offered a lift from a total stranger! A most unexpected gesture! 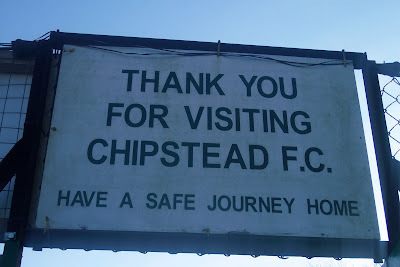 And now we're back to what I originally published about the Chipstead ground...

Here are some photos taken at the High Road, home of Ryman Division One South club Chipstead, last season. There are not many by my standards on here. But 'in my defence' they were taken before I really got into the swing of taking lots of pictures when I go to grounds for this site! No doubt if I were going there tomorrow I'd take twice as many. Still I hope these give you a 'flavour' of the place.

My first visit here was at the very beginning of the nineties for a very much 'political' youth team match! It was Dulwich Hamlet Under Eighteens away to their Chipstead counterparts. This was in the Sunday morning Shirley & District League, of which The Hamlet youngsters were to finish as champions. But that season a midweek team had also been entered into the Southern Youth League, run by the Senior Section. The Sunday side came under the auspices of Dulwich Hamlet Junior Football Club. The manager brought in for the midweek side had overlooked all of the DHJFC players, and brought in Sunday players from the likes of Chipstead & Palace Guard among others. Sides who were no match for the Hamlet on Sundays in the Shirley League, but for whom the financial backers of the midweek side conveniently had their sons playing...
So this was a fired up Pink 'n' Blue side who had a point to prove against a number of Hamlet midweekers, who plyed their trade for Chipstead at the weekend. Final score? Chipstead 0, Dulwich Hamlet 7! Still one of my sweetest Hamlet matches ever watched! That Sunday side was special, & if they had made up the bulk of the midweek side the Southern Youth League championship would have been in the bag, I still have no doubt about that!

The High Road is a fair trot from Chipstead station, a mile & and half to two. Not that far a distance, but it's up a hill, and there's no pavement for a fair part of it. This really is 'sticksville'! But despite that the walk's not a bad as people like to make out, so don't let that put you off a visit, even for midweeke matches, when it is rather dark, with cars speeding past. But be careful & you'll be ok! 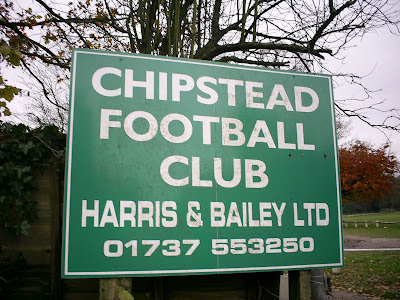 The entrance block.
To the left of this is the clubhouse, small but friendly enough. 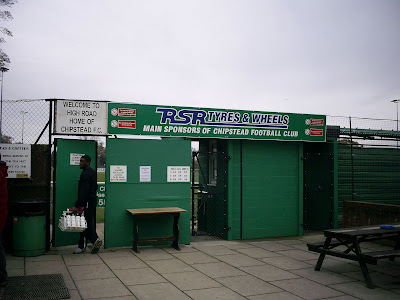 This came out a bit blurred, unfortunately.
A list of First team club fines, pinned up on the noticeboard.
A rare sight in the Isthmian League.
Something which emphasises their homely village roots. 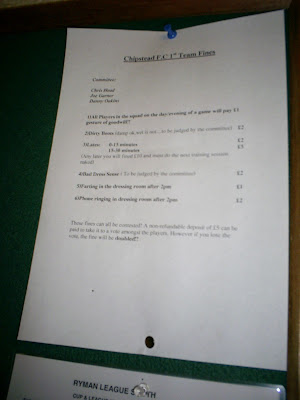 As you walk in at the corner, you can look across to the open
far side, and the also open far end. Behind that far goal is
a second pitch, used for training & their Sunday & 'A' sides.

Down the side, on the left, you can see the changing rooms, the
same building as the clubhouse; and the seats towards the halfway
line. 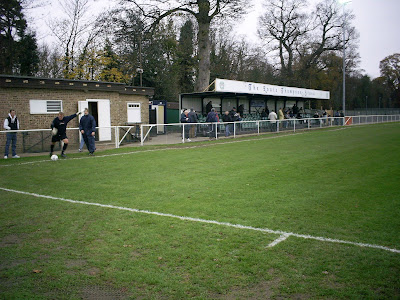 The players come out to a ''guard of honour' from one of their
very young sides. A nice touch, which gets the youngsters
involved in their club. 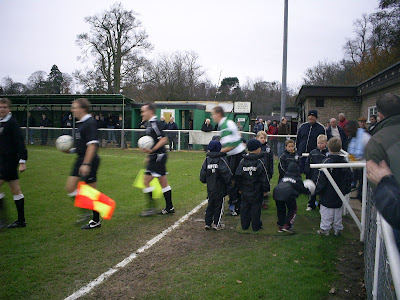 Tucked away behind the stand is the tea bar. 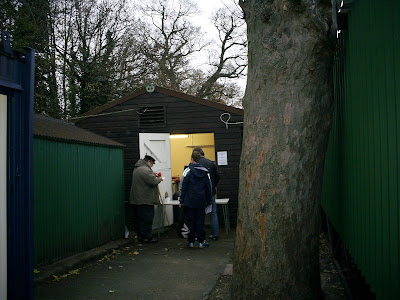 Just open hard standing behind the goal, the same along the
far side, which I never took any snaps of. 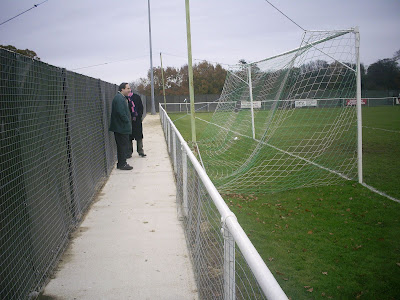 Looking back across to the 'built up' side, from the far goal. 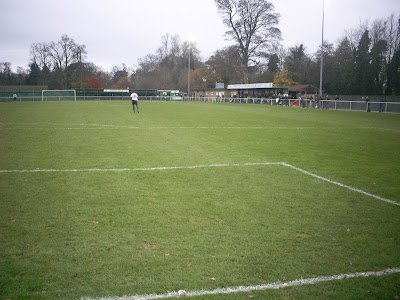 And walking back the way I took you, for this brief tour, the
covered end behind the other goal. 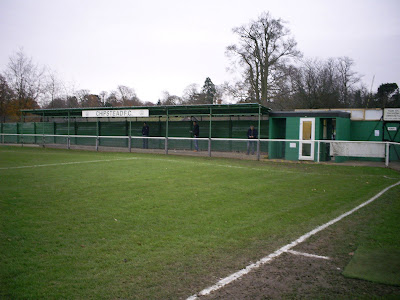 A tight fit, with only one step of terrace, but still adequate
enough for their crowds. 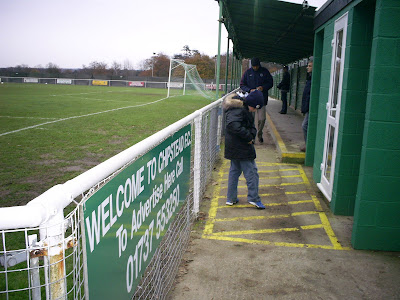