I visited GCO Bihorel in May 2007, for a Normandy Division D'Honneur game, which is a regional sixth level in the French pyramid. they are based in a suburb of Rouen.

The stadium is named after Marechal Leclerc, not sure who he is. 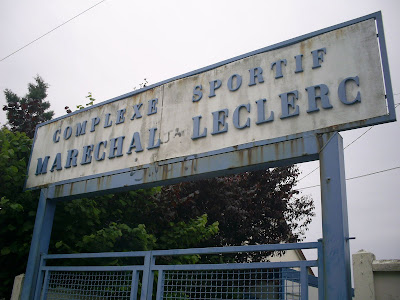 This is the road the ground is on. 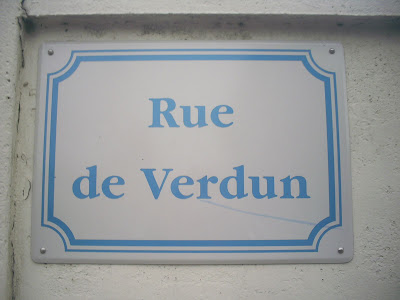 On entering the ground this is a tea bar, to the left, changing rooms behind. 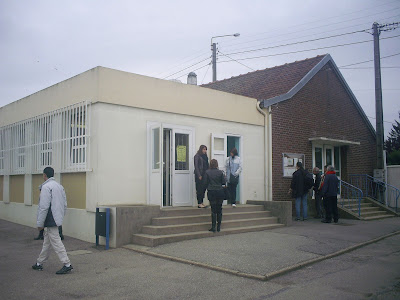 Here's some of the action from this end of season game, surprisingly entertaining, as I recall. 4-2 to the visitors. 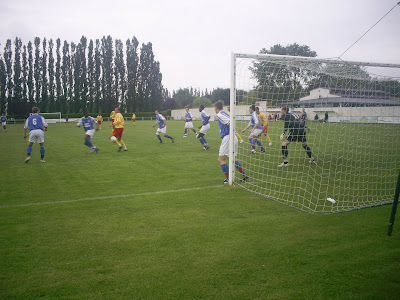 There wasn't a programme, but a league table was on the noticeboard, by the tea bar. 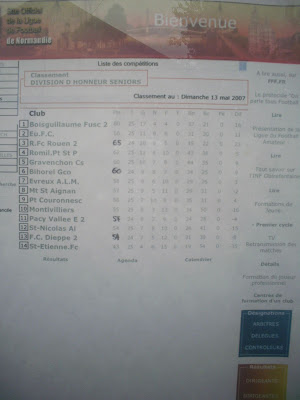 Here are some club stickers, stuck on a barrier. 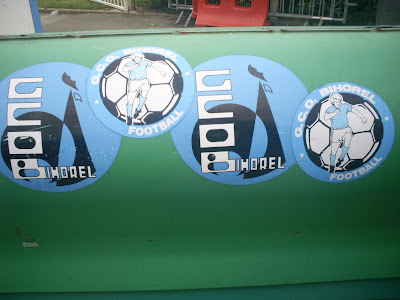 This is a shot inside the tea bar. 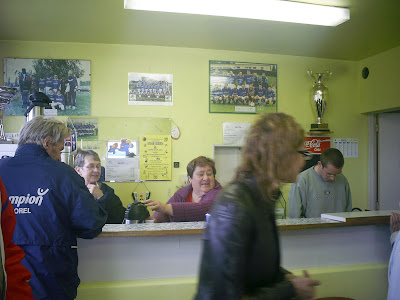 And this artwork was hanging on the wall. 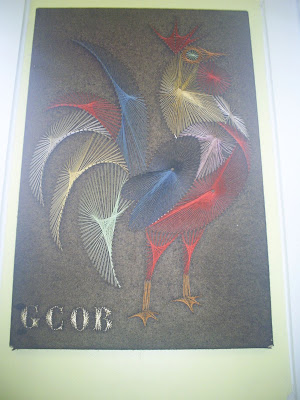 Various club trophies & a Calais scarf were on display. The scarf from when Calais reached the French FA Cup final, as an amateur club, in 2000. 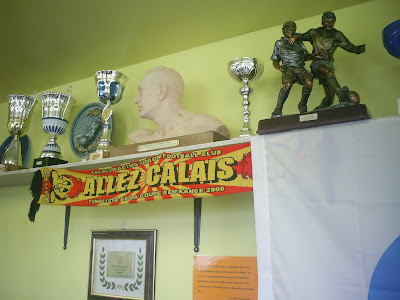 The players come onto the pitch from a corner. You can see it is open behind the goal, with the Rue de Verdun behind the white perimeter wall. 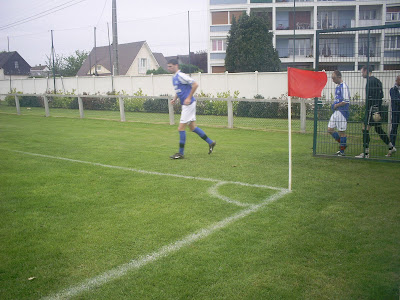 Here is the grass standing behind this goal. You cannot get to the side from the far corner, so we are going to head round the ground the other way, towards the main stand. 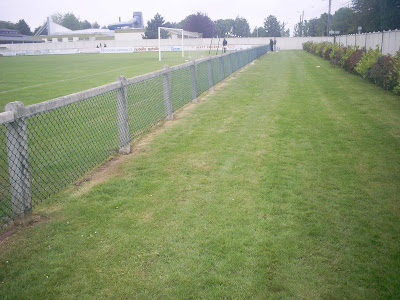 We can see it here, from behind the goal. 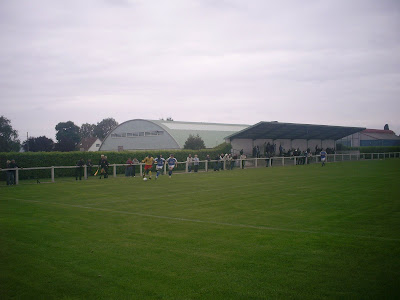 Bench seating. This is the away contingent! 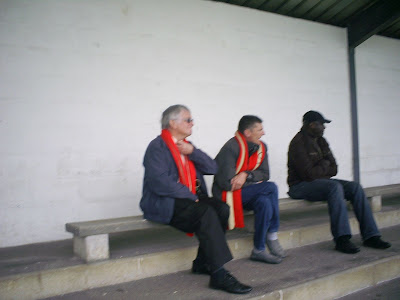 But there's not many benches, most of the stand being terracing. 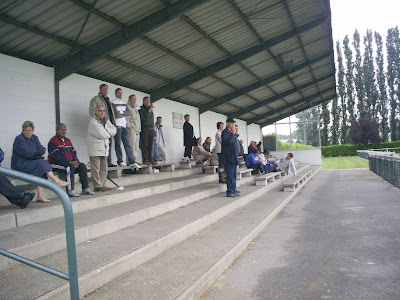 There is a plaque at the back of the stand. 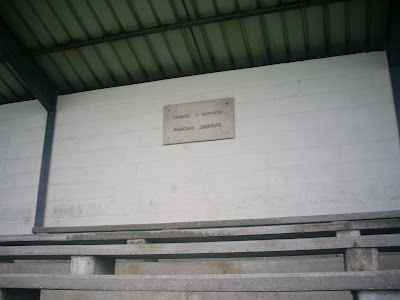 Here is a good side view of it. If this was an English ground I'm sure those windows would have been smashed by vandals long ago... 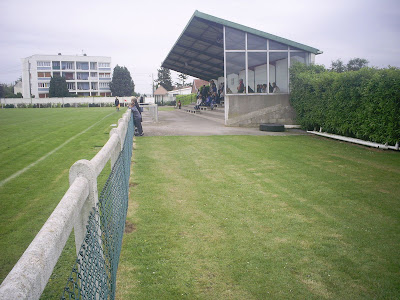 This is the name of the stand. 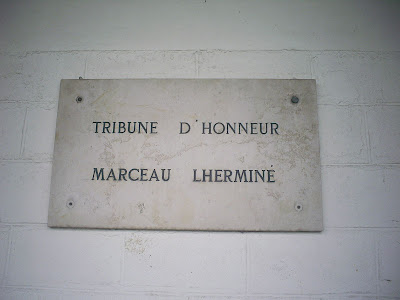 From in front of the stand we look over to the dugouts opposite. 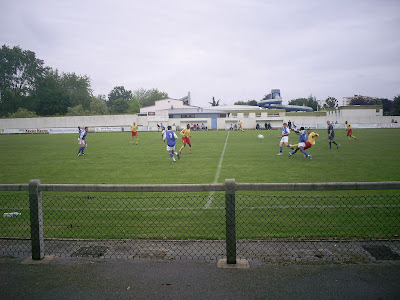 From the same spot we look down the touchline. 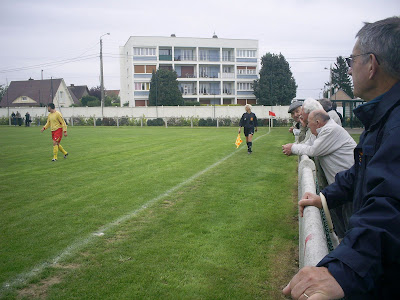 Another snap of the game in progress. 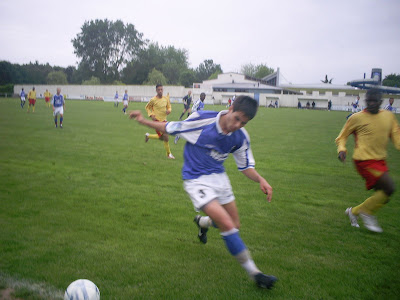 We're now down the fae end, looking across the touchline here. 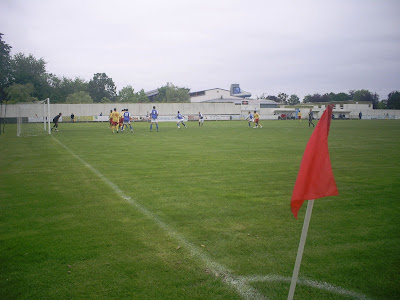 And from the same corner across the pitch. 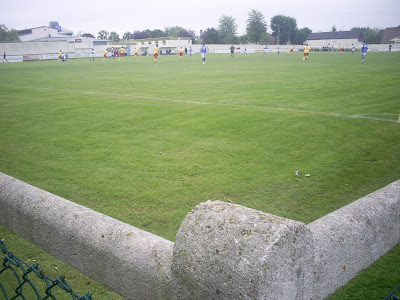 This is Paul & Mark, two fellow Dulwich Hamlet fans who were with me. 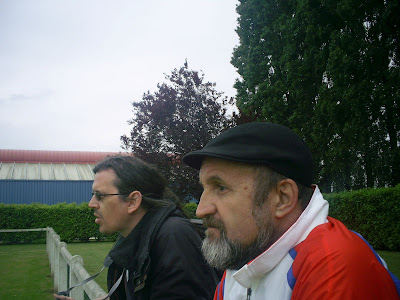 Moving along, we're almost behind the goal, a lone press photogapher in front of us. 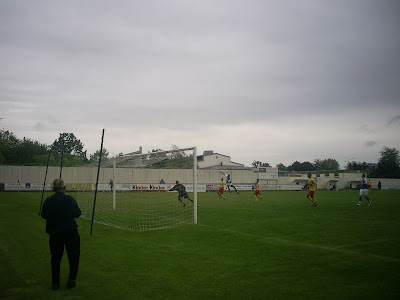 Past the goal now, we look back toward the stand. 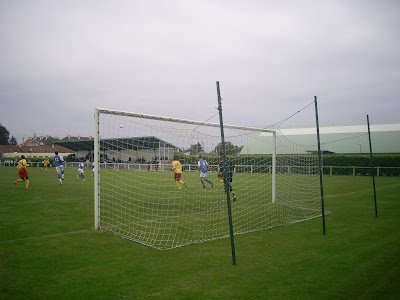 Down the side, we see part of the scoreboard, by the dugouts. This is as far as we can walk, as you can se it is railed off at the dugouts. 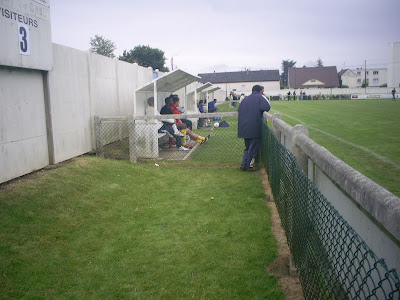 A fuller snap of the scoreboard. 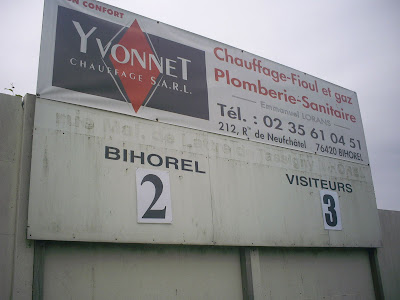 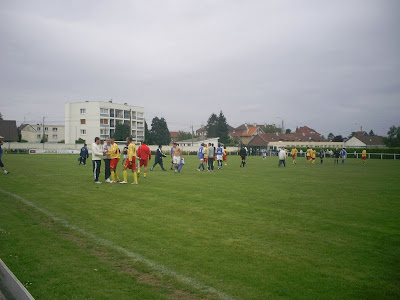