I returned to this ground in June 2009, sadly not to see a match, but to photograph the new concrete stand, that replaced the old wooden one, that has now been demolished, but of which you can see pictures of if you scroll down, after these new ones:


The gate I got in through last time was shut, so I took this one 'blind', by holding my camera up, and clicking over the perimeter fence. 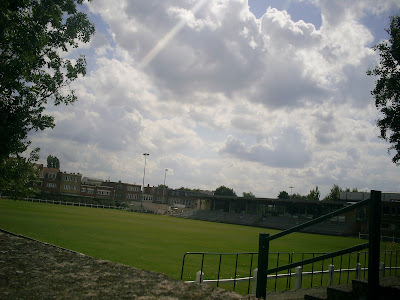 Fortunately gates were open at the other side of the ground. The new stand is almost finished, but not quite, as you see here. I understand it is now complete. 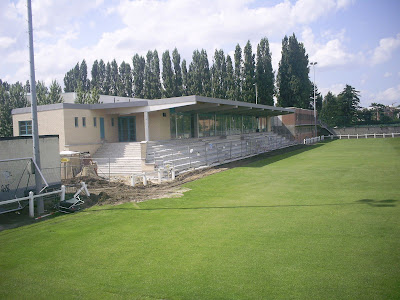 Similar shot, but a little closer. 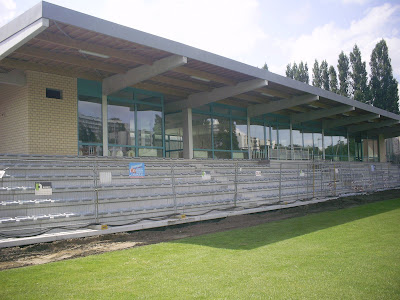 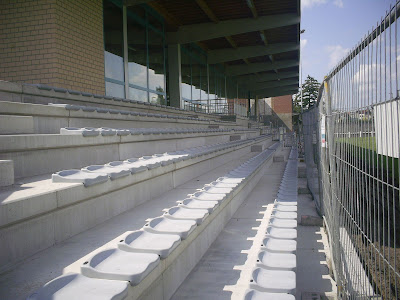 This is, presumably, the new players' tunnel. 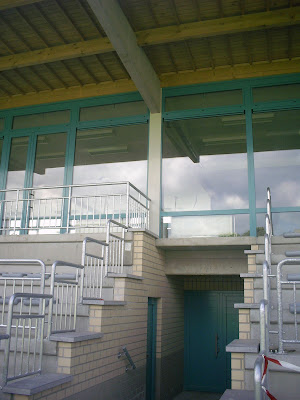 This section looks like 'open' dugouts at the front. 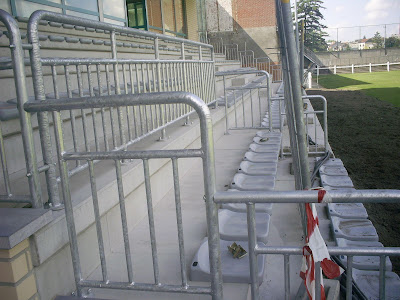 The new structure from behind. 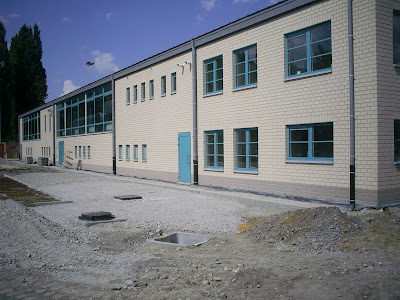 And, lastly, the clubhouse on the far side that I snapped previously, had this sign in front of it. Either it wasn't there, or I somehow missed it! Either way, at least I know what it is now. 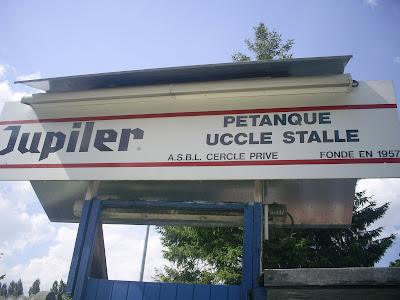 I took photos of Royal Leopold Uccle Forestoise FC in January 2008, when I was wandering around Brussels, after a couple of contributors to the Tony Kempster forum suggested it was worth a visit, after I ask for some reccomendations. I wasn't disappointed! And I am so pleased that I did. For the 'jewel in the crown' of this ground was the old wooden stand, which was demolished in the summer. On my next visit to Brussels I will try to get back here & take some pictures of it's replacement.

Here is the entrance from the road. Before even looking at the stadium I was already 'falling in love with it' because of these gates! 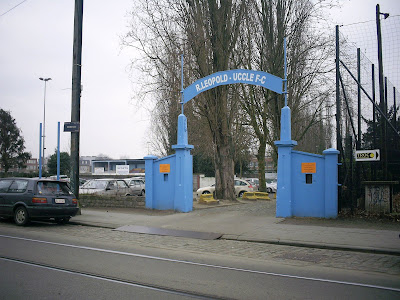 There was a poster on the wall for their next home game. 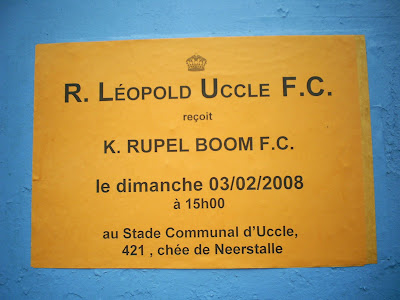 Through the gates, but outside the actual ground, was this war memorial. 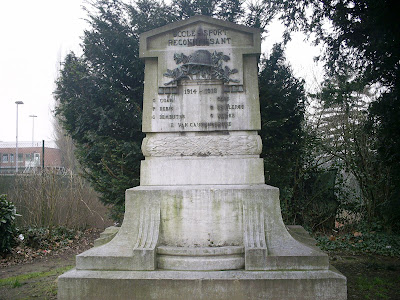 And another stone, commemorating a former club president. 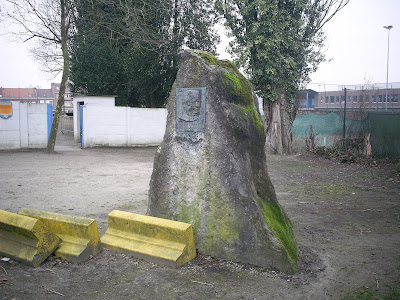 This is a close up of him. 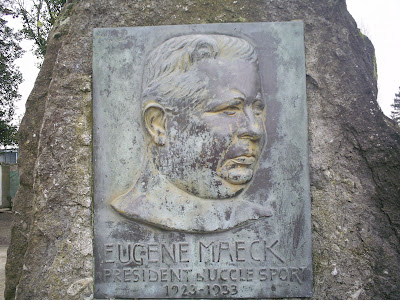 As we enter we are in a corner of the ground. Ahead of us is an old open terrace. But before we stand on it we turn right, behind the goal, to head towards the old stand. 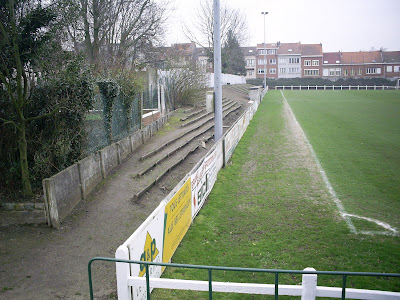 There is a small ,higherstretch of terrace here, with some park-style benches further along. The steps at the front continue all the way along. The building behind, along the side, was closed, but appeared to be the bar/changing rooms. 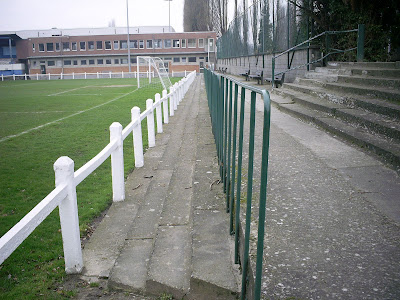 Directly behind the goal we see the beautiful old wooden stand. 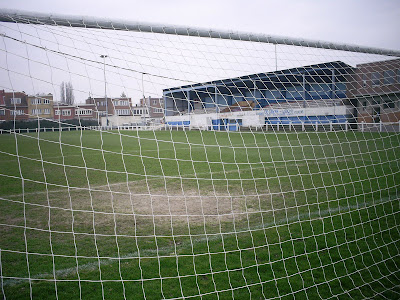 On reaching the corner we could climb some steps, up to the firt floor level of the brick building, and look across the pitch. 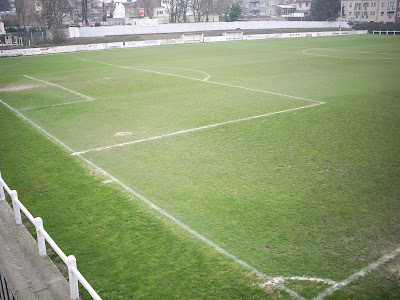 And we also look back, to get a look at the terracing at this end of the goal. 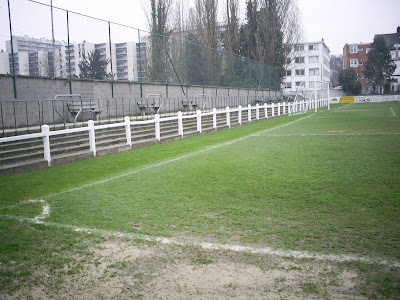 Here we are now in the old stand, looking pretty average with it's plastic seats, patched up I wouldn't like to guess how many times over the years. 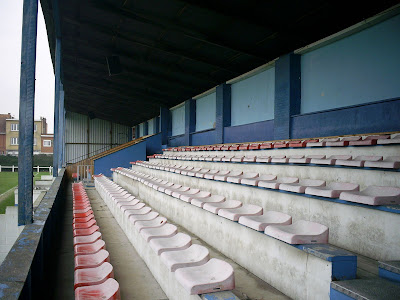 Still smart in places, despite it's shabbiness. 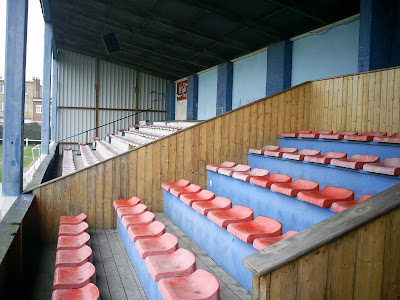 This is a nice angle from within. 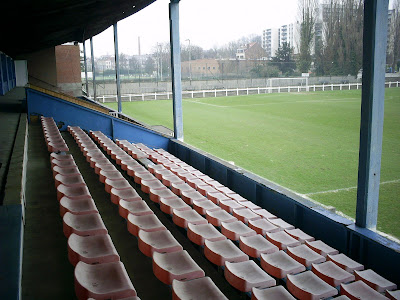 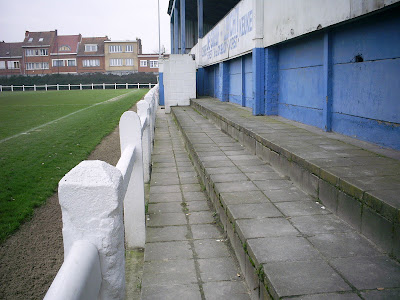 From this angle, behind the other goal, you really can appreciate this grandstand. 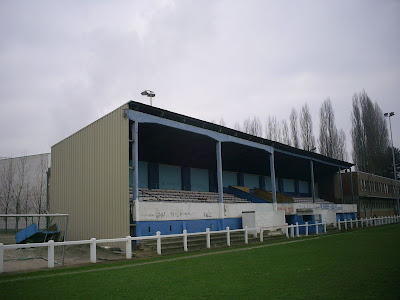 I suppose it would be possible to stand behind this goal, but not the most roomy of vantage points! 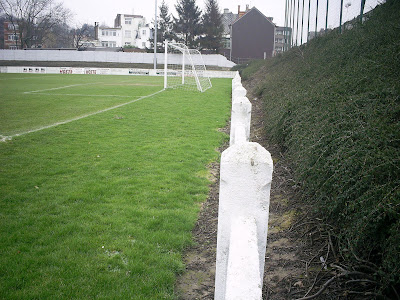 And from this end we see the bank of terracing down the far side, which we saw as we first entered. 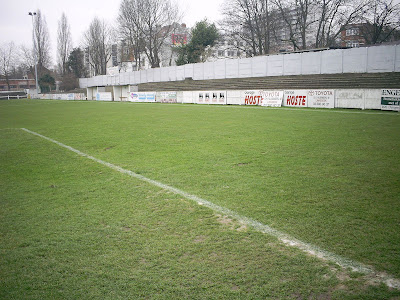 Not the safest, by English standards, but unspoiled by health & safety regulations. Marvellous! 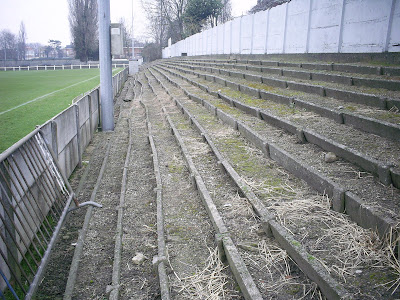 Tucked behind this is a small clubhouse. I'm not sure if this was connected to the football club or not, but I would guess that some fans would use it as a matchday wateringhole regardless. 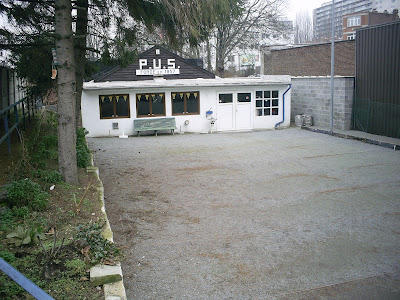 From the terrace, still at this end, we look across to the stand. Such a tragedy it's no longer there. 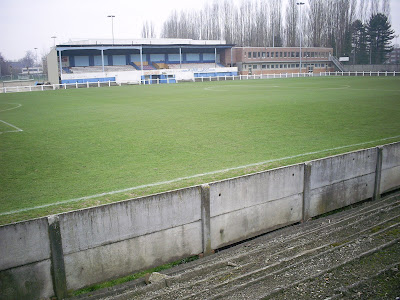 Here are the current dugouts, on the terrace side. 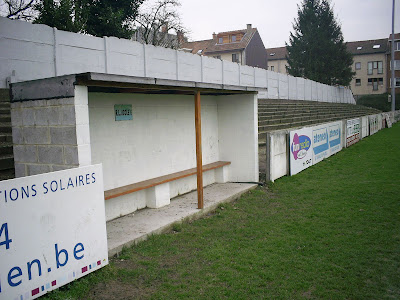 A welcoming club banner at the back of the terracing, hich is the last picture I have to show you, as we've now seen the whole ground, and thus overstayed our own welcome! 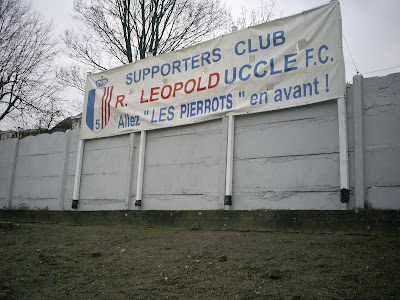