Union Saint-Gilloise have quite simply the most beautiful stadium in the whole of Belgium! It oozes history, & would romp into my top ten of al-time great grounds I've been to, if ever I bothered to sit down and list them!


This magnificent stained glass window of their club crest sits inside the main entrance. There were stewards on the door, but they kindly allowed me to take photos. 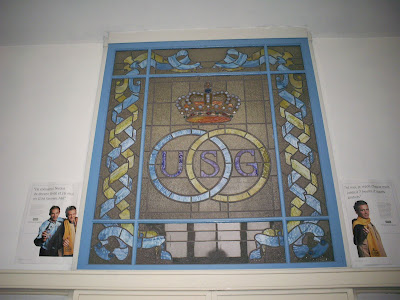 Here are the turnstiles, as we approached the ground. 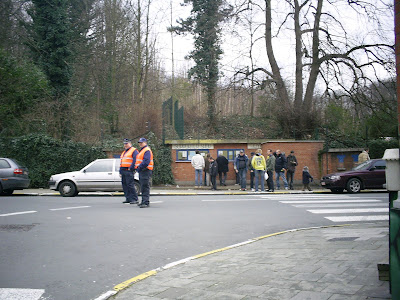 The main stand, which I believe is protected, as a listed building. 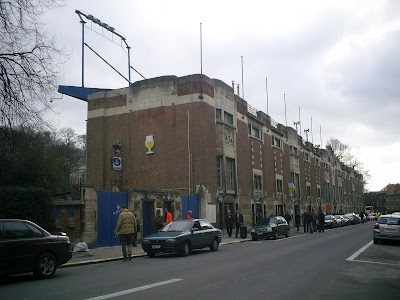 Here is a close up of some of the artwork on it. 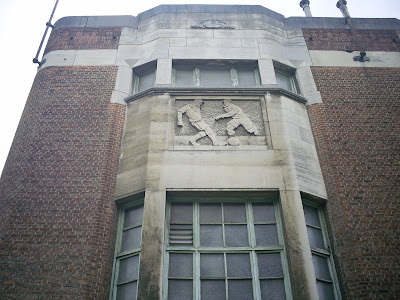 At one end of it is the clubhouse, this is my brother Ferenc standing outside. The day before we had seen UR Namur play, having played their supporters' team beforehand, for the Dulwich Hamlet Supporters' Team. 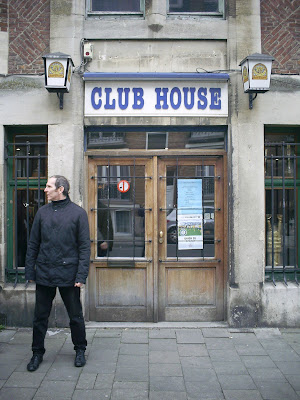 These are all part of the Hamlet 'Rabble': (left to right) Steve, Mick, Phil, Paul, Mark, Ferenc & Andy. 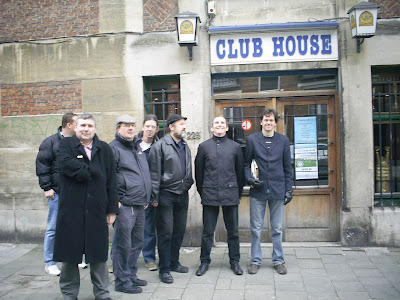 The beautiful frontage of the stand. 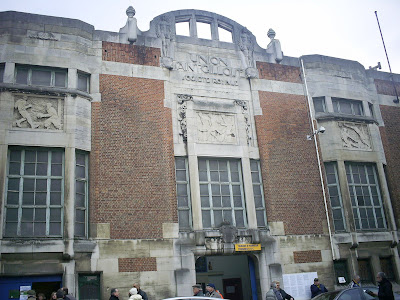 The stadium is named after this man. 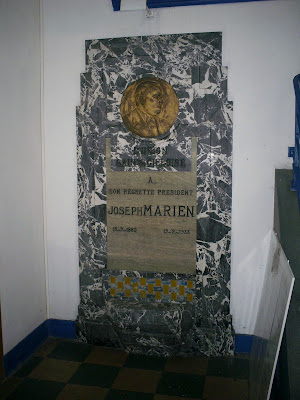 With another old dignitary remembered here. These are both inside the main entrance, along with the stained glass you saw earlier. 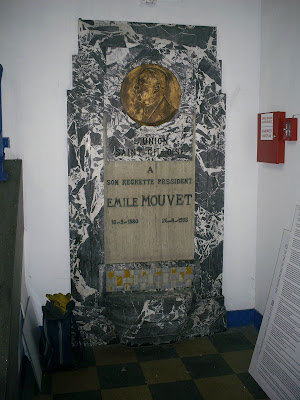 This is inside the bar. Unfortunately we didn't have a Dulwich Hamlet scarf to give them, but posted one to them a few days later. 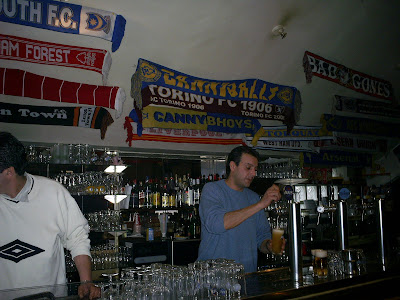 The 'Tate Modern' it's not! I'm sure there is some story behind this! 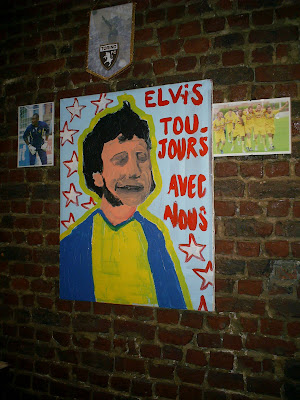 You can also get into the bar from inside the ground, this is just inside the turnstiles, and they clearly like to model it on the traditional English pub! 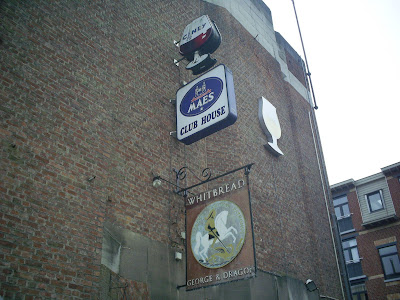 The main stand runs along the length of the pitch, with the away fans located at the far end of it. 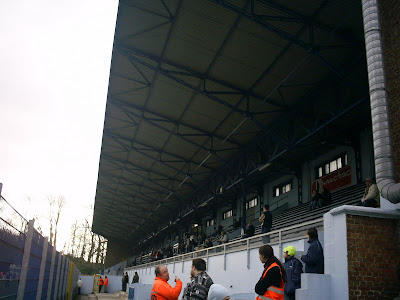 Here is another view of it from behind the goal. 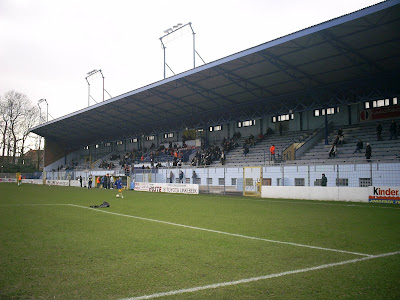 And along the far side is this large open terrace. 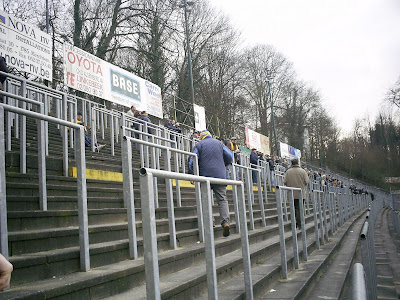 you cannot stand behind the far goal. There are some offices, with just open tarmac. 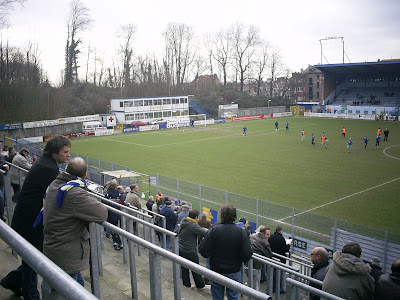 Behind our near goal there is no terracing, just an open path, with toilets and a small club shop. Behind the perimeter fence you can see the old banking from years gone by, that goes up into the surrounding wooded parkland. 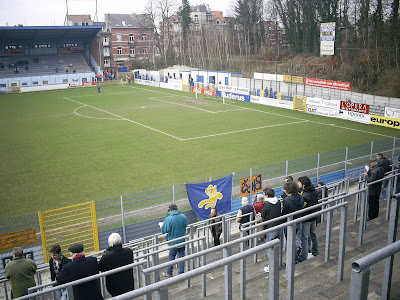 At the back of the terrace, in the middle, was this small beer stand, which was happily sampled by most of our party! 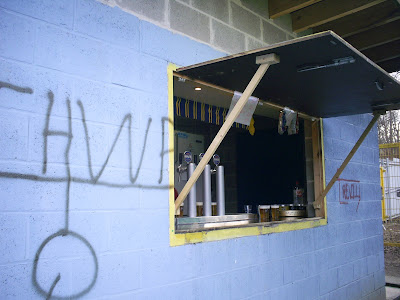 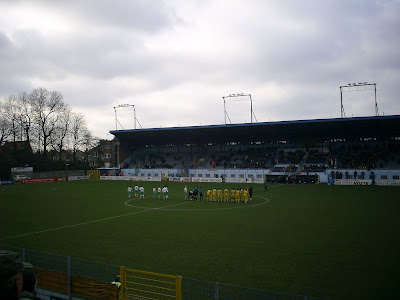 Another look at the terrace, with more people in it this time. 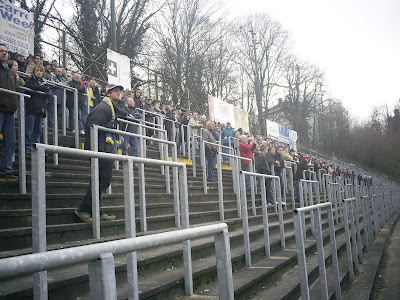 And even a four legged fan! 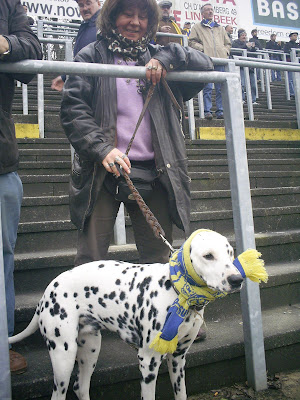 The scoreboard was perched up in the old, disused terraces. 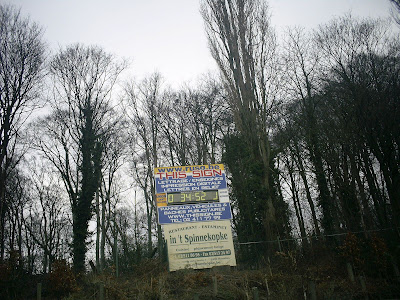 One man waves his flag. 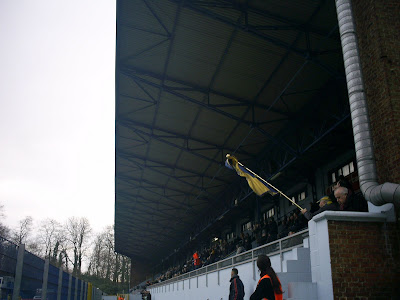 Here's another snap of the entrance to the terrace area, I'm not sure why I chucked it in at this point, but now it's here I can't be arsed to move it! 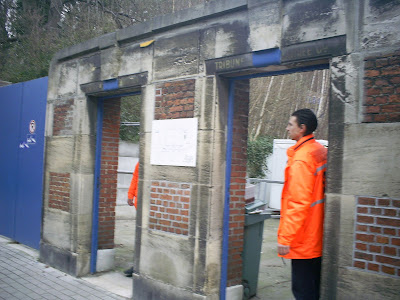 The toilet block behind the goal...and that man with the flag! 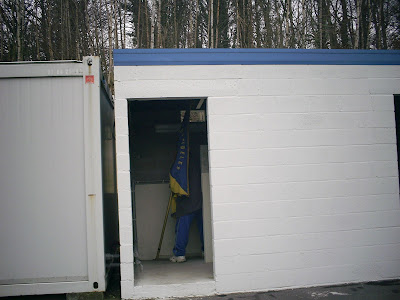 From the corner flag we look across to the large terrace. 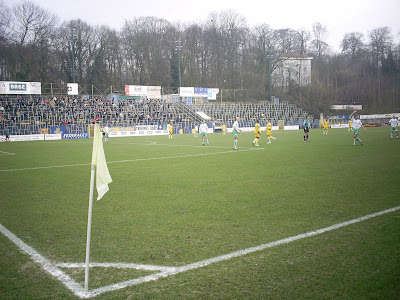 As does this old boy in a beret. 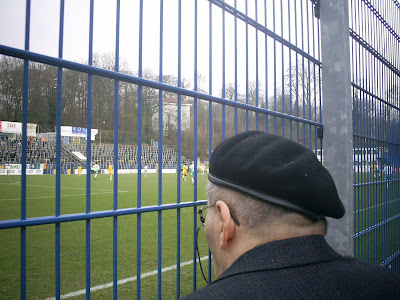 Behind the goal again here is the main stand. 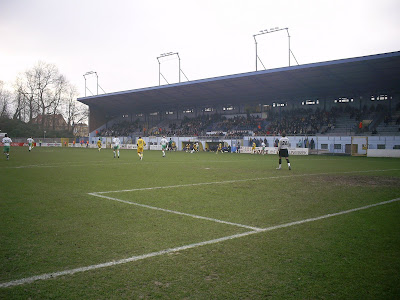 And we're now back on the terrace to watch the remainder of the match. 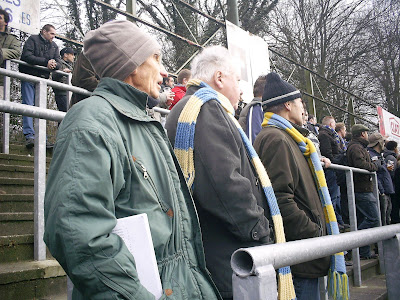 If ever you are passing through Brussels & get the chance to visit only one ground then the Joseph Marien Stadium must be the one.
Posted by Rabbler at 01:02

The painting is of much loved and missed Elvis Carolo, a legendary 'Union Bhoy' and Rock 'n' Roller, who sadly died in 2006.

Thank you, I will add in the link soon, I've only just noticed your comment.

I saw Union lose to Mechelen on Sunday.What a fantastic matchday experience.I stood with the Union Boys,a superb bunch.The fan with the banner in the photos died recently and was commemorated with his picture on the programme cover and a minutes applause before the game.So if in Brussels and you want a real football experience,take the train to Forest Est and then a 10 minute stroll to the ground.