Stansted play in the Essex Senior League. I just about made this venue in time! Not for kick off, I was a couple of hours early for that, but this was 21st October this year, & I arrived in the nick of time to get some half-decent snaps in the remaining daylight! Phew!

I gvae the ground a brief mention, as it was 'on my way' to the Czech Republic, where I was flying out to early the next morning, on one of my postings on the Tony Kempster forum:

"I left for Stansted, and got to their ground just before darkness, so got some snaps of their, basically one sided ground, but what a lovely one side! A delightful, old fashioned little wooden stand. And the old boy on the gate was one of the friendliest I met for a long time, probably because they get such small crowds he has the time to, I suppose! An easy 4-1 win for them against Barking, who brought about a dozen fans with them, I didn't count the crowd, but would guess about 35-ish. Which is a lot less than the average age of the visiting Barking fans, the majority of whom are over their half century mark. How sad they must be to see their club struggling near the bottom of the Essex Senior League, as I'm sure they recall FA Cup runs & an Isthmian championship, was it in the late seventies, or just start of the eighties? Fiver to get in, programme a quid, with a black & white snap of the stand on the cover. An easy fifteen minute walk to the ground, a bit uphill on the way there, but not too steep. " 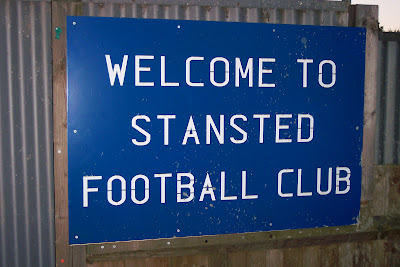 From the road there are some nice old gates as you approach the ground. 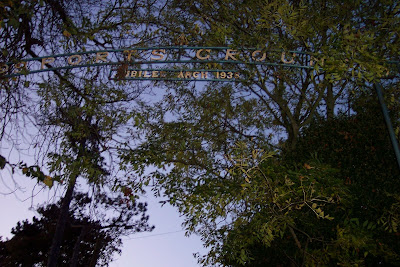 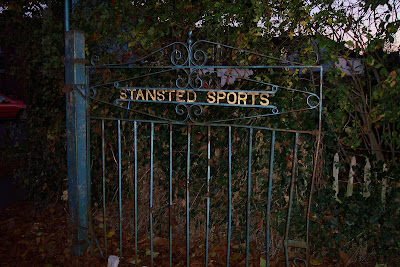 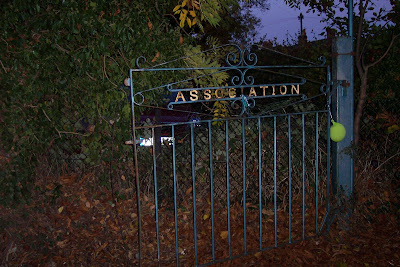 This is the way in, & where you pay your money. 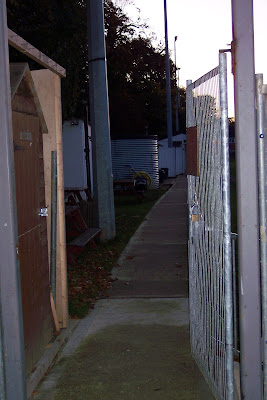 Behind the goal, just outside, by the small car park, is the clubhouse building. 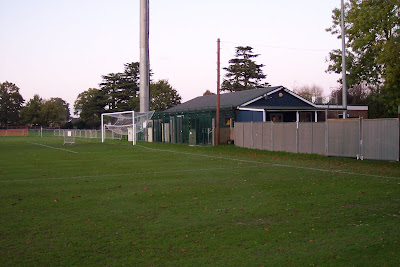 Everything is down one side here. The toilets, with some sort of water tank behind. Hope it's not recycled! ;-) 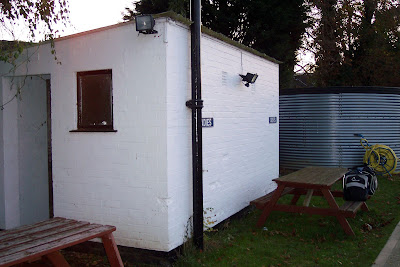 No terracing, just hard standing up to the seats. 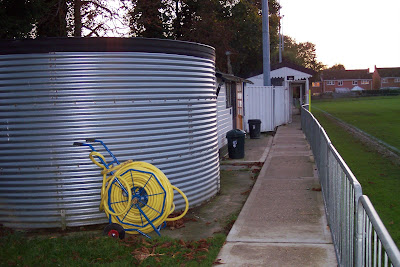 This is the boardroom. 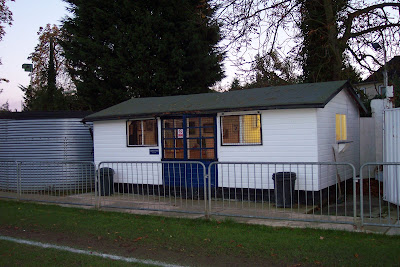 And a nice old stand, though if you look carelfully there are actually very few seats in it! 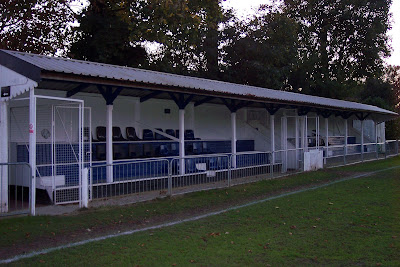 Just before the stand, set slightly behind it, is a seperate small block for the referees' room. This was the largest set of seats, I think there were around thrity or so in all, throughout the whole stand! 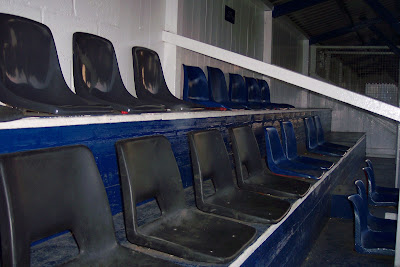 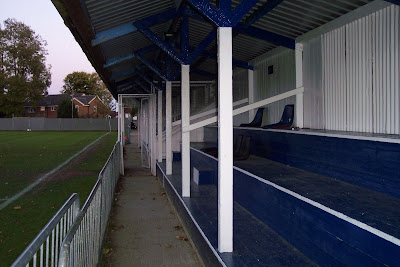 Past the stand is more of the concrete path. 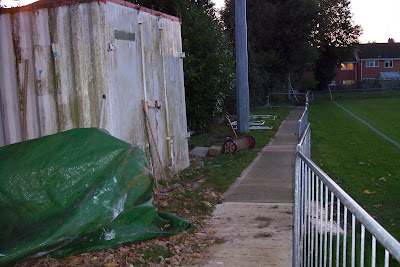 Which doesn't quite reach to the end. Whether this is 'work in progress' or 'project abandoned' I have no idea. 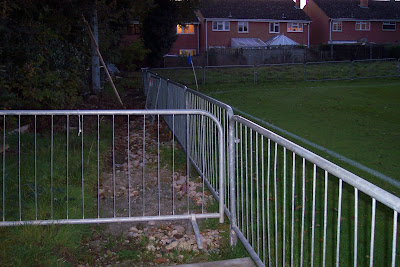 Nothing behind the goal, though you can walk round and stand here, as five Barking fans did in the second half. 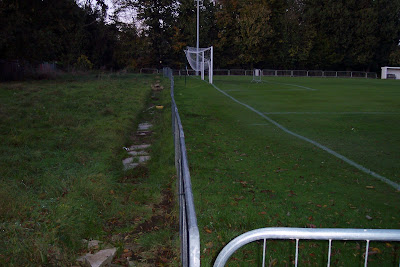 From behind this goal we look back to the stand. 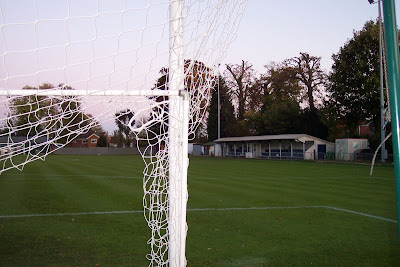 Now the bar was up the other end, and very few spectators venture behind here. I could not work out why this sign was here. Near the entrance up the other end maybe, but here? 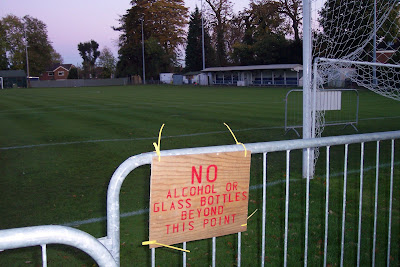 Not even hard standing on the far side, but it would be fine to watch the match from here on a fine day, rather than a cold evening like tonight. At least it wasn't raining! 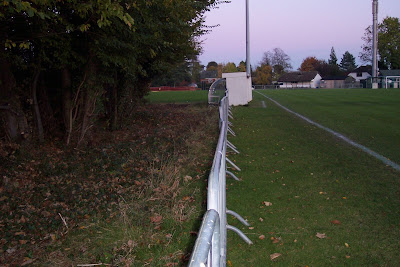 What is it with dugouts at lower levels and park benches? 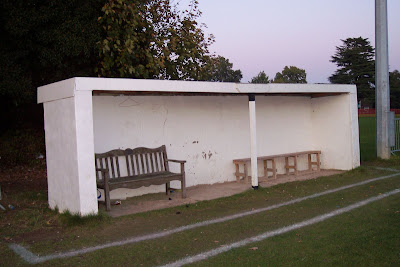 Here is a shot of the open touchline, clubhouse in the distance again. 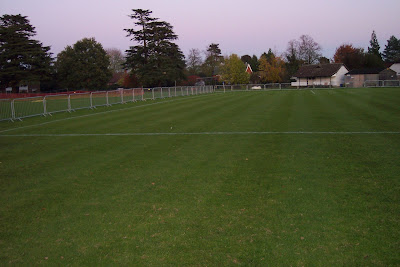 From here I cut across the pitch to take another photo of the stand. 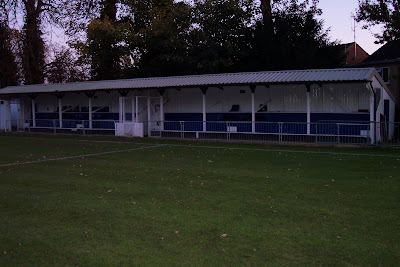 Here is the players' tunnel. 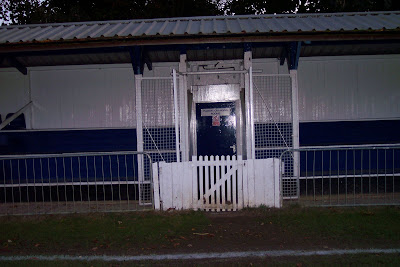 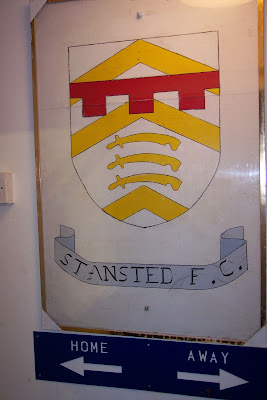 After that I was off to doss down on the airport concourse for a few hours before my flight.
There were a few of these posters dotted about on my walk back to the station.
Well long live plentiful, cheap budget flights! The more expansion the better! It's all well and good opposing airports, but how else can people travel? Now if you were campaigning for train travel abroad to be as cheap as Easyjet & co, then I would be waving placards alongside you. But until then I'll keep on flying while I can afford to... 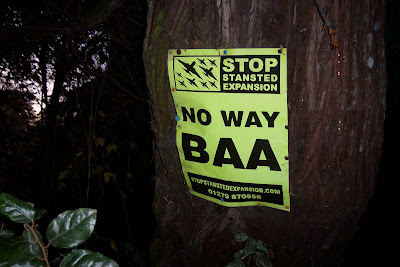 Hi- love the photos and the descriptions.

I have been to many of the grounds you have bloged about as i follow teams in the Essex Senior League.

It was nice to read your comments and see your photos of the places i am also familier with.

Any plans to come down to the Old Spotted Dog Ground or the Terrance McMillan Ground?