Falkirk has a modern stadium, opened as recently as 2004, and are a 'big' small club in the Scottish Premier League. The stadium is on the edge of town, about half an hour walk from the town centre. I visited it in mid June 2009. fortunately one of the main access gates was open ,as there was large scale building going on, with a brand new stand in the middle of being erected behind the far goal. I wasn't sure if I would actually get permission to take photos, if I asked someone, as-technically-I was on a building site. So I didn't walk round the whole ground, but got in and out as sharpish as I could! Luckily nobody pulled me up, and here are the results for you! 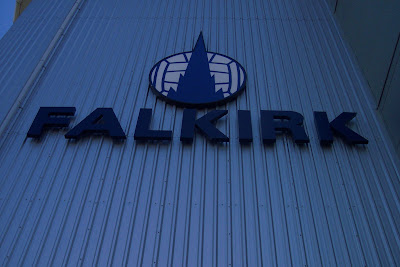 The signage like this emphasises how new the ground is, still being developed, as you will see. 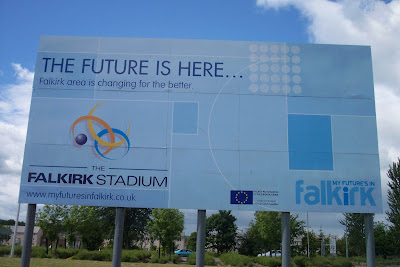 This is the approach to the main stand. 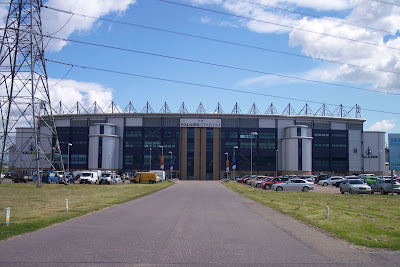 It looks very imposing and smart. 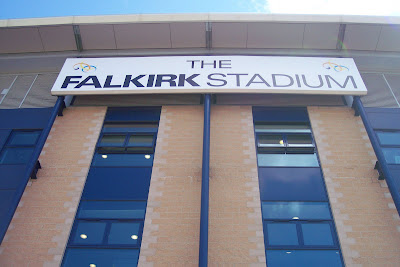 This is the first sight you get, as you arrive from the town centre. I entered the ground through the open gates between the two stands, in the near corner on the left of this picture. 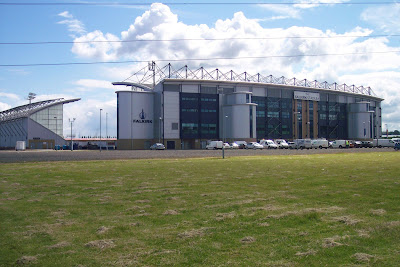 As we enter, at the corner, this is the main stand, along the side, to our right. 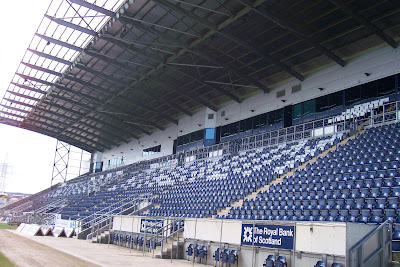 Looking towards the far end we see the new stand, under construction. 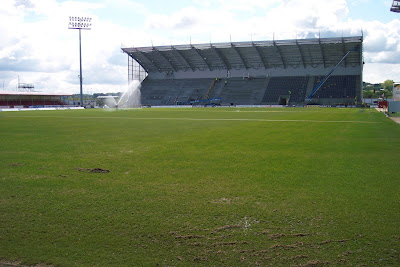 It looks exactly the same size & design as this one, up the near end. 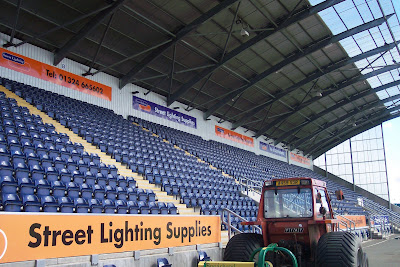 Along the far side is a low, narrow 'temporary' stand. I would guess that there are eventually plans to build this up like the other three sides one day. 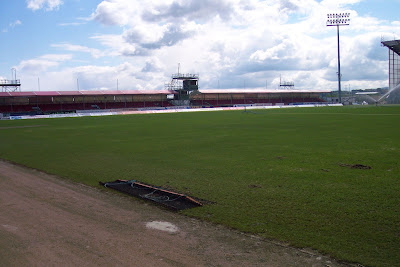 From behind the goal we get a better look at the main stand. 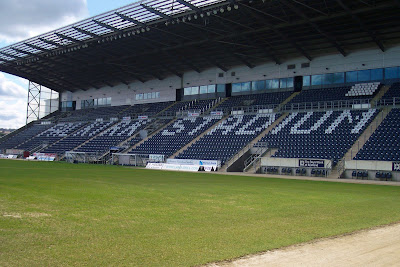 I walked to the far corner & took this shot of the temporary stand, down the far side, but didn't chance my luck by going further. 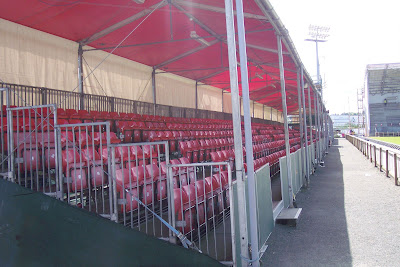 From this same corner we can see the new stand, the shell in place, but no seats yet. 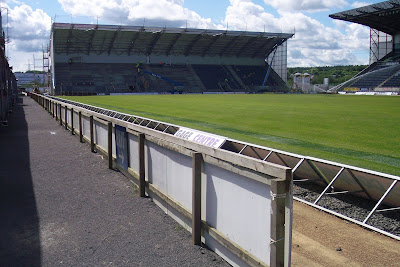 And another angle of the main stand. 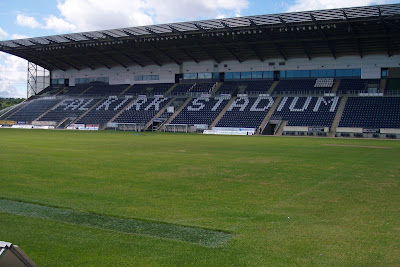 Now we turn back to the stand behind the goal, showing the seats for disabled fans at the front. 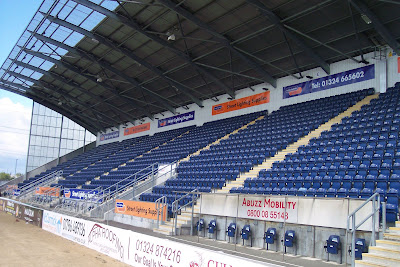 Looking upwards we see a banner, advertising the Bairns Trust. 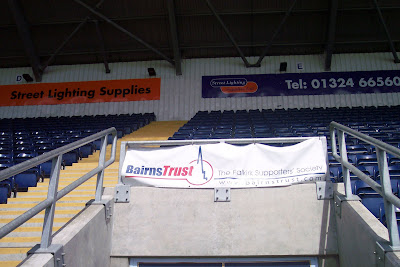 Climbing up into this stand, I didn't mind getting spotted now, as I had snaps of all four sides, we look across the pitch. 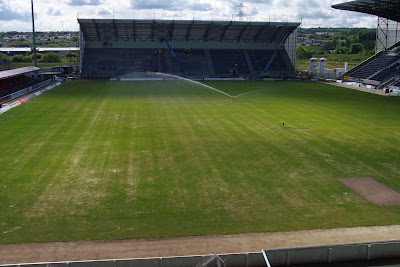 And over to the the temporary structure. 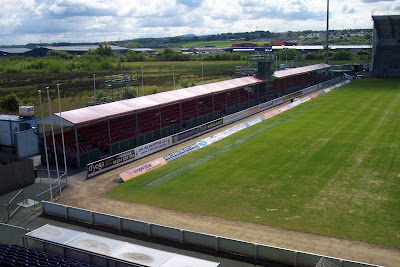 With yet another shot, to our right, of the main stand. 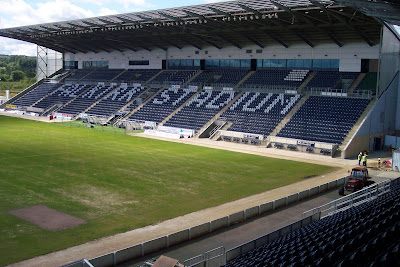 Here we look across the stand, still behind the goal, from the back row. 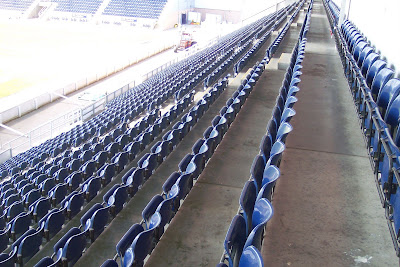 And upwards, from the front. 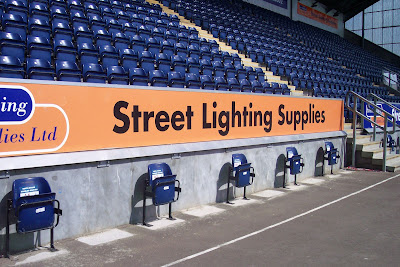 We're now along the side, in front of the main stand. 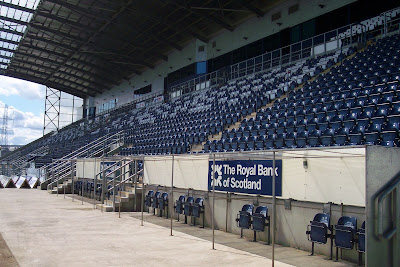 And walk further along, towards the dugouts, and tunnel. 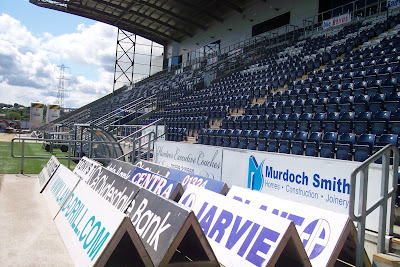 Here is one of the dugouts. 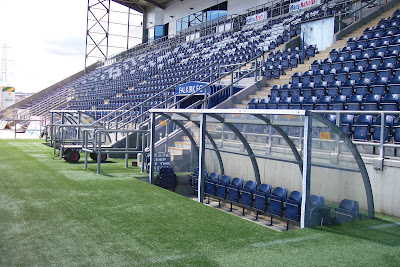 And the tunnel itself. I wanted to venture down it, but by now I was getting a few funny looks from builders & men in suits, so I didn't risk it! ;-) 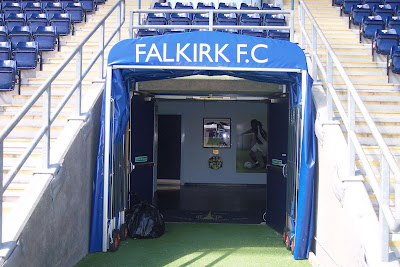 This gate was in front of the tunnel, as you come onto the pich, I wondered if it was keepsake from their old ground? 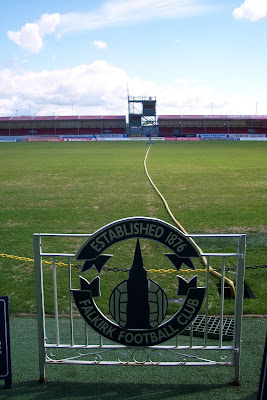 One last look at the already completed stand behind the goal, before we leave. 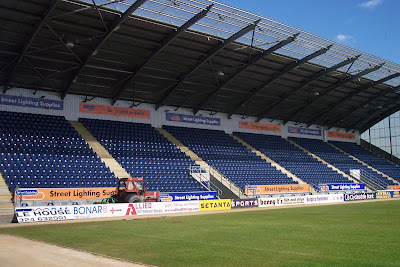 One final shot. the new stand, being constructed, from outside the stadium. 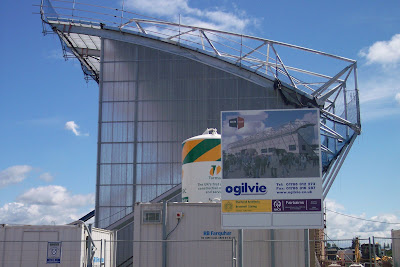 You picked a nice day to take these photographs. An impressive ground for a club of Falkirk's size although I feel the ground is probably to big. I will visit Falkirk again this to see the new South Stand and take a few pics at Firs Park as well.

Nice day? It was sun & showers! ;-)
I've also got Stenhousemuir to come,which is on the edge of Falkirk, thanks for looking in and commenting.

The plans are in place to take capacity to 15,000 with another stand opposite the main stand. Current capacity is circa 10,000 and the first game of the season ahead in the First Division (Second tier in Scotland) is an all-ticket clash versus Dunfermline Athletic so the ground might be an appropriate size.