At first glance the home of Olimps/RFS is a bit of a run down place, but hey, that's no reason to think any less of the place! I walked through the open gate on a Monday afternoon in July, & although one man asked what I was doing, he seemed ok with me taking photos. Perhaps he is used to 'football ground tourists'! 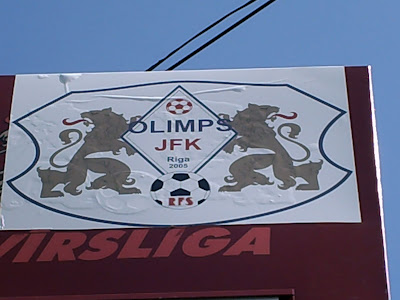 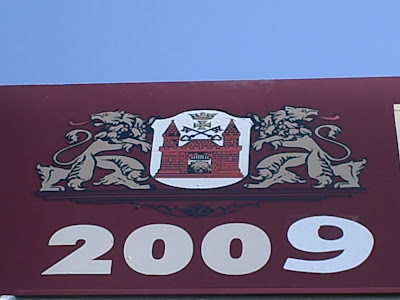 This is the back of the main stand, from the road. 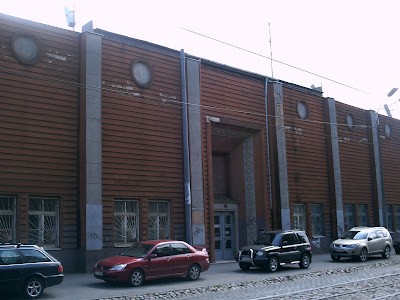 Which appears to be the main entrance. 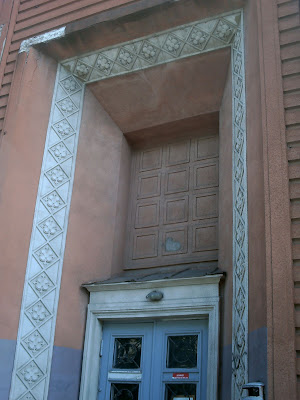 Further along, to the right of this building, as we look at it from the road, there is an ordinary entrance, with this large fixture board. 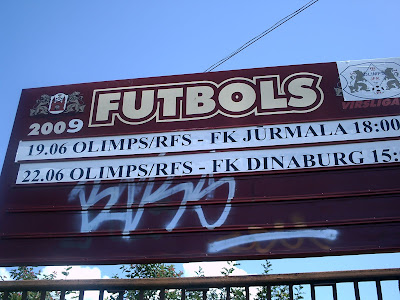 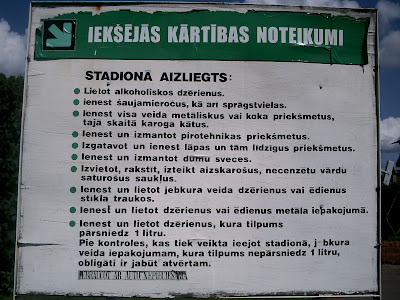 As we enter, and walk straight ahead, we're directly behind the goal, where this scoreboard is. 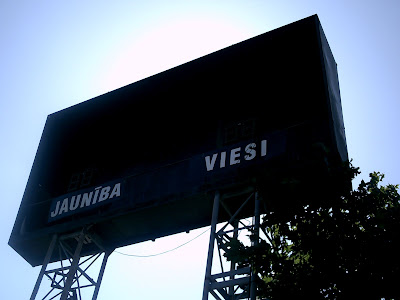 There's no spectator area behind this goal, here we look directly across the pitch, goal to goal. 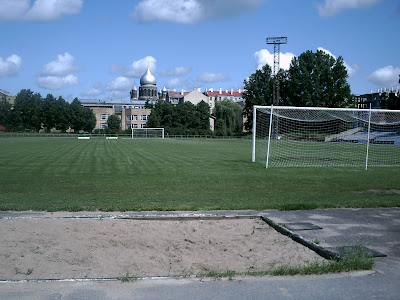 To our right is an open stand, where some sort of filming is going on. For what I have no idea, but I didn't really venture round that part of the stand, as the last thing I wanted to do was get in the way. 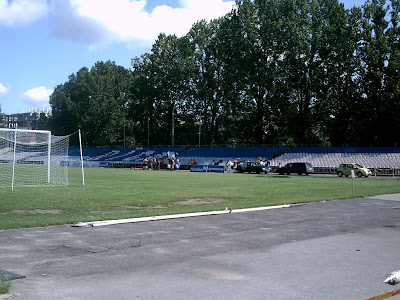 To the left is the main stand. The seats are covered by some old advertisinf tarpaulin, from the look of it I am nor sure if this is even used on regular matchdays. If anyone has been here to see a match in the past I'd be interested to know. 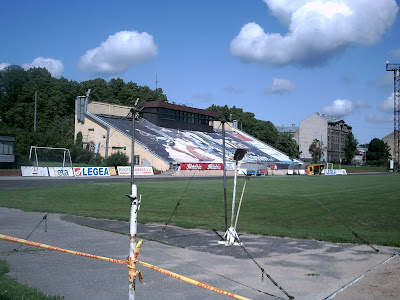 Here we get a little closer to it. That chap was the one who was enquiring what I was doing. 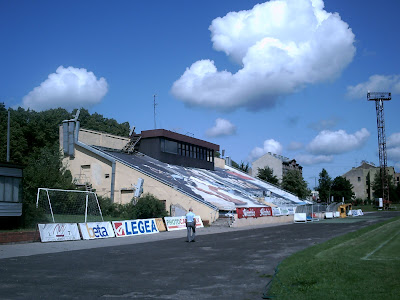 Here we are right by the stand. 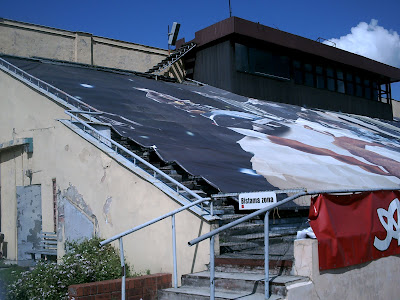 In front of it are the dugouts. 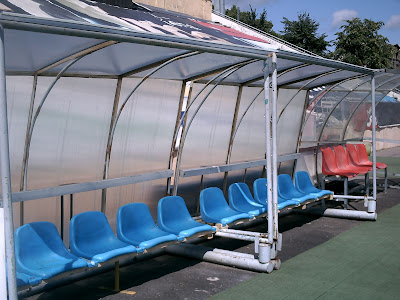 This is the players' tunnel. 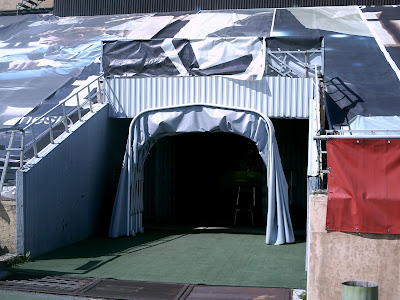 And, further along, the rest of the dugouts. 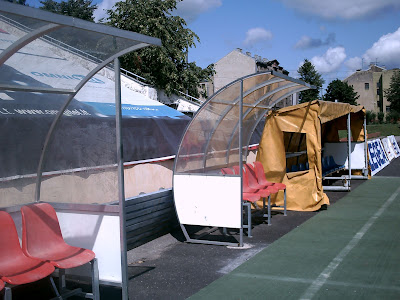 Behind the far goal is open grass banking. 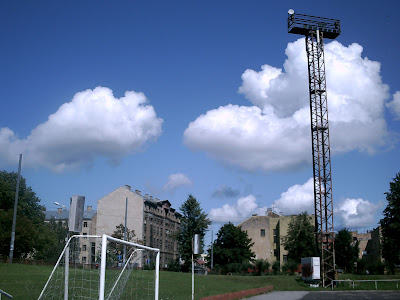 And from this corner we look over to the open seats again. 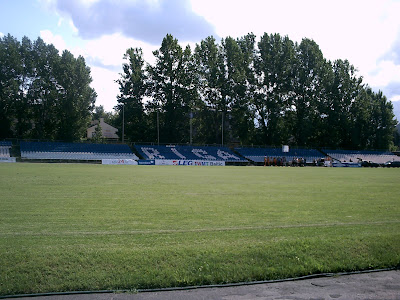 Here we have a good shot of the strange shaped (as in very non-English type) pylons. 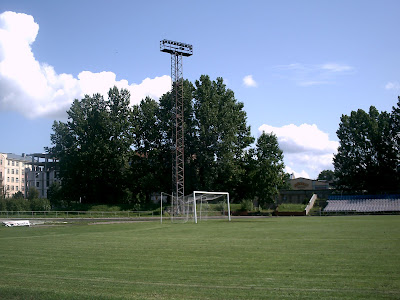 This is the banking behind the goal. the old track area looks as though it hasn't been used for a long time. 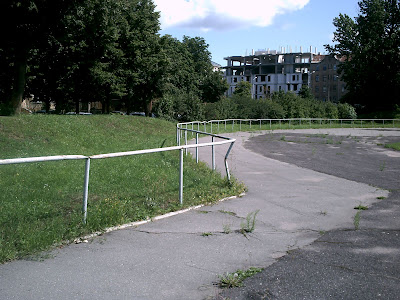 From behind this goal we look back at the main stand. 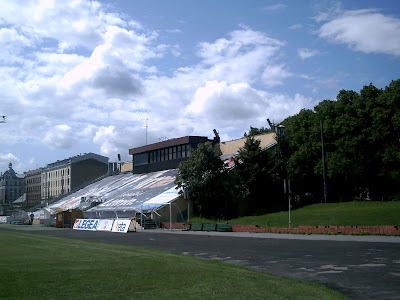 Now directly behind the goal we look down the open seats, on the far side. 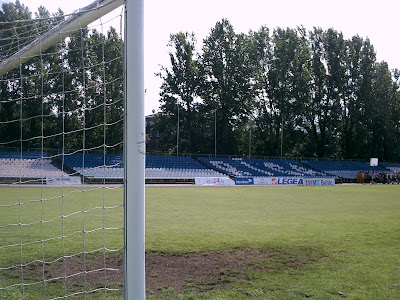 When we get close up to them they appear to be bolted onto old terracing. 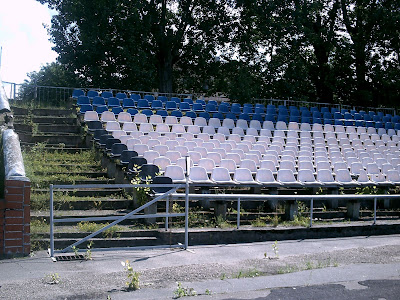 A snap of a LMT Virsliga hoarding, which is the Latvian top flight division. 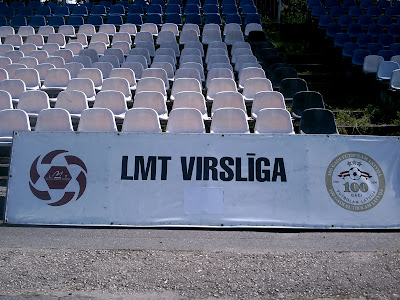 Here you can see what I mean about 'bolted on'. A shot down the length of this side, which is as far as I went because of the filming down the other end of it. 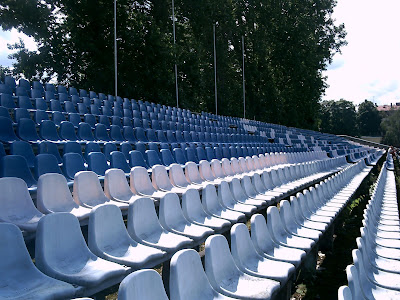 From this side we look back over to the changing rooms stand. 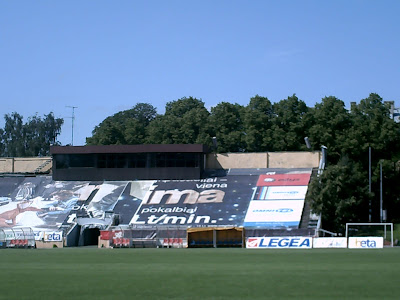 A pylon shot, for those who like some of these unusual foreign constructions. 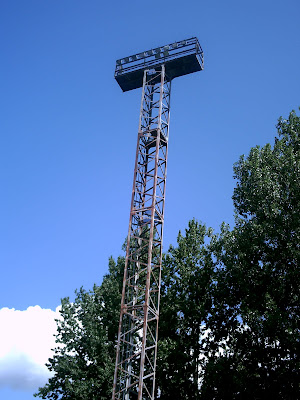 On the way back round I took a close up of the slightly crumbling steps, in the 'covered' open side. 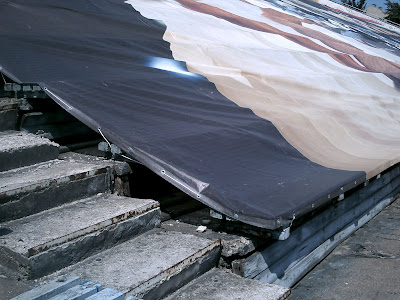 One last look over to the modern seating, before it was time to leave. 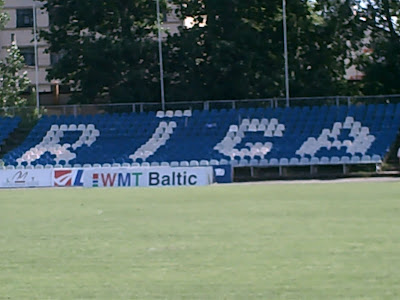 The stadium's real name is University of Latvia stadium. :) The plate is removed from the front door, because the main stand is in critical condition and hasn't been repaired for years. Usually instead of the advertising covering it there were just steps, that were removed of chairs. And the advert is Lithuanian, don't know why :D
From 1999-2008 this was the now defunct FK Riga's home stadium.
Now it's used by Olimps and 2 tier (1. līga) side FK Jaunība :)

Wow! Thank you! I think it's amazing that someone with local knowledge has found my postings!

We saw a 2nd division Jauniba Parex game there 2 years ago. The crowd numbered about 30 and was scattered around the new seated area. We entered from the main entrance and ended up coming out through the players tunnel!
The Russian Orthodox church in the background gives an interesting touch.

I agree about the Russian church, unusal backdrop for a Londoner to see!
Did they do any sort of programme at that level?I only ask because in Estonia they can do a basic four pager.