SK Dynamo Ceske Budejovice was my Czech choice for Sunday 25th October. I was actually there an hour earlier than expected as I forgot the clocks went back an hour, and did a double take at the main Prague train station, and realised it wasn't even seven o'clock!

This photo set isn't the fullest, as I went to the ground to buy my ticket early on, so I knew where the ground was, but didn't take any exterior snaps. I planned to take them before the match, but ended up pushed for time, having done the tourist thing and strolled around a quite pleasant town.

All the photos were taken from the one side, as I was unable to walk round the ground.

The less said about the game the better! It was an awful nil nil against Viktoria Plzen. Luck of the draw, I suppose. The crowd was 3,128; substantially less than I the attendance at the ice hockey I was to attend immediately afterwards. 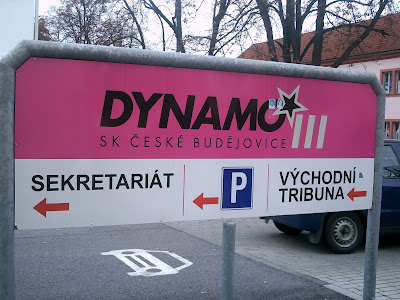 The hockey & football stadiums were only a few hundred yards apart. 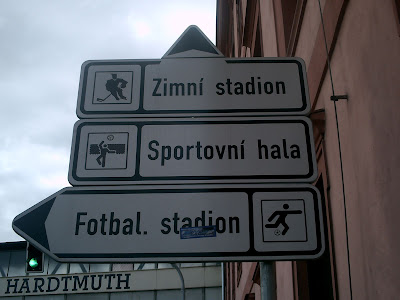 This was the view of the ground from the car park I approached it from just before kick off. 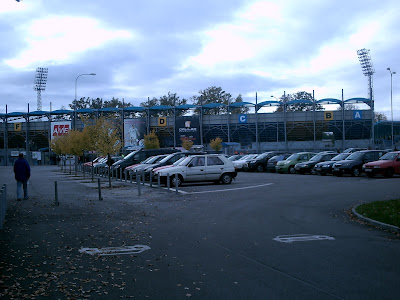 One of the ticket booths, though i'd bought mine earlier. Not the queues I was expecting! ;-) 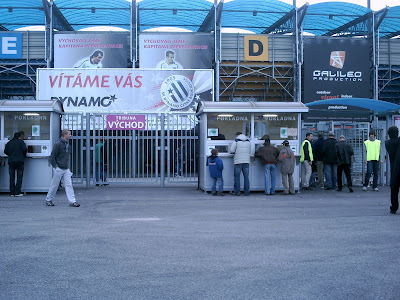 A plan of the ground. I was sat in the stand on the right of it. 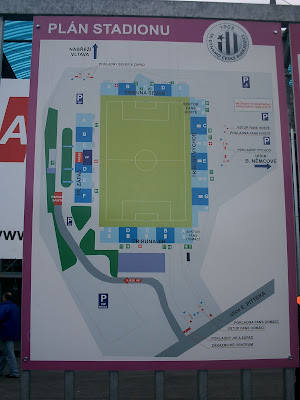 This is the back of my stand, inside the perimeter fencing past the turnstiles. I'm not sure what the building is beyond it. It looks like some sort of old water tower. 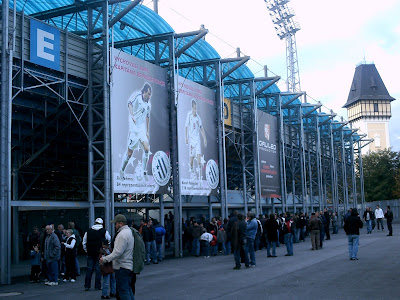 Club legends Jiri Nemek & Karel Poborsky included on the huge banners on the side. 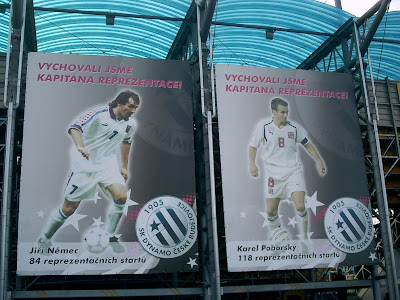 Under the stand is the staple Czech 'hot dog' called a klobasa. 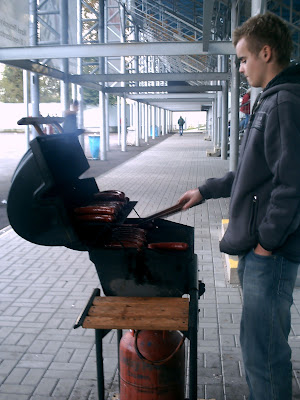 Now in the ground itself, it looks quite modern, with this blue roof. This raised stand was behind the goal to my right. 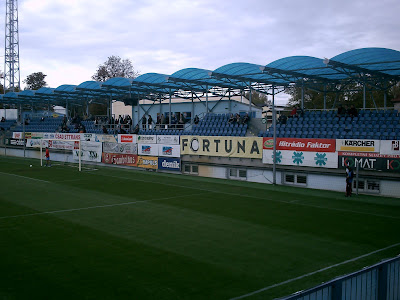 The same design is on my side, and down the far end. This is the corner of my stand, which is the fenced in away section. 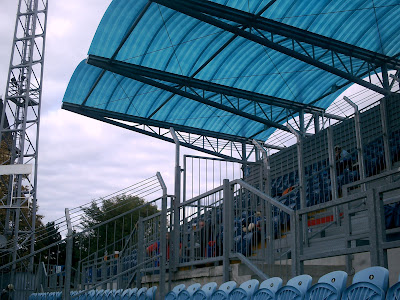 Here we look over to the main stand. 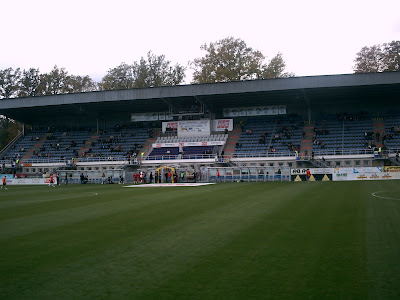 This is a full view of my stand down the side, from the front, where you can see the seating it 'two tiered'. 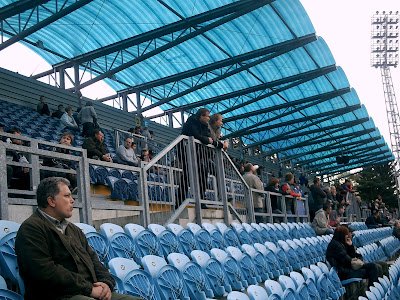 Moving along we look toward the stand behind the far goal. 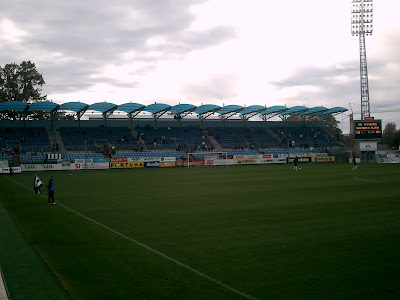 This is up in my stand, looking down to the far end, from where my seat was. 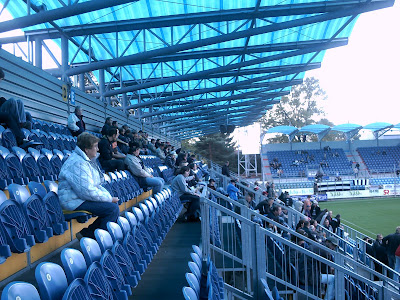 And to my right, the rest of it. 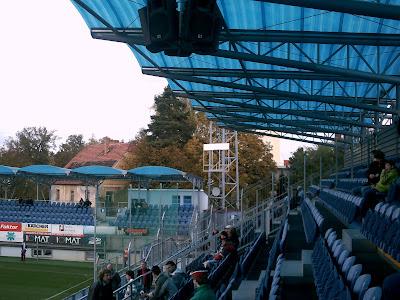 At half time I wander along the length of the stand again, heading toward the main home end. 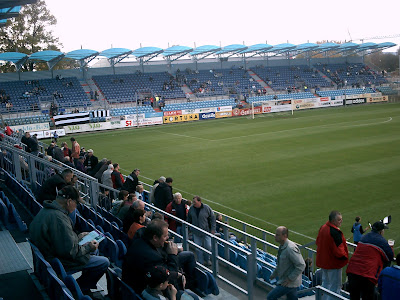 This is the teams coming onto the pitch before the match. Well I never said anything about the pictures being in any sort of chronological order! 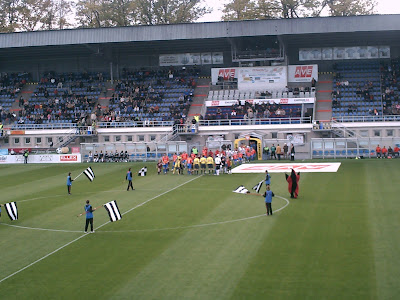 Back at the away corner, I would guess they brought about fifty or so. 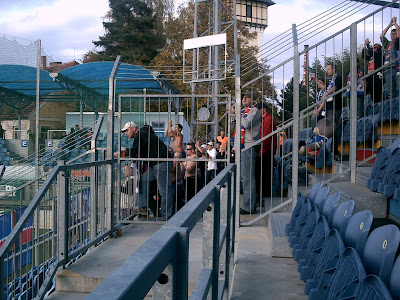 My stand along the side, once more, during the game, with many seats occupied. 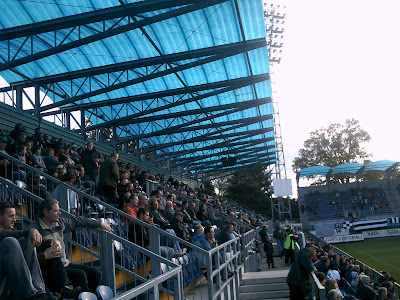 Down at the other end, this one from the interval. This corner of the end is their hard core support. 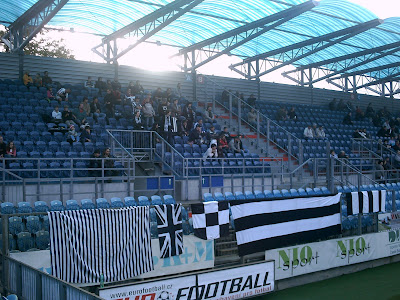 This is the best shot I could get of this end, from the corner of my stand. 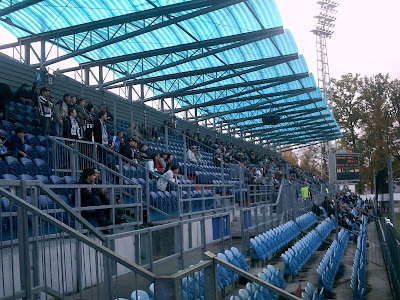 And from this corner we look back down our side. 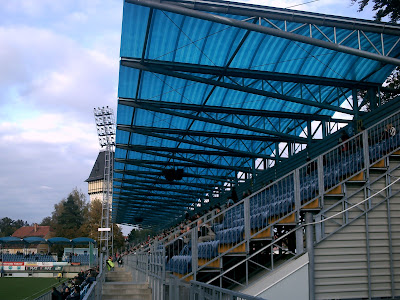 Similar shot, but along the lower seats. 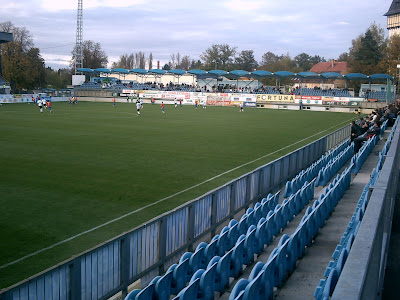 Despite being restricted to one side I still manage a corner flag shot! 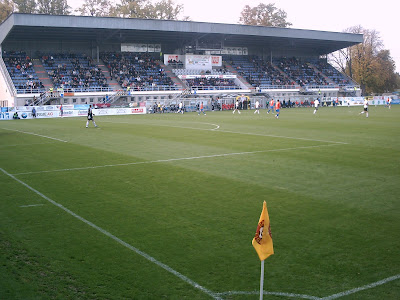 The hard core home fans' flags at the front, behind the goal. 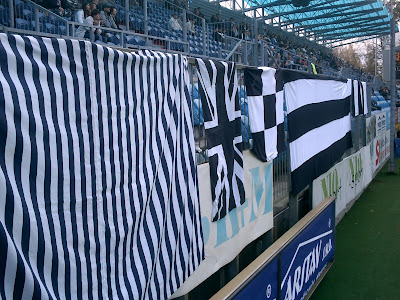 Back at the other end now, settling down to watch the second half. Glutton for punishment, it wasn't much better than the first period, but it couldn't have got much worse! 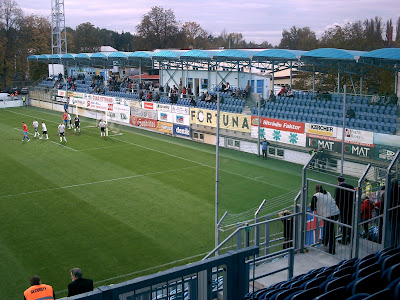 One final shot, across the pitch, it's starting to get dark, and the lights come on. 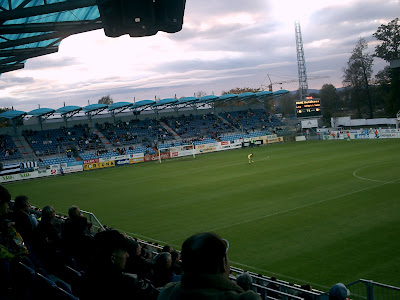