I found this old ground of AFK Zabehlice, having been taking photos of CAFC Praha, which is adjacent.

The ground was derelict, & not in use. Building work was going on next door, and the ground appeared to be the access for the comstruction workers. I don't know where AFK Zabehlice currently play, nor if they plan to return here. They currently play in the fifth, bottom level, of the local Prague leagues, which is the nineth level of the Czech football pyramid.

This old sign was along the side of the pitch. 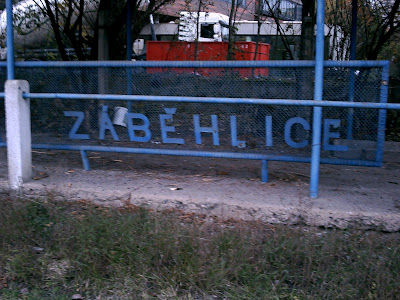 I am guessing it once stood above the main entrance here, but was taken down so as not to obstruct lorries getting through to the building site. 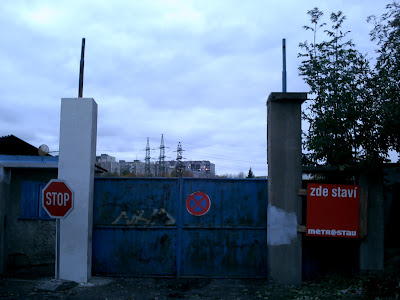 This was the entrance, a ticket booth, maybe? 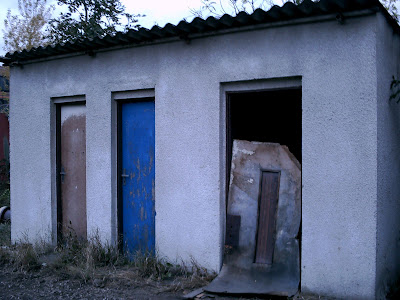 We are at a corner, behind the goal. you can see where the vehicles have gone over the pitch, to the new development, on the right. Note the small bit of cover on the right. 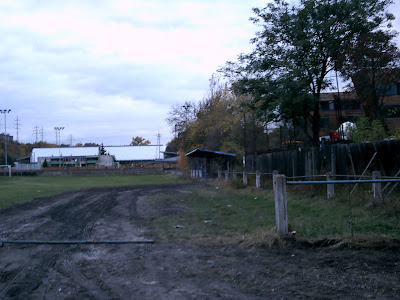 To our left, set back behind the goal, are these buildings. Old dressing rooms, and bar area. 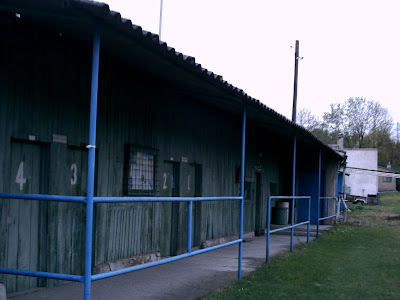 Pitch railed off, grass standing behind the goal. 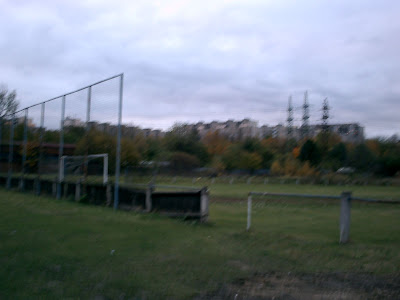 Here we look through the netting behind the goal, and the actual goal net as well. 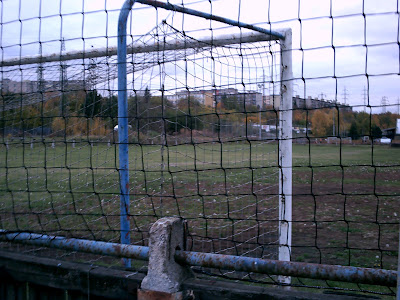 Low wooden fencing surrounds the pitch, to the corner. 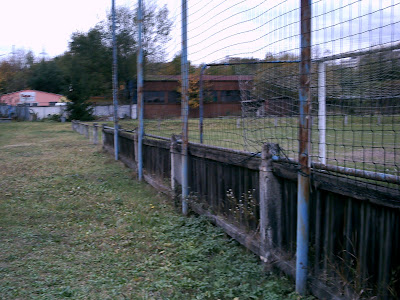 Beyond this corner is this building, I a not sure what it was, but it appeared (recently?) liced in. An old roller set back from the pitch it was once used on. 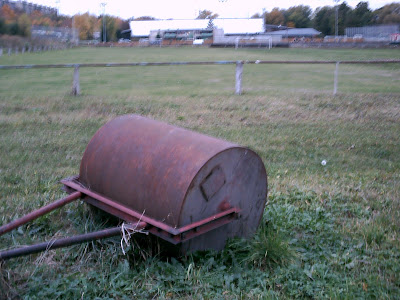 A 'corner flag' shot, where there are no longer corner flags, with the small stand on the far side in the background. 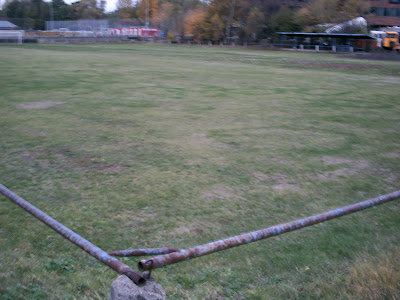 Grass banking down this side, with old benches along the top. 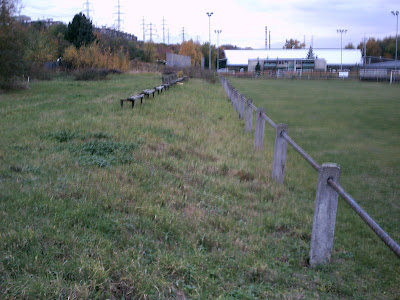 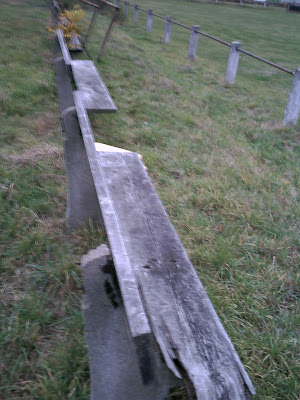 A view across the pitch, from behind one. 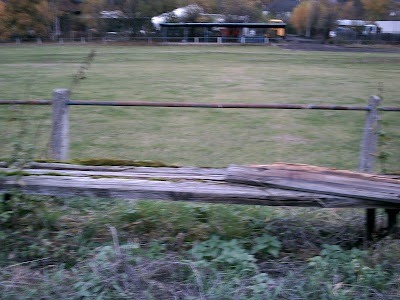 further laong you can hardly get to the touchline for the overgrowth. 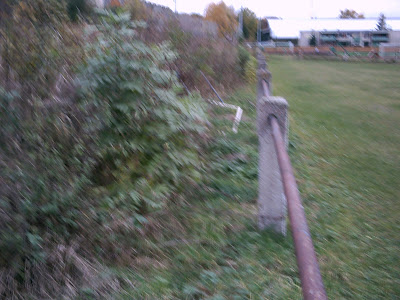 Now we see the open standing behind the other end, with the all-weather pitch of CAFC Praha through the fence beyond. 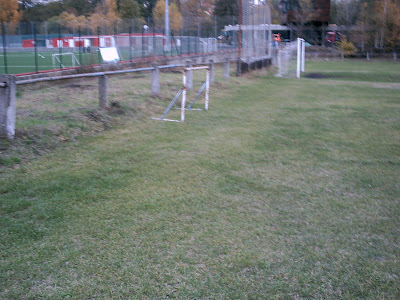 The net in a sad stand of disrepair. 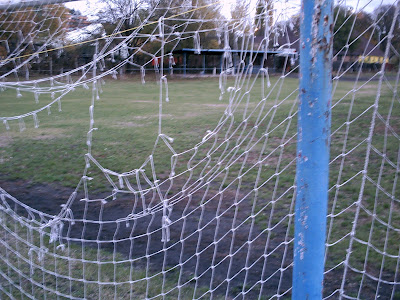 Heading down the last side now, toward the small bit of cover. 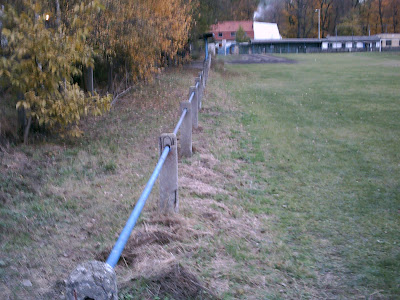 This is what is being built behind. 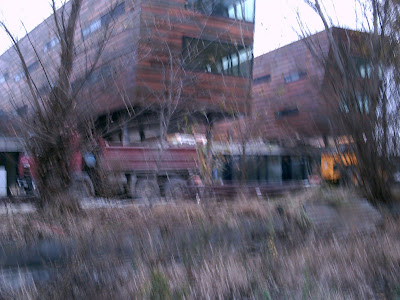 This is the covered bit of hard standing. 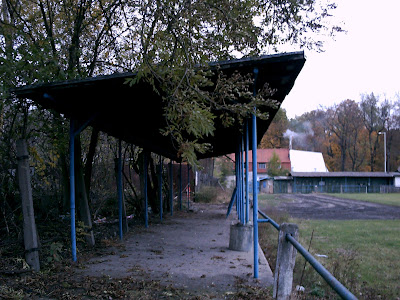 And from on the pitch, with the old club sign left in front of it. 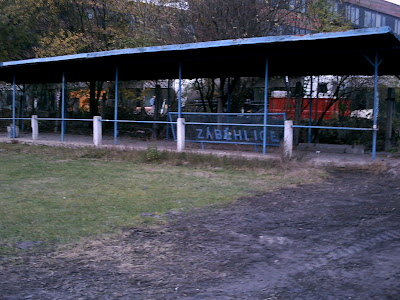 Past the cover it's overgrown behind the railing toward the corner where we came in. 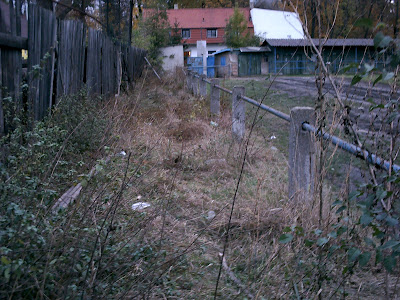 From the side we look back to the changing rooms & bar area. 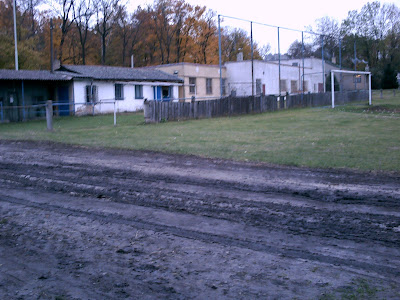 Pitchside we see the 'gap' where the players used to enter the field of play. How long ago that was I do not know, & if they ever will again at this venue I have no idea either. 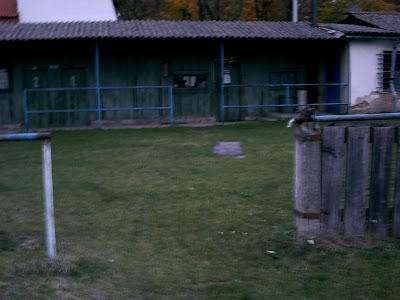