Benburb are a junior club, based in Glasgow, who play in the Stagecoach Central League Second Division. Despite doing a full circuit I couldn't gain entry through any gaps in fences, as the exterior is very secure. The teasing glimpses I got through some of it were amazing! It is a ramshackle old venue, very run down, that really sent shivers down my spine. For there is a large covered terrace here, that took me back to my childhood, so similar was it, albeit much smaller, to the covered terrace at the old Champion Hill Stadium (1931-1991) from my club Dulwich Hamlet.

It might not mean so much to others, but for me this really was a 'Wow!' moment, & this is a ground I will make it a priority to see a game at next season. 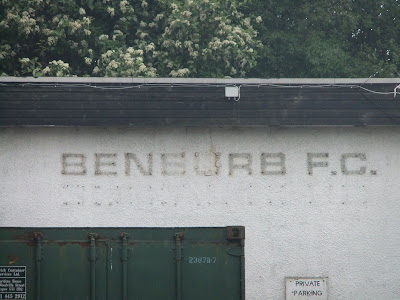 Approaching the ground it looks extremely down at heel, with a burnt out building adjacent. Maybe once part of club premises? 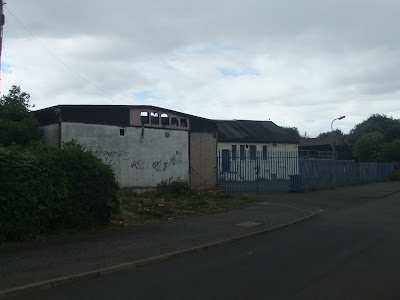 These buildings are seen through the gates. Bar the left ahead, with the sloping roofed structure the changing rooms? 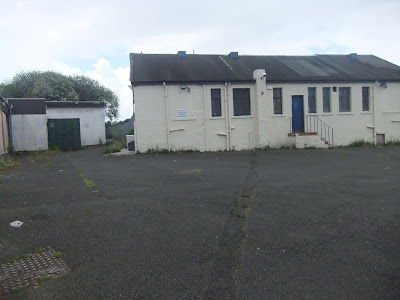 Looking across the car park we see a small booth through the next lot of fencing. I am guessing this is where they collect the gate from on matchdays. 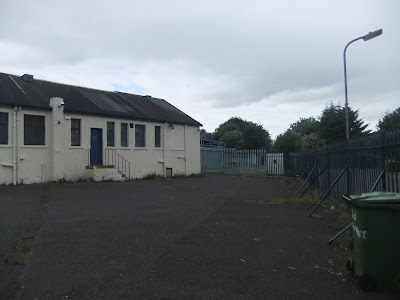 Moving along the pavement outside we can see a glimpse of the pitch, by the aforementioned ticket booth. 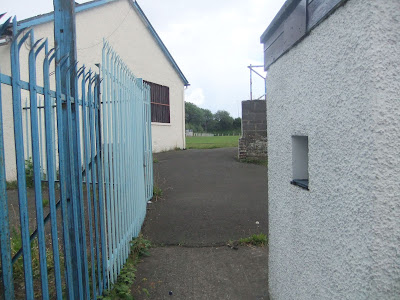 Past this we can see the rear of some banking behind this goal, with the roof of the terrace along the side in view. 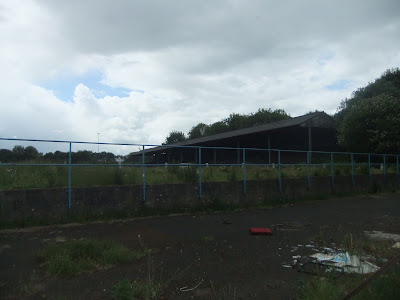 The fading club name is on the side. 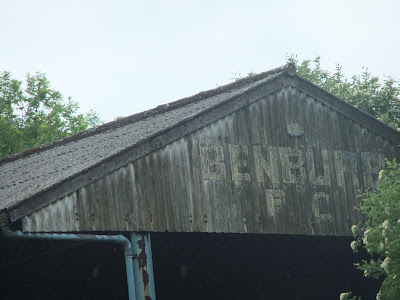 It appears to run the length of the ground, but we can't get a full shot from this end. 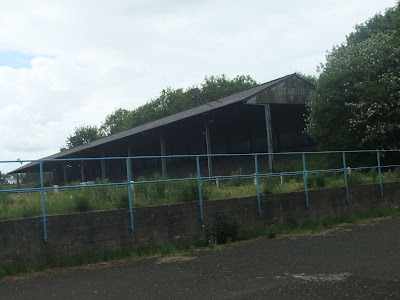 heading back out to the streets there is an open park at the other end. Thr ground is still fenced off, but you can see through it, and we are above the ground. Here we look down the pitch to the end we were outside of. 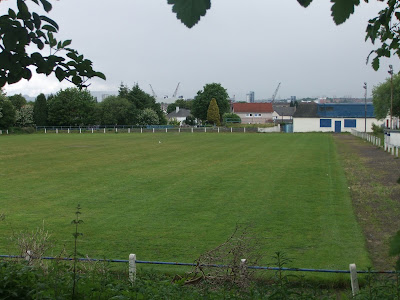 There is a nice stretch of old open terracing at the far end. 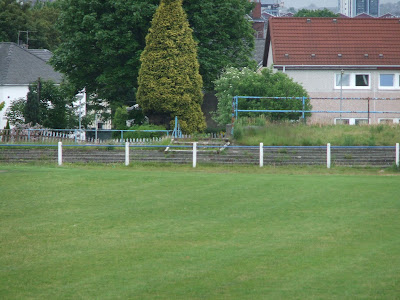 It goes as far as the club buildings. 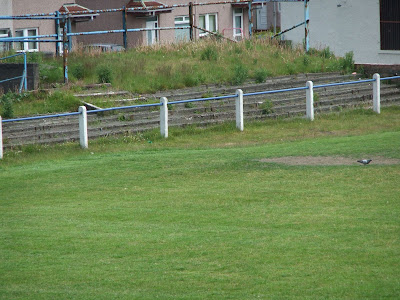 There is nothing down the side, just an overgorwn slope. Three days after taking these shots I was told by a fellow 'Kempsterite' 'prorege', that there is actually old terracing under all that foliage. 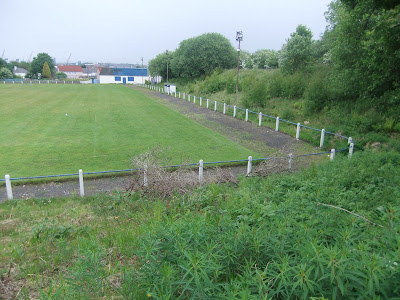 Here is another shot, this time directly down the touchline. 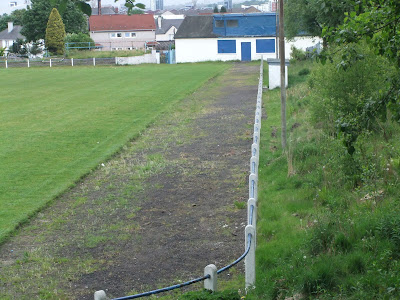 Moving along the outer fencing slightly we now look across the pitch, and see the magnificent old terrace along the other side. 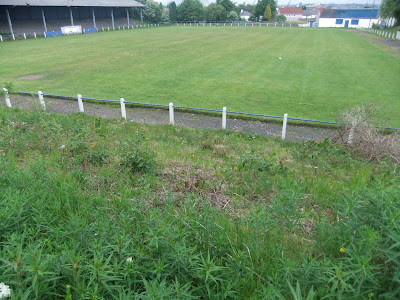 Now we're at the next corner, & look along behind the goal at this end. 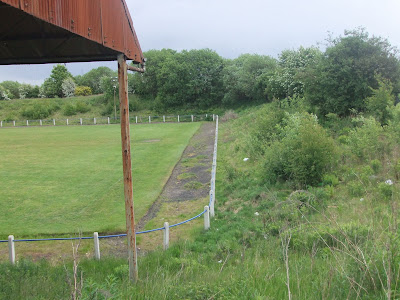 Going back a bit we see the terrace, through gaps in trees, & we can spot an old dugout at the front. 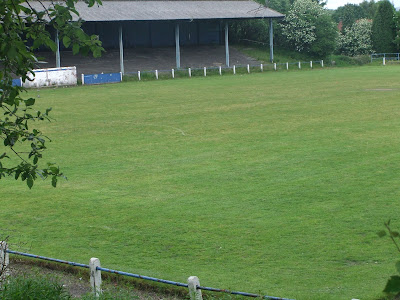 Here we see a great picture of the terrace, with the rail behind this end also in shot. 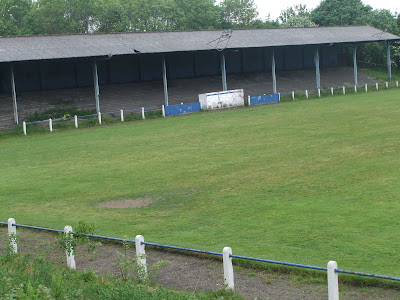 This is a close up of the roofless dugout. 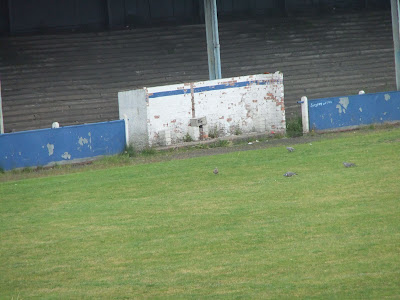 Here we have a full length picture of the terrace. 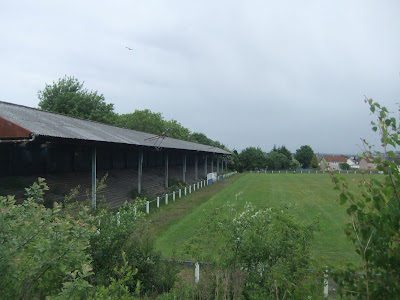 And from this angle I am almost transported in a 'time machine' back to our old ground in South-east London! I swear I'm getting a stirring in my pants I'm that excited! ;-) 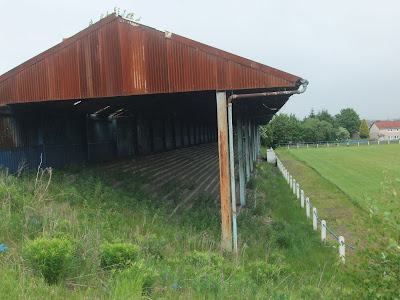 Here is a look at the terrace, by sticking the camera through the fence. 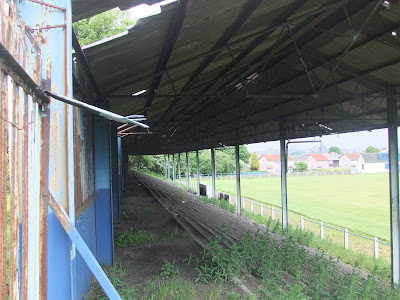 From roughly the same spot we glance down the terrace, & over the pitch, where we can see dugouts on the far side. 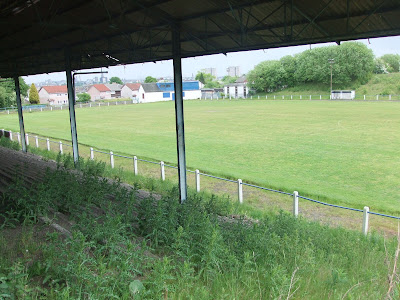 The remaining pictures are all taken from outside the ground! By carefully placing my camera through disintegrating rusty holes in the back of the terrace. Here we look down the terracing. 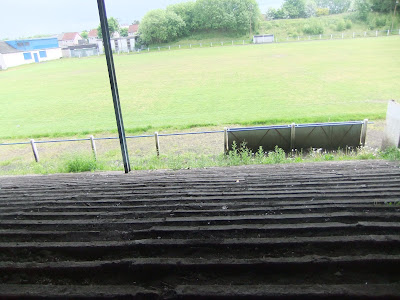 Pointing to our left... 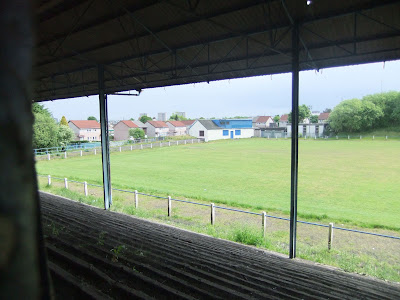 And to the right. 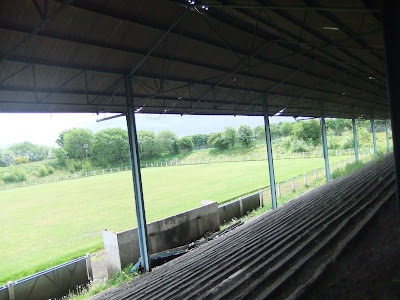 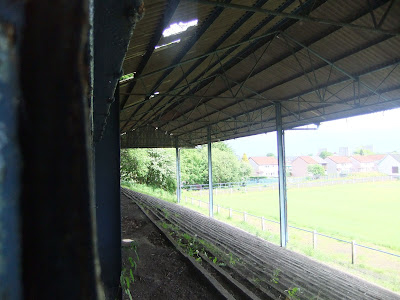 With a final picture, to the right, before it's time to move on. 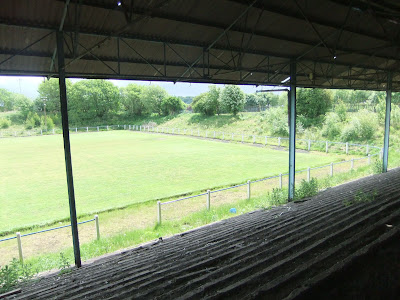 An amazing old ground, that certainly would be no more, if it was in London. Long may it continue to defy time & be a part of Glasgow's great sporting heritage.
Posted by Rabbler at 10:29

Love the photos of Benburb FC. Keep up the good work with your site.

Many thanks for you nice comments Mats.

It's a timely reminder for me to look in on your site once more, I must do so more regularly than I do!

I've popped into the old, derelict Wexham Park Stadium a few weeks ago. I will publish them soon. It's a very sad st of photos....

Great pics of Tinto, and yes there are banks of terracing under all the weeds and undergrowth on the two mainly open sides. What you refer to as 'old' terracing was actually fairly new -'70's I think, and yes the burnt out buildings were previously part of the set-up. In fact the burnt out buildings were the social club which was the clubs main source of income until being 'taken' over by local drug dealers (resulting in a shooting and murder in the clubhouse itself) ending with the club being shut and the club effectivly losing its only income stream. Since then a tireless effort by committee members has seen that part of the ground closed off and some attempts at keeping the usable parts useable added to making the team amateur has seen a bit of a resurgence. Taking your comments on how it stirred you to see the ground as it reminded you of Hamlets old ground I have to point out that every time I see Tinto - either in the flesh or otherwise it does the same to me as it was were I saw my first ever 'live' game of football.

Anonymous: I know where you're coming from! It might be 'progress' with modern samey bland grounds, but there really is something magical about rundown old stadiums!

I still miss the old Champion Hill, it's what I grew up with, but it's nearly twenty years since it was demolished. I'm getting old! ;-)

By co-incidence I have followed two of the teams mentioned and once visited the Old Champion Hill. I was born in Govan and followed the Bens until I was 15. I moved to Slough at 15 (1963) and got an apprenticeship. Followed the Rebels for a decade or more when they were good and seen them at Wembley in the Amateur Cup Final as well as their first match at Wexham Park.Still remember the infamous match at the Dolphin against Skelmersdale when Chrissy Mullen missed the penalty in a 2-2 draw. I visited Champion Hill once near the end when the terracing behind the goals was roped off. The similarities with Tinto Park brought back so many winderful memories. Now I have gone full circle and sponsor(produce) the website and programmes for the Bens as they struggle to survive against unbelievable odds.Sir Alex Ferguson is their biggest fan and he visited Tinto Park a few months back.The record crowd for Tinto Park is 20,000 and Sir Alex was at the match.

Drummie: samll world, you having been to the old Chsmpion Hill!Many thanks for the reminiscing & anecdotes. I love reading them!

Can the owner of this blog please contact me at: webmaster@mygovan.com
I was wondering if I can use your pictures of benburb fc on our new website at: benburbfc.co.uk
Kind regards,
James

Played at Tinto Park in 1971 for Neilston Juniors . Ended up being carried off with torn ligaments - great times!! Pitch was black ash then with a smattering of grass down the touchlines as were most Glasgow Junior Clubs. Different now it appears and never heard of synthetic surfaces then till I came to Canada where I still live.

As the 20,000 record attendance shows, this was once a fair sized ground. bigger than many in the league. I remember the now overgrown terrace on one side as huge, the sort of terracing only seen nowadays at GAA grounds in Ireland.