I'm not 100% certain, not being an expert on Belgian football, but Royal Ruisbroek FC appear to play in the eighth level of the Belgian pyramid. They are based just outside Brussels, & I stumbled across their ground by 'accident'. I was looking as grounds in nearby Uccle, when I saw one of the stops on a bus timetable said 'Ruisbroek Voetball', so I got on the next one, jumped off at the said stop, found a gap in the fence, & snapped away! I took these back in June 2009.

This sign has the 'F.C.' first, but in their club name it comes at the end. I have no idea why. 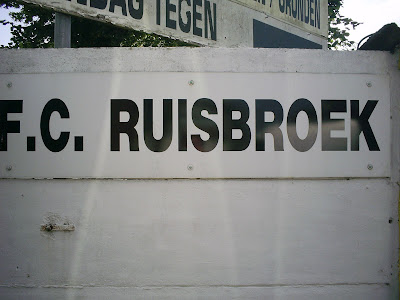 This is the bus stop directly outside the ground. Note the stone slab just behind it, to the right. 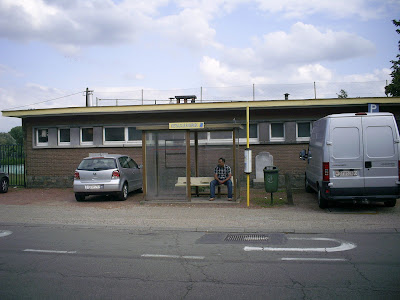 It is the Club war memorial. 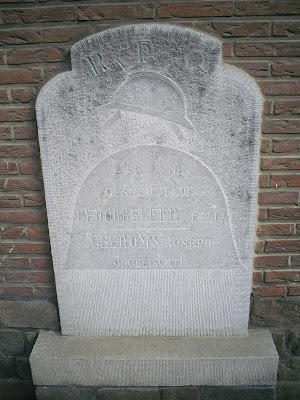 Here we are looking at the entrance to the ground. 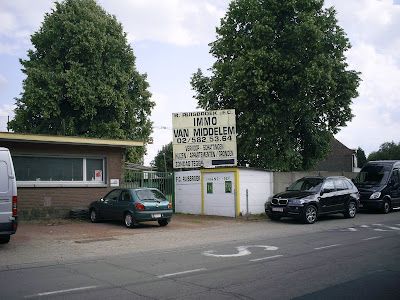 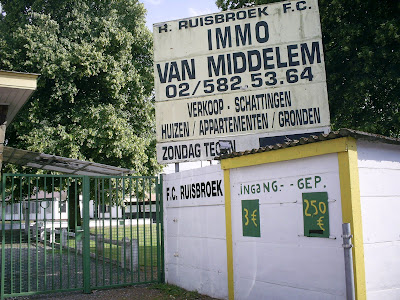 For the purpose of our 'tour' we are going to start our walk round the ground from the left of the chaging rooms behind the goal, which is the building we saw from the street. 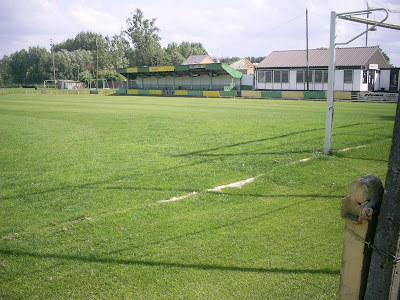 To the corner it is railed off, with grass standing behind the barrier. 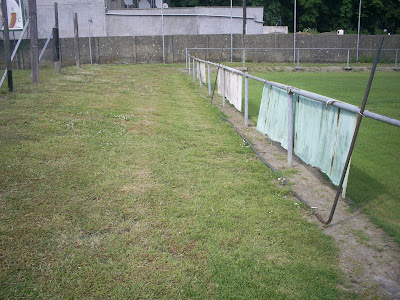 Still behind the goal, we see down the touchline on our left, open all the way, with the only structures being the dugouts. 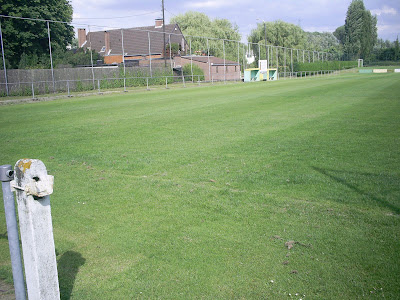 A mix of old hard standing & grass down this side. 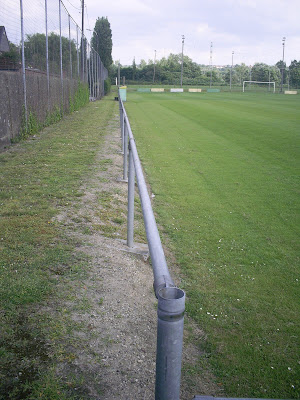 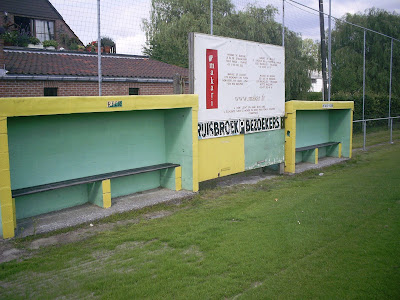 Beyond them it's more open standing. 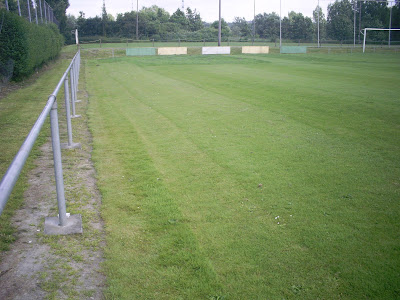 Looking across the pitch the local wildlife/vermin* (delete as applicable!) are making a total mess of the pitch! 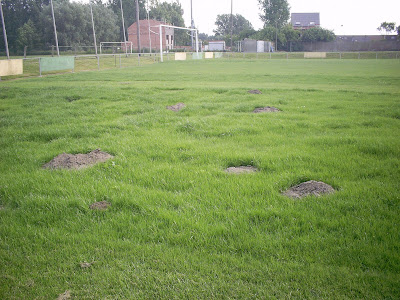 A slight grass bank behind the goal. Note the fencing to our left. 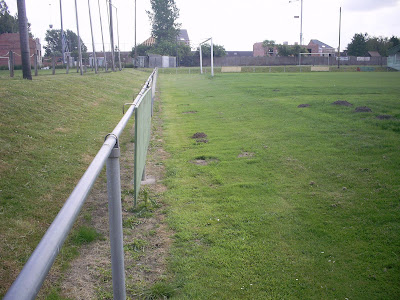 This is the second pitch, which is roped off, along old concrete bollards, along the side. 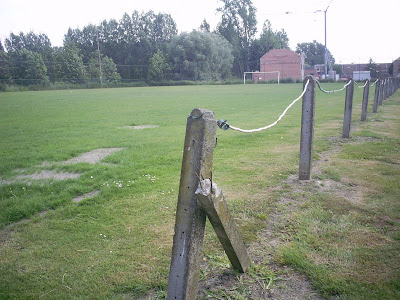 Behind the goal of the main pitch, we see the main stand, to our left, for the first time. With the club bar just past it, with the higher roof. 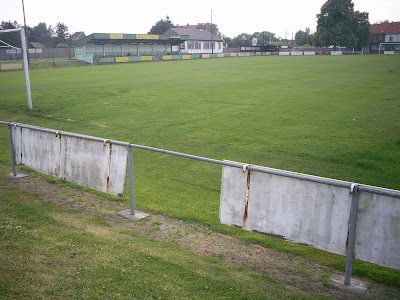 Moving toward the main side we see grass banking along it, leading up to the stand. 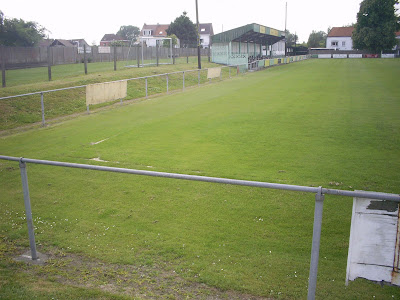 A path has been worn away at the front. 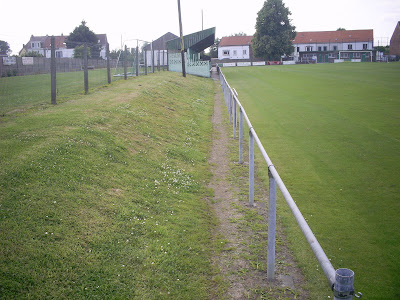 Now we've reached the stand, with some attractive old fahsioned brickwork on the side. 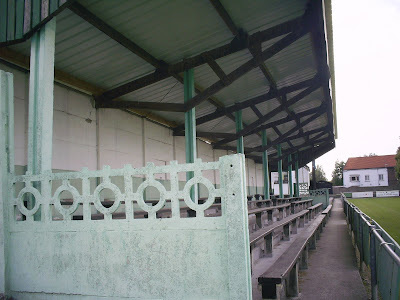 Rows of well maintained wooden benches along it. 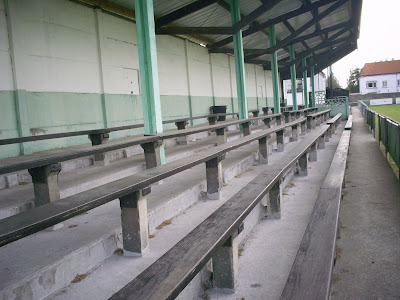 The club name is painted on the front of the roof, as we can see from on the pitch. 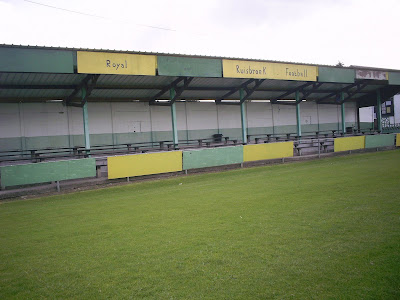 Just beyond it we see the clubhouse, with the only concrete terracing in the ground in front of it. 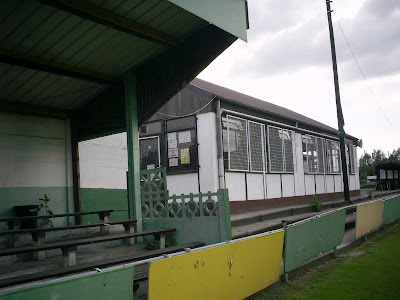 I would hazard a guess this is a popular vantage point when it's not raining, if they allow plastic glasses outside. 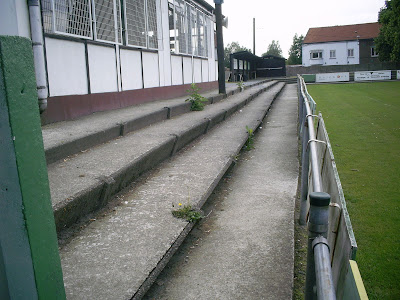 Back in the stand we look over to the dugouts. 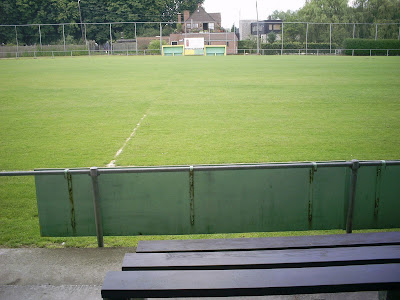 Before moving on, and looking at the side entrance to the bar. 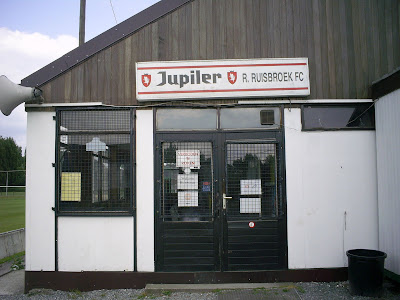 Further along, in the corner, is this small area of cover, with a hut in the corner. Not having been here for a game, I can't be certain, but this looks like a food area on matchdays. 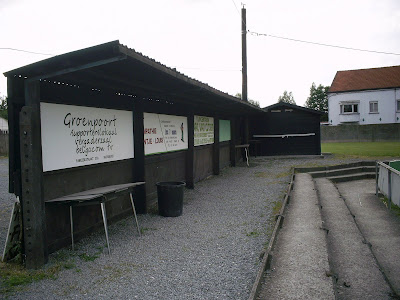 The terracing continues round, behind the goal, where we began. 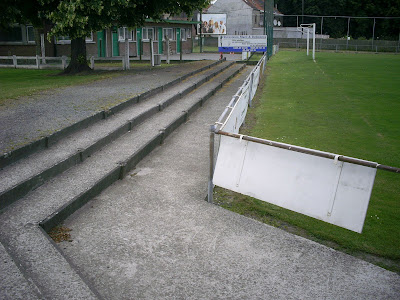 It reaches as far as the changing room area, which is where the turnstile booths are, to the left of this photo, by the building. 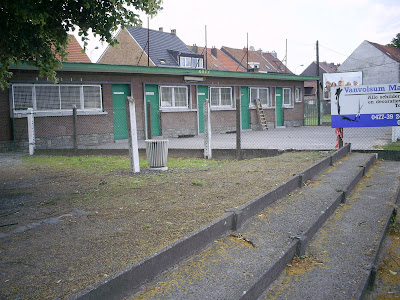 From behind the goal we look back along the main side. 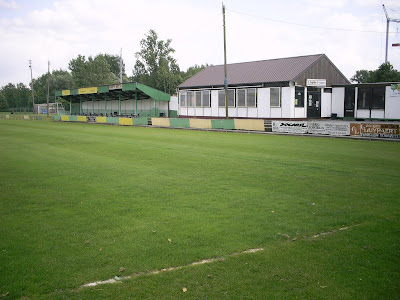 With our last snap being of the changing rooms directly behind the goal. So ends our visit. The club may be right on the bottom rungs of the Belgian football pyramid, but the ground is certainly worthy of more, & one I'd happily watch a game at, if ever the opportunity arises. 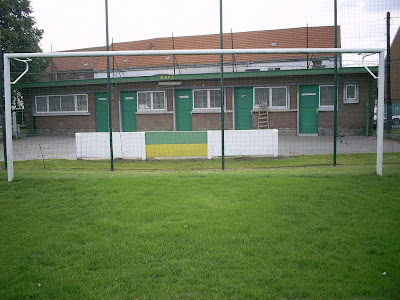