AFC Sheppey play in the Kent County League Division One East, and seem to have emerged from an attempt to re-form the old name of Sheppey United Football Club. Why thst failed/went wrong I have no idea.

I never saw a game here, when I took these photos towards the end of the 2006/07 season. Dulwich Hamlet Under Eighteens were drawn away to Sheppey United in the John Ullmann Cup, & as I'd seen the Hamlet play at their old Botany Road ground in a pre-season match in the very early eighties, I took the opportunity to watch the current side. Unfortunately the match was at the ground across the road from here, but I still took a few snaps.
Again, like almost all grounds at Step Seven and below, the grounds are basically fields. But at least a sign like this lets you know you are at a football club. 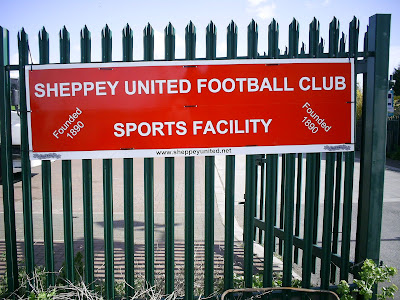 Though this board looks a bit battered. 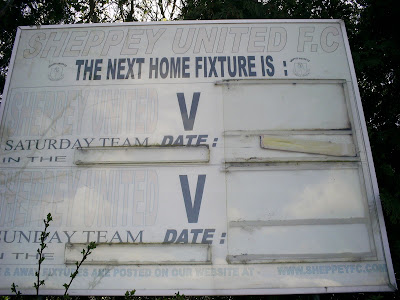 A look across the field, as we have gone through the gates. 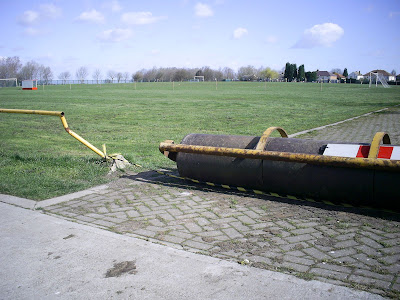 There are changing rooms, & a pavilion of some sort, down the side of the field, and there were two pitches here. 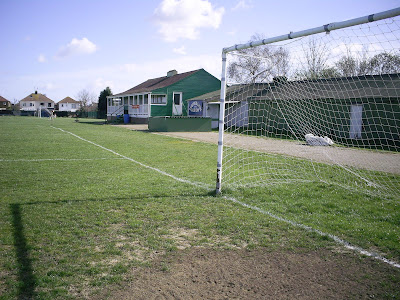 This is presumably the 'main pitch', as it was the one with the dugouts. 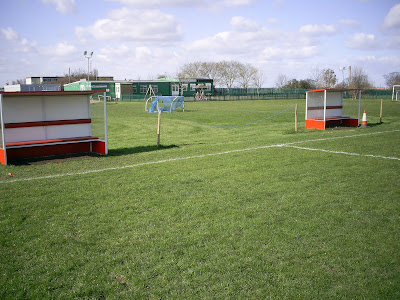 Would love to the town of Sheerness have a team at the level that Sheppey United were 20 years ago when i watched them on several occasions.

Their ground at Botany Road was a cracking little stadium and you could always get a decent pint with it being in the Shepherd Neame area!

I watched Dunstable play Sheppey at Botany Road around 1986 or '87 , and have some pictures somewhere . Really nice little ground as Steve says.

Sheppey United were successfully reformed three and a half seasons ago and are now playing at step 5 in the SCEFL and are averaging a gate 0f 320, about 115th highest in the non league attendances of the UK. There are plenty more facts if you google Sheppey United FC.

The AFC Sheppey experiment failed and the club were reformed (again) a few year back under the original name Sheppey United. We now play across the road from the ground you visited. It's a nice little ground that is being continually upgraded. The club are now 1 step below the Ryman league having gone up 5 levels since the original reformation in 2003.

We get pretty decent gates now. Anything from 290-718 and take on average 50-60 supporters to most away games.

And you can still get a decent pint, there's even a supporters bar as well as the main bar in the clubhouse.