I cannot recall my first visit to Three Bridges. But it would have been back in my early teens. I didn't go to every Dulwich Hamlet game back then, but I saw a lot. There were times though when I just went out & played with my mates from school/ One such Saturday we bunked on the train at East Dulwich, and jumped off, randomly at Three Bridges. I didn't even know they had a team! But we passed their ground, and bunked into that. My mates were soon bored, I would have been happy to stay. But I was 'outvoted' so we soon left, and walked into Crawley, not that we knew there was a place called Crawley in that direction, and just graffited the pace a bit, along with some random pilfering from shops, before heading back home!

My first proper visit here would have been for one of a number of Dulwich Hamlet pre-season games, we've had a few over the years. I don't think I've been here for a 'proper' neutral game.

I once got here for a Youth Team pre-season on a Sunday. As I approached the ground I thought the match had been cancelled. I saw the bar was open so went to confirm in there. I was told it was actually at a local sportsground about a mile away. A bloke drinking on his own by the bar overheard, and asked if I wanted to go to the game. He said he was just about to have another quick pint, and would then give me alift to it, as his son was playing. Two quick pints each & off we went! I think if I was sober like I am nowadays I might have been a bit concerned that he was just a tad over the drink-drive limit!

I took these photos at the start of this season, having stopped off here, returning by train from our pre-season game at Horsham YMCA. 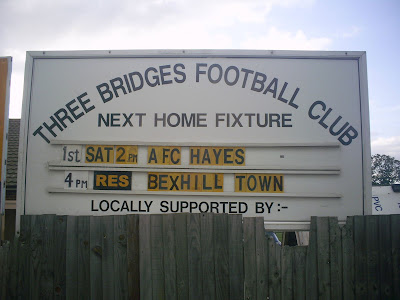 This is the entrance to the ground. 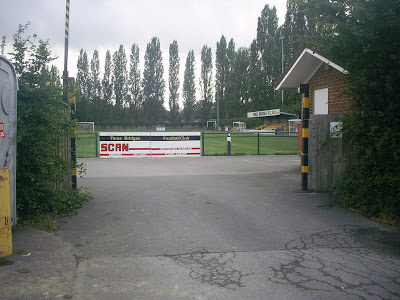 The club sign a little closer, with the stand to the right. 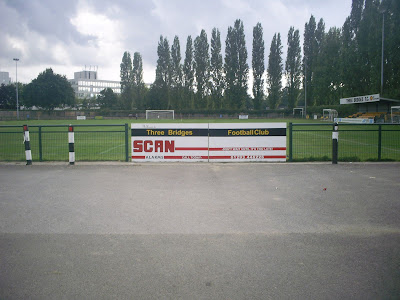 This is the hut from where they take the gate money. 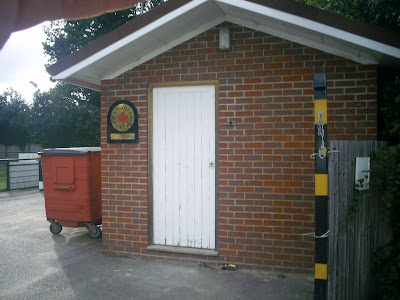 This sign caught my eye, as Canadian Spa Co. have also sponsored one of my other sporting loves, the ice hockey team Streatham Redskins. 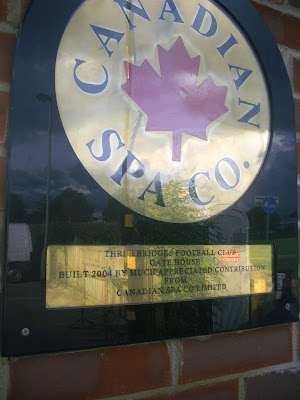 On entering the ground I turn left, going clockwise. It's open standing behind the goal, with the car park behind. 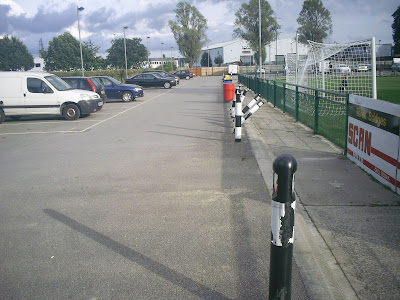 From here you see the stand to the right, 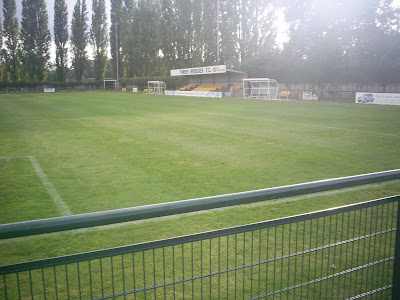 And the changing rooms & social club complex to the left. 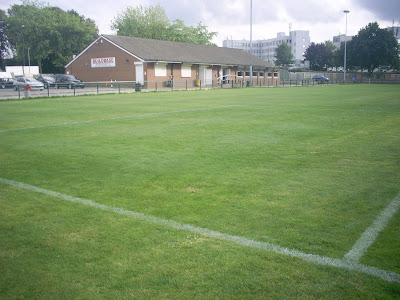 This hard standing area is along the side, leading up to the main club building. 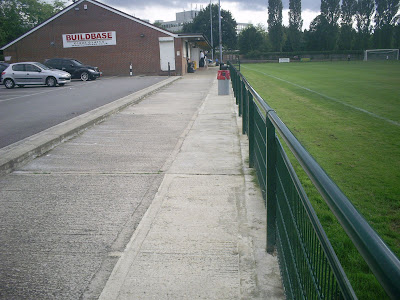 A look back behind the goal. 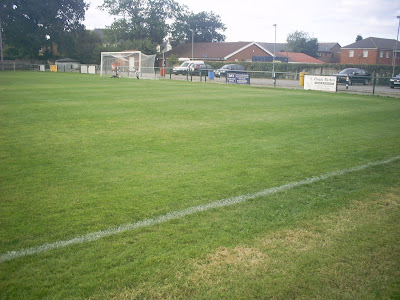 in front of the bar area. 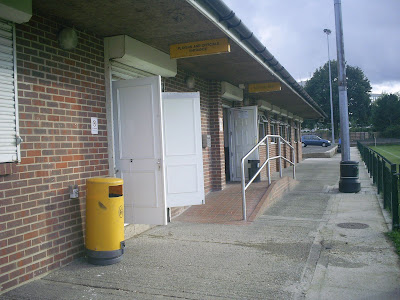 With a glimpse down the players' entrance. 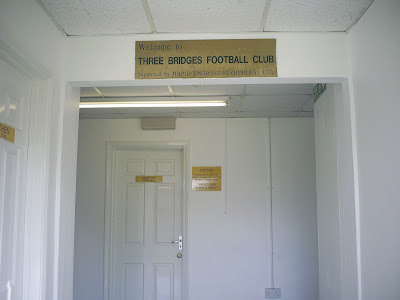 Just past the building is more car parking space, which can 'double up' as a strep of terracing. 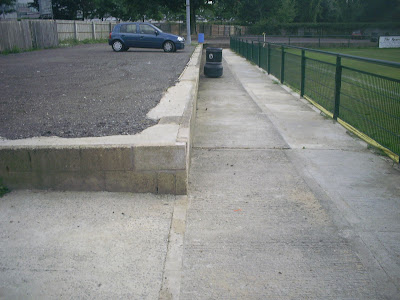 With similar behind the far goal. 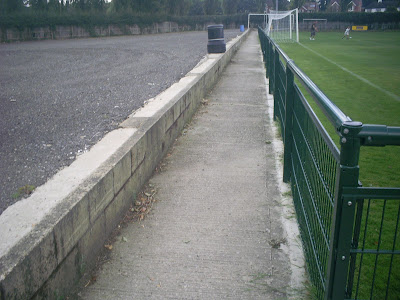 From the same spot we can look back down the clubhouse side again. 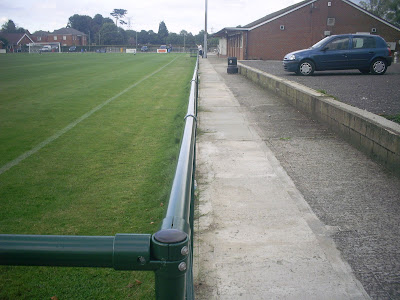 And also look across to the seats. 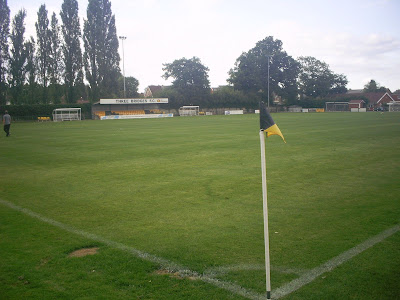 This is the view down the other side of the ground, from the far corner behind the goal. 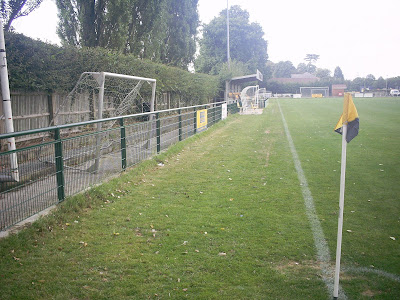 Smart new dugouts. nice, but give me rickety wooden ones any day! 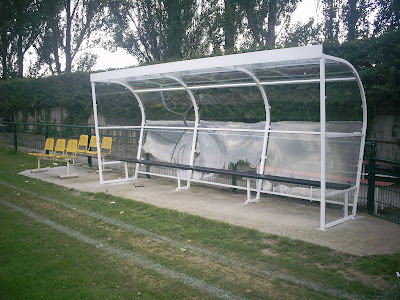 Modern, but still distinctive. An adequately sized stand for their level. 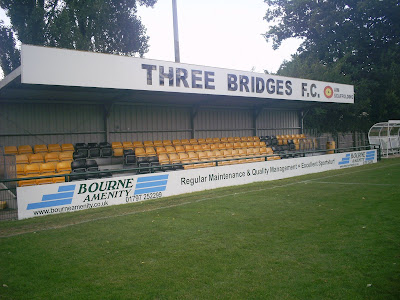 Inside it, from the other end. 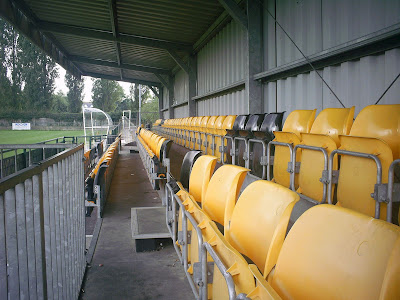 With some proper, shallow terracing just past it to the corner. 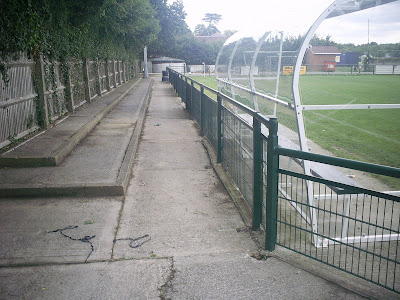 Back behind the goal again, turn left out past the brick entrance building. And then across the park, to the station, no more than five minutes walk away. 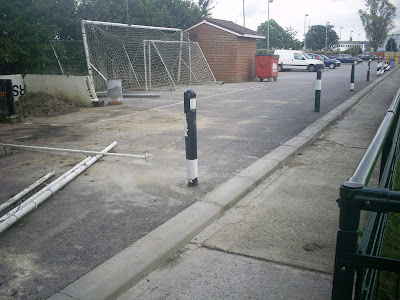