There's a saying in football that you're only as good as your league position, and no matter what level I think Dulwich Hamlet should be playing at, the rable does not lie. And we have been stuck in the Ryman League Division One South for a bit longer than I expected. With the introduction of the Conference South more and more what I term as 'natural county league clubs' are progressing upwards. Maybe a bit harsh from me, but I am a bit of a 'footballing dinosaur' at heart, & prefer to play old, established 'traditional' clubs.

Walton Casuals are a club slowly but surely moving onwards, but never in a million years can I ever see them progressing further than the level they are at now. But how I have seen them progress. For many years their First Team competed against other Reserve sides in the intermediate & completely second string Suburban League, until they took the plunge & got senior status. My first visit here was to watch their First Team play the Hamlet Reserves over twenty years ago, when this was an open field, and no more than a roped off pitch, with the bar and changing rooms in the same corner. No proper bar, but selling cans of beer, presumably because they never had a licence back then. Without doubt this is now a nice little ground, & more than adequate for their crowds and level. On the night I took these the attendance was 106, with around 30 making the trip from Champion Hill.

It's not one of my favourite grounds, mainly because of it's location. A good 40 minute hike from the station, and no bus service for night games! If you're here in daylight at least it's a pleasant walk to the ground from Walton town centre, if you make a slight detour & head to the river, then walk along the banks of the Thames. 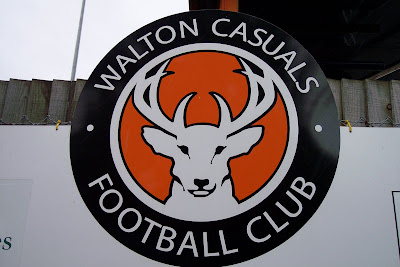 The entrance is on a small road, right by the banks of the river. 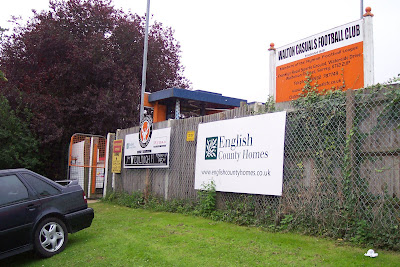 I doubt if you'll find a smarter turnstile block in the division! 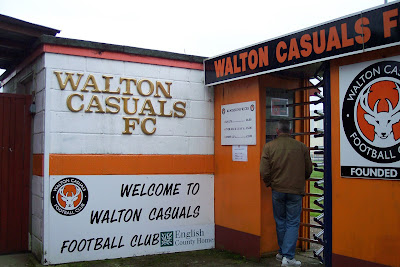 As you come through them you see the back of the dugouts, and a nice sign telling you where the bar & tea bar are. A nice touch. 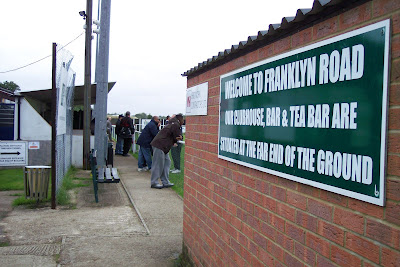 Going round in a clockwise direction there a a hard surround, with a 'covered shed' on your left.

But before that you pass these two benches. I can only wonder if they were the only seating from the days before they built the modern stand on the far side for ground grading purposes. 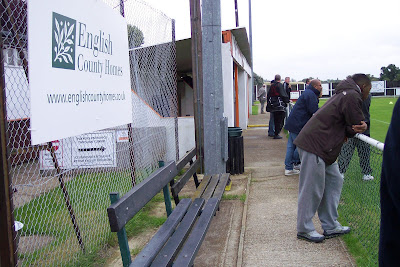 I called this a 'covered shed' because you can't really describe it as a 'covered terrace'. I'm not sure how to describe it actually. It hangs out from the changing room area, and there is a section like this either side of the players' tunnel. 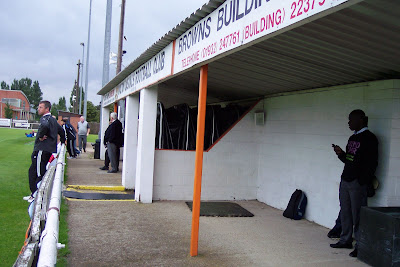 Past this and the walkway continues to the corner, with the bar area on the left, behind the chain link fence. 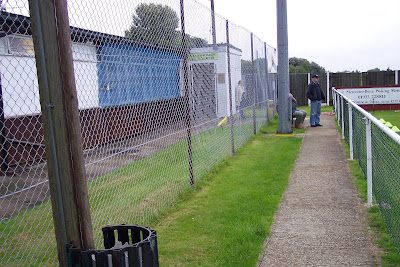 From this corner we look across the pitch. You can see the seating area on the far side; and that ugly building up the far end is the local sportscentre next door. 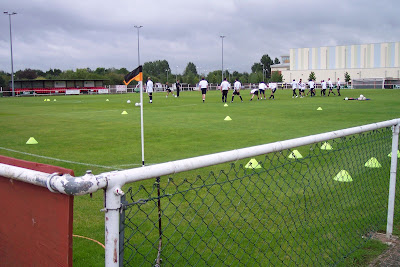 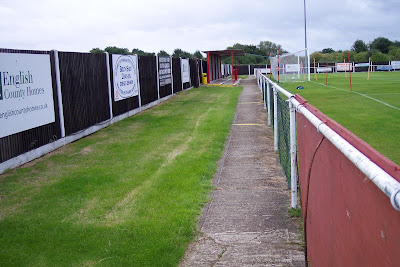 Before we see that terracing we look back down the side, to get another look at the cover there, and the brick dugouts. And here is the terrace. Why you're not supposed to stand at the front I have no idea! Bleeding 'Health & Safety Police!' ;-) 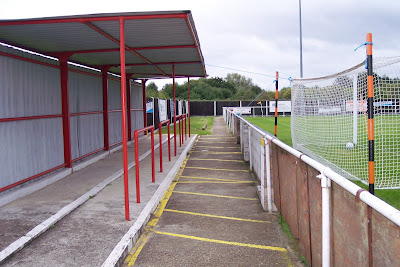 Past this is the path again. strangely there is this 'one step' wooden sleeper, to make some sort of 'step of terrace'. It's the only one in the whole ground. Why? 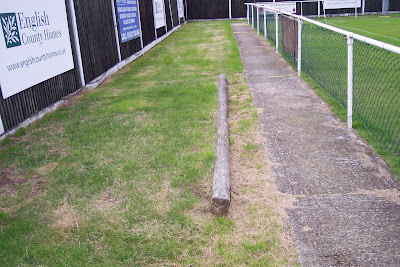 Our first look down the far side. Open, apart from the seating in the middle. If I knew how to I could 'airbrush out' that sportscentre. Shame that's not possible in real life! 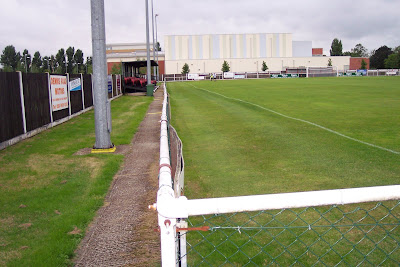 Looking across the pitch from the next corner flag. 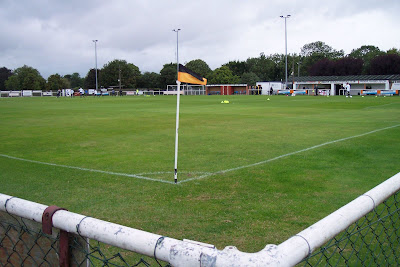 Here's a hoarding from the company that built their stand. 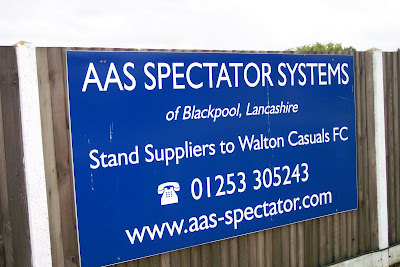 And here is the stand. More than up to scratch for what is needed. But oh so characterless. 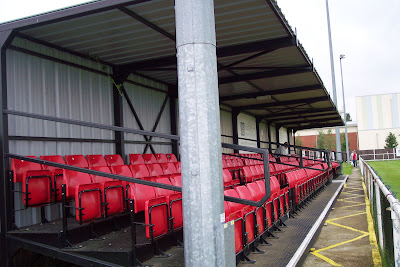 At least the officials don't get any 'posh' seats! 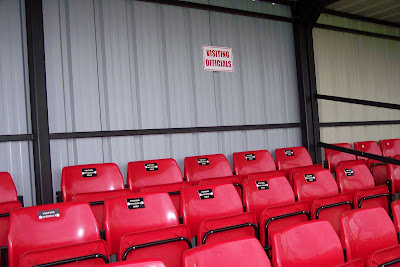 One of the club sponsors. This is a tidy enough ground, and somehow this graffiti covered sign just didn't look right. 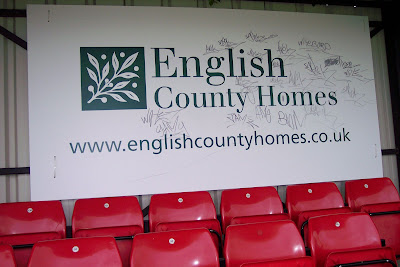 Past the stand it's the hard standing again. 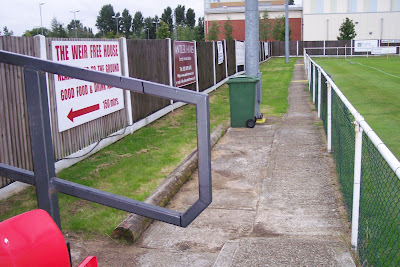 A last look back down the side, before we move on. 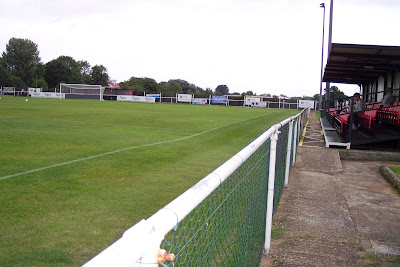 Behind the other goal it's identical to the other end. 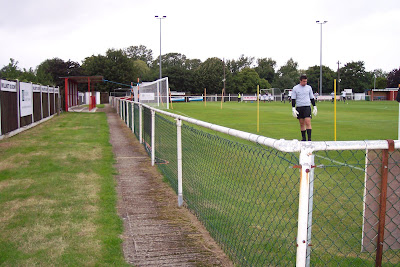 The ground may not have too much individuality, but at least they try by painting the net supports in club colours. I liked that. 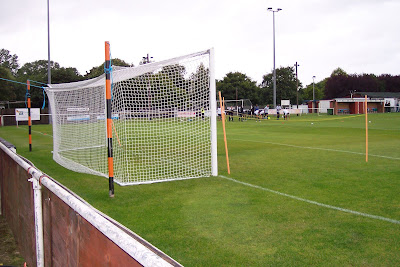 Stuck in the corner is another 'ground graders folly'. The unused turnstile block! 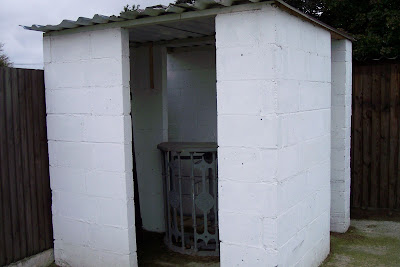 From here we look back behind the goal... 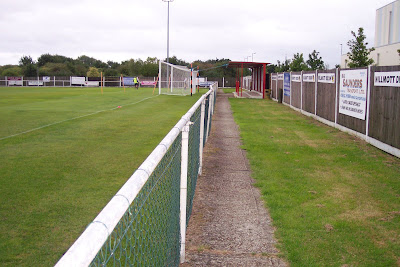 Almost overcome by the stench from the rotting cuttings from the pitch, dumped by the tractor. Why oh why do clubs do this? It stinks! 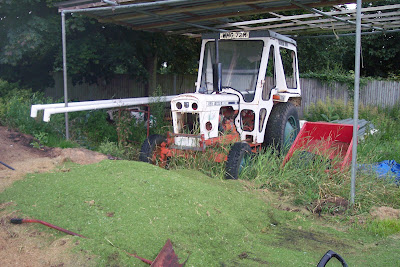 Almost back to where we came in, on the left here is a patch of grass that is used as small training area. 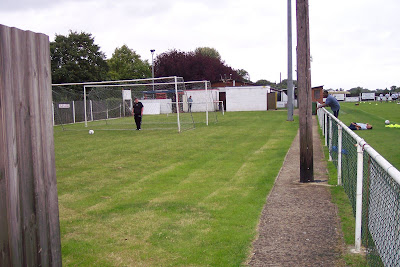 And here are the turnstiles where we came in. Tour of Walton Casuals complete! 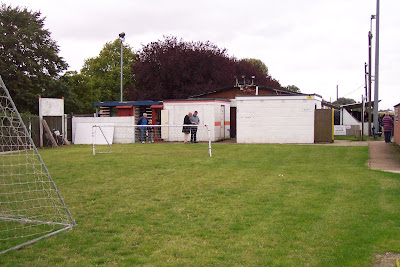