I visited the wonderful Stadion An der Alten Forsterei in Spetember 2007, for a Friday night German Third Division match against Rot Weiss Essen. The snaps are a bit dark, due to me only having an average 'digital box brownie', but 1.FC Union Berlin is a wonderful ground to watch football. My travelling mate Tony was so entranced by the place that he 'adopted' them as his German side, and has been back there since, as well as following them via the internet!
If you're ever in Berlin I would heartily reccomend trying to catch a match here. 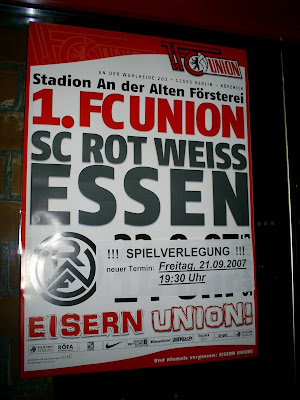 We entered from a corner, & down the left, was the open terrace, where home supporters stood. 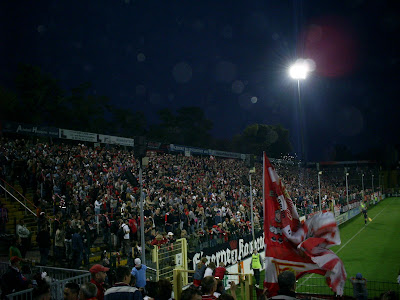 We stood behind the goal, & this is a shot of that end. 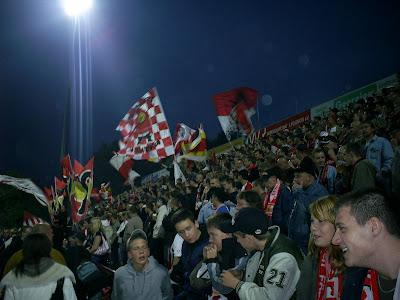 From our spot we turn right, looking over to the seats, running the full length of that touchline. 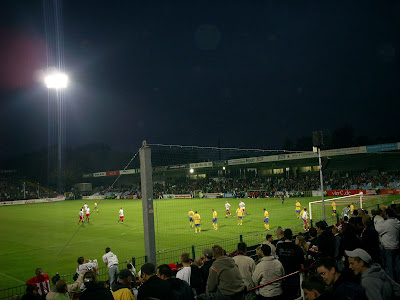 Another glimpse of the home fans behind the goal. 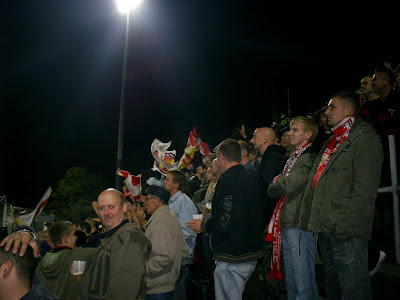 And down the terraced side, again. 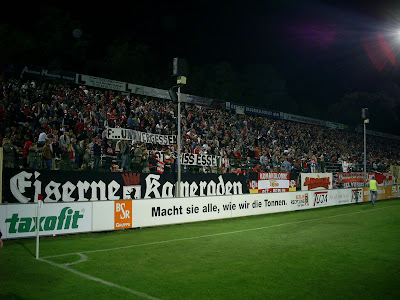 Back behind the goal, and a look up the terrace, from the bottom. 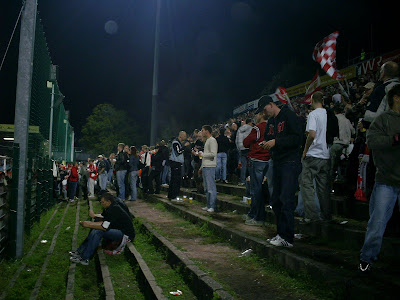 From this corner we see the main stand again, and the open terracing at the far end, where the away fans are situated. 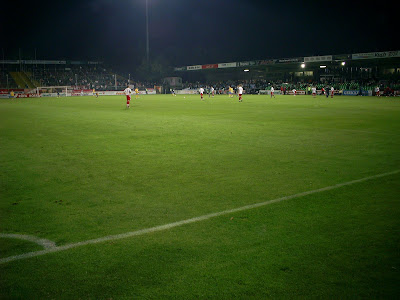 Some of the home flags, in the corner where we entered. 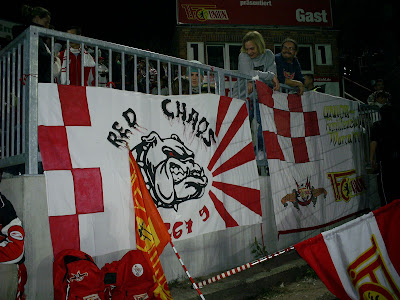 From up on that small raised area, another look across the pitch. 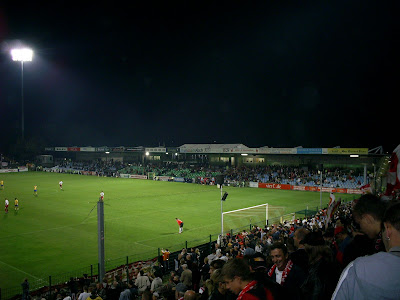 And down the side once more. 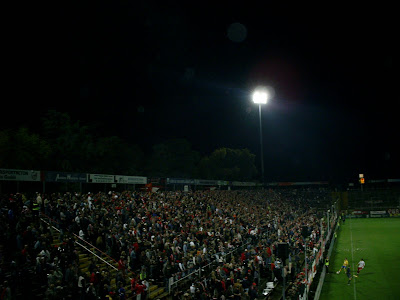 Looking down, further up the terrace, behind the goal. 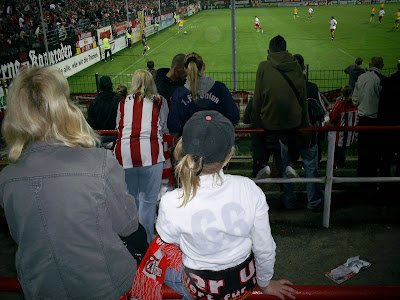 The scoreboard, in the same corner, behind the goal. 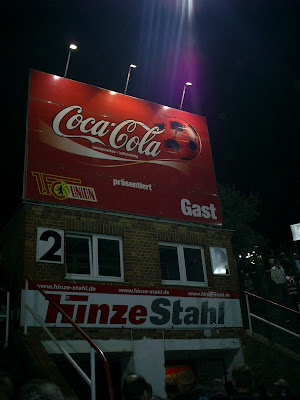 The packed side terrace again. 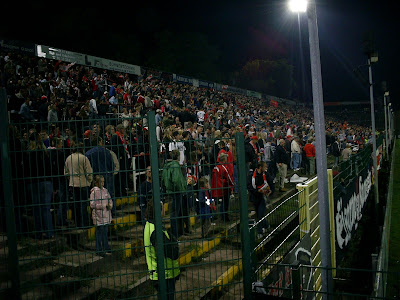 Not much room behind the goal either! 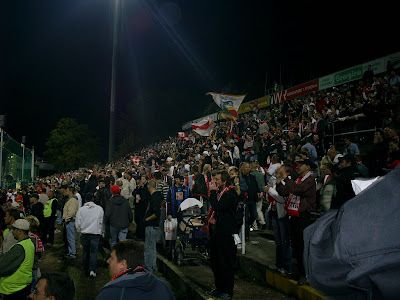 Showing their support at the final whistle. 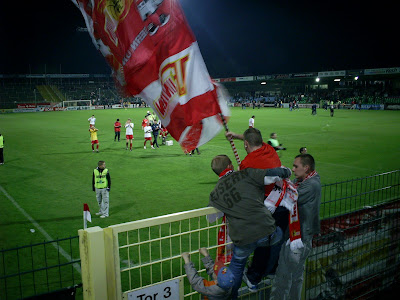 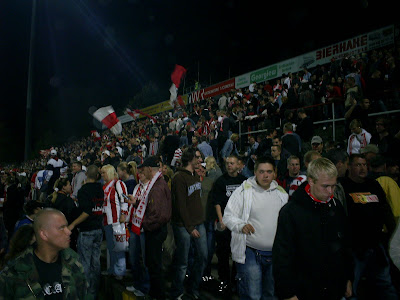 This is the open terrace at the far end, the away fans were in the far corner. 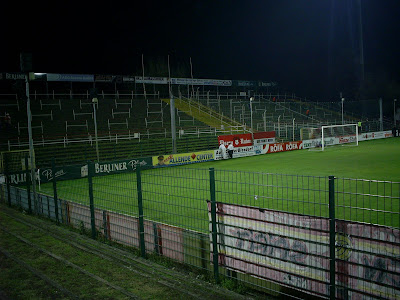 Here we see the now empty terrace along the side. 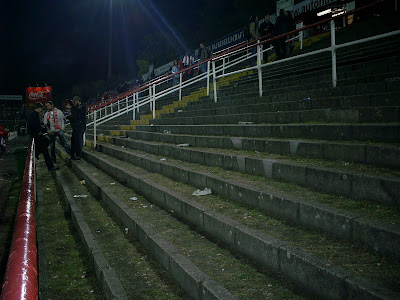 And across the pitch to the seats. 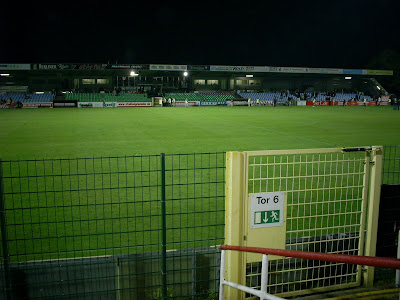 A nice shot of the emptying home terracing. 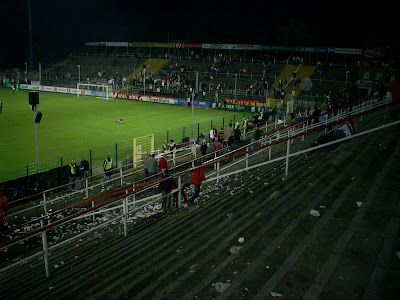 Still soaking up the atmosphere I suppose! 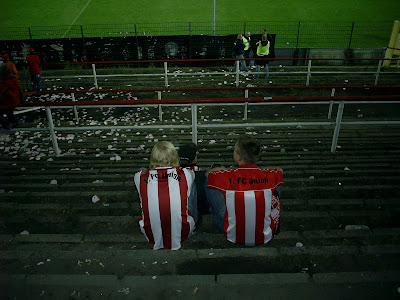 Another view of the side and far end terracing. 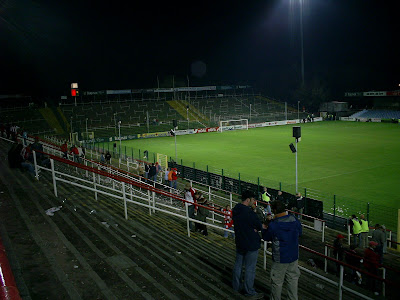 I've no idea who he is, I just asked him if i could take a photo of his jumper! 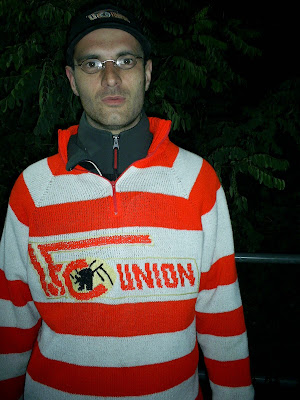 There is an exit in the corner where we entered through a small tunnel under the terrace. There is some sort of 'sponsor a brick' scheme here. 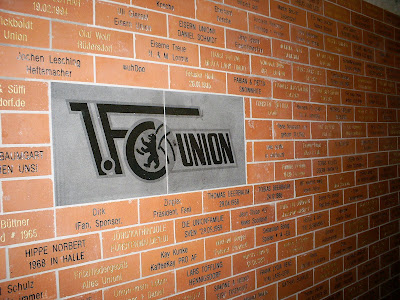 A dark shot of a tunrstile block, as we leave. 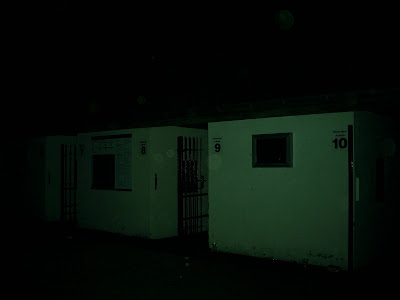 And a club van parked outside. 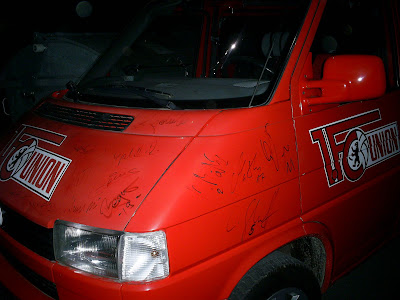 1 FC Union Berlin are a wonderful club. It is always enjoyable to walk through the forest to the ground on a match day. The ground has now be re-built on 3 sides (not the main stand) with many supporters helping. There is a monument to the supporters who gave their time during the re-build.
Having been to see a few games at the new ground i'd say i probably enjoyed going to games at the old ground more. This might be because Union nearly sell out every home game (16,000) now and it's jammed packed. Though I saw a german cup game (2007-2008 season) against Eintract Frankfurt in the old stadium and there were 14,500 there and (compared to the new ground) there was alot more room to move around.