I would have had no idea whatsoever who play at the Trois Tilleuls Stadium, if it wasn't for the excellent Football Grounds of Brussels group on Facebook by Stephane Lievens. His site has been a HUGE help on me locating grounds to photograph whenever I've been to Belgium over the last year or more, & he has been a superb, always replying when I've messaged him.

When I looked at this ground in February 2009 I couldn't see any mention of which club used it as their ground, & it was through his Facebook group that I know it is RRC Boitsfort. They appear to play at the second level of the local Brussels area leagues. I'm not a fan of running track grounds for football, as regulars will know, but this one has some magnificent old terracing, as you will see.

Here is what Stephane said about the stadium on his Facebook group:

"WATERMAEL-BOITSFORT, Stade des 3 Tilleuls Avenue des Nymphes 1a, 1170 Watermael-Boitsfort Current club : RRC Boitsfort (2nd Provincial division) www.rrcboitsfort.be The stadium was built in 1948 and could host 40000 spectators. Famous Racing Club de Bruxelles moved here from their Uccle home but in 1954, they were forced to leave as they could not pay the rent anymore. It was an ambitious plan as the stadium hoped to host international matches (they hosted a few) but the location in a corner of South-East Brussels difficult to reach by public transport and the lack of parking space (the ground is located in a residential area) meant that it never fulfilled the ambitions. Today, it is mainly used as an athletics stadium and is the home of local side RRC Boitsfort. "

This appears to be the main entrance to the ground, it looks impressive already! 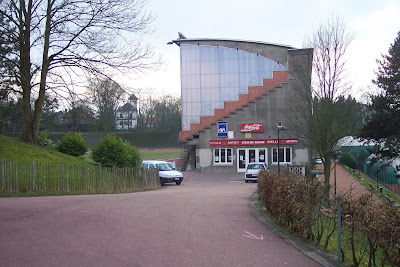 This is the view of the stand from behind. 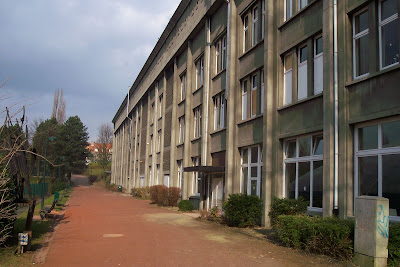 There is this sculpture behind it, there was a small plaque on it, though i'm not sure what it's supposed to represent. 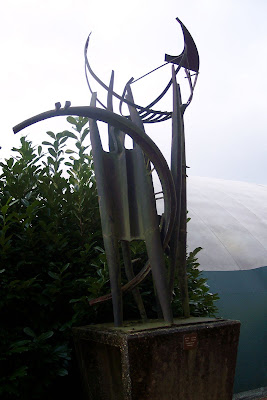 I'm going to walk round the ground, clockwise, from the main entrance, going to the grandstand last of all. Here we start on the large terrace, which stretches round three sides of the stadium. 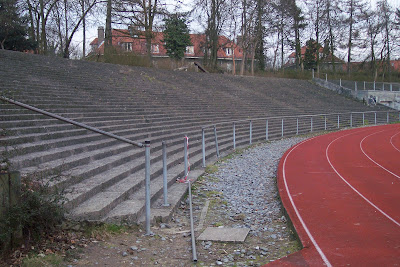 This area is directly behind the goal. 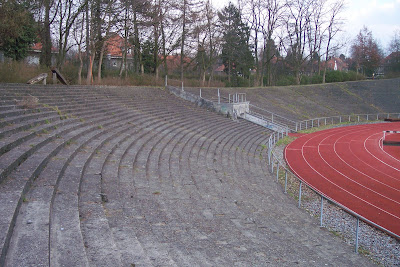 From here you see how impressive the stand is. 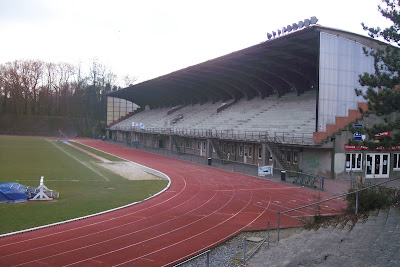 Up on the terrace behind the goal we look across the pitch. 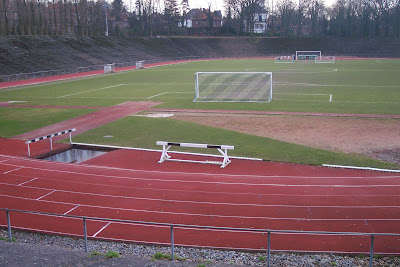 There is a raised area in the centre, not being 'au fait' with athletics tracks, I'm not sure of its significance. 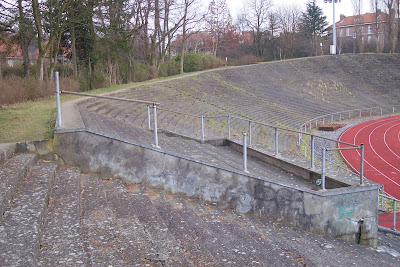 Standing on this balcony we look over to the stand again. 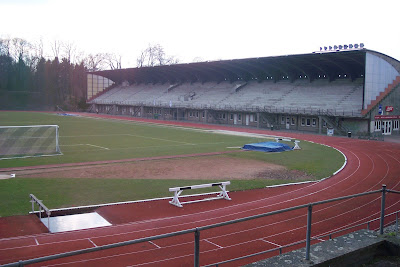 Now we get our first proper sight of the huge bank of terracing along the side. 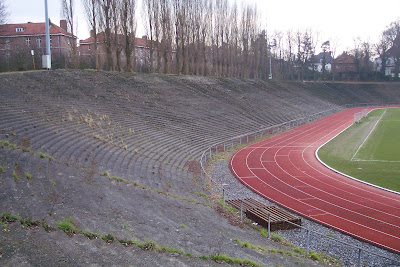 The dugouts seem a long way away! 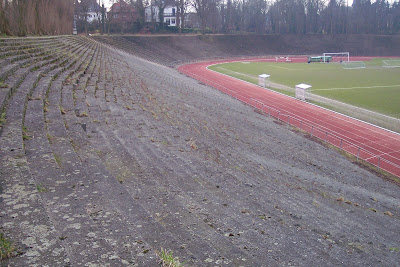 We see them here, as we look across the halfway line. 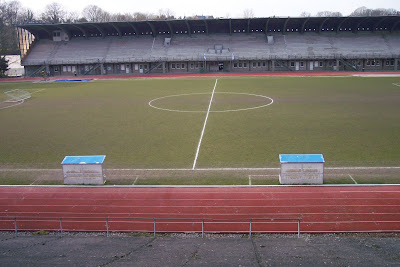 Here we reach the curved bank of terrace behind the other goal. 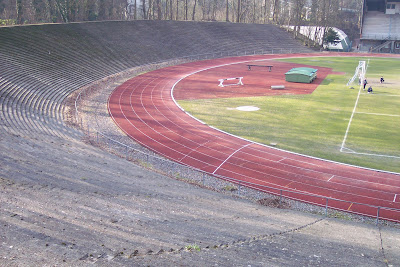 Before anyone asks... this photo is deliberately wonky! It was one of my attempts at an 'arty farty' snap! ;-) 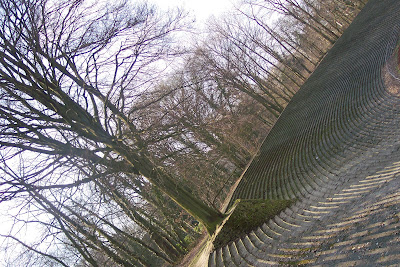 Another angle of the main stand, this time from the third side. 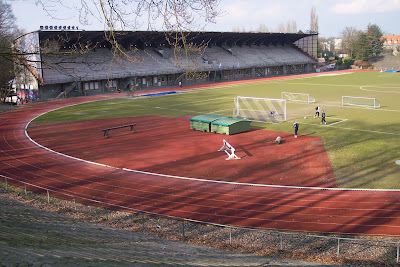 Another shot, but one that shows the expanse of terrace. 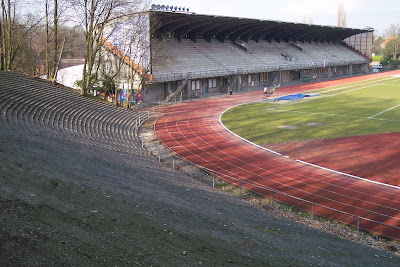 Now we reach the stand itself. There is some graffiti on the side, but this appears to be 'official' artwork. 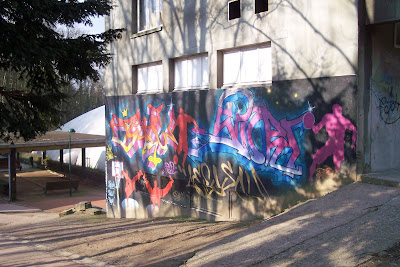 But up in the stand this IS graffiti. 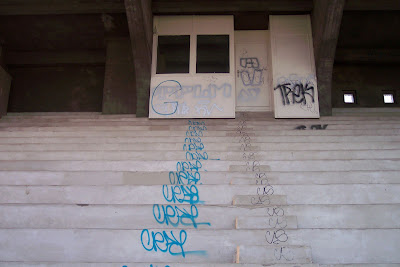 The curved concrete roof impressed me. There are no seats, I don't know when the old ones were taken out, or if there are plans to replace them. 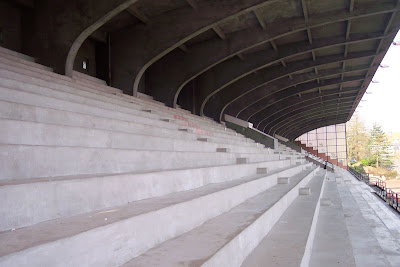 From up here we look over, & see how steep the terrace is. 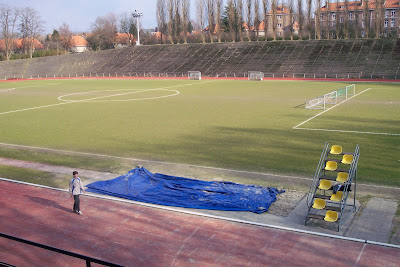 Up in the stand we look over to where we started our tour around the stadium. 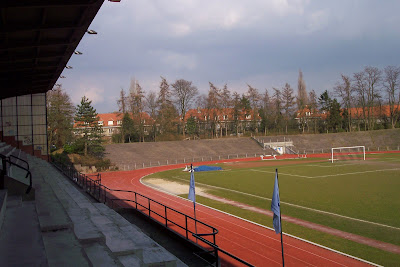 Behind the stand is an all weather pitch, & other open air sports facilities. I don't know, but presume, this is part of the same complex. I didn't go down to this pitch, but took a couple of snaps from the footpath above it. Railed off down one side, with a small stand in the middle. 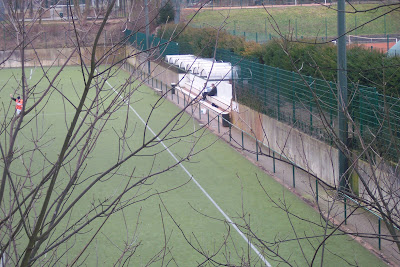 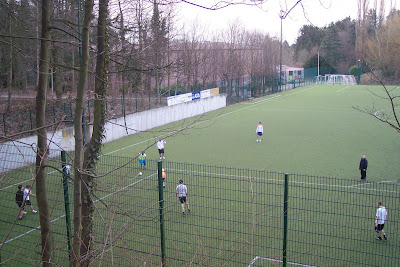