Farleigh Rovers play in Division One of the Combined Counties League, & I visited here during the recent cold snap. There was a game on that day, but I didn't expect it to play, & it didn't!

I've been here a few times before, for Dulwich Hamlet pre-seasons, and Junior games, but not for a good few years. 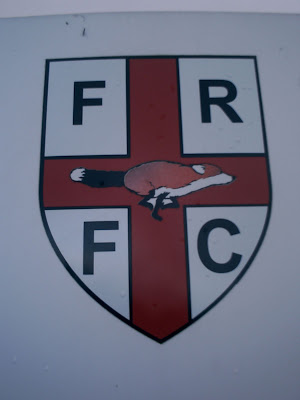 This is the 'approach road', if you can call it that! I once got a lift here for a Dulwich Hamlet Under 18's Junior game, & my driver hammered her car down here, taking great delight as us passengers bounced our heads off of the roof. She didn't care about any possible damage to under her motor, as it was a hire car, with her one being in for repairs! Good to see it hasn't been tarmaced almost twenty years later! 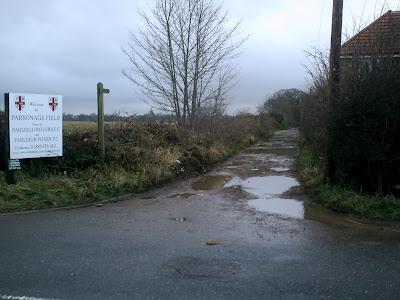 It doesn't get any better as you approach the pitch. 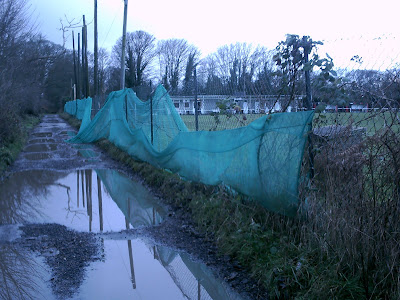 Half way along that green netting is a gate, so I used this to gain entrance, and this is right behind the goal. The goalmouth is frozen, as you can see, but to be honest, the rest of the pitch is playable. Maybe a few hot kettles over the area & a couple of large sponges would have done the job... Actually I just made that up, but I wonder if anyone has tried that to get a game played? 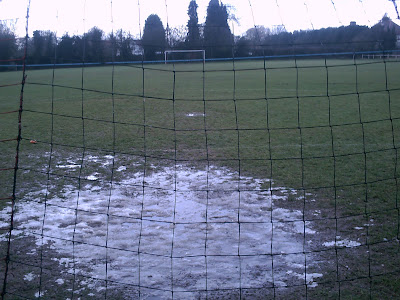 Running down the side to our left is all the club facilities. The bar to the left, and then the changing rooms. 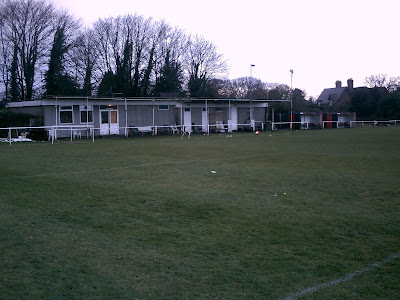 A 'corner flag' shot with a difference for me...one down the touchline, rather than across the pitch. 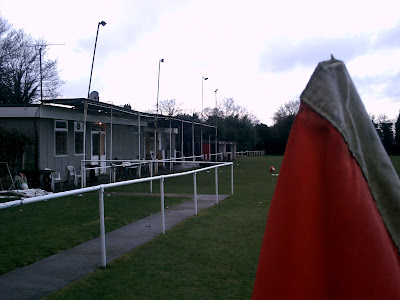 Here we see the hard standing that leads to the bar & the changing rooms area. 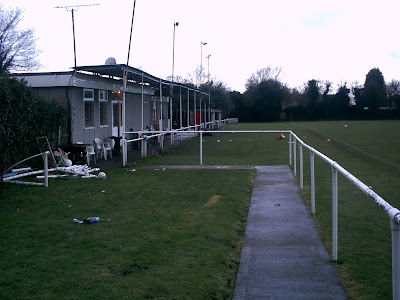 Note the overhang that doubles up as a 'covered terrace' and the benches, that 'double up' as a 'stand'! 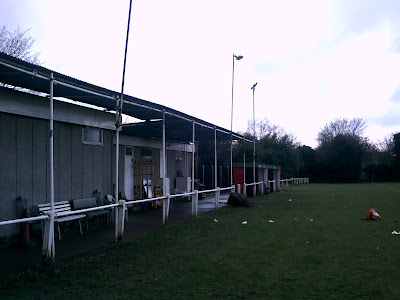 The dugouts are in club colours. 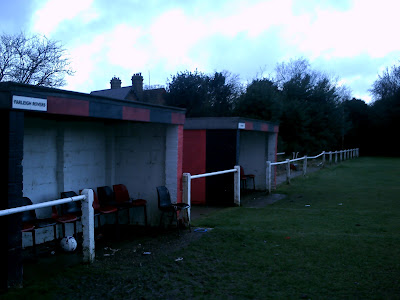 Basic training lights are up in front of the changing rooms, which are just before the dugouts, on the halfway line area. 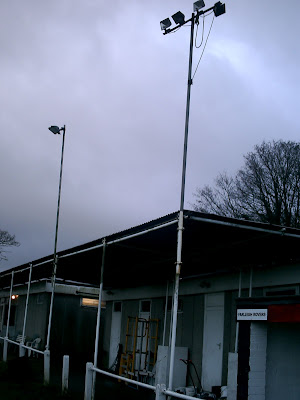 From in front of the dugouts we look back down the main side. 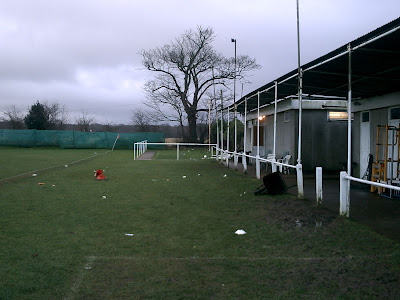 Across the pitch it's open behind the goal where we came in, no spectator standing area at that end. 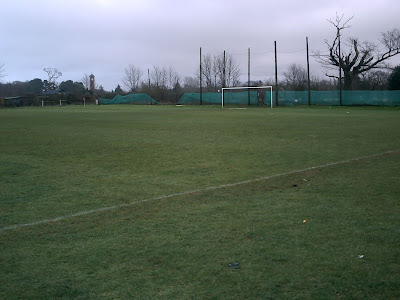 Looking over the halfway line we see it is railed off down the far side. 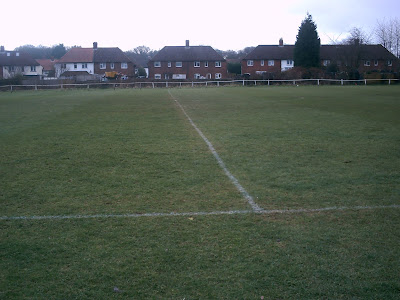 Moving on, past the dugouts, is a further stetch of hard standing, down to the corner. 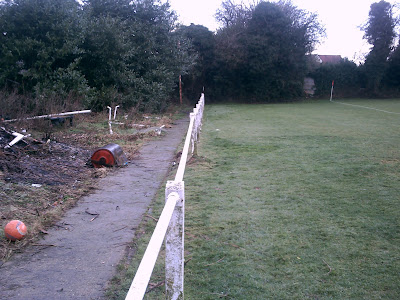 The rail seems to continue into the overgrowth. 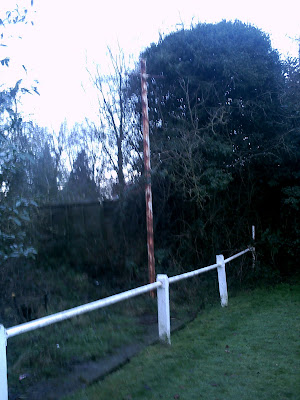 There is no space for standing behind the goal. just look at how close the touchline is to the wooded area, & the poles holding up netting. 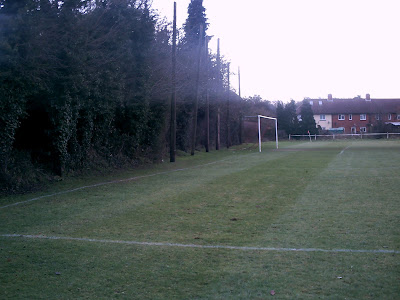 From behind this goal we look back down the main side. 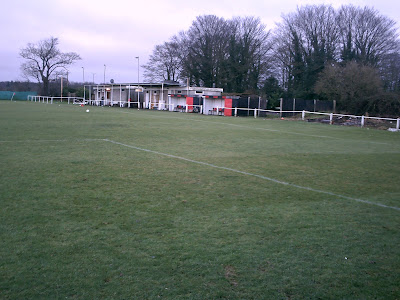 this snap is a bit blurred, but you can still make out an old roller in the overgrowth. 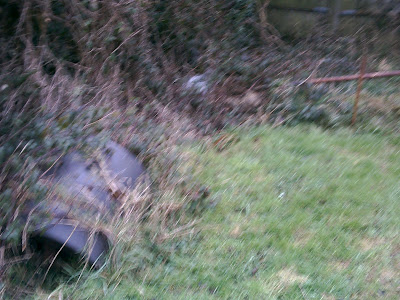 Now we're on the other side of the Farleigh ground. Simply railed off all the way along. 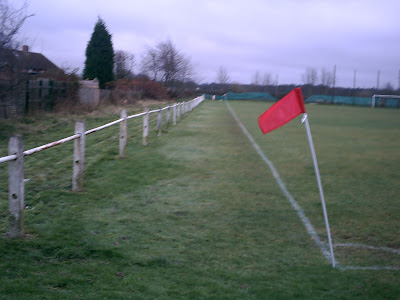 From this corner flag angle we look across the pitch. 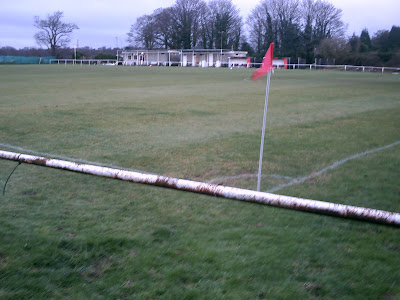 Halway line again, looking to the more substantial side. 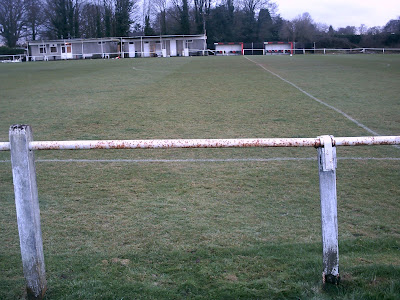 And finally to the last corner, some of the pitch rail missing. You can also see how tight the space is behind this goal, no room for fans at this end either. 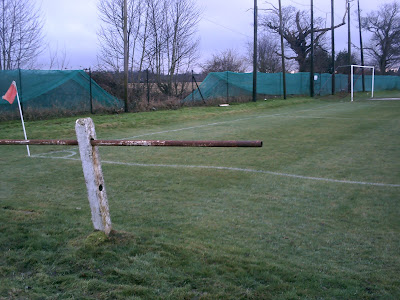 A final view down this open side, before it's time to leave. 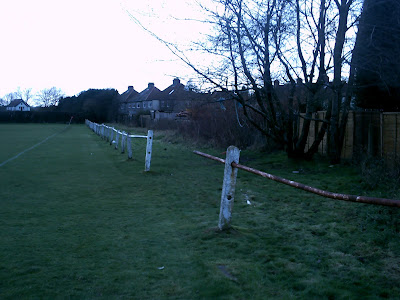 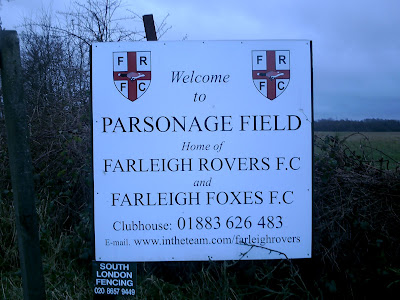