I popped along to look at the home of Motherwell on Friday 5th March 2010, I wasn't sure of being able to gain access, as I hadn't planned to go there. I'd bought a one day 'Roundabout' ticket, which covered 'Greater' Glasgow (if there's such a term for the city) by train & underground. It went out as far as Motherwell. I hadn't realised what a 'goldfish bowl' Scottish football is in these parts, & explains the not too big crowds away from the 'Old Firm'. They play in the top flight of Scottish football, the Scottish Premier League.

I was extremely lucky to get some snaps. I walked around the perimeter & found an open gate, as groundstaff were working inside. I'd barely got in when an officious woman marched out & asked "What are you doing?" Apologetically I tried to explain that I was taking photos, as it was a little hobby of mine, & I was up in the area for the weekend. She said I shouldn't be here...how did I get in? " I pointed to the open gate I walked through & said "Erm...through that gate!". She said it should have been locked & that I would have to leave. I apologised again & asked if I could take a couple of quick pictures before I left, & snapped walked along toward the middle of the side I was on before she could refuse! She was too busy on her mobile, phoning the groundstaff on the other side telling them off for leaving the gate open!

Now I know I'm unlikely to return to watch a game here, but if I were to return to the Glasgow area I'd opt for, say, Partick Thistle over Motherwell, as when I went to Firhill last year they couldn't have been more friendly in their welcome. First impressions count...Motherwell could do well to remember that; as 'Mother' wasn't 'Well' but 'Quite surly'! 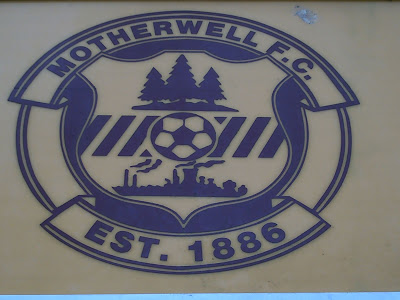 First of all we are going to see the outside of the ground. Here is a set of turnstiles in the corner. 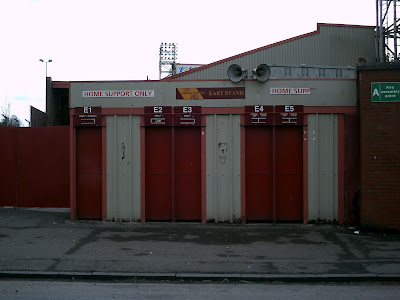 They are at one end of the Davie Cooper Stand. He was a former Motherwell player who died of a brain haemorrhage in 1995. 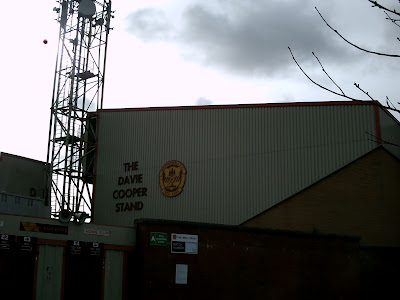 Further along, behind the same stand, is this forecourt. The club shop is through here. But we're not going in here yet, time to stroll round the other side. 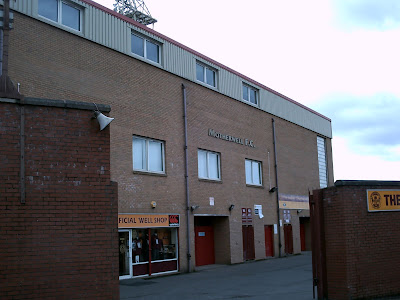 On the next bend is the side of the next stand named after another Motherwell favourite, Phil O'Donnell, who died too young. 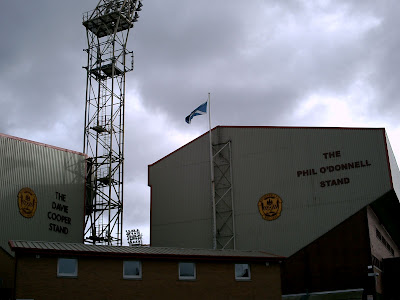 There are some sort of club offices here, & a ticket office. 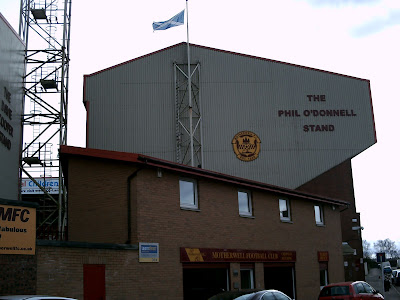 This is behind the Phil O'Donnell Stand. Here we see the main entrance. 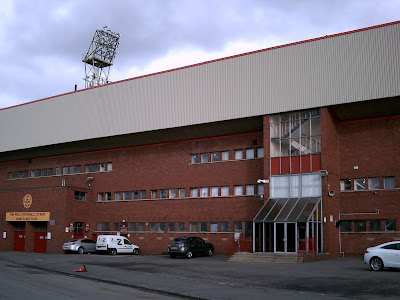 Back round the other side now, through the open gates, and this is the club shop. I didn't go inside as I had no spare cash to shop with. But I will pop back when I'm up in Glasgow at the end of May, to buy myself a scarf. 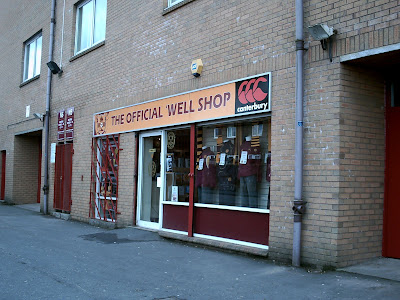 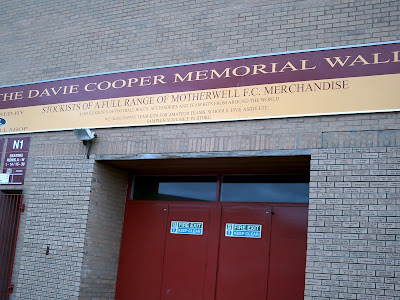 Here is a close up of some of them. 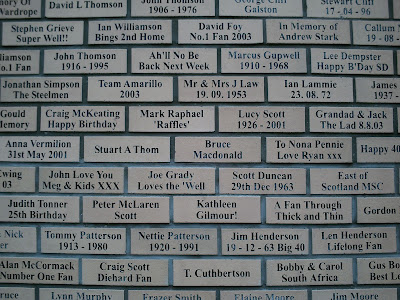 The obligatory set of ground rules. Couldn't to bothered to read them! 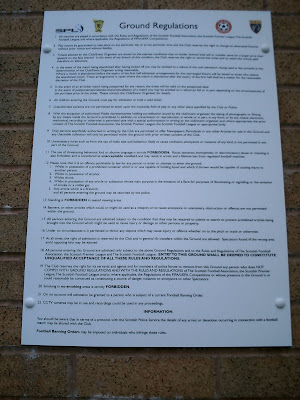 Just past this wall was the open gate, & I was suddenly pitch side, from this corner. 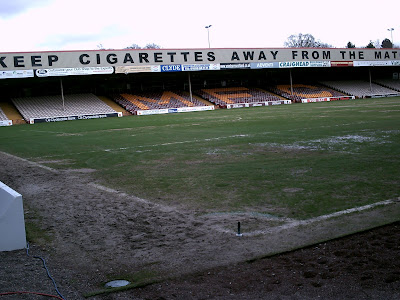 A similar shot, getting in the other end of the advertising across the roof. 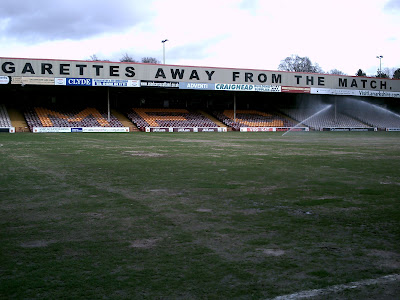 The was the stand at the far end, I've not heard of the Lanarkshire International Children's Games 2011, but apparently it's been endorsed by the Olympic committee. To the right you can just see a terraced paddock, in front of the Phil O'Donnell Stand. This is the Davie Cooper Stand, behind the near goal. 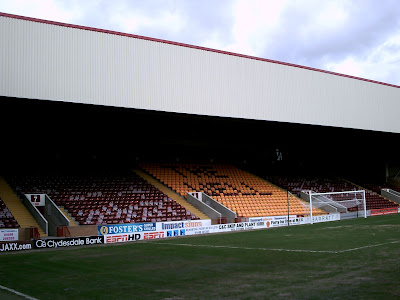 And here I manage to get a picture from the front of the Phil O'Donnell Stand. 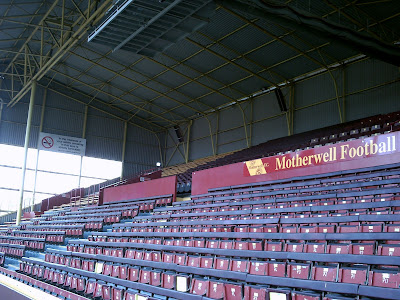 This is from on the steps leading up into the middle of the stand, and you can see the dugouts at the front. 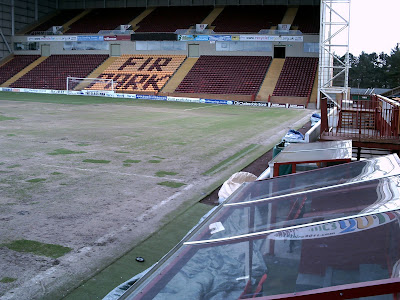 This is the rest of the Phil O'Donnell Stand, to my left. 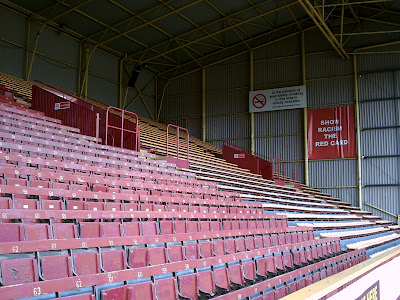 Another shot, slightly higher from the steps, of the Davie Cooper Stand. 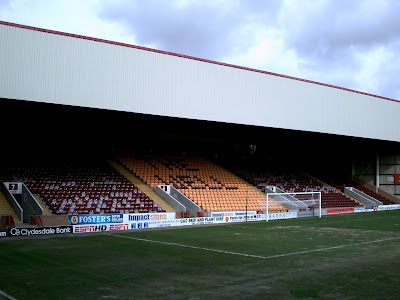 Those were the steps, as we see the terracing in front of them. And that concludes my somewhat brief tour of Motherwell. 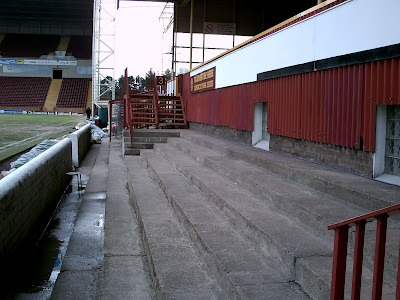 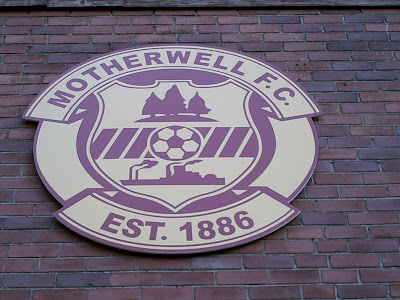