I saw a match here back in October 20004, which was my first 'solo' trip to Prague, having been there twice before that, firstly with the Dulwich Hamlet Supporters' Team, and then returning in the Autumn of '03 with two Hamlet supporting friends.

FC Tempo was the first 'non league' ground I went to in the Czech Republic, as in below the 'fourth division' level. There are two pitches here, the lower one was being laid/renovated on that trip, & the game I saw was on the higher pitch. It was a strange experience, for during the game not only did a local drunk wander in, who seemed to be well known, who was swigging direct from a bottle of wine, but a birde & groom, in full wedding regalia, turned up for the second half! Presumably he was a player. Sadly these were pre-digital camera days for me, so I can't show you those snaps. I hope these do instead. 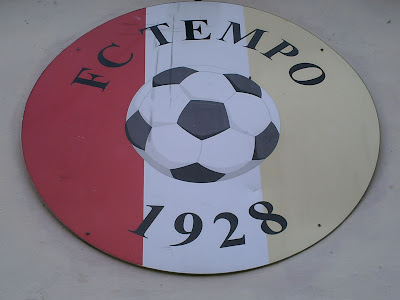 The entrnace to the ground is down this driveway. Up the banking, to our right, is one of the two pitches. 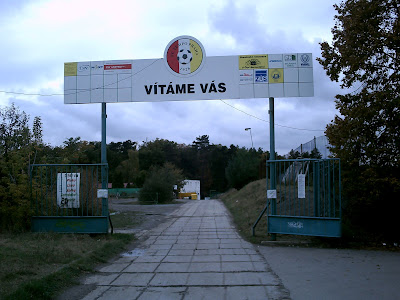 At the end of the drive is this club building, which houses the changing rooms. Behind it is the clubhouse. 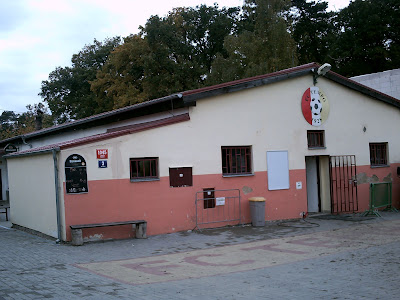 Just before those buildings is this club noticeboard, which shows the results of all of their adult & junior sides. 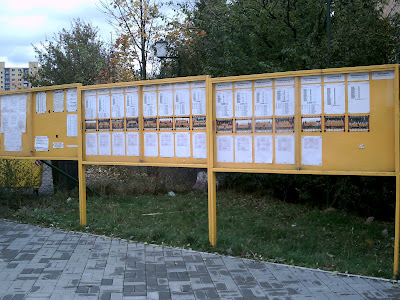 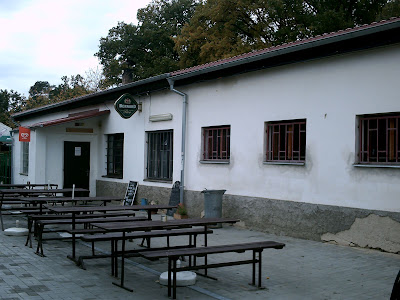 In front of the first building we saw are the pitches. This hut is the entrance to the higher one. This is the one I saw a match on, & this is where they took the gate money, & also had scarves & mini-kits, which you hang in cars, on sale. 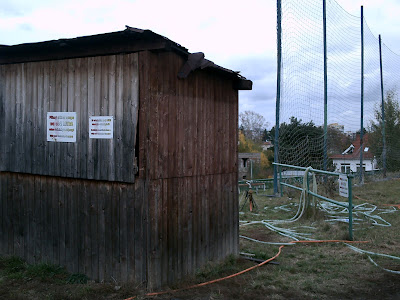 It's a basic oned sided railed off ground. 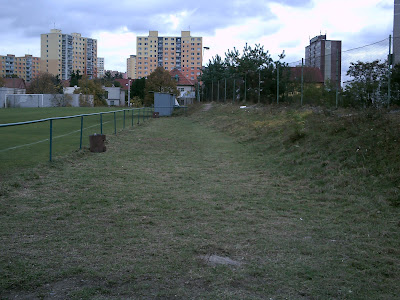 As you move along there is a slight grass bank, which is used as a vantage point. 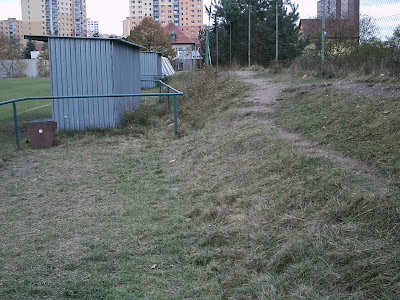 Past the dugouts it's more of the same, but a couple of benhces dumped down for seating. 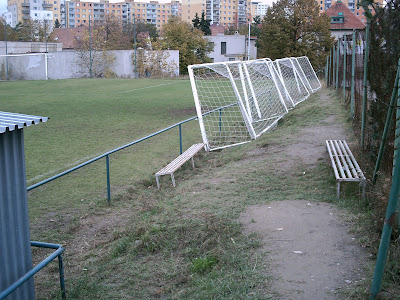 On the banking we look back past the dugouts, toward the goal at that end. 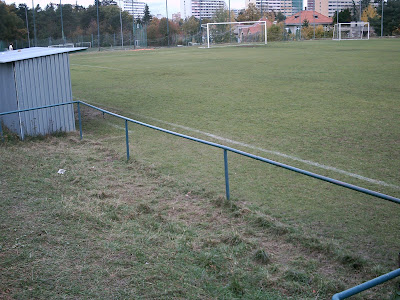 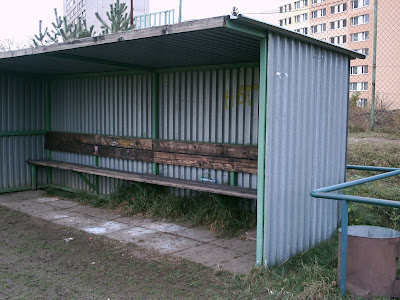 Moving back behind the goal at the end we came onto this pitch we look down at the other one, which is below us, running the same direction as the first one. 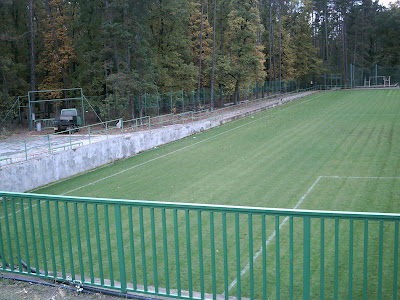 From roughly the same spot we look over to the dugouts, on the other side of the pitch. 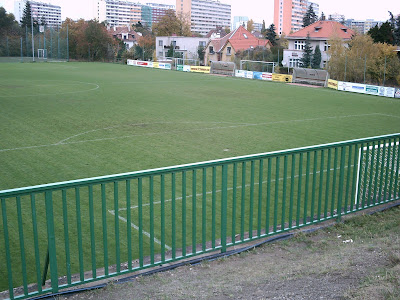 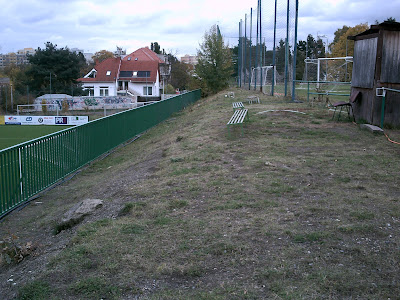 A similar shot, showing the admission hut. Note the benches, which presumably you can move to the best vantage point, depending on whatever pitch your game is on. 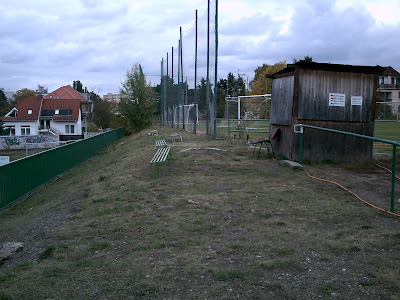 The pitch below has a concrete wall behind the goal. On it is this sign, presumably from when it was completed. 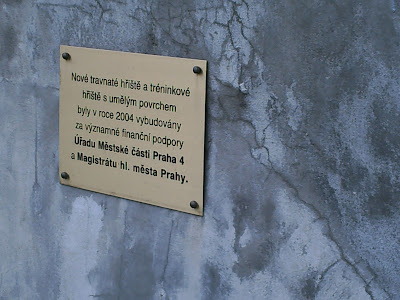 This pitch also has standing down one side. Note the slope, as the path goes down in stages, from the brickwork supporting the railings. Obviously the most popular spot, judging from all the benches. 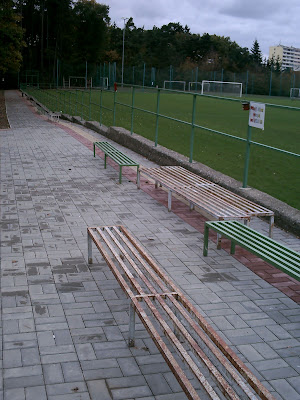 Here we see the difference in levels between the two pitches. On the wall, not noticable straight away, is the club name painted on, urban graffiti style, directly behind the net. 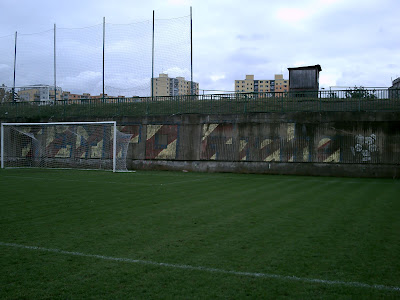 Here is one of the dugouts, much more modern than the top pitch! 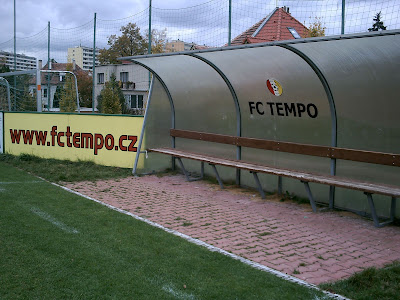 This is from in front of the dugouts, looking across the pitch, where a new building, by the current changing rooms, were under construction. And that completes our visit to FC Tempo. 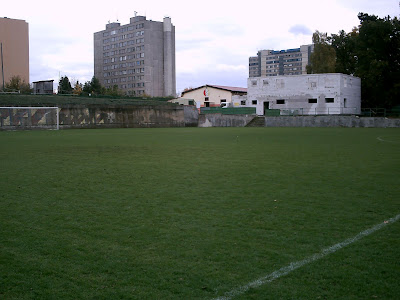