The current incarnation of Guildford City play in the Combined Counties League Premier Division. They play at, in my view, a bloody awful ground, behind The Spectrum leisure centre. That's not their fault, of course, a home is a home, I have read they are looking for alternative sites to build a 'proper' ground & I wish them well in their efforts.

I saw a game here several years ago, when I saw the Dulwich Hamlet Reserve Team play a game here, in the Surrey Premier Cup, I don't think the cover was there in the middle back then. This is-to all intents & purposes-a one sided ground at an athletics stadium, they are doing wel lthis season, challenging for the title, but I would be very surprised if this ground had the gradings to go up to the next level.

I took this set of photos toward the end of the 2009/10 season, in late March, & was on my way to see the Hamlet at Godalming Town, so I was pushed for daylight time, as I wanted to get there in time to take a set of snaps in daylight, & thus only took photos here from the main spectator side, & didn't venture round the track. 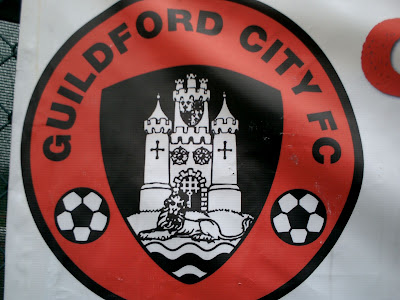 As I mentioned, the ground is part of The Spectrum complex. 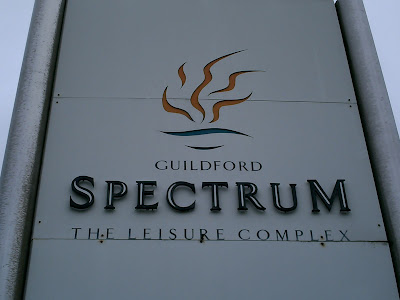 From one of the car parks we look back to the sportscentre. 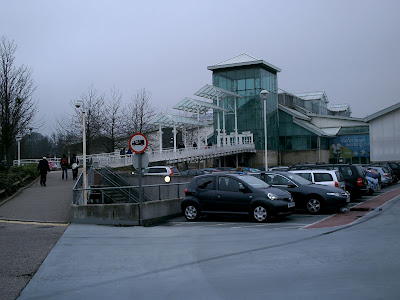 Walking across this car park we see the floodlights from the ground, which is on the level below. 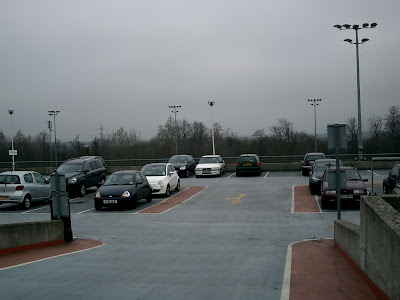 The centre is also home to the Guildford Flames ice hockey team. 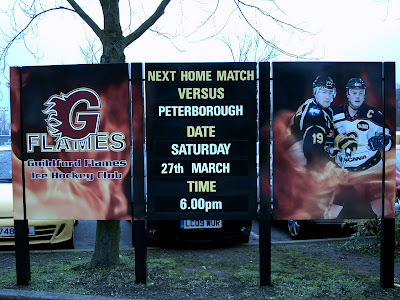 And the Guildford Heat basketball one. 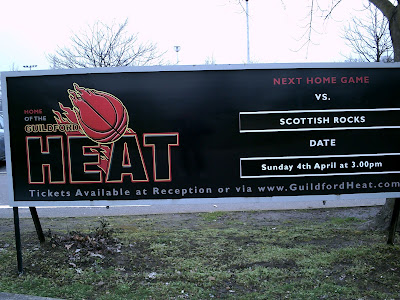 Whilst this banner on the side of the fence around the ground tells us who the local athletics club is. 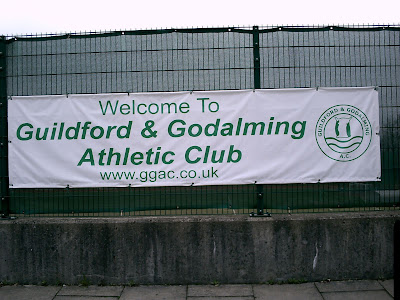 From up in the car park we look into the ground. 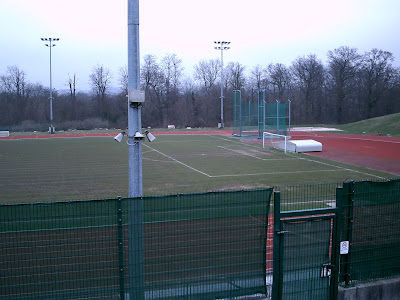 This is the other end, in the bottom left of the picture you can see the roof of the stand. 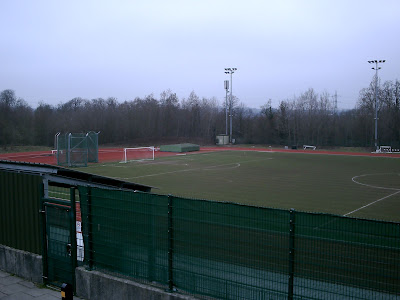 It was up on that open higher level car park where we looked into the ground. 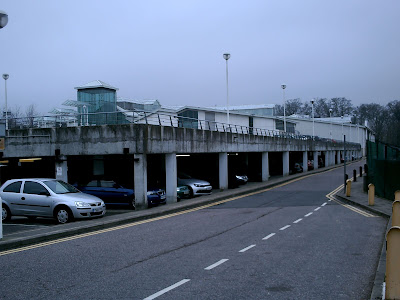 This is the matchday entrance for the football. 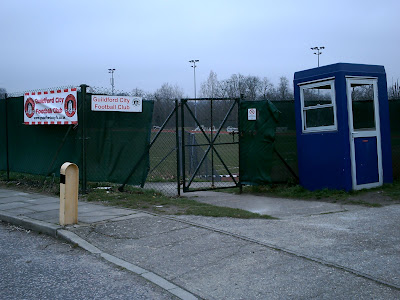 Inside now we see behind the goal, clearly no spectator area. 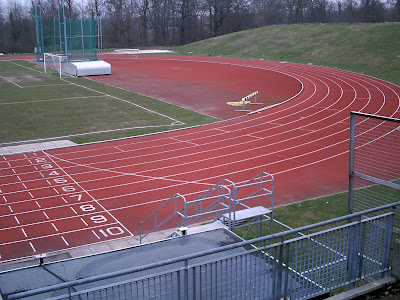 Along this main side, above the pitch & track, is 'open terracing'. a seated area without any benches really, with the covered seated area bolted on in the middle, presumably to meet Step five gradings. 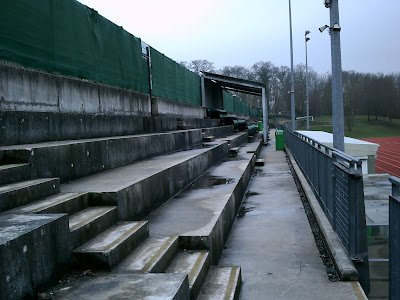 Down below we see the tops of the changing rooms, and associated athletics areas. 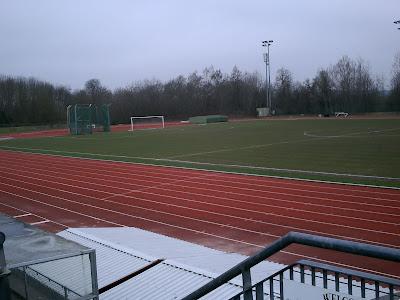 Here we reach the seating. Adequate enough, but it just doesn't feel like a football ground. 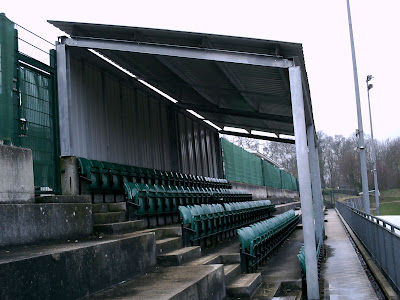 Here we look across the seats, from under the cover. 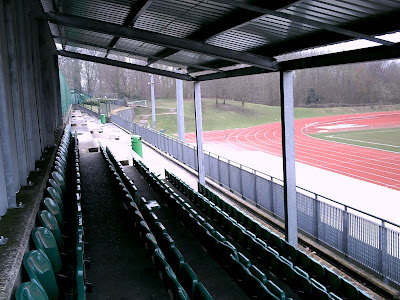 Looking over the halfway line from here, we can just see the dugouts over the far side. 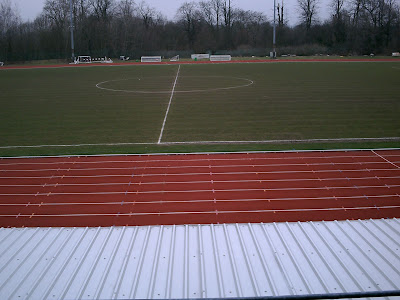 Eyes to the right, the end we've already seen. 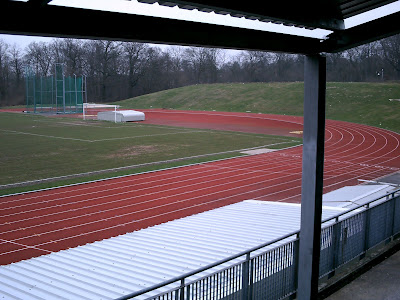 And back along the terraced steps. 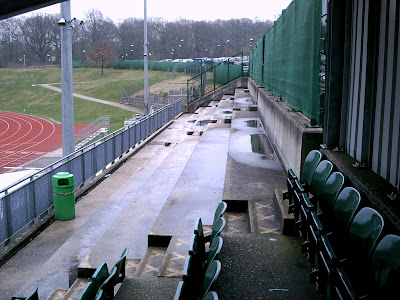 Then we turn to our left, again absolutely nothing behind the goal. 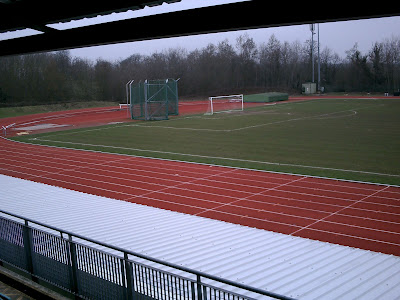 With the steps continuing along the rest of this side, past the stand. 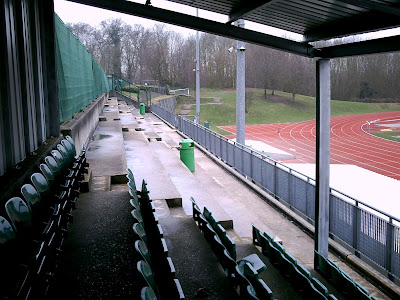 Up at the next corner the grass bank peters out, as mentioned, nowhere for supporters at this end. 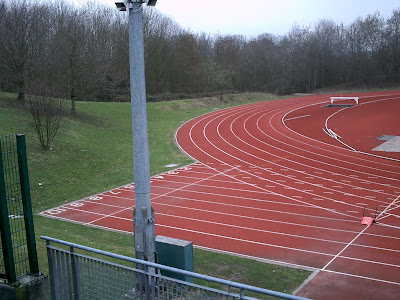 Looking over the pitch from this corner. 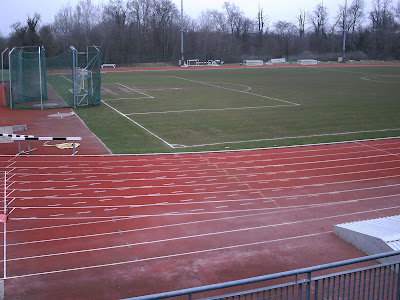 A snap down the spectator area, our 'one side' ground tour almost over. 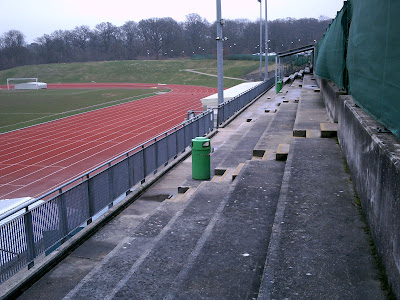 From down on the track we see how high up the seats are. 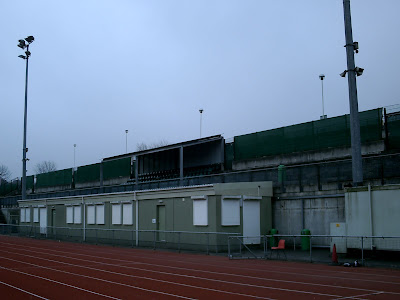 Directly in front of & below the stand. 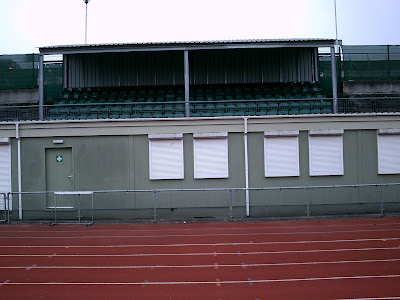 Finally, up on the grass bank at the end where we started. 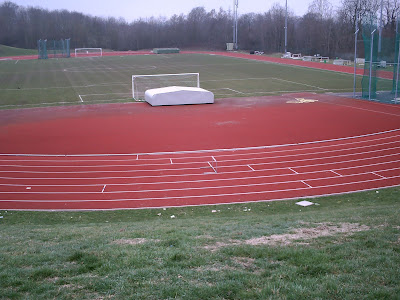 And, from up here, we look along the only side of the ground, with the sports complex behind it. 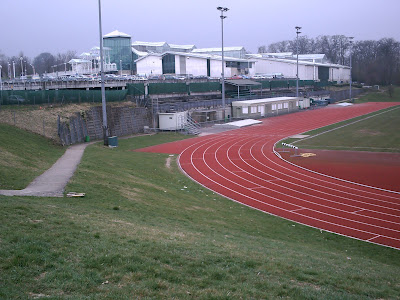 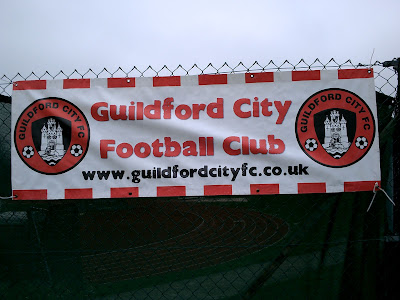 Hi, just to let you know that GCFC have carried out quite a bit of work on the venue since your visit. You can now walk around 3 sides of the ground, fencing all the way around - apart from behind the goal near the changing rooms which is still out of bounds to fans. There is also a extra stand now giving covered seating for around 250. There is a new spectator toilet block too!

Oh, and also a turnstile block too!