My first visit there was in the 1977/78 season, when Dulwich Hamlet lost there 2-0 in an Isthmian League First Division match, our first defeat of the season, if my memory is right. Though I can't promise that! In those days the 'cricket' end was open, and there was no proper fence at that end, so you could watch the cricket. It must have been the tailend of the season, as us Hamlet fans were 'bored' of the football, and spent the second half barracking the local cricketers every time a wicket fell, much to their annoyance, & waving of bats angrily about head, in our direction, on the football ground above! I also remember spending half time collecting lots of conkers for school, from the many horsechestnut trees, by the driveway, up to the ground. well I was only eleven at the time, and still at primary school!

I also saw a couple of games in their FA Cup run to the Third Round Proper in the 1979/80 season. Around that time, for a number of years when at school, I was fascinated by non-league sides staging big FA Cup games, albeit from an extremely envious point of view, as I had to wait until 1998 for Dulwich Hamlet to reach the First Round Proper, losing at home to Southport, at that stage for the first, and thus far, only time in my life.

I was at 'The Meadow' on a midweek night, following a postponement due to waterlogging, to see them draw 1-1 at home to Merthyr Tydfil, having come from behind, in front of their biggest crowd for many years-3,052. Merthyr brought several coachloads, which parked over the road from the ground, and I stood in awe, as fighting broke out between the locals and visitors, with one Welsh fan actually being thrown in the small river that flowed alongside!

Chesham United won the replay 3-1, & had been drawn at home to Cambridge United. Cup fever struck the town big time, & the match was an all-ticket record crowd of 5,000 sell out. Including myself, who had to travel up there not once, but twice, on the Metropolitan Line. First, to get the ticket, when they went on sale, a couple of sundays before the game. With old terracing being 'dug out' of the owergrown grass banking to the right of the wooden stand. I even stayed, borrowing a shovel to help, for an hour or so. Then the game itself, which the visitors won 2-0. I to seem to remember a number of shops in the High Street having 'Chesham United Cup Run' displays.

The wooden stand I mentioned burnt down in 1983. Before I go on I must confess my memory is not that good. I have lifted the above information from 'The History of Chesham United' by Peter Gibbins,(published1998) which I bought from their Club Shop, which was shut for a previous Reserve Team visit, but was 'open' as one of their Club Shop staff was there that night doing a bit of tidying up! Which was a piece of luck, as I ended up spending about twenty five quid in it!

This is what the book said about the fire:

"The fire destroyed 63 years of Meadow memories. The 1982-83 season was placed in turmoil when on the evening of 3 May 1983 the main stand was set alight by an electrical fault. The Club's semi final with Hemel Hempstead in the St. Mary's Cup had just finished, Hemel winning 4-3. As supporters looked on, the blaze took hold and within five minutes the old stand was totally destoyed."

The current one is in the same place in the ground, and is roughly the same size, I think.

This is the way up to the ground, from the main road.
These photos were taken on Wednesday 5th September 2007, prior to a Capital League
West Division match, which Dulwich Hamlet won by the odd goal in three.
The FA Cup game listed on the board, played on 15th September, was an FA Cup First Qualifying Round tie, against Hellenic League Division One East side Henley Town, with Chesham United comfortably winning 5-1, in front of a crowd of 273.

Chesham United currently compete in the Southern League, but I have fond memories of my visits there, especially in the mid nineties, when we had a number of Supporters' football matches with them, including our, still record victory, one year, when we beat them 12-1. 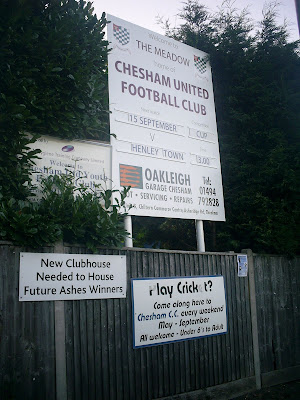 This is the corner of the ground where the main turnstiles are,
you can see the clubhouse on the right, with the stand just past it. 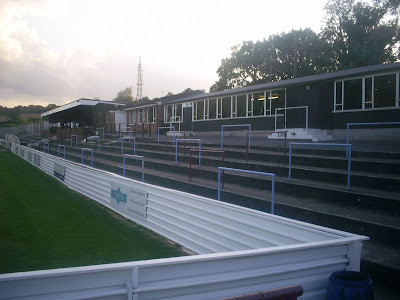 This is behind the goal, at the 'cricket' end. The Club Shop is the
white building on the left. 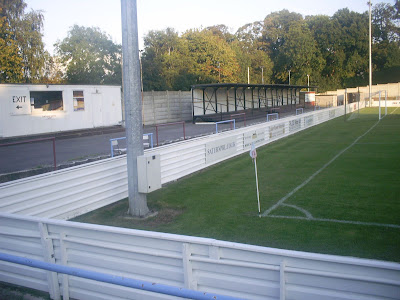 This is the far side, a decent covered terrace, with a tea bar, &
I think, a toilet block, on the left. 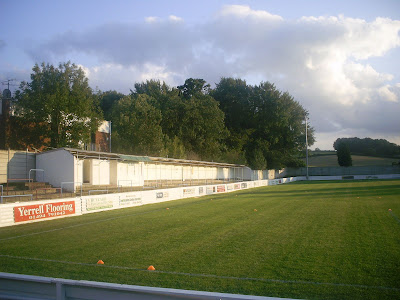 This is a shot of the covered terrace along the side, from
towards the other end. 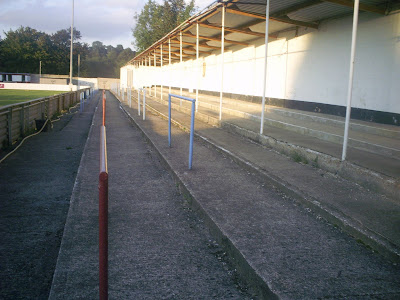 This is the far end, behind the goal, I presume the turnstiles
at the end aren't used very often, and are just there for
'ground grading' purposes. 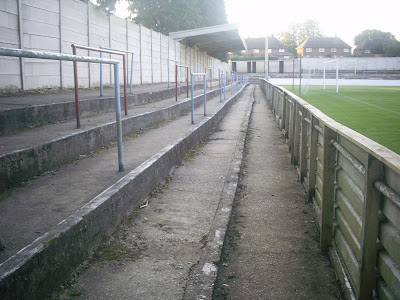 And here is a view of the stand, and the clubhouse, along
the side, from behind this goal. 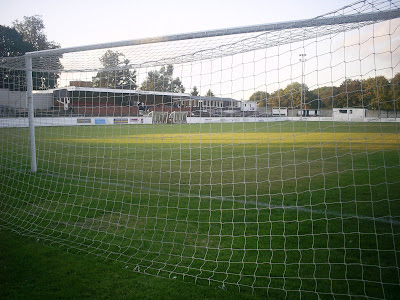 This is the terrace along the side, that leads back up to
the stand, and thus completes our tour of Chesham United.
Looking back through these I have no idea why I didn't
take a decent snap of the stand. 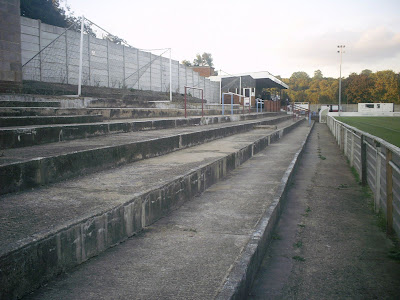 Couldn't resist snapping their Club crest, on a wall either. 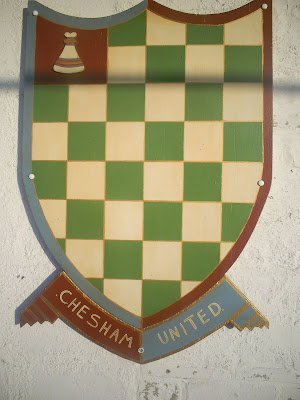