I visited this ground on a Sunday morning, in September 2007. I've been over to Calais many times, but never to watch football.
It's such a easy place to go for a 'foreign day out' with your mates,or on your own. It's not the greatest town in the world to go to, to say the least, but I find it pleasant enough to go to every couple of years.
When I mentioned that I fancied going over the Channel after the Hamlet were at Dover Athletic, one of my mates suggested I see if there was a match at the Stade du Souvenir, as he'd walked round it on a previous visit. A decent enough ground, but what made it was the setting. It is within the walls of the old town fortress, the Citadel! It is only about five minutes walk from the town centre, on the Rue de Pierre de Coubertin.
My mind was made up when a 'hopper called Chris suggested I check for a match there too.
It was the weekend of an early round of the French FA Cup. but no game
in that competition here. Now, for me, I wasn't concerned about the standard of the match I was going to see, I was more interested in visiting the stadium. And so I was happy enough to find a fixture on the internet with a 10.30am kick off. It was a reserve side at home to a first team, of which cup, or leagues they're from, I wasn't entirely ure.
Thankfully I was able to find out thanks to the amazing knowledge of some of the regular posters on the Tony Kempster site.
It was Calais SO II versus Bremes RC; with the SO standing for Stade Olympique. It was a cup match,Round One of Coupe radio 6 Calais Boulogne, which I'd guess is their equivalent of the local county cup.
The match finished 1-1, and went straight to penalties, with the 'home' side Calais SO reserves being victorious in the shoot out 4-3.
One contributor posted that he thought that this wasn't a regular home venue for a particular club, and that, if you are lucky, can get a local team using it for an early French FA Cup match; which would appeal to more discerning 'hoppers than myself! ;-)
But having said that I've just found this list of French non-league grounds in the region, & it lists this ground as the SO Calais home ground.

It wasn't a high standard, to say the least! someone else on the Tony Kempster forum worked out that the Reserve side played at the fifteenth level of the French pyramid! As I've said the game idn't mean much to me, I was there to visit the ground, and I doubt I'll see many games in much more unusual venues than this.

This is the superb main stand.
With a 'crowd' that size, and this was a reserve team home
match don't forget, there was unsurprisngly, no gate taken,
and no programme! 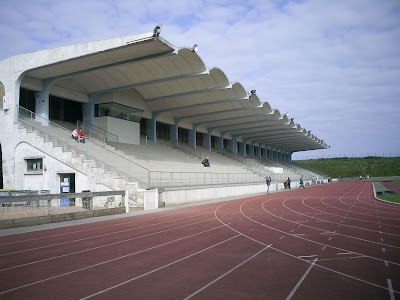 One of the entrances into the Citadel. 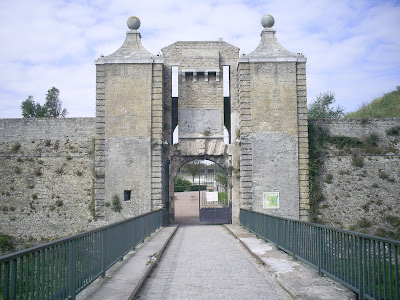 This was the view I got from the approach that I entered. 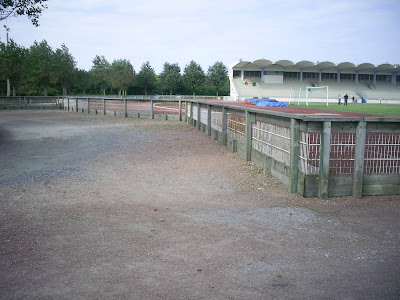 I walked round to the stand, & here is a view from it, taken
from the far end. 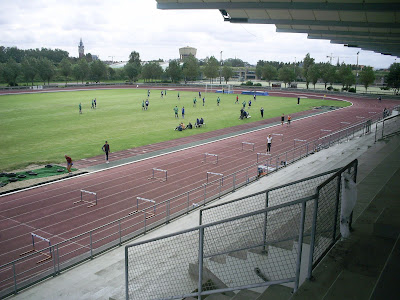 There was a fair bit of graffiti on the pillars, I took
quite a few snaps of the scrawl. 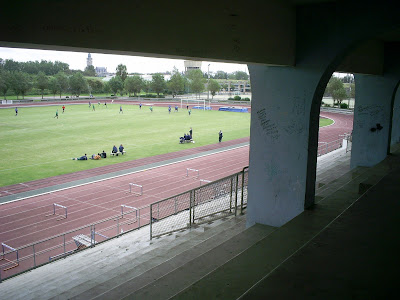 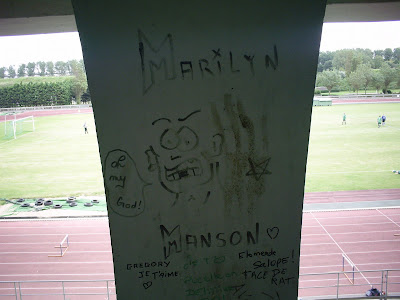 "Honest guv, it weren't me!" As far as I was aware the 'DH'
didn't stand for my Dulwich Hamlet! 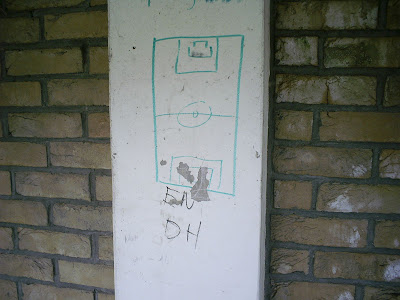 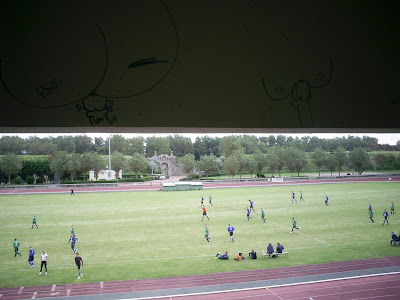 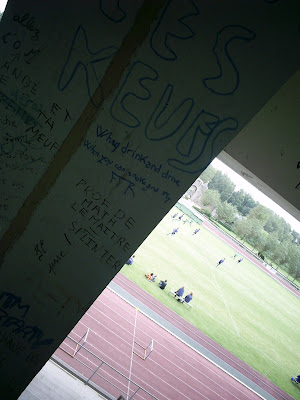 Another view looking down to the pitch. 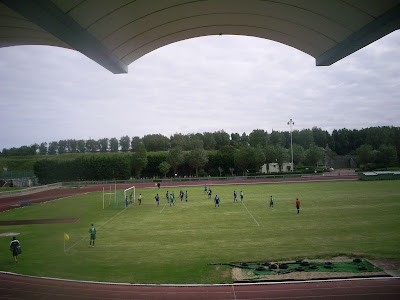 This is the back of the stand. On the grass behind the far goal. 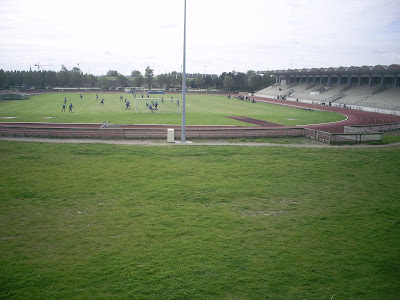 And this is the path behind the same goal, you can just see
the end of the stand in the left of my snap. 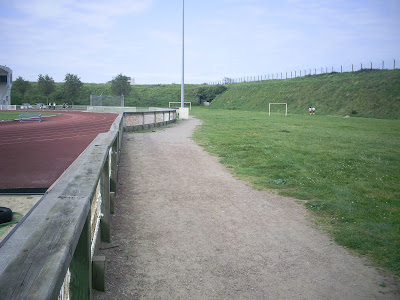 Another view of the stand, from the corner. 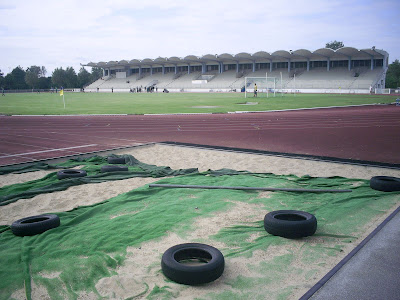 Behind that corner are tennis courts, which gives a feel of
the previous use of the place, as a fortress! 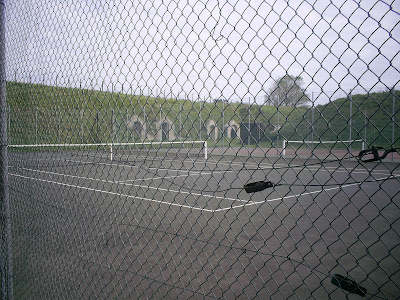 The courts even had their own terracing! 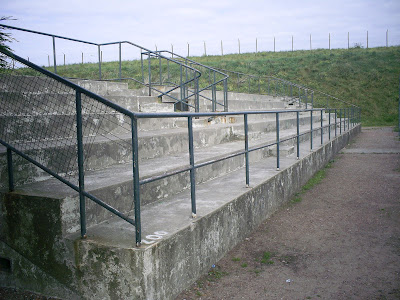 Set back from the halfway line, opposite the stands, was
this closed ticket booth. 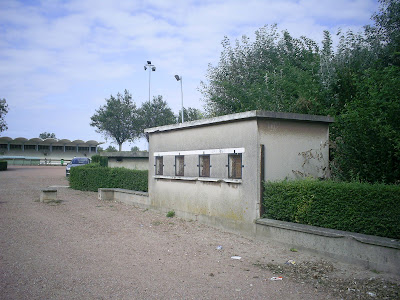 And this is the view down the far side, from where I entered
the stadium. 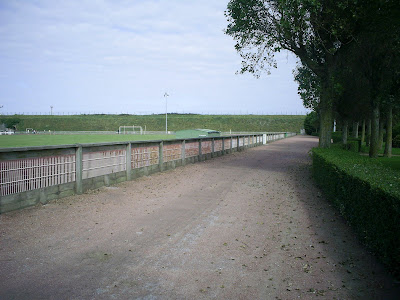 I was at this ground on Sunday afternoon, having stumbled upon it while visiting the Citadel. A match was actually taking place between a side in green and a team clad in blue and white stripes. There were around 100 fans in the main stand, and I would have stayed to watch the whole game, but my wife and children were nagging me for their dinner.
It was stumbling across the Stade de Souvenir that led to me finding your excellent site. I am currently trawling through all the other small stadiums I have been too. Top work, Rabbler.