The Stade de France was built for the 1998 World Cup Finals, and this was third visit there. But my first 'tick' of the ground, as my previous two visits were only on Stadium Tours. On the first tour it was the day after France had beaten England in a rugby union international. (A sport that bores me to tears, I'm a rugby league fan!) The woman conducting the tour mentioned the French victory over england, & despite not caring about union, at the time England were still world champions in the union code. So I couldn't resist raising my hand, and asking her where the word cup trophy was on display!
I returned on a later visit to Paris, as it was on a Dulwich Hamlet Supporters' Team tour, and a number of our lads wanted to do the tour, so I went along again.

As you can see below, these aren't the clearest of photos, being a night game, but I will make of point of going on the tour yet again, when I go over to Paris sometime next season.

These snaps were taken on Saturday 29th March 2008, and were from the Finale Coupe de la Ligue, which was the French League Cup Final, between Paris Saint Germain & Lens. I am fortunate to be good friends with Nicolas Lucas, of the PSG Belgium Supporters' Club, and he arranged a ticket for me, which was only €25. There was no programme though. The game was a sell-out, and kicked off at 21.00; which suited me fine, as my favourite French side Red Star were at home at 18.00 & they were only a few stops away on the Metro!

I dashed to the Stade de France, & this is the posting I put on the Tony Kempster forum:

"This was a sell out, and it was for the French League Cup Final between PSG & Lens, who are 3rd & 4th bottom in Ligue One, with three down! So the winners could get relegated, but play in the UEFA Cup next season! It was easy to get to, just two stops up the line from Red Star, & I was lucky to get a ticket through my good friend Nicolas, from the PSG Belgian Supporters’ Club, & it only cost 25 euros. I was there outside twenty minutes before kick off. So far so good. My gate Y was on the far side & when I got there a few hundred were still queuing. I wasn’t concerned though, I expected to get in before kick off. But then a line of police came over, right by my side of the queue, typical, and the gates were being swung shut, for no apparent reason. People started shouting in protest, and waving tickets in the air, as there was no explanation at all as to what was going on. Some started shouting abuse at the Old Bill, and a few plastic cups of beer were chucked towards them. I wasn’t scared, or anything like that. Back home I’d be having a go at the law myself, but I just wanted to get inside, & the police were rather twitchy. They started pushing & shoving, batons came out, and horses came charging over. Luckily there was signage above the now closed gates, that entry could also be gained from Gate Z further along. Presumably left over from the England game a few days previous. I dashed over to there, as did some others with the same idea. But then they started closing those gates as well. They swung inwards from our side, so people were grabbing them trying to rush in. I managed to get some weight behind my shoulder, & squeeze in through the smaller one on the far right just before it was shut, leaving more outside, being baton charged & teargassed! For what? I was none the wiser. Just a severe over reaction by the police who hate PSG, who have a notorious hooligan reputation, which is a justified one. They do have a real nasty element, bizarrely split also on racial lines, and they fight each other at games! Anyway I just managed to get in, so panic over, they don’t even check my ticket in the end! The copper who checks my bag inside & frisks me actually looks rather scared as I look at him, there is fear in his face. Personally I have no sympathy if the French plod get a slap or two, if that’s how they act!
My section is behind the goal, the middle tier, and I’m towards the back of the area. I have no idea what seat number my ticket said, Nicolas said people would stand anywhere. There appeared to be more Lens fans in the stadium than PSG, probably a 40/60 split. The game was also one of two halves. PSG went in one up at the break, but were comfortably on top, but after the turnaround it was mostly Lens. They equalised early on & kept up the pressure, with far fewer chances for PSG. The clock ticked on & it was heading for extra time, & possibly penalties, but I simply couldn’t see us holding out for another half hour. But then, way into stoppage time, the 93rd minute, we got a penalty! Our end went crazy, but I didn’t, as we hadn’t scored it! It would be so ‘Dulwich Hamlet’ to still throw it away now. Now this was pressure, with the kick up at their end. But we slotted it away, and moments later the final whistle went! Pandemonium! And I had now seen PSG win at the fourth time of asking! (No victories away to Auxerre, & home to Socheaux last season, & this pre-season at Arsenal) It was all over too quickly, but I was lucky and honoured to be there, thanking Nicolas for getting a ticket for me, before he headed off for the long drive back to Belgium, along with about fifty others who had driven in a convey from the neighbouring country. "

A dark snap of the exterior 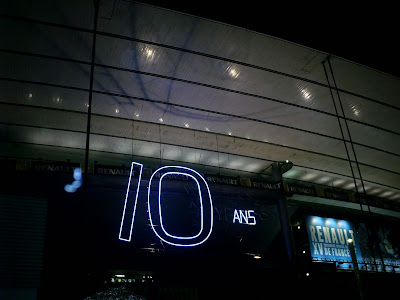 The pre-match 'entertainment'...call me old fashioned but..
just get on with the game! 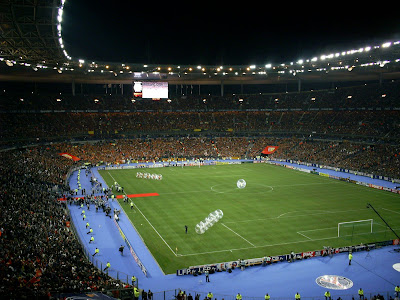 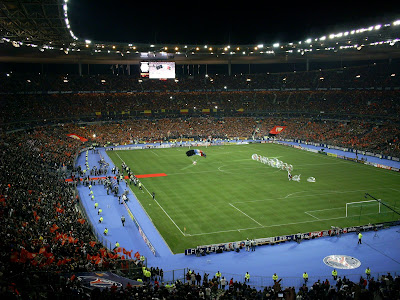 I was in the middle tier of the PSG end, this is to my right 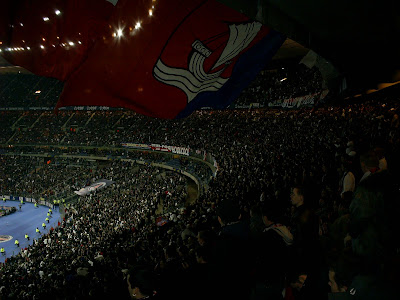 And to my left 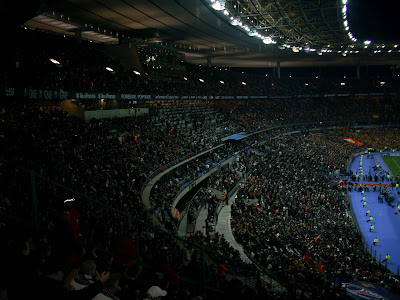 One of their 'fan groups: 'Kop of Boulogne' 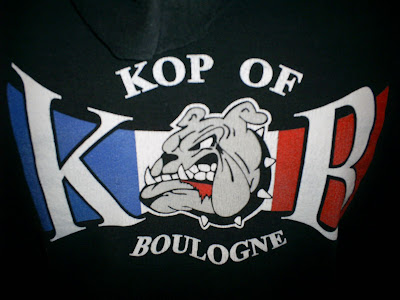 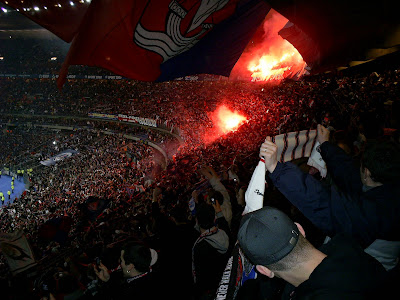 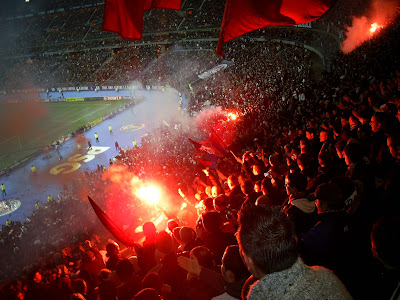 Look at the away end...
we can see you sneaking out! 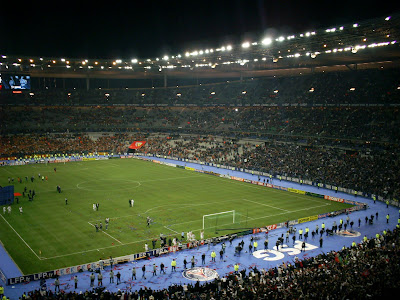 We shall not be moved! 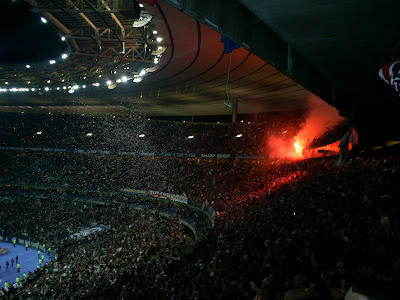 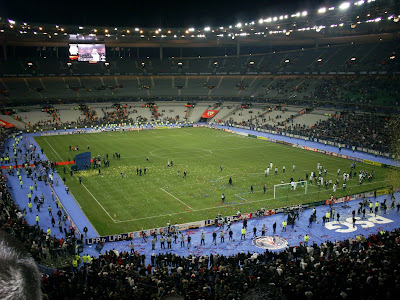 My mate Nicolas, who arranged the match ticket for me!
Merci mon ami! 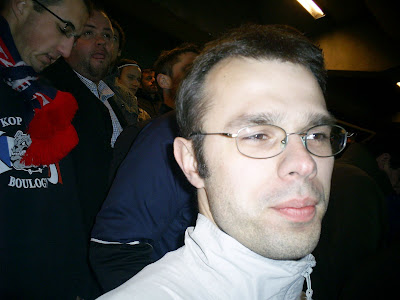