I visited JA Drancy at the start of the 2006/07 season...almost! I had been in Paris to watch Red Star, and on the Sunday they had a friendly with a Red Star XI, I had seen a CFA league match the day before. So I went to Drancy, and found the ground locked up at kick off. it had been pouring down with rain, so I assumed it had been postponed. I was pissed off to find out later, via the excellent Red Star website, that the match had been played, but they'd brought forward the scheduled kick off! this had been mentioned on the French pages of the site, which I don't look at as I don't understand them, but not on the English one. Presumably because they thought no Englishman would be foolish enough to go!

So when I was in Paris for the last weekend in March I was pleased to see that JA Drancy were at home. Again I thought it might be off, as it poured down with rain, what is about this town? ;-)

I posted about it on the Kempster site:

"And so to my last match of the weekend. This time in the north-east outer suburbs, in a place called Drancy. This was for a Championnat Division Honneur clash between JA Drancy & Lusitanos Saint-Maur. It had been raining all morning, & it was a 3.30pm kick off, so again, I thought it might have been off. But I was pleased to get to the ground ten minutes before the start & see people in the ground. This was the Stade Charles Sage, and easy to get to from Drancy station, not Metro, but overground on the local RER service, which you can catch from Gare du Nord. It was a mere ten minute stroll. Cross the bridge & turn first left, turn right into Rue Bernard, & carry on walking. As simple as that. It was a nil nil draw, played in driving rain, & windy, but no less of a spectacle because of the conditions. The home side were well on top, but just lacked in the final third, creating chance after chance, but not making use of them. According to some groundhoppers out there I shouldn’t count the match as there were no goals. Sod that! Each to your own, & it’s definitely a ‘tick’ for me! The ground is open on three sides, with a running track around it, but a strange one. It only has two lanes! Obviously some sort of practice track, but nothing I’ve seen before back home. So you actually weren’t too far from the action, if you stood on the far side. Enough flat standing for one abreast, with the concrete perimeter wall behind. But it wasn’t hard standing, just grass. In the middle third of the opposite side was an elevated stand, with a couple of steps of terracing in front. It was up here where the majority of the crowd took shelter. Though the vast majority sat, there were no actual seats, just steep concrete steps. I’m not sure what the gate was, & I didn’t do a proper headcount, but it looked about 300 or so. I sat at the back, near the centre & had a great view, though I was right by a portable speaker, which blasted out both music & announcements. At the front, to my left, was a small group of mid-teenagers, who sang throughout, about seven or eight of them, and they had lots of flags & even some flares! Their banners were more terrifying than them: ‘Ultras Kommando Terror Drancy’! There was also a black bloke with a bicycle type horn, who shouted ‘Allez Bleus!’ almost non stop, and had a scarf wrapped over his head, bandana style, with a one piece top to toe blue outfit, which he’s adorned with words of support in white, honouring his team! He looked about fifty, and another one you’d file under the ‘character’ section! I asked if I could take his photo, and he said only if I bought him a beer. How could I refuse? To the left of the stand was a wooden beer stall, and a plastic tarpaulin covered BBQ stand, doing sausages. On admission there were a couple of home officials, but they weren’t taking any money, so I assume admission was free, & they handed out a double sided A4 sheet, for a programme. Which incidentally had the full club name on it. JA Drancy stands for Jean d’Arc de Drancy. I have no idea of the significance of that. I’ve only heard of the Joan of Arc woman, presumably Jean id French for Joan! The only other thing of note was a concrete wall just inside the entrance, which had a frieze of three athletes running on it. "

These were dotted around town, there were similar
ones for the local rugby team. 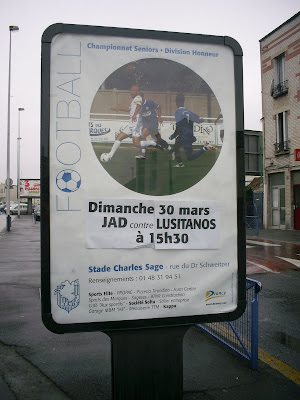 No turnstiles as such, you just pushed open the white
gate on the right. 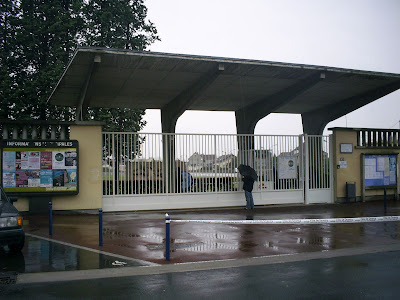 This was just inside the entrance. 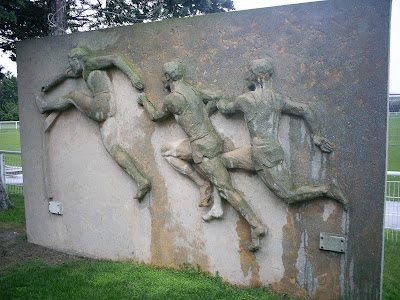 From the main gate I caught a flare being let off, at a
non-league game! 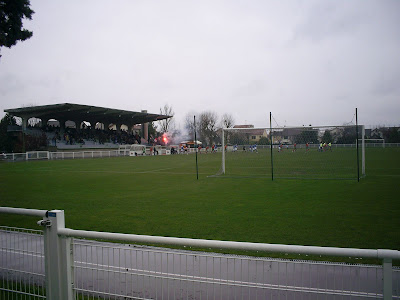 Despite the rain I took a stroll round the pitch, anti-clockwise.
In the corner was a basic electronic scoreboard. 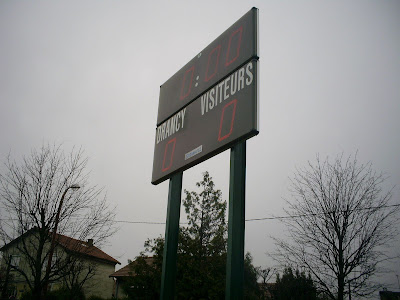 This is the far side, that is opposite the stand, a few
hardy souls braved the rain there. Note the unusual two lane
track. 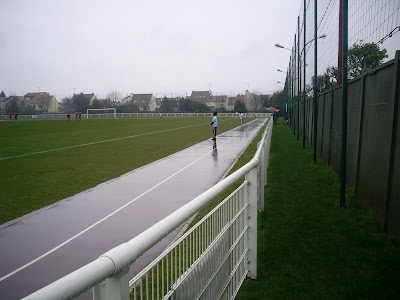 From the halfway line, the stand at kick off. 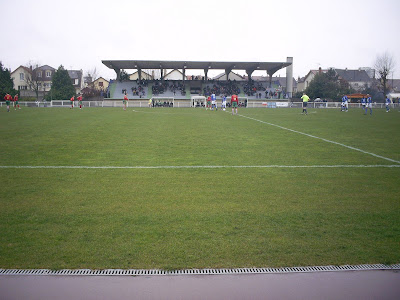 A banner on the halfwayline, opposite the stand. 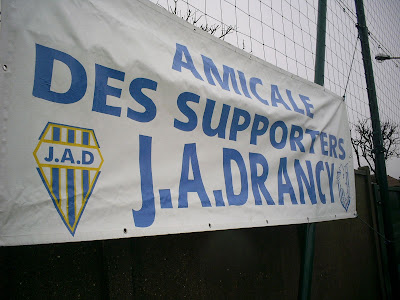 A view of the stand, from behind the far goal. 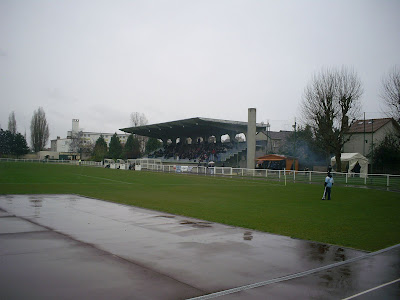 This was the food stall along the side. 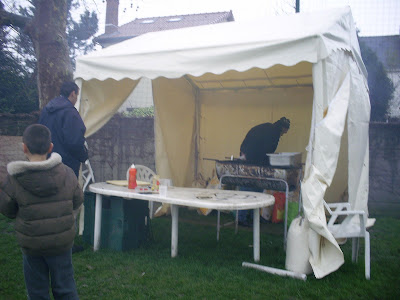 And the beer stand. Sitting at the back of the stand. 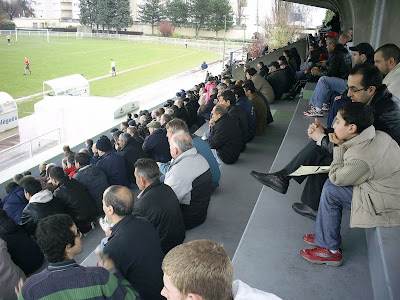 Trust me, the soundsystem was LOUD!
I didn'tt stay here for long!
Not sure if this bloke was a local reporter, or a
French groundhopper with his notebook! 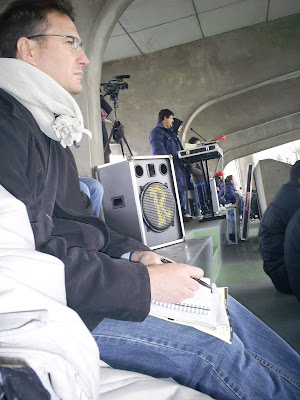 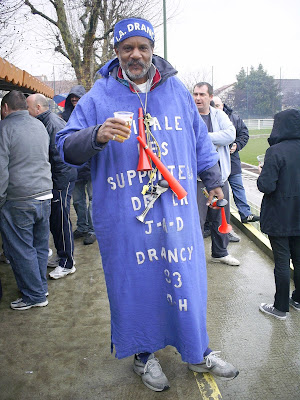 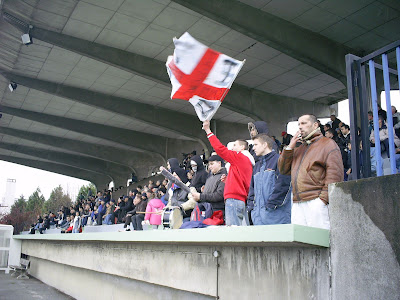 Though, to be honest, I didn't find them too
intimidating! ;-) 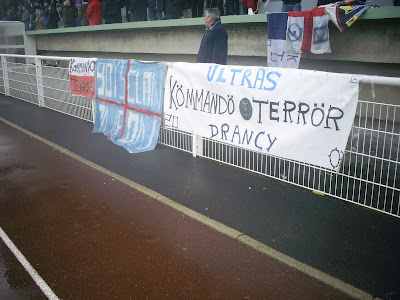