My first visit to 'The Crabble' , home of Dover Athletic, was tinged with sadness & tears.

I am a lifelong Dulwich Hamlet supporter, but in the mid eighties a complete shyster called David Milsted (NOT to be confused with his old man, who was a gentleman, & was Chairman of Croydon FC) & he was attempting to asset-strip the Club. He banned me for publicly speaking out against him, and he banned me! Now I was barely an adult at the time, and was a bit easier to be intimidated, and I vowed not to go back until he went. As it happened it was only about eighteen months later, when the Club Committee finally had the balls to stand up to him. So instead of fronting him out I walked away, and for the 1986/87 season I followed the fortunes of Carshalton Athletic, because the previous Dulwich Hamlet manager, Billy Smith, who was forced out by Milsted, went there with a number of Hamlet players, and his backroom staff.

Anyway that '86/7 season Carshalton Athletic were drawn away to Dover Athletic in the FA Cup, and it was a draw. One of the backroom staff, Billy's right hand man Len Hamlin, who was like a friend to me, not just a staff member of club(s) I supported, was suited and booted that day, & took a bit of a ribbing. Turns out he was driving off at the final whistle, as he had to get back to London for a wedding reception at Guy's Hospital, near London Bridge.

He never made it. Not far out of Dover our coaches were delayed by a tailback of traffic. There'd been some sort of accident. It was Len. He'd had a heart attack at the wheel, and one of the players in the car with his family, had saved the rest of them by grabbing the handbrake. But, by the time we got back to Colston Avenue, news came through that Len had died.

So I'll always associate Dover with him.

I've been there a few times since, all with the Hamlet. a few years ago, with the Youth Team, when we got stuffed in the John Ullmann Cup Final (a Kent Youth League competition) & twice with the First Team, in the Ryman One South.

These were taken at the match with them last season. I really like this ground, and if ever they got their finances sorted, and learned to live within their means, they could quite easily be a decent Conference National side, where they've been before; if not a Football League side. 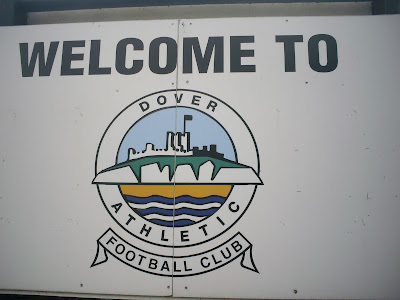 You go up a steep slope to get to the ground from the road,
and fair play to them, they have a car to drive elderly & infirm
fans to the top free of charge, if needed. It's only a couple of hundred
yards, but steep if you're a bit dodgy on your pins.

To the left, as you walk up, below the ground, is a former
cricket ground, which appears to host rugby union nowadays.
This is the sight of a former ground of theirs,
from Kent League days, & is mentioned in
"The Non-League Grounds of Kent" by Mike Floate,
of which I got this info from the second edition, published
in 1998. 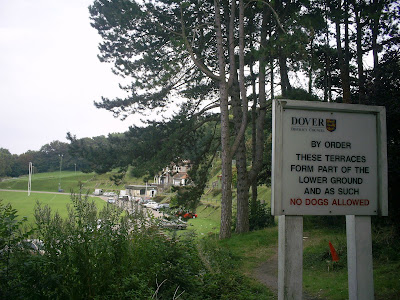 Presumably that grass banking is part of the old
terracing, but I'm guessing that. Not the cars at the top,
which shows how high up the current ground is. 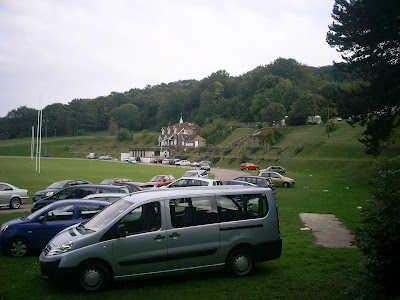 The turnstiles, I was a little early. We'd played their
Supporters' Team in the morning at a local school pitch. 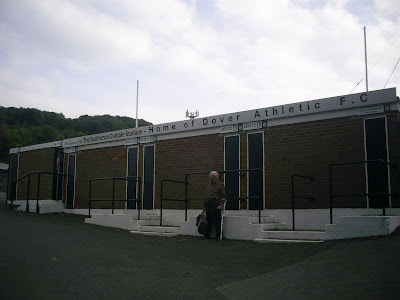 This ground must be almost unique, as the turnstiles are
way below pitch level, as you can see here.
The white buildings at the end ate the tea bar & club shop.
With their clubhouse beyond. 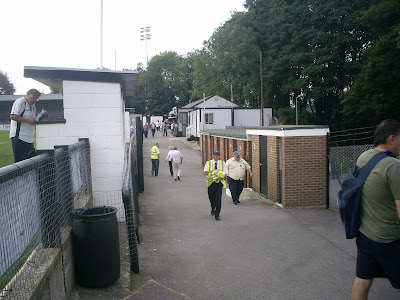 This is the terrace behind the goal at that end. And they are
our little band of fans that day. We took around thirty fans
that day, which, to be honest, wasn't much of a turn out. 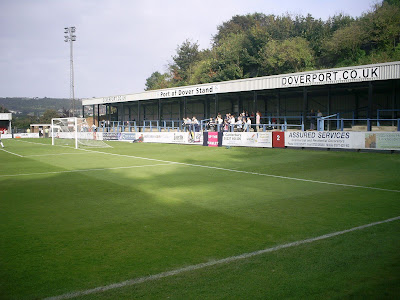 Another snap of the same end. 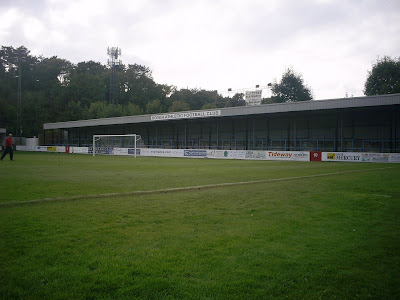 Along the full length of the far side is seating. In the middle
is a televison gantry, and annoucers box. The Dover website
do excellent highlights of all their matches. And while partisan,
which you would expect, is generally fair. 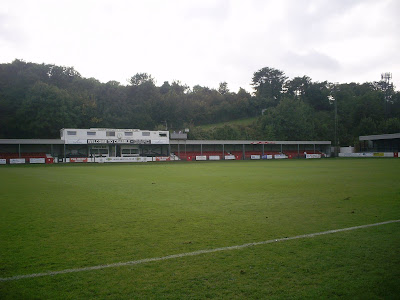 Here is a view of the seats from the other end. 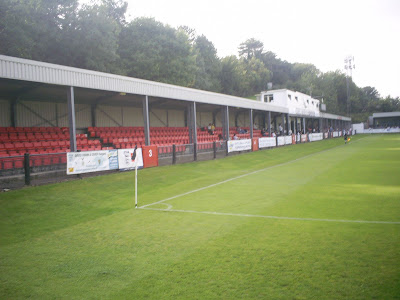 Which is also covered, & almost identical to the
terrace at the other end. 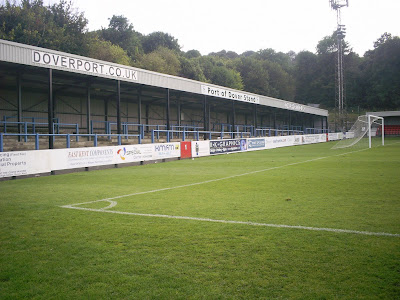 This is taken from the corner of the main seats. Opposite,
to the left of the turnstiles as you walk in, is another stand,
which is a family one, I think. It's a bit strange on it's own there.
The corner, by the pylon in this photo, is where the changing rooms
are, and where the players run out from. 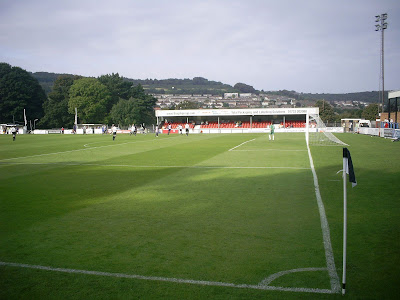 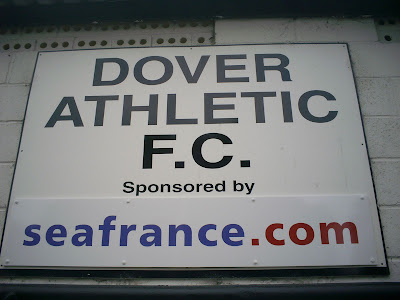 And at the bottom of the slope, near the entrance, is
'The Cricketers', where we stayed afterwards, mixing with some
very friendly locals, to watch the England v. Israel match on the box. 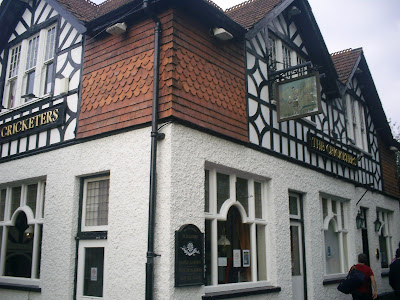