My first visit to Park View Road was back in August 1980, for a Dulwich Hamlet pre-season friendly, when they were members of the now defunct Athenian League. This is the home of Welling United. And also Erith and Belvedere. But what makes this stange is that the Deres are not tenants, but equal parners, having moved here, after a fire at their old stadium, which they subssquently sold. But even though it is a partnership I will always, probably unfairly, see this ground as the home of Welling United, with Erith & Belvedere 'only' sharing it. And I suspect I'm not the only one who perpetuates this myth.
The ground was previously home to both Bexley United, and before that, Bexleyheath & Welling. Two old Southern League clubs, if I'm correct. The ground didn't change much at all, until Erith & Belvedere moved in, building their own clubhouse & stand opposite the old Welling stand. There is a local car showroom across the road, and for many years the francise went by the name San Siro. And this company had this across the roof of the old stand. I'm not sure when this advertising went, but the showroom is there, but under another name. for many years locals, & opposition fans, referred to Park View Road as the San Siro, in an ironic reference to the home of both Inter & AC Milan.
I visited here for these snaps close season, 29th May 2007, and the gates were open, so I walked in. I couldn't access the entire ground, well I could have done, but couldn't be bothered to climb over some easy fencing. On the way out an old boy came out of the closed club offices, I hadn't realised anyone was inside. "Can I help you?", he abruptly barked. "Sorry mate, just taking a few photos, I didn't realise anyone was around, I jsut walked in. Just being a bit sad as I've just got a digital camera". Which disarmed him a bit. I'm not sure if he expected me to be a bit bolshie or not! "Well you should have asked, It's private property. I don't want photos ending up on the internet and places like that."
Fair enough, mate, but tough luck, I've already taken them! What a miserable sod! Has it occured to him that by seeing snaps of his 'private' ground, which as far as I'm concerned is 'public' as he's left all the doors open, people might want to visit it. Because it is a bit of a ramshackle delight. I never thought of it at the time, but i wish I'd thought of saying I'd just moved into the area, and someone told me there was a decent football club down the road. I bet he'd had brightened up then as he sniffed some season ticket money!
But thanks to his miserable attitude you won't catch me here for a Welling United match. First impressions count, and all that. Good customer care costs nothing; but bad customer care costs!

I've lost count of the amount of times I've been here over the years, certainly into double figures. Too many to remember. but I have been here for packed FA Cup ties versus Reading & Gillingham, as well as Dulwich Hamlet Youth Team matches. Funnily enough though, I've not seen Erith & Belvedere play here yet.

This is the entrance from the main road. 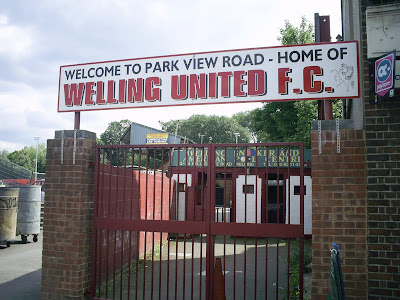 This is up on the wall of the building immediately to the right
inside the gates above. 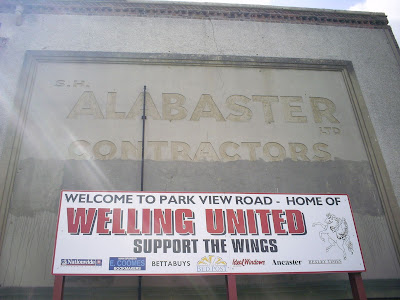 Just inside the turnstiles, and ahead is their bar & offices.
This is where 'Mr. Happy' came marching out from! 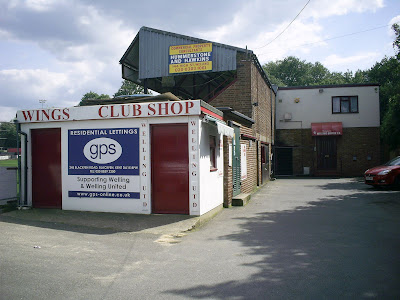 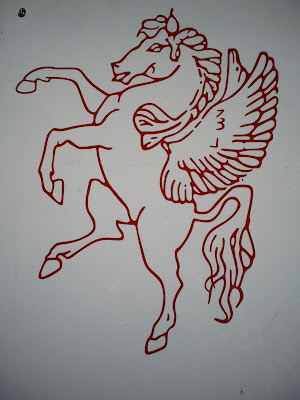 If you walk along the main road, behind the goal so to speak,
these gates are open. Which, I assume, is the Erith &
Belvedere entrance. 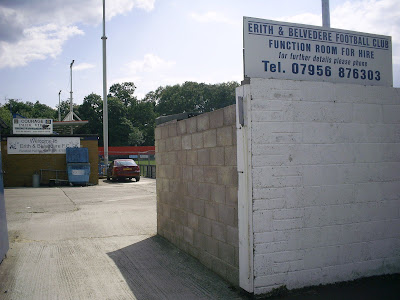 These must be their own turnstiles, taken from just inside
the ground. 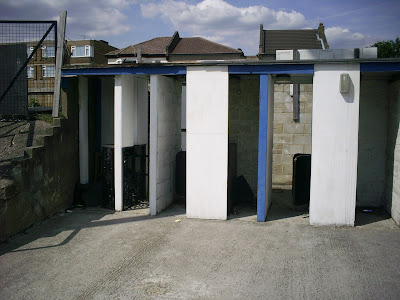 This is the Deres clubhouse, with their modern stand in
the distance. these fences blocked me walking along to it, I
couldn'r be bothered, plus a groundsman was working on the far
side of the pitch, and i didn't want to disturb him. 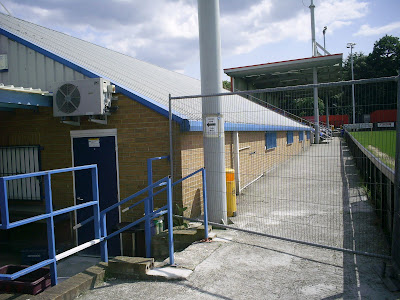 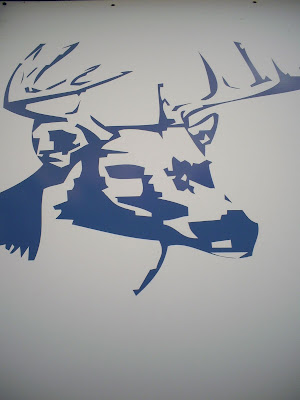 This is the open terrace, behind the goal at the main road end. 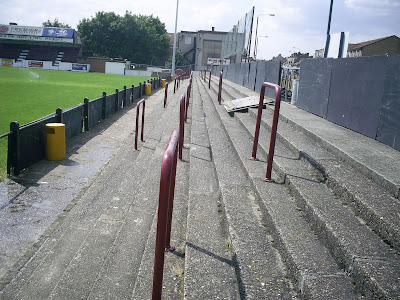 From the Erith turnstile corner looking towards the Welling
United stand. 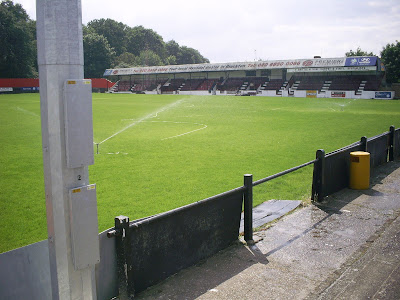 Walking back out of the ground, as the terrace was also
'fenced' off, I went back in through the Welling entrance. And
from here you get a good view of the Erith stand. 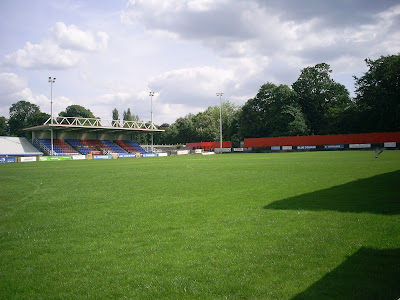 Walking behind the Welling stand you come out at the fae end,
and this bit of old terrace takes you to the corner of
the far end. 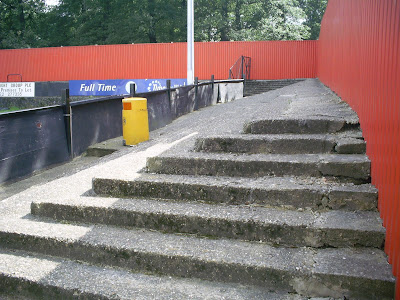 And this is the open terrace at this end. This photo doesn't
really show how far above the pitch you are at this end... 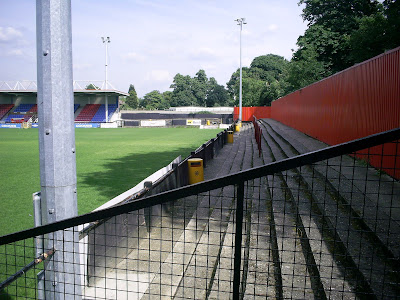 But this one indicates how high up you actually are. 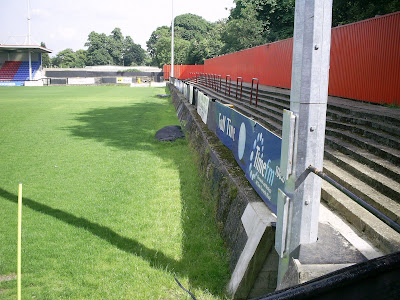 Retracing my steps I take a photo of the Welling stand, before
scooting round the back of it again, and this ends your 'tour'
of Park View Road. 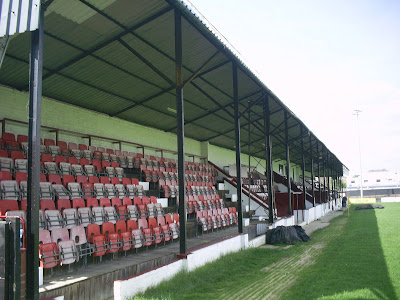 I went there a few years back for their FA Trophy game against Grays, which was a 2pm Kick Off on a Sunday owing to the fact that their floodlights has been blown down in a recent gale.

I had also been there long before that, when my team Wycombe drew 2-2 there in January 1993, though dense fog meant I didn't see much of the 2nd half.

I enjoyed my second visit, they were friendly and it was a good game. Also a nice Cafe across the road.

The worst welcome I have had was at Bedfont, where I went on a non matchday just to take a few photos. I was met by a miserable and rude club official who insisted on seeing my pictures I had taken (there were only a few of them of the signs outside). He also said he was taking down my car registration and reporting me to the police. His language was very colourful considering he had 2 young children sitting in the back of his car.

But for every bad one, there are lots of good ones who are more than willing to show you around and are genuinely pleased, even if on a non matchday. Pick of the bunch was at Southern League club Woodford United (visited en route to Notts County) where the chairman gave me a tour of the ground and a free pennant, pin badge and programmes and refused to take my money. Top stuff for a club that on occasions strugles to get 3 figure attendances. Hopefully I can repay their kindness and go there for a game one day

Couldn't agree more! it's nice to highlight the dickheads though, isn't it! ;-)
On one of my Prague trips I was taking photos on a non matchday at Spartak Kosire, & ended up talking, through someone else with him who spoke English acting as an interpreter, to their Club President!
If someone becomes known to me, as a fan, visiting Champion Hill for the first time, I always try to get them into the boardroom to look at the old photos after a game, if I can. Especially when it is visitors/friends from abroad. A little bit of goodwill goes a long way.
When I was at school I had a penfriend(Remember them?It's what we did before computers!)come down from Bolton. The groundsman let us look at the ground, but wouldn't allow us to walk round the old terracing. Not only was he a miserable git, it was very embarrassing for me, & something I've never forgotten.