Technically this is the second home of Hayes & Yeading United FC, following the amalgamation of the two clubs. Their Reserve Team play here,These photos were taken towards the end of the 2006/07 season, when I saw Dulwich Hamlet Reserves, in a Capital League match.

When we were in the same division at First Team level, a lot of Hamlet fans didn't like visiting here. The ground's ok, nothing special, but adequate. I think it's more because the location, a couple of miles from the station, and stuck in an industrial area; plus there is very little atmosphere here, due to their lack of support.

The ground is famous for being the one in 'Bend It Like Beckham'. And there will always be a link between Dulwich Hamlet & Yeading, as they were the last ever opponents for us at our old Champion Hill ground, back in May 1991.

I believe Hayes & Yeading United are planning to sell the old Hayes FC Church Road ground, where the new club play First Team matches, and they will move back here, after some redevelopment. For that reason I include 'The Warren', as seen here, as an 'old ground', even though it's still in use. I know most will not agree with me on that, but it's my blog! ;-)

This is the entrance. Note my shadow on the floor, which
proves what a rubbish photographer I am! ;-) 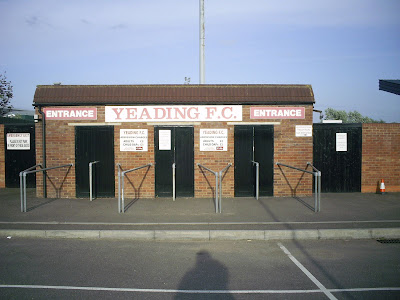 As you walk through the turnstiles you're near the corner,
and i'm going to walk round the ground clockwise. I do like
the 'beauty' of 'industrial ugliness' in the background, such as
that gas holder. 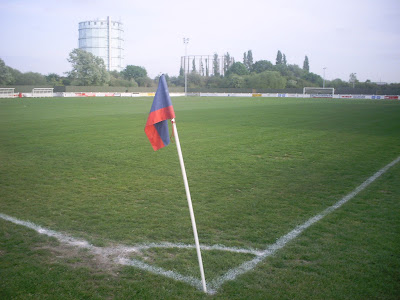 There is only cover at one end, I'm not sure when this was
erected, but it wasn't there for my earlier visits, whenever
that was! (early nineties?) 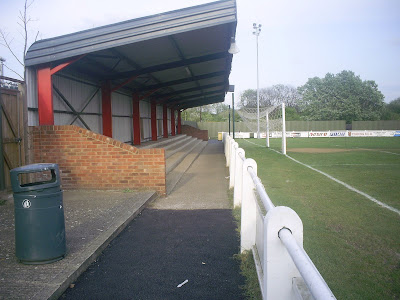 A view to the left from behind the goal. 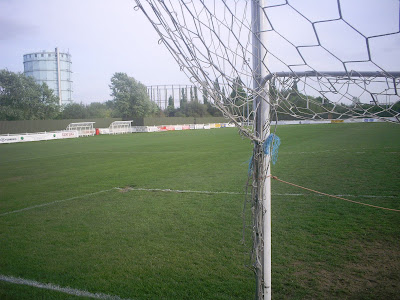 And to the right. The nets are tied upwards. The natural
assumption is that this is for the convenience of cutting the
grass. But in urban areas, all over London, this is also done
to stop foxes chewing on them at night! 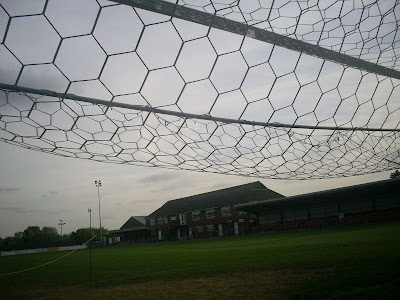 A better view of the main side, from behind the goal. The seats
to the right, and the changing rooms to the left of it, with
the clubhouse above them on the first floor. To the far left
you can see a small covered terrace, too. 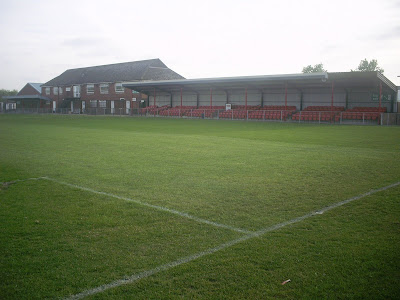 Just hard standing down the far side. The ground used to
go back further, until the new perimeter fencing. 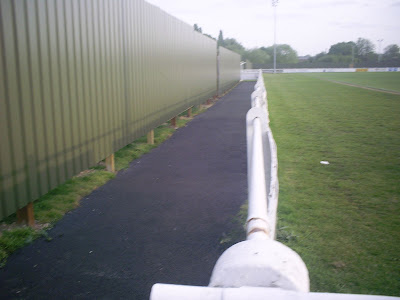 As you can see here, now 'no mans land' 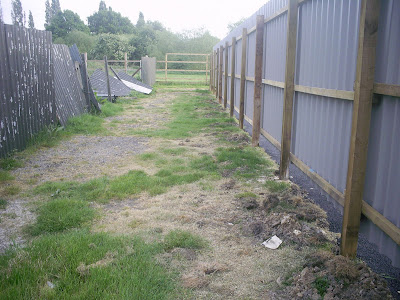 Before these new dugouts were put in, I think it was a straight
pitch fence all the way along. 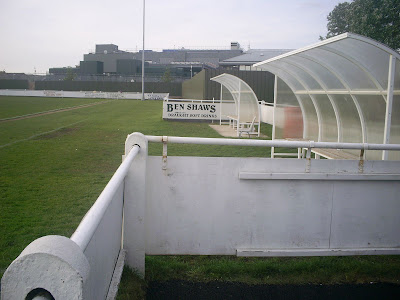 Just a path behind this goal, I would guess this end will be
built up when the merged club return here. 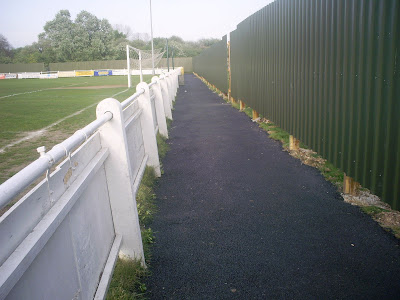 This is the covered terrace along the side. Note the staircase
up to the clubhouse. 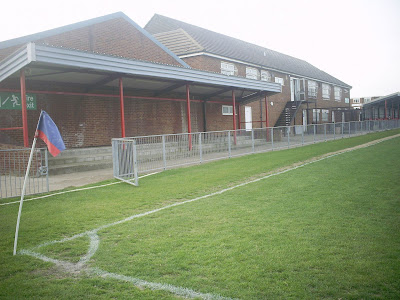 This photo is taken from the top of those steps. 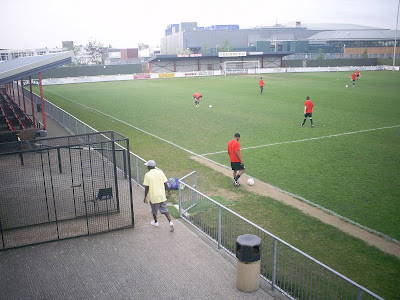 Back on the ground, looking back to the open end. 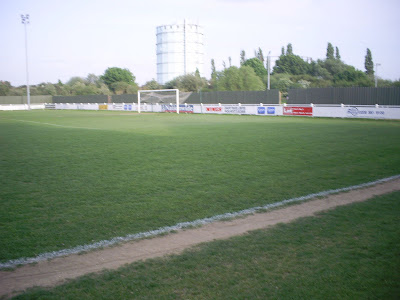 The seats, near to where we started. 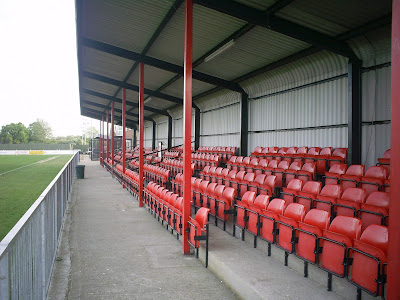 Before we finish, just one more look at the covered end. 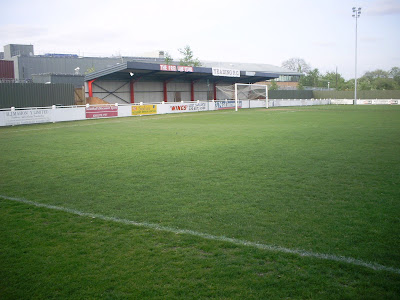 Great series but what a pity you haven't been able to do a review of the Hayes and Yeading Utd ground at Church Road!

I am planning to get back to Church Road before it goes. Been there plenty of times over the years, but not recently with my camera.

I remember coming here for a FA Trophy match and we got tonked 4-1 by Yeading who had DJ Campbell playing for them at that time.

Naff home support but i remember being quite impressed by the clubhouse and the friendly barmaid ;-)

'Before these new dugouts were put in, I think it was a straight
pitch fence all the way along' - You are right and you can see the old dug out in the Bend it Like Beckham movie. I was at the ground yesterday because I have seen the musical recently I wanted to see the ground which was used in the movie. The ground is currently being done up and looks almost nothing like the above photos. For one a large stadium is built. Also, the goal end where the terrace is has been moved in and there is just rubble where Jess scored her winner in the movie. That little stadium used in the movie and which you thankfully record here is gone. Good little ground and will be good when the team moves back there.