Before you say it...yes, yes I know Oakside is the home of Redbridge Football Club, and Barkingside are the tenants. But it is the ground of Barkingside Football Club; who had it taken over by Redbridge when they were Ford United & the tenant/landlord roles were reversed. As far as I am concerned this will always be Barkingside, just as Kingsmeadow will always be first & foremost home to Kingstonian, and not AFC Wimbledon!

I'm can't recall when I first visited here. It was midweek game in the nineties, and a Hamlet fan, Steve Child, was on the line. So I used that as an 'excuse' to visit. He is still in the middle, and now on the line for some Football League matches, & is still young enough to continue moving up the refereeing ladder. I wish him well.

I returned here for a Hamlet reserve match. The First Team weren't playing particularly well, and away to Basingstoke Town, not the most inspiring of places to visit year after year, being a crap town and a fair hike over untold roundabouts from the station. (Those were the days, I'd love to go to Basingstoke for a league match now!) The Reserves had a London Intermediate Cup tie away to Barkingside Reserves, so five of us went there instead. They never had a proper goalie and we still lost, while the First Team won! I was still drinking in those days, and we caned a couple of bottles of psirits behind the goal (a combination of whisky & gin, I think!) & we ended up BEHIND their bar that evening taking our photos with the London Senior Cup, of which they were holders!

These photos were taken in the recent close season, 2008, and I managed to eventually find a way in through a hole in the fence, & clambering through nettles & mud, of which I got covered in when I slipped at one stage!

The local signage leaves you in no doubt whose ground it is! The Underground station is adjacent, two minutes walk. 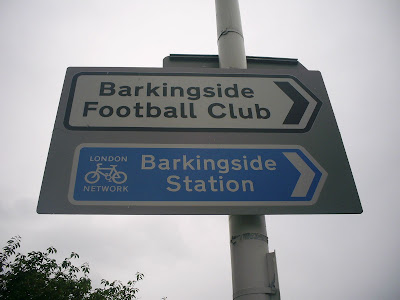 As you can see from this bridge, floodlight pylon to the left. 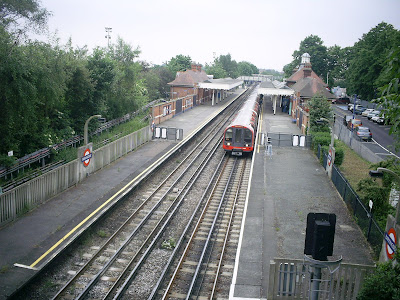 The entrance is through these gates, into the car park.
They were locked when I was passing through. 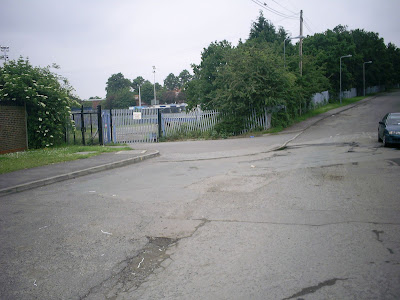 Here are the gates, from inside, my hand stuck through the bars fro this photo, with BS FC on them, a strange abbreviation for Barkingside Football Club. 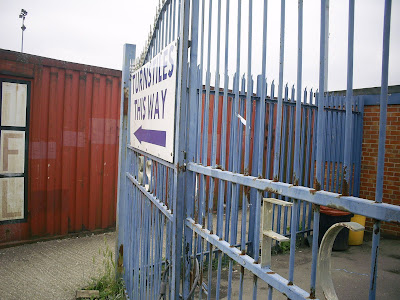 From the just inside the entrance, here is the clubhouse. 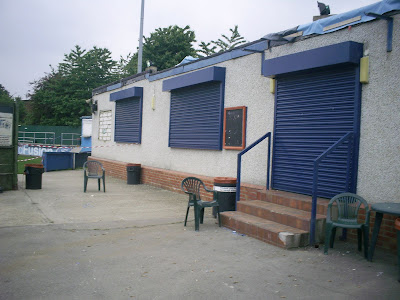 And tea bar, followed by a stretch of terrace, leading up to the stand. 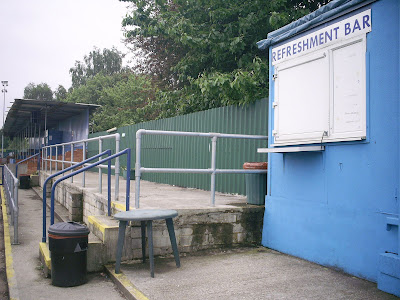 Here is the stand. Not the best as the seating is shallow, but providing an adequate view, and more than compiling with ground gradings, having previously been in Conference South. 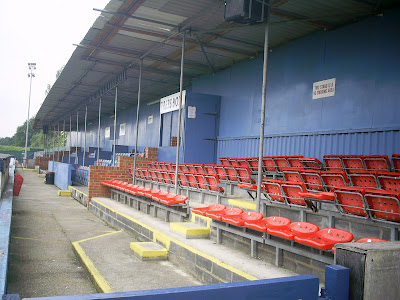 The 'posh seats' for the officials! 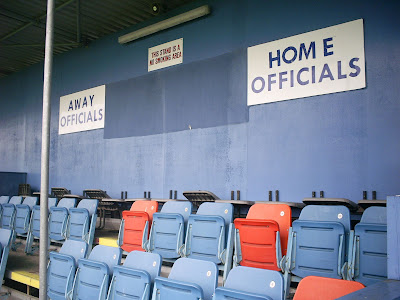 A full view, from on the pitch. 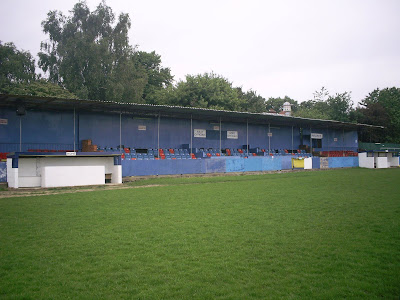 Going onto the pitch from here, we look to the car park end, andu can see the playing surface still had a lot of work to be done on it. 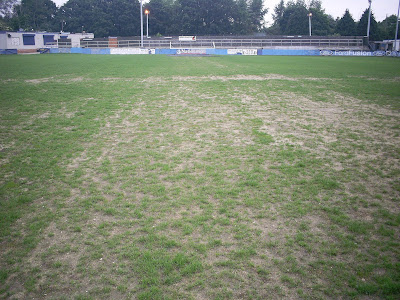 But back to the seating area, we look back down this side. 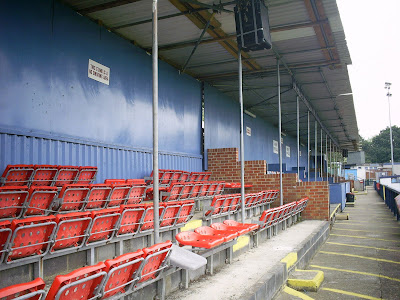 Here is the open end behind that goal. 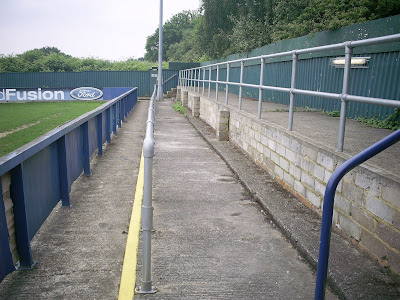 With another look down it, from the corner, giving us a glimpse of the covered terrace down the side. 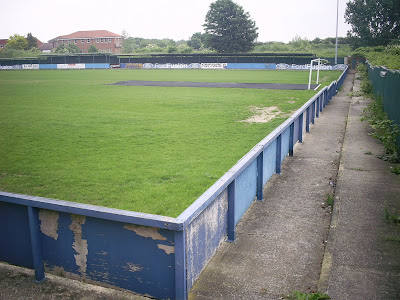 We look back across to the stand again, from the pitch surrounds you can see how difficult it is to maintain the ground. 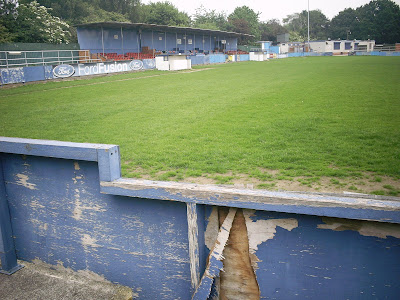 And a similar view, but through the goalposts. 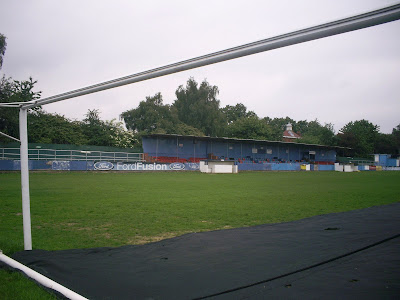 Towards the corner is this fence. Presumably you needed segregation in place to enter the Conference South? Note the open gate, up to the grass banking, which drops down behind, on the other side. That's how I evenutually found my way in, after half an hour of searching! 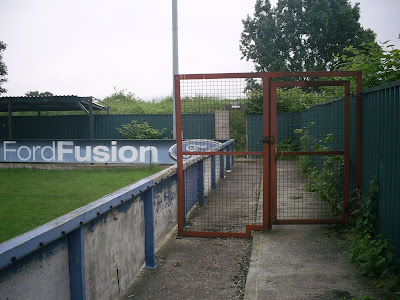 We head for the cover down the side, with old hoardings, presumably dating back to the Redbridge 'Ford United' days. 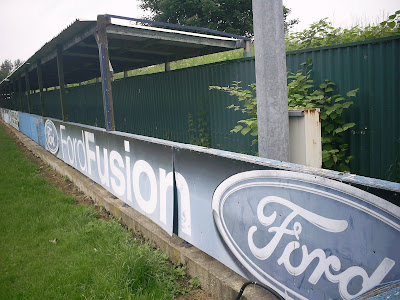 A nice stretch of cover down here, I could imagine a cracking, intimidating din, if they ever had a big cup game here. 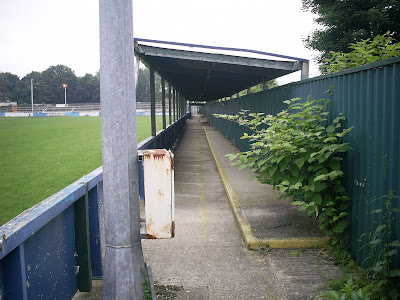 And a look back behind the goal from the side. 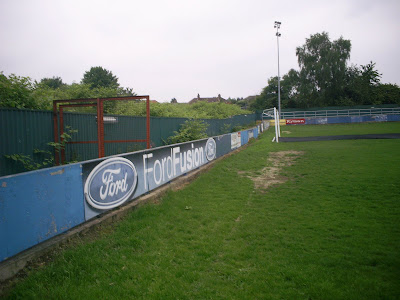 Further down the covered terrace. 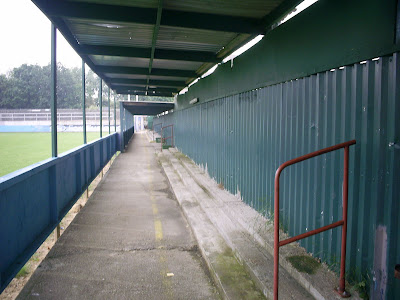 And so to the open terrace behind the other goal. Strange in that you have a higher vantage point, leaning up against the railing, above the steps. 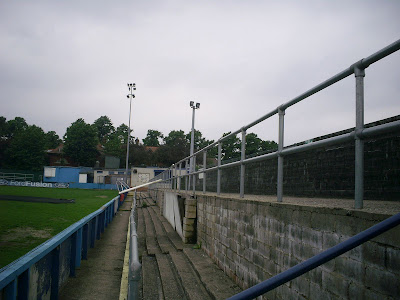 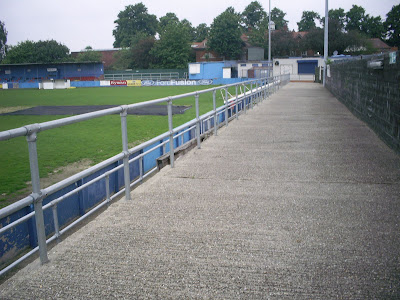 From up here we look back down the covered side, which ends our visit. 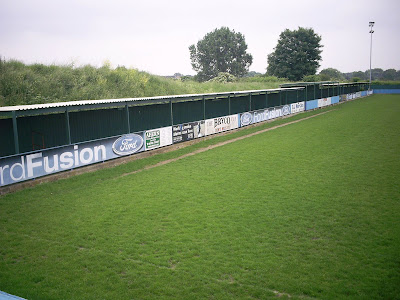