Dartford's new ground is one of the most impressive I've been to. despite being a bit uniform, it oozes character. Because some thought has been put into the design, with plenty of wood, rather than soulless steel. It'n not the biggest fo gorunds, but certainly more than adequate to take them back up to Conference National, if they were to rise that far. Which would be some achievement having lost their old ground, being nomadically homeless for so many years, and having dropped down to the Kent League.
Princes Park was built with the support of the local council, which is superb, and should be used a a template for supporting local clubs up and down the country. But the thing that surprises me, and shames me, is that it is actually a conservative council!
I visited here in its first season of opening, towards the latter part of 2006/07, when my team Dulwich Hamlet were the visitors. And have been back once, to see Kent Ravens play rugby league there. 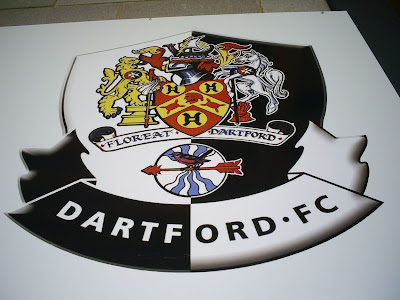 Well signposted from the main road. 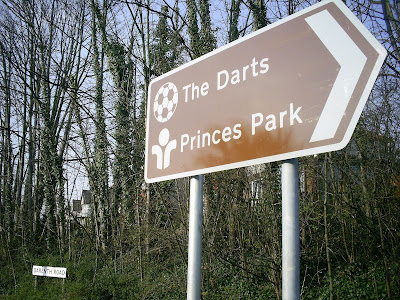 Only one access road mind, up to the ground (this was after the match) 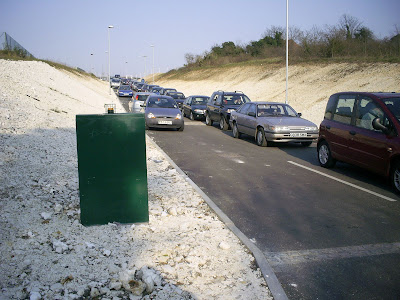 A multi use place, which was a proviso of council investment I believe. 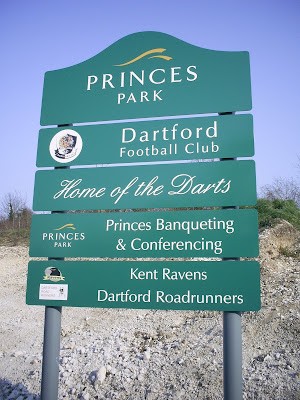 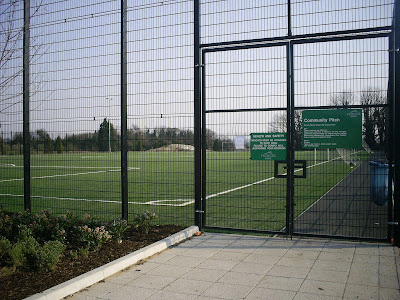 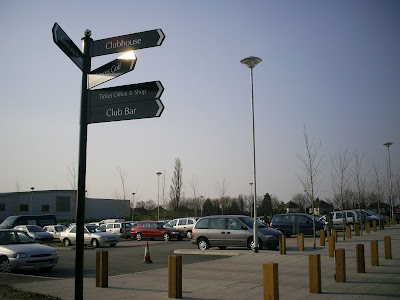 The main buildings. Impressive or what? 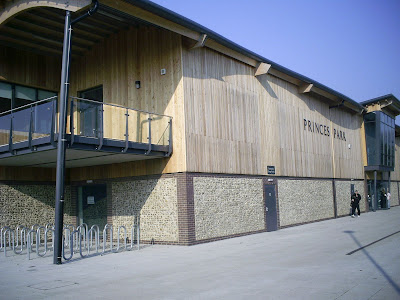 Inside the bar areas famous football quotes adorn the walls. 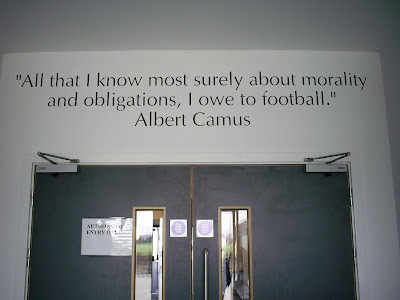 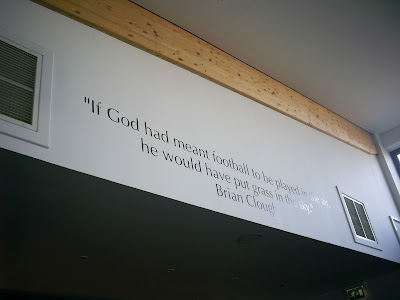 With the local council proud of their investment. 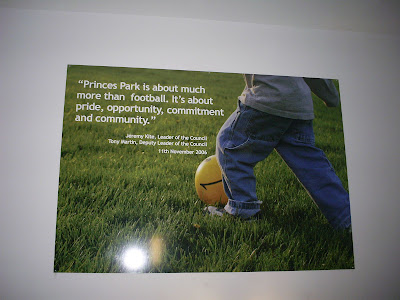 And so into the ground itself. For once these snaps aren't in any particular order. The ground is 'very samey' on all four sides, and to be honest, I'm not entirely sure which end is which! The seats, in this photo, are all down one side, and if I have one ciriticism of the ground it is that-if the club progresses- they may not have enough of them. But that's a minor moan from me. 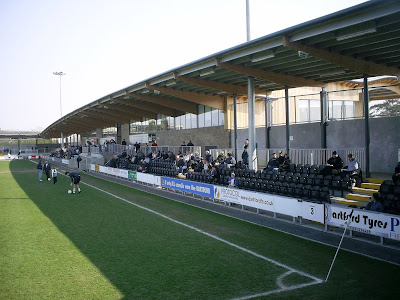 Behind the goal, from the car park end. Note that wooden statue in the background, you wil see more of that soon... 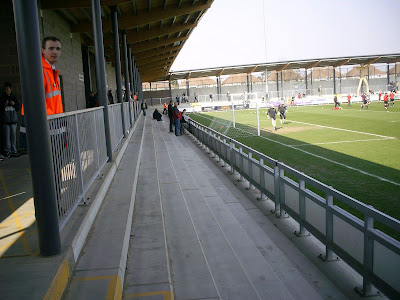 This is the same end from the side. 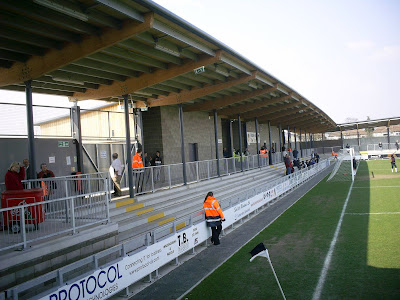 A good view of the wooden roof, which goes all the way round. 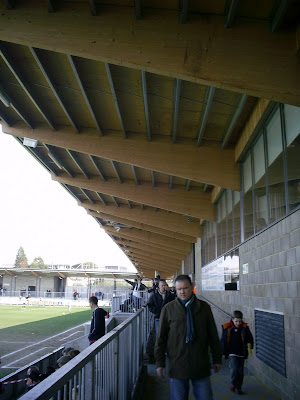 Looking back across from the far end from the car park, behind the seats. 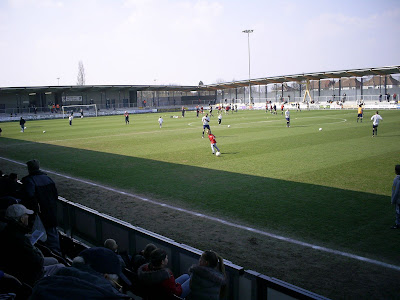 I'm not entirely sure which end this is! I think it may have been the far one...sorry, I took these quite a while ago. 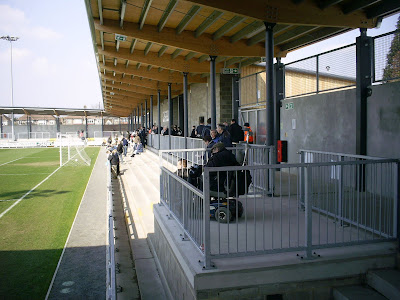 Here is another view down the seats. 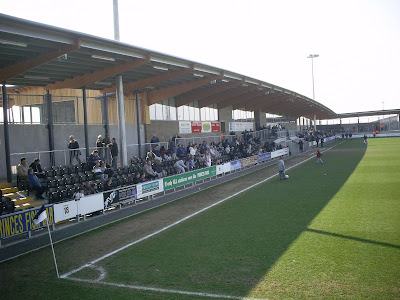 A Dartford stalwart had passed away, the back drop gives a good look at the stadium. 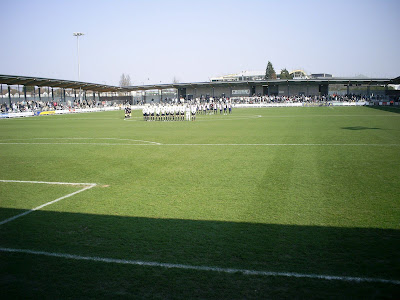 Another look at the seats, with the solar powering on the roof clearly visible
. 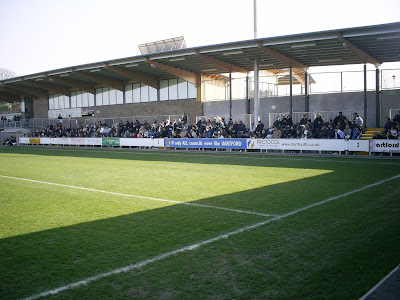 Wear your colours, as one of our fans clearly does! 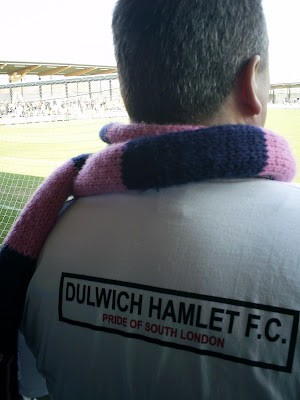 And this is that wooden sculpture I mentioned! I think it's marvellous! Apparently carved from an old oak that had to be felled when the site was cleared. 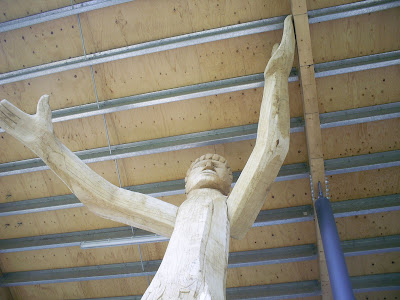 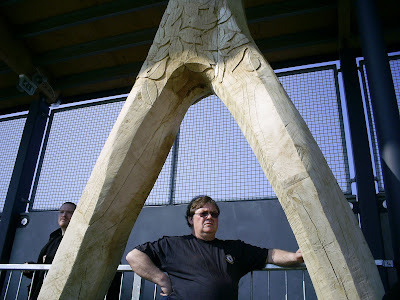 Give us a break...I'm allowed one attempt at an 'arty farty' shot aren't I? 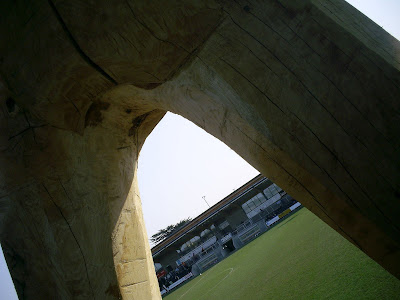 Forthcoming games...I think it will be quite a while before the Darts play either two in a league match again. 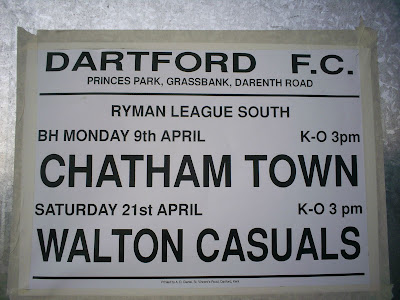 This is looking down the side terracing, the sculpture being at the other end. 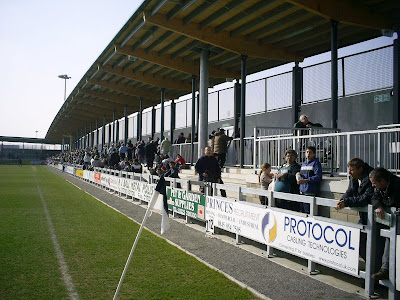 And that's it really, sorry i didn't take more, I wasn't really in 'ground blogging' mode back then.
I did take this one though, jsut to warn you about the 'ground catering'. Clearly someone doesn't like the food! 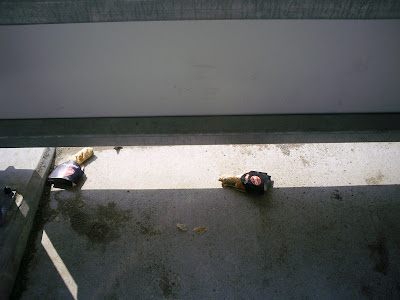 But before we bid Princes Park completely I show you two very similar shots of dusk drawing in, over a Friday night Kent Ravens match there, which was their first ever match staged here: 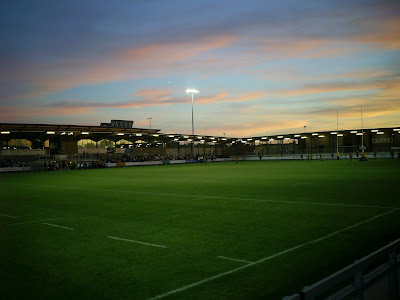 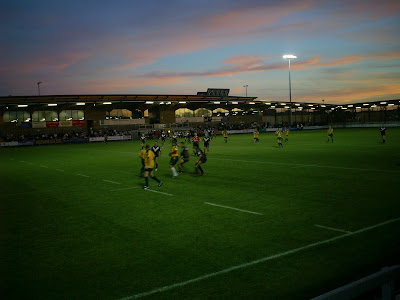 I am really impressed about this stadium. But also the area surrounding it - and the city as well.
Clearly a forward-thinking council, city and sport society.
If I ever will move to England, then this seems like a great destination.

The council being 'forward thinking' is quite unusual in England!
If you ever look back Jacob, where are you from?
Thanks for looking at my blog.

"The council being 'forward thinking' is quite unusual in England!"
- well.. I guess it depends much from council to council - just like here in Denmark, where I live.

I have actually used this ground as an example, to fellow supporters, for how a future stadium for our club could be prepared for a long term future.
They play at this, in some way, horrible athletics stadium.
These track-and-field multi-use stadium is very common, unfortunately.
From the very beginning of investment in sports facilities here, it has been used.
So a running track is common in lower leagues - indcluding my town.
Even after the club presented some kind of green stadium, which would 'blend in' with the landscape (cranky neighbours and 'antisocial' citizens is after financing, the next biggest problem here), the council was not very much into talking.
(unsurprisingly over the decades the council have become known between football fans nationaly as very anti-friendly with sport, even though the city besides the top-flight football-team has the 2. best tennis club in the country.
Which make the sport entusiasts achievements in the area more impressive.
But the council prefer to build a new stadium at the same site, or the adjacent training pitches.
But the facts are that they need more space.
It will be like moving from a 1-bedroom apartment to another of the exact same size - but this time you have bought some ekstra furniture..
The best option is a big site right beside a main road, just under 1 km. away.
But they seem to stick with some odd agreement from many years ago, that that piece of land only is to be used as agriculture.
Crazy when it is right up the city border.

On top of that a town not far away, which was involved in one of the biggest corruption cases in DK's history, has a football team, with a stadium which can hold around 10.000 (which is good here.).
It is clearly that there facilities was paid by non-existing money.
- the state provides that 'municipality' with extra founding, bacause of the priviously reckless spending, and economic chaos.
And oh.. then my club do not have the big money, so the good talents, which they are nationaly recognised for, often shift to that club, without economic benefit to my club.

Because of there former mayor's often characterized expensive red-vine drinking on tax-payers money, they have the flattering name:
FC Red Vine.

Sorry for the long story.
Sometimes you can keep going when it comes a topic which affects you.

The point is, that I really do understand and know how much The Darts can, will and shall enjoy there conditions they have been giving.

It is not easy to be a football follower always.

PS. I do have read a little about Dulwich Hamlet FC, and was quite impressed with the stories of Champion Hill in the past and such etc.
Good to see a loyal supporter.

I miss that here in my country.
The national association just keep cutting the leagues sizes down.

So an uneven number of home and away matches against different opponents in the league.

I think it dammages the away-fans-culture, beacuse it is an unfair league system, and it is unclear who you will meet, when and why.

Now I let my fingers put to rest..

(By the way.. I am looking to know of any similar developments like this ground around the football world.
It is a strong argument, to give influencive people and decision makers/takers, that others can do it.)

A long comment Jacob, but also great to read! Thank you.

You clealry have the same problems in your country, as we do, with neighbours. NIMBYs they are called in English. It stands for Not In My Back Yard.

Sadly I've not been to any danish grounds, one day maybe?