I saw a game at this ground, currently home to Viktoria Zizkov B, on my first groundhopping trip to Prague, back in October 2003, when it was the home of SC Xaverov Horni Pocernice. As I remember it it was very cold, & a bloody awful match, but there you go, they can be sometimes!

I'm no 'expert' on Czech football politics, but I believe this club was bought out by the 'fake' Bohemians, who then moved elsewhere, & thus this place became the FK Viktoria Zizkov training ground, & home for their B team.

Whatever, it's a nice little ground, & worth a visit, on the edge of Prague, about a mile from the nearest Metro, uphill, but there are a number of buses, if you've got a one day public transport pass. 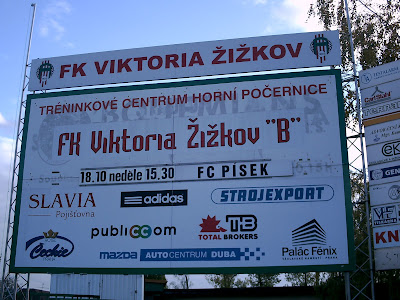 Here is the entrance from the road. 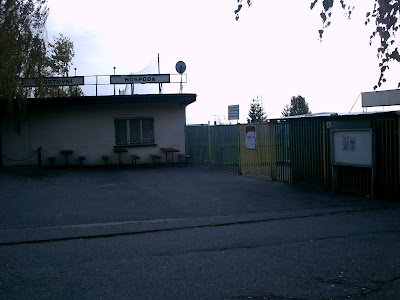 To the right of that is this entrance, round the corner. Note the beer stands through the gates. 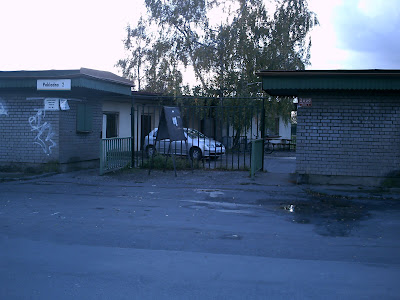 Moving along, still outside, is the back of the main stand, which has the bar restaurant area on the first floor, with changing rooms & offices down below. Note the sign ,that still says Xaverov. 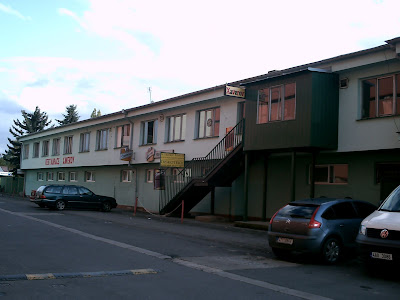 We go inside through the open gates we saw a couple of photos ago. To our right is the refreshment area, with the main stand just past it. 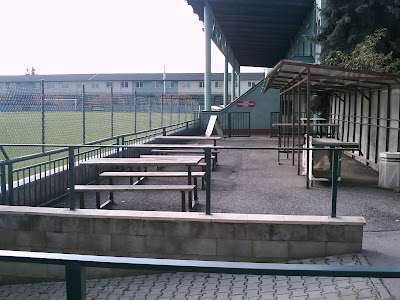 To our left, behind the goal, is an open stand, which, if momory serves me right, was the 'away' section. 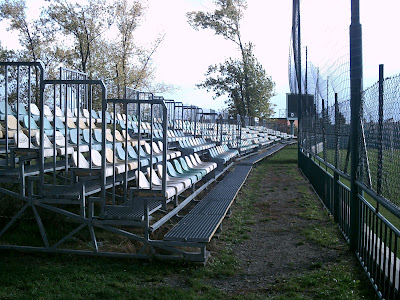 In the corner beyond the seats is the scoreboard. 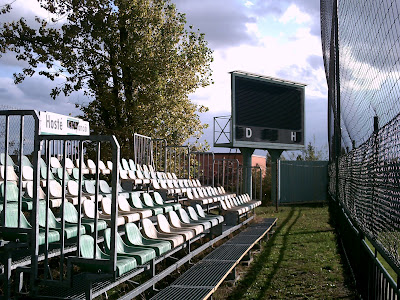 From this spot we turn round, and get our first look at the main stand. 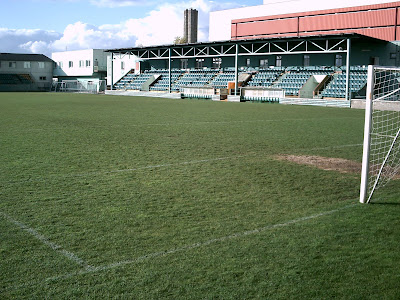 Now at the front of the main stand we glance back at that open end. 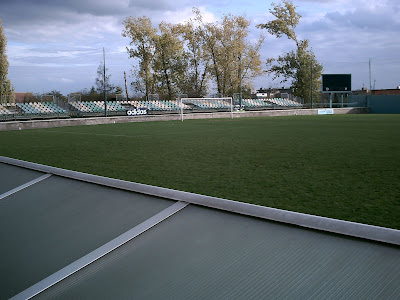 To our right, at the other end is another bank od open seating, set above the pitch, with other club buildings, for the secondary pitches, & the rest of the complex, behind. 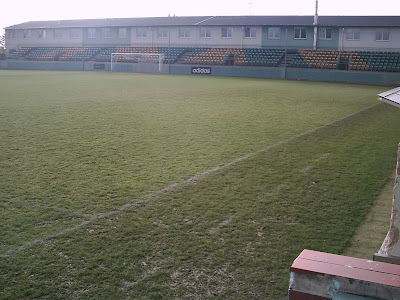 Here we are, by the players tunnel, looking up into the stand. 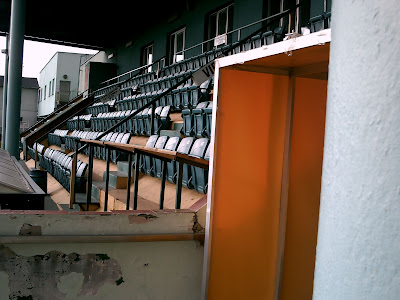 The small telly gantry in the stand. 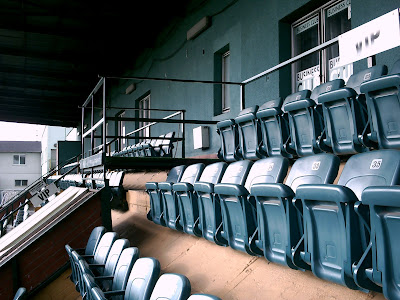 Looking at the far goal, from in the 'VIP' seats. 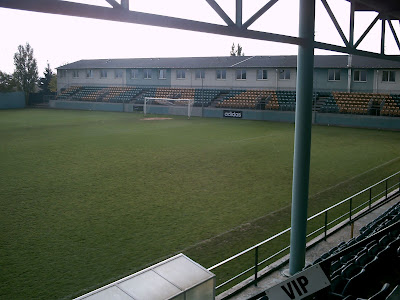 And the other end, from on the gantry. 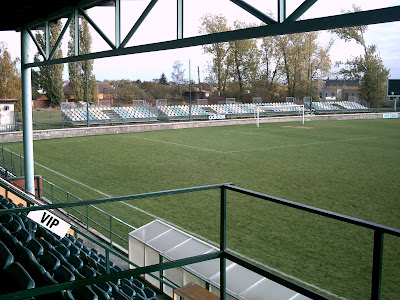 Over the pitch, we see there is nothing at all on the down the far side. This is a three-sided stadium. 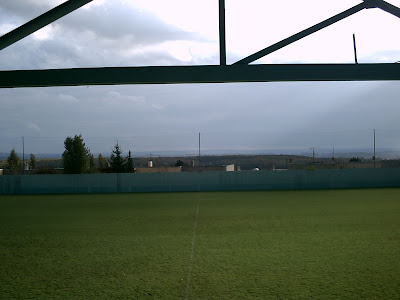 Another view across the seats. 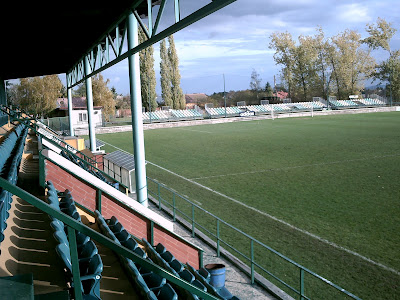 On the pitch now, we look at the main stand. 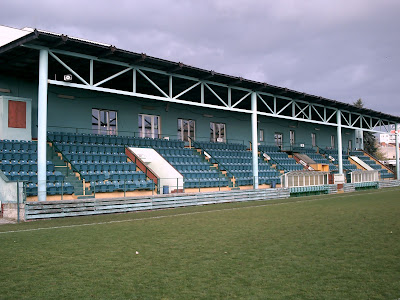 Looking directly at the tunnel & dugouts. 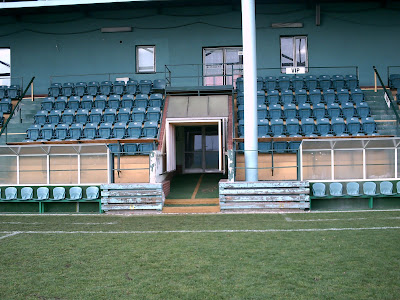 An angled shot of the dugouts, stand in view behind. 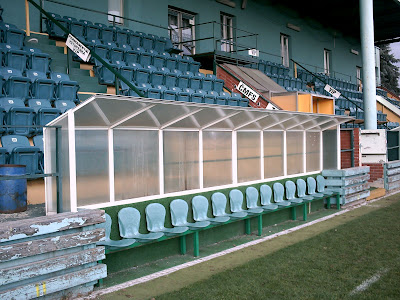 Stepping back a little, we get a side angle of the seats from the pitch. 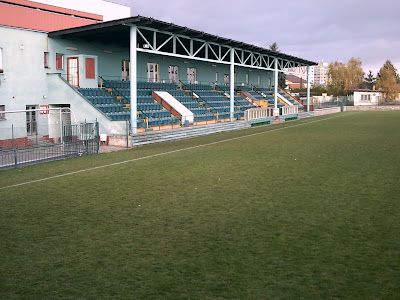 Moving along we turn toward the higher seats behind the goal. 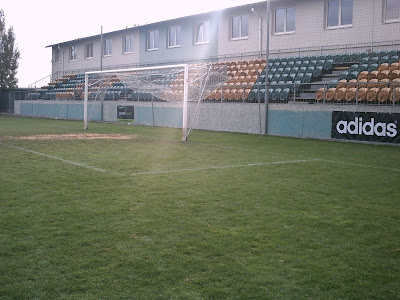 Back behind the pitch perimeter, it's open hard standing, along with assorted 'football ground junk', to the bank of seats behind the goal. 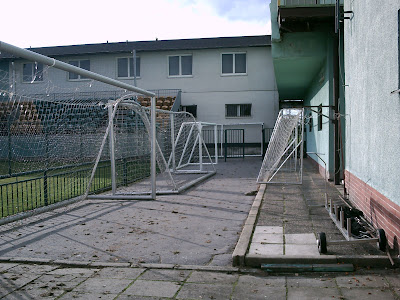 Now we are behind the goal, at last. Time to see what's the other side of those buildings... 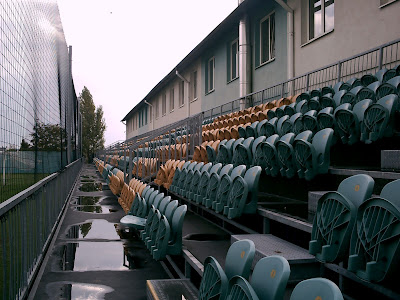 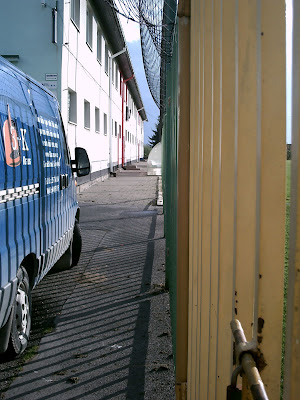 Here's a better view, through the fence behind the goal. 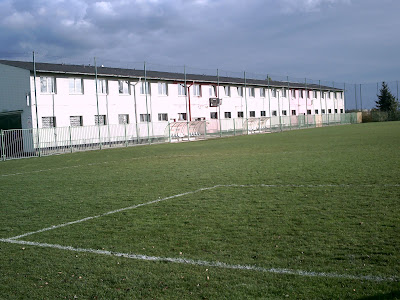 This is the same goal area, as the photo above, local indoor tennis club behind. 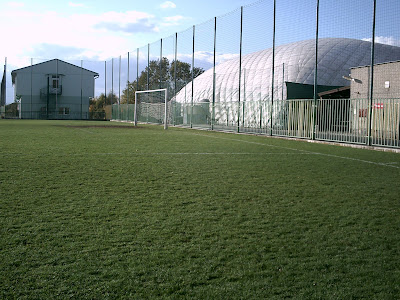 The far side of this pitch is railed off. 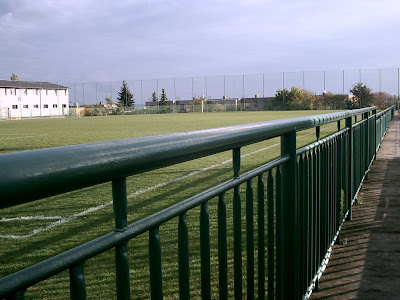 And there is a sction of terracing, further along. 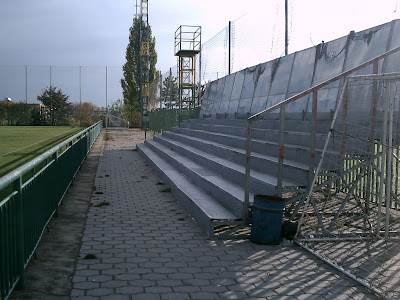 Behind that there is a third pitch. 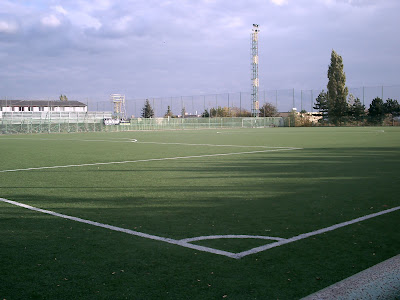 And along the far side of that is a stretch of covered terrace. 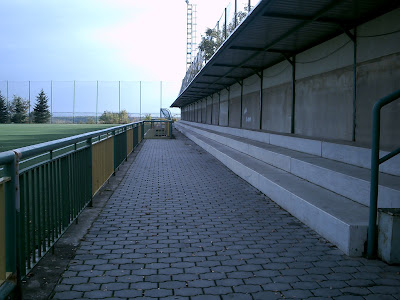