This is the Queen Elizabeth Stadium, in Donkey Lane, Enfield. Not too far from the old site of Enfield Football Club, in Southbury Road, now housed over. There is renewed talk of this athletics track venue being redeveloped & used a home in Enfield for the football club. Whether that be Enfield 1893 (in effect the 'old' Enfield); Enfield Town, currently at Brimsdown Rovers ( the team set up by the old Enfield fans to bring the town team back into the Borough of Enfield); or a merger of the two no-one seems to know. It is all speculation. Having been in the area recently I took the chance to try to look at the site for a possible future non-league ground.

There appeared to be faded rugby pitch markings on the grass, presumably used by the local rugby union club, until the stadium was closed down by the council. 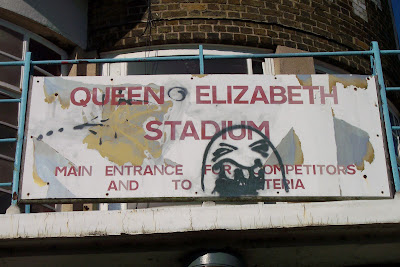 And this small sign on one of the doors tells you it's shut! 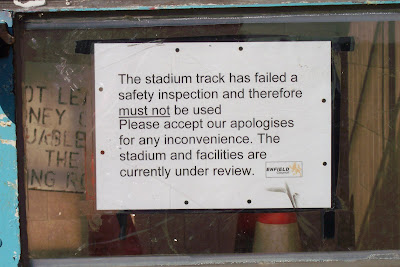 Here's the pavilion from outside. 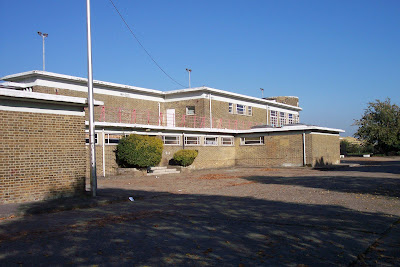 Once inside, at first glance, it's looks half decent. 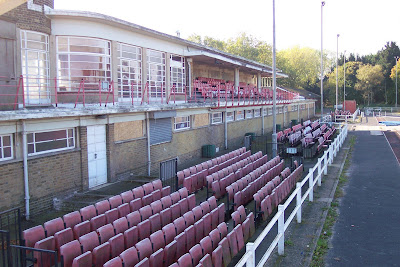 But on close inspection it's clearly run down, and in a vety bad state. I would be surprised it you got any change from at least a million quid to bring it up to basic Isthmian League standard. 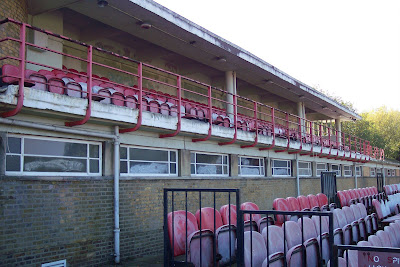 Rather than 'walk & talk' you round the stadium I'll just let you look around without my comments. It's in such a state there's not really much to be said is there? 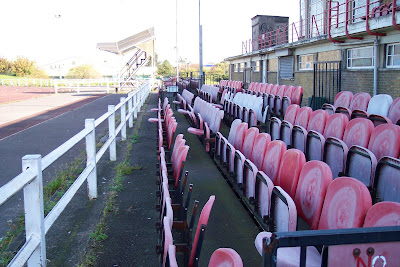 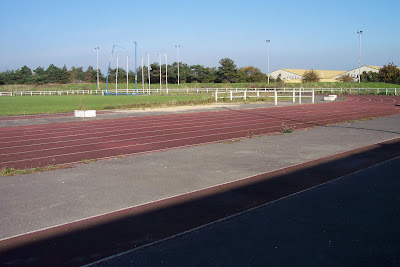 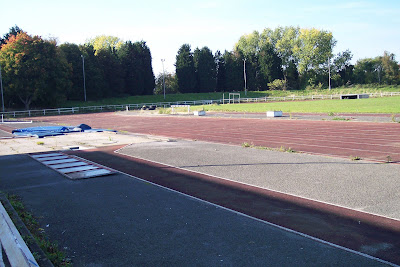 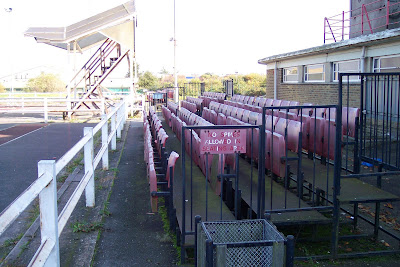 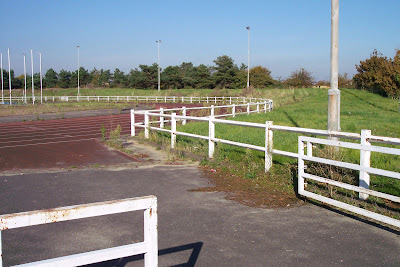 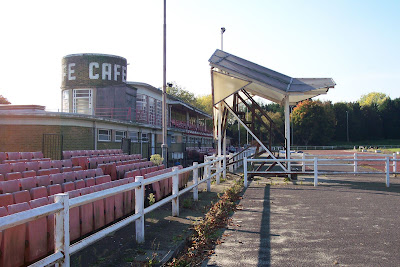 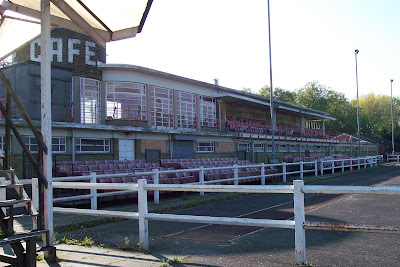 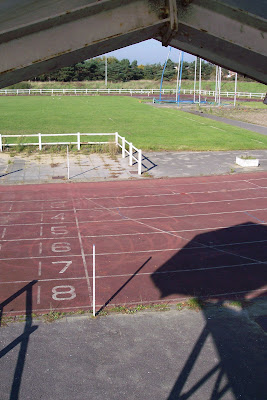 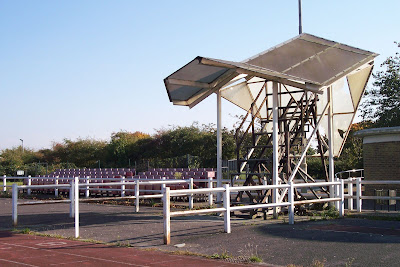 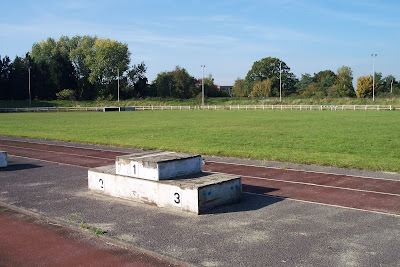 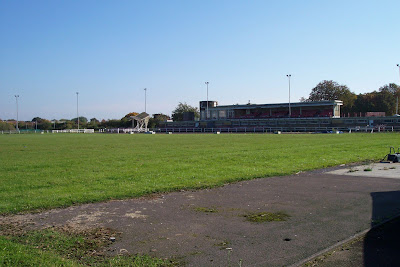 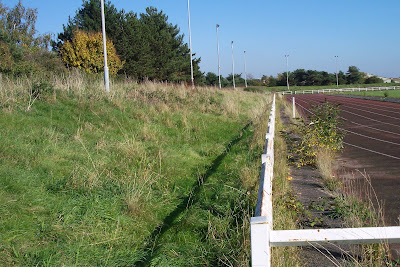 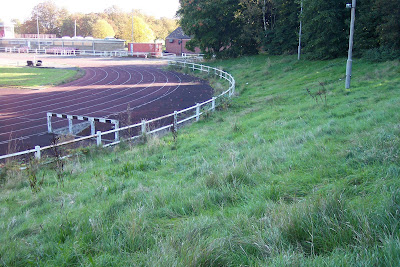 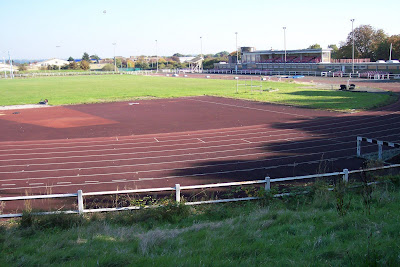 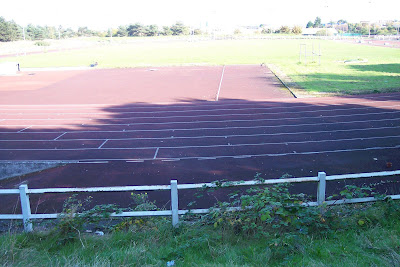 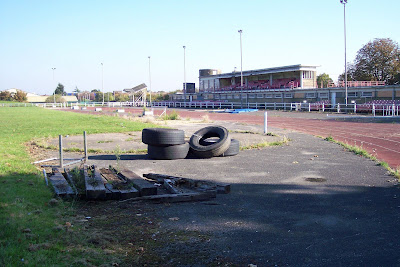 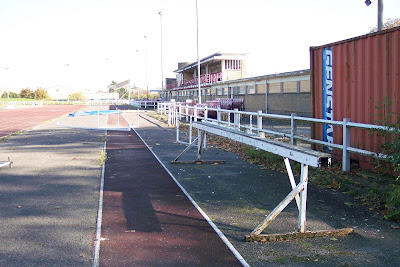 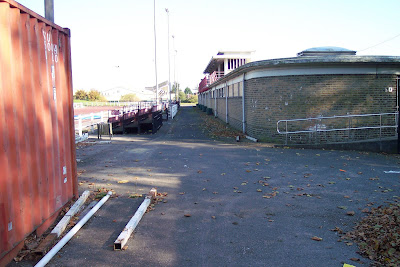 Next to the stadium is this clubhouse for Enfield Ignatians RFC. Presumably they previously played in the stadium? 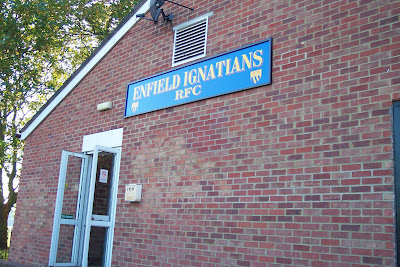 Next door is a large open space, called Enfield Playing Fields, with well over a dozen football pitches, and a couple of rugby ones. A, sort of, 'mini-Hackney Marshes'. This poster, on the park noticeboard, clearly shows there is a local determination to save the stadium. 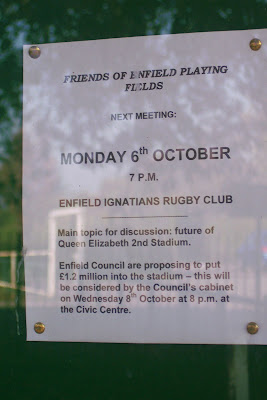 I suppose you could phone the council on this number to find out more! 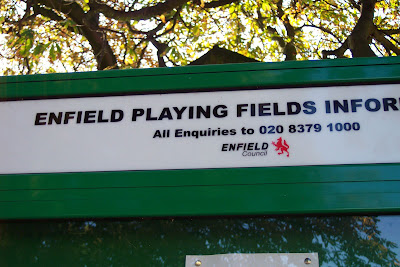 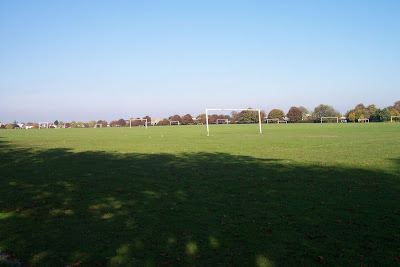 with this one, at the far end, particularly poignant. For those houses are built on the site of the old Enfield football ground. 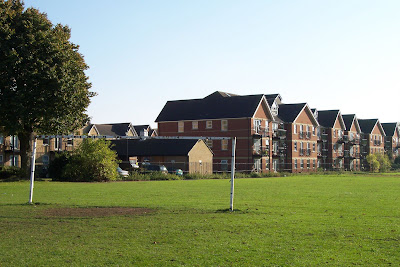 I briefly wandered round the development, looking in vain for any mention of the previous footballing occupants. A terrible shame the local authority can't even erect a plaque of some sort to commemorate the famous old club that brought such pride to the name of Enfield. Guilty conscience perhaps at 'losing them'? 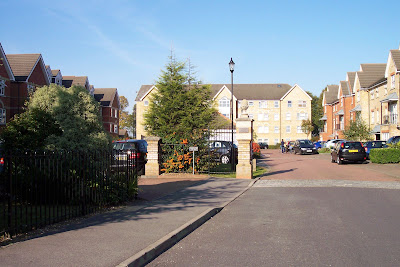 Thanks for posting these. I used to walk past this stadium on my way to school in the early 80s, where my PE teacher was also an Enfield player. It was also used for a while by Enfield Harriers athletic club (if I remember correctly). It's very sad to see it in this state now, and regrettable that the local authority is prepared to let the town's sporting heritage (and future) rot away.

Oops. I saw the sign proposing the £1.2 million restoration after saying that the local authority were prepared to let it rot. I obviously retract that bit, but stand by the belief that it's sad that it was allowed to deteriorate so much in the first place.

all these clubs have only themselves to blame. they did zero to get fans in when they wetre going. look at hendon, they never advertised their games i9n an area where they were the only alternative to arsenal,it would nice to get together about 200 fans of football to go to grounds that are failing like Clapton. This would mean going every game and getting them more support to survive

Easier said than done. Local advertising simply doesn't draw people in. Something like that is far too simplistic. hendon have one of the more pro-active supporters group, who try to pulbicise their games, going back to when they were at Claremont Road. Like it or not, the majority of people are just not really interested in attending non-league football regularly.