FC Rouen currently play at the stade Robert-Diochon, & play in CFA, which is the fourth level of French football. Diochon was a co-founder of the club, & was club chairman for 47 years.
It wasn't a ground I'd planned to look at, I had been to Dieppe the day before, back in May 2007, to watch Red Star, with a couple of fellow Dulwich Hamlet fans.
We were going to a local level six game, & beforehand we were looking for the cemetery where a Dulwich Hamlet player was laid to rest after dying for his country in the First World War. The FC Rouen ground ,by coincindence, happened to be right next door to the cemetery! 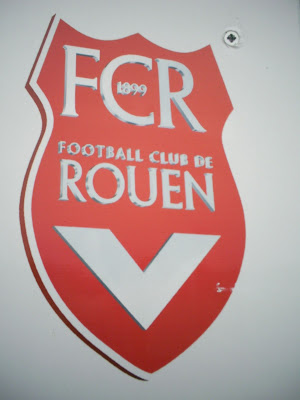 This is the ground from outside, as we approached it. At this stage we had no idea if we would be able to get inside. 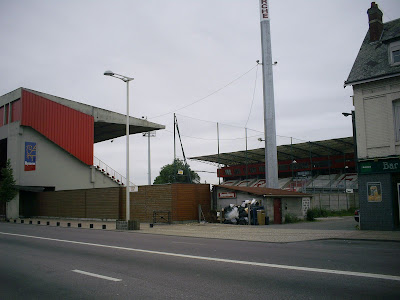 We walked up to the other end & found a gate open. Marvellous! This is the corner we entered the ground. 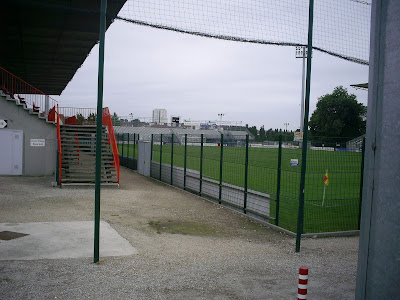 Behind the goal at this end is a 'temporary' style open bank of seats. 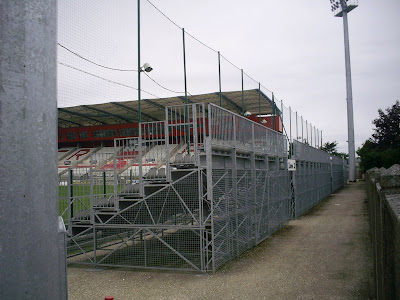 The town emblem is on the side of the stand. 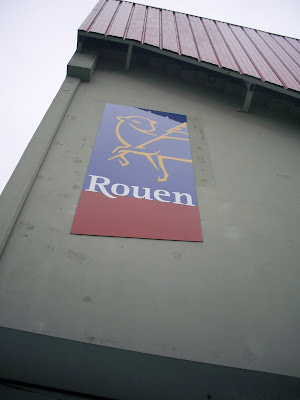 Back outside here are the ticket booths. 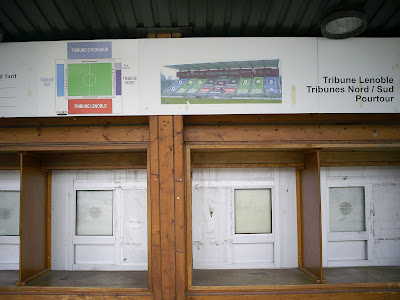 I was well pleased to see this Red Star sticker! 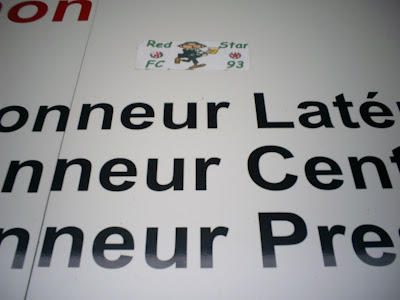 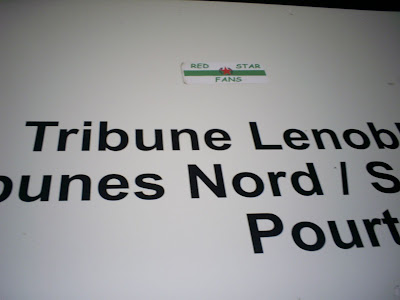 Here I've walked along to the other corner behind the goal. 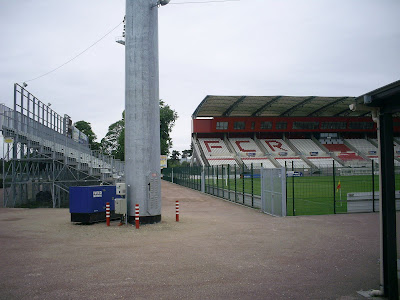 This is the superb main stand. you have to remember this is a regional fourth division ground! 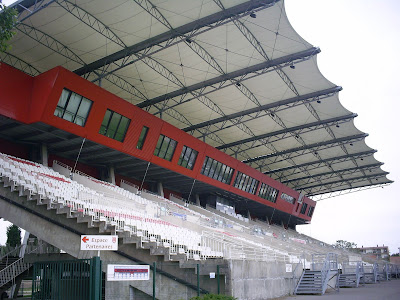 A shot looking up at the open seats. 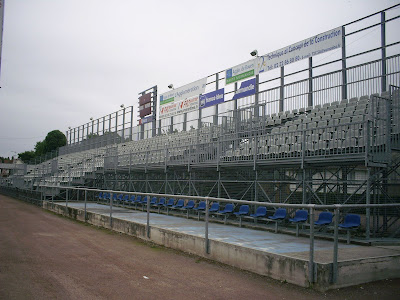 This is the stand on the other side. 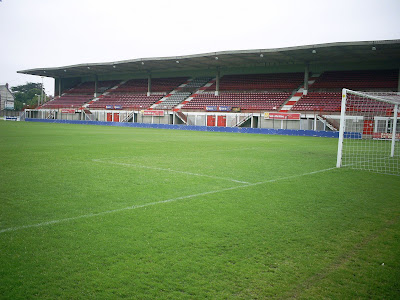 From behind the goal, through the net, we look through the goal to the far end. Unfortunately, for whatever reason I don't know, I didn't bother to walk down towards the other goal. Sorry about that! 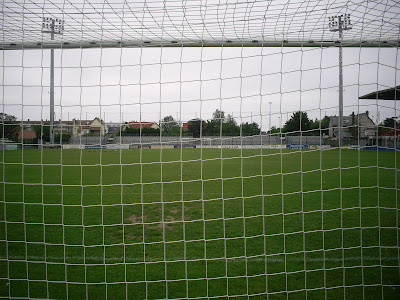 Another picture of the main stand. modern, but with real character. 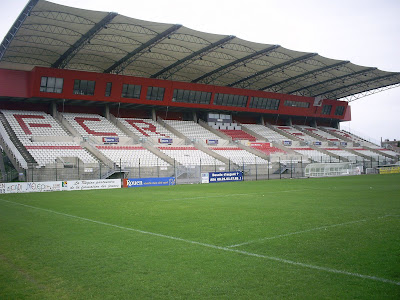 So impressed, I even went for this attempt of an 'arty-farty' shot! 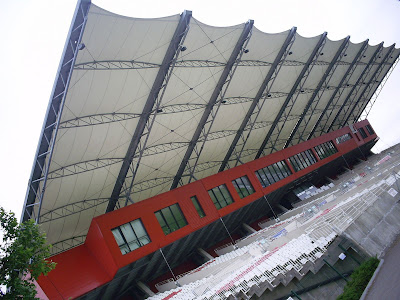 This is a fellow Hamlet fan Paul Griffin, taking his own snaps. Well he WAS a fan back then. Now he's 'sold his soul' & gone over to the committee! Last night at horsham YMCA some of our fans were using some of our 'traditional,choice' language. One of their committee passed us, and said he was going to complain to our officials. First one round was...Griff! Telling the 'Rabble' to behave! Oh how he has changed! ;-) 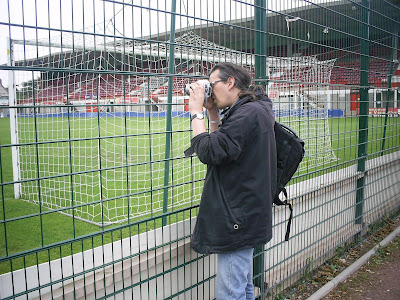 Just outside the ground is the second pitch, a railed off one. 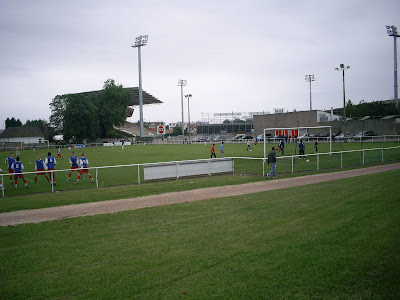 This is a general shot of the St. Sever Cemetery, just beyond the second pitch. 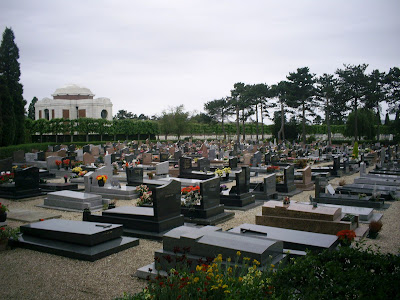 And here is the headstone for Tommy Rose. The scarf won't have stayed long, as I don't think they allow things like that, it was just our little gesture. In the soil by the headstone we each took a moment to bury a Dulwich Hamlet enamel badge, so he will always be remembered. Even though the First World War was a very long time ago, it was a very moving moment, where we could pay tribute & remember one of our own. Tommy Rose rest in peace. 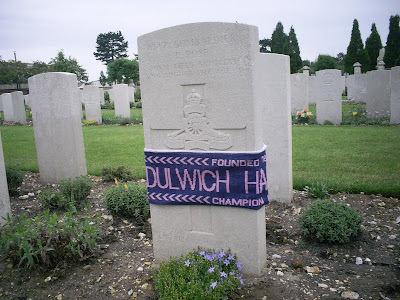 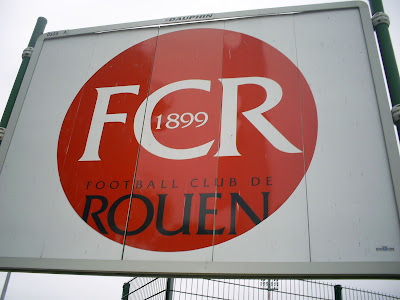