The 02 Arena is a multi-purpose venue, which I've only been to once. This was for a basketball match on 6th September 2008, for a Great Britain versus the Czech Republic, in a Group D Eurobasket 2009 qualifier. Team GB, an expression I hate, won 87-68.

As I say this was my first, & only visit to the 02, which also stages other sports such as boxing & ice hockey, but for the purpose of this posting I am filing under 'basketball', as this will be the main basketball venue for the London 2012 Olympic Games.

It was enjoyable enough, as I was with a fellow Dulwich Hamlet fan, Larry, who is a basketball fan, & who got me the ticket, so I could ask him about anything I didn't understand. 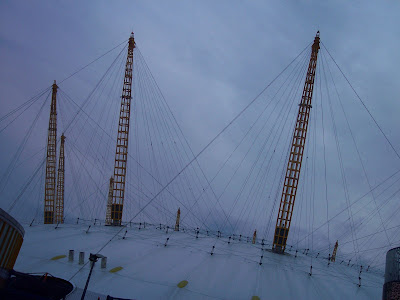 The match is advertised on the electronic hoardings outside. 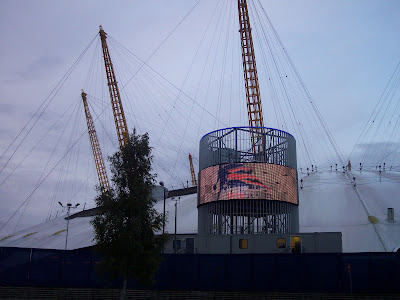 A decent crowd outside, they published the attendance as exactly 7,000. 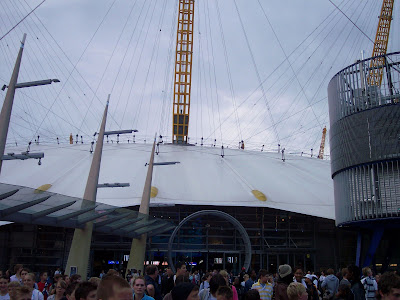 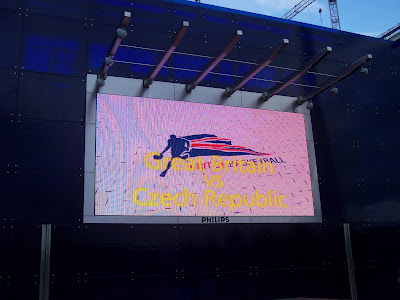 The way in was through here. 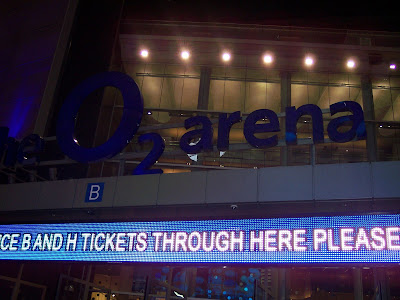 As someone who'd not been to the 02 before I was taking a keen interest in the design of this so called 'white elephant'. 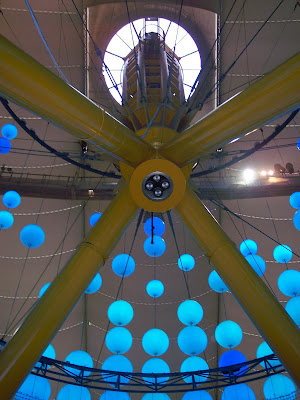 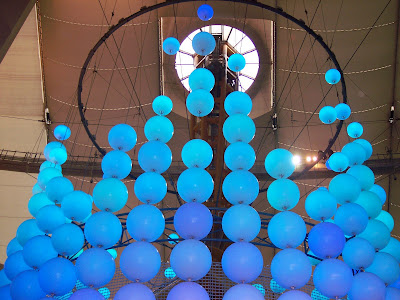 Another view of the roof, from inside the concourses. 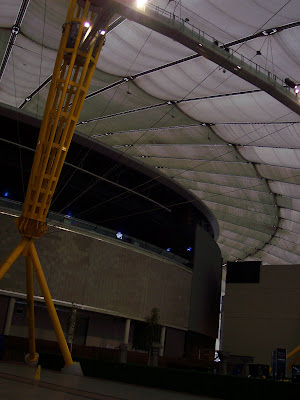 And here we are inside the arena itself. clearly nothing like a full house, but I was surprised by the size of the crowd. This section was to the left of my seats. 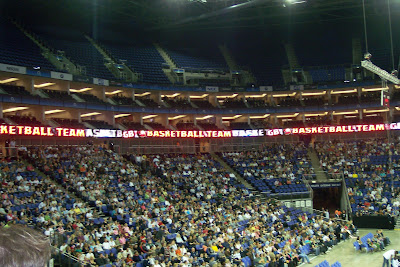 Here I am behind an 'end', during an interval. 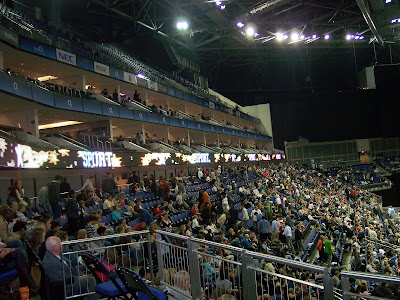 And, from the same vantage point, we look over to the section I was in.
At this point some jobsworth steward told me to stop taking photos, I asked him what his problem was, as I couldn't see any signs prohibiting it. He then told me to give him my camera, & then grabbed my arm as I walked off! I told him to let or or I'd have him for assault, & then as he was still being bloody rude to me, let forth with a stream of expletives, & told him to call his boss! Which he didn't! 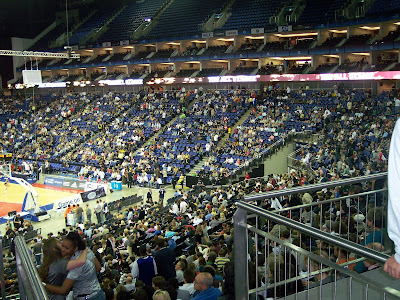 Here I am back in my seat, looking over to the national flags at the other end. 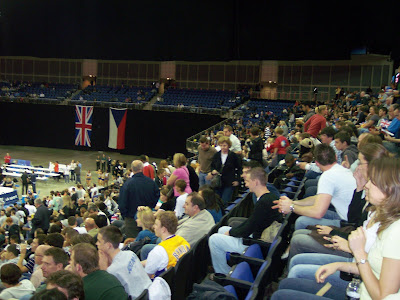 Another shot of the arena. 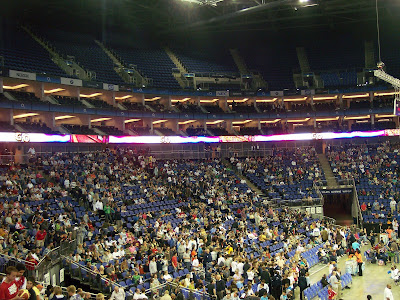 How on earth do dancers provide entertainment at the breaks. Does anyone actually watch them? Just what is the point of this 'Americanised family entertainment?' 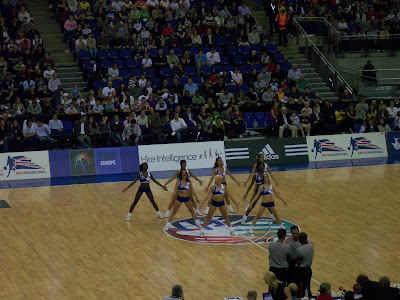 'Deng' is the big star of the Great Britain team, none other than Luol Deng, who plays in the NBL for Chicago Bulls. 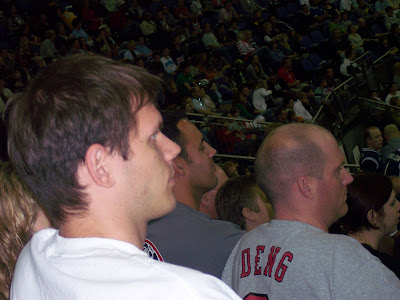 A little bit of the action. 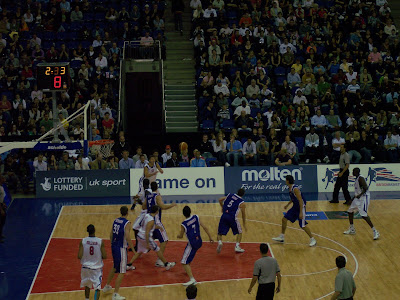 More of the game, with the far side, and scoreboard, in view. 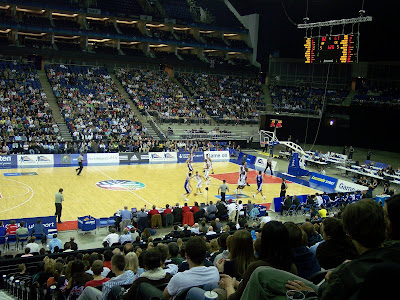 I have no idea who 'Cabourn 66' is, but it's not the bloke who was Minister of Sport sitting in front of me! ;-) 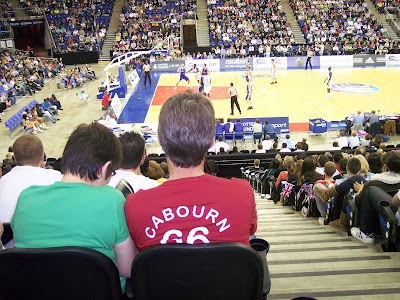 One last look across the arena, at the end of the game. 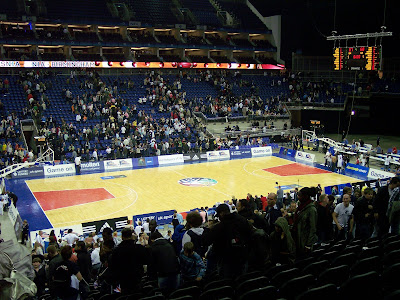 And I know it's part of 'modern arena' but I can't stand this type of annoying advertising! 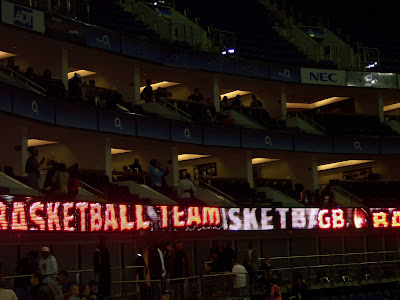