I've not seen a match here, but decided to have a look at the ground as it's on the outskirts of Leatherhead, on Easter Monday last season, as I'd been to watch the Hamlet play at Leatherhead that afternoon.
This was the home of Mole Valley SCR but in the close season 2009 they were forced out by the local council, for reasons I'm not sure of, & the ground is now apparently leased to Leatherhead FC, for their academy set up.
Which is a same, as it's clear from looking around, that Mole Valley SCR were slowly but surely improving their set up here, and are a small, but ambitious club. They compete at step six, in the Combined Counties League Division One. 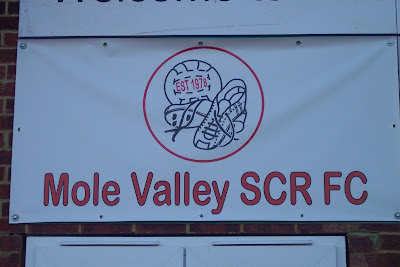 The ground itself is on River Lane, which is a narrow turning, not the easiest to spot. The cat gave me directions! ;-) 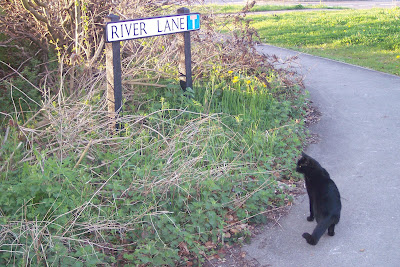 This is the entrance to the ground. Luckily I found a gap, and squeezed in. 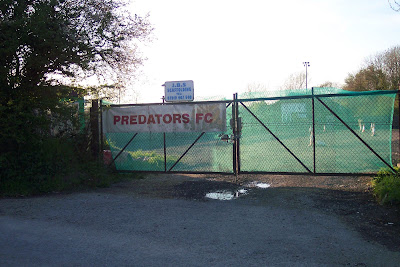 The clubhouse looks recent and smart. 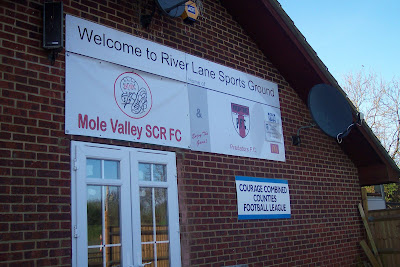 Behind it is a bit of old seating, presumably for 'future use' at the time. 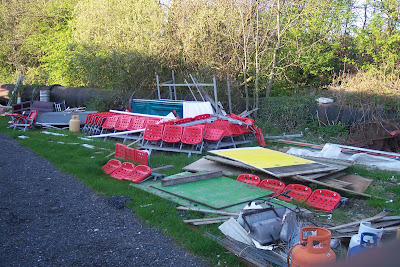 In the ground itself, from by the clubhouse, is this hut, which is where you pay to get in. I must confess that there was a box of old programmes in there, & I did 'arf inch a few! A basic area of scaffold cover is just past it, as you can see. The work appears to be an attempt at taking the club up to a higher level. 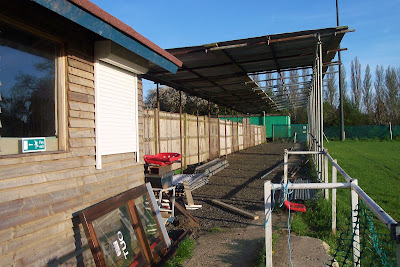 As you can see...work in progress! 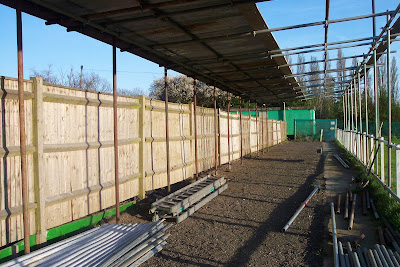 From here you can see it is open behind the goal. 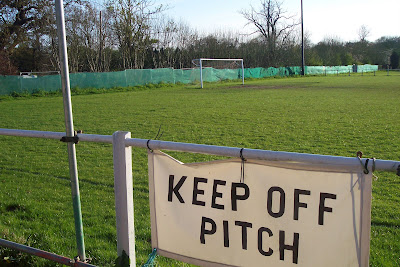 Supporters aren't supposed to go behind this goal at all. 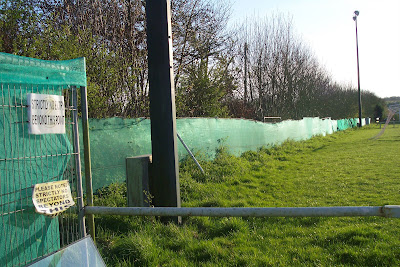 But as there's not a game on...I ignored that! ;-) Here we look back at the covered area. 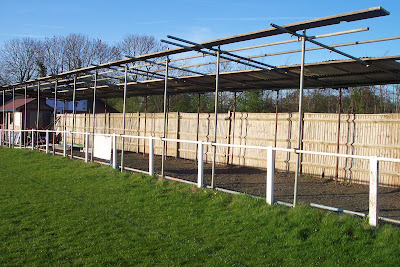 Moving on to the far corner we look back over to the main side. 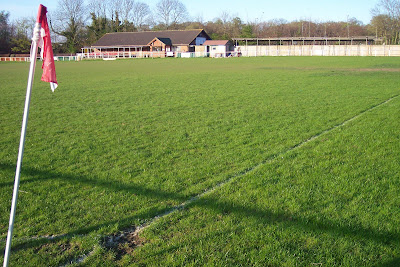 Along the far side is a path, which is railed off. 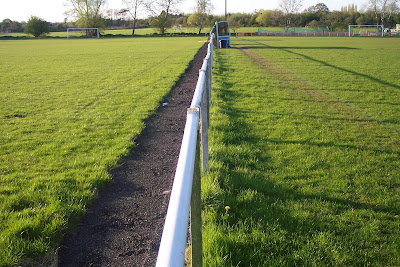 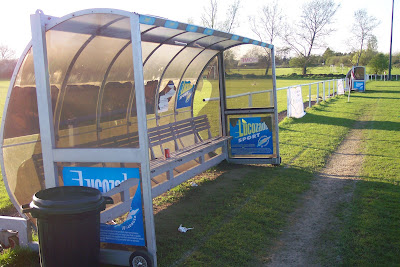 Adjacent is a second pitch, as you can see on the left. 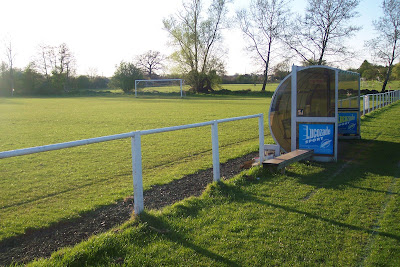 Here we're down at the far corner, & you can see how close the two pitches are. from the two corner flags! 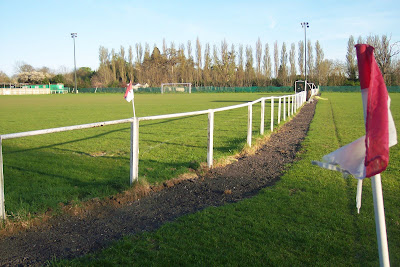 At the far end now, more railed off hard standing, and some pitch equipment! 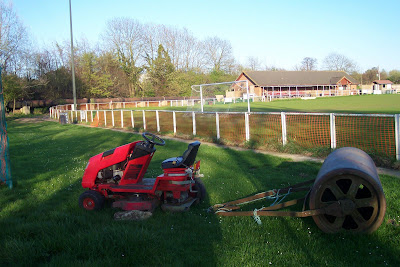 Very open, as you can see. 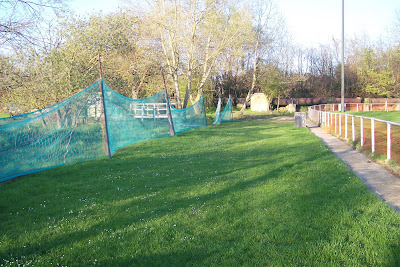 Behind this end are a couple of footbridges, over a small stream, presumably the 'river' in River Lane, which leads to more pitches. 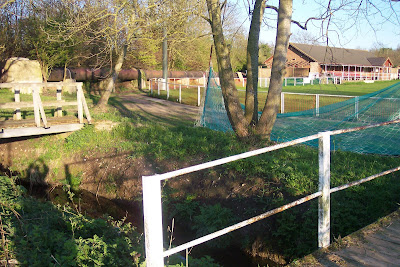 Here is the wooden one. looking over to them. 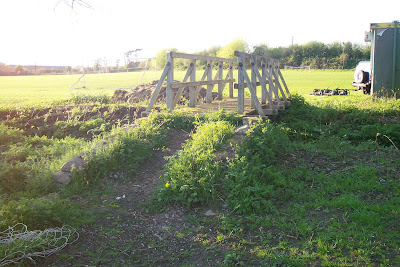 moving on round the ground now, we're looking toward the clubhouse/changing room building. I have no idea what that ugly huge pipe is. 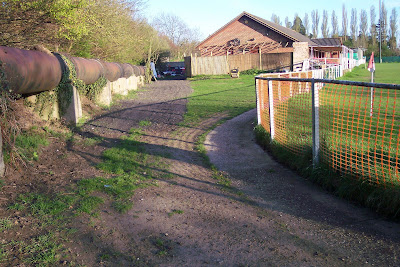 In front of the building some very basic seating has been knocked up on some scaffolding planks. 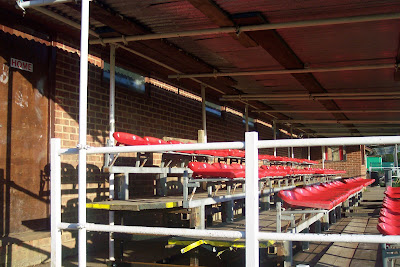 Here is a view of them, pitchside. 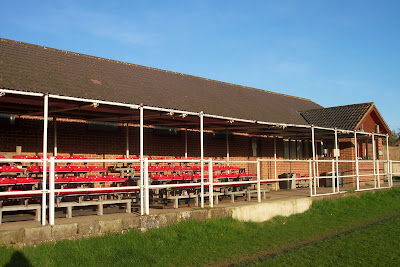 They don't actually look that bad from this angle. 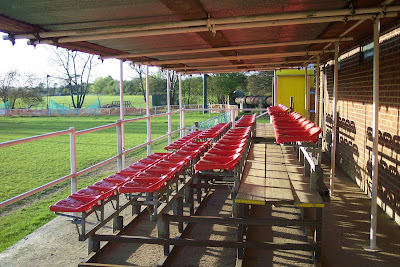 Time to go now, this is the exit, from where we started our tour. I sincerely hope this ground one day has senior non league club as it's tenant. It's simplt 'wasted' on another local non league academy base. 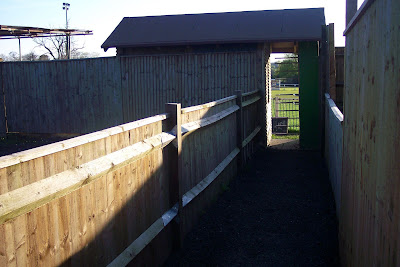