I was in Belgium for the weekend, at th end of November 2008, & I was staying with my good Belgian friends Nicolas & Danuta. On the Sunday he picked out a local Belgian level seven game between Fosses & Gembloux, which was second versus first. This is the third level in the local Namur region. He chose this game as a friend of his, called Phillip, was playing for the visitors. They won by the only goal, and his mate gave away a first half penalty, which wasn't converted!

There was no programme, nor admission to get in. But a man came round with a box during the game, & charged three euros. There looked to be about sixty spectators around the ground, including those who didn't move from within the bar!

The club were listed on the fixtures page as Fosses, but I didn't find out what the full club name was. It may be the one that was on this sign on the main club building. 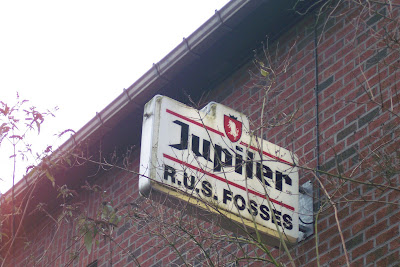 That sign was on the side of this building, which was both the bar & the changing rooms. 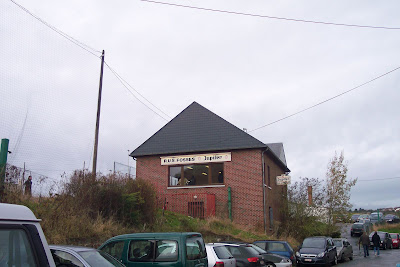 Here is another sign, so maybe the club is called JS Fossoise, and the beer signs are an older obsolete name. Fosses is on the league table, on the link I found, on goolging JS Fossoise pops up more than Fosses, so I think this may be the current name. 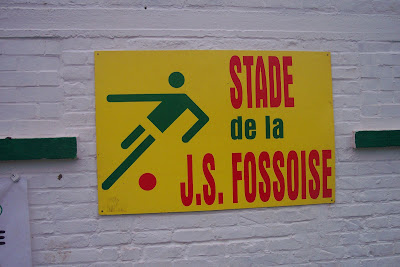 We walked past the club buidling to enter the ground, and we are at the corner of the pitch. You can see the dugouts in the distance, and we watched the match from just past there, so we will begin our tour of the ground from there. 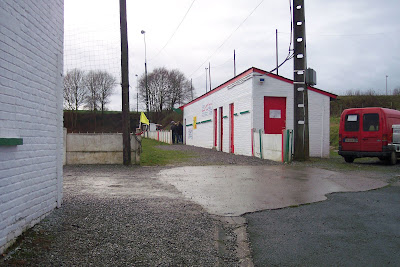 The usual shaking of hands before kick off. 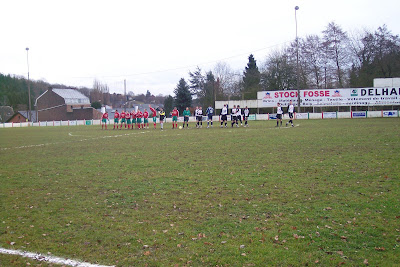 This was the penalty I mentioned. 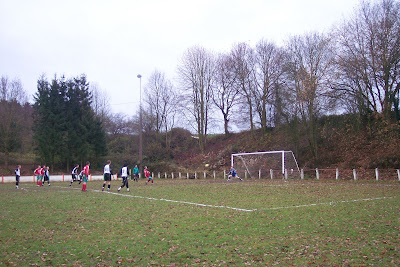 It's half time, so I begin my walk around the ground. It's a basic railed off pitch, with no cover or stand. Here I've walked up to the corner, from where we were stood. 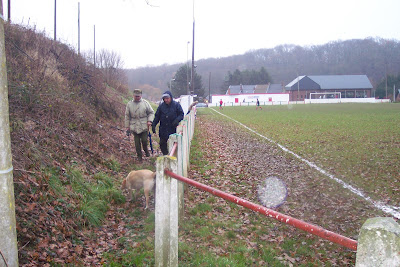 Railed off behind the goal, it is possible to stand behind the goal here, but there is a steep wooded area behind, so while you could climb up to get a better view, it would be a bit awkward. 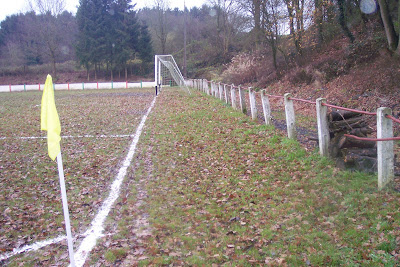 This snap, from almost the same spot, shows the steep backdrop more clearly. 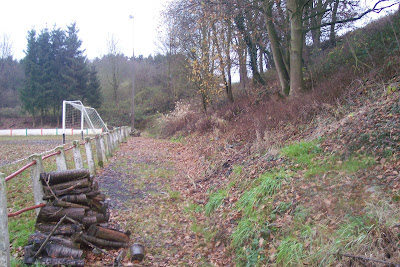 From behind the goal we look back down the dugout side. Note the 'Dulwich Hamlet' Union Jack
draped over the perimeter wall! 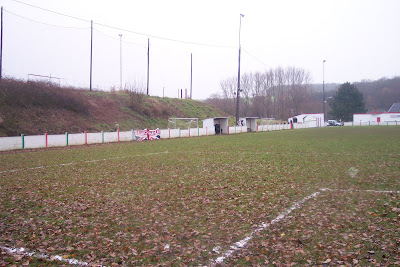 From directly behind the goal you can see how muddy it was. 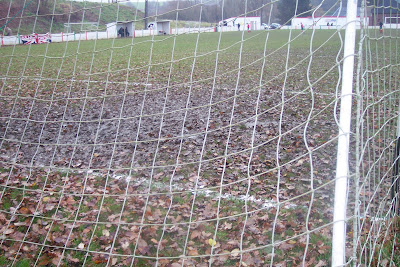 It is railed off down the far side, but somewhat overgrown, and not really suitable for watching a game from. 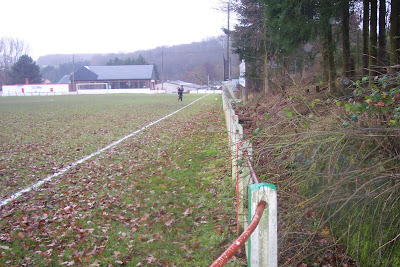 From behind the corner flag we look across the pitch. You can see what looks like another pitch higher up behind that side. 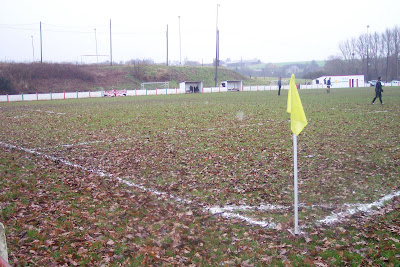 Looking across at the flag again, my mate Nicolas standing behind it, you can see the goalposts up above. 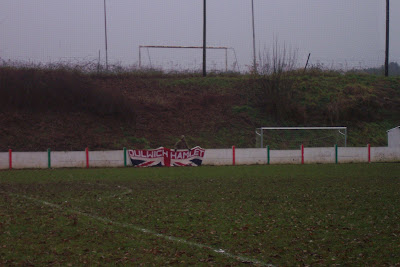 Moving along we again look over, this time to the dugouts. 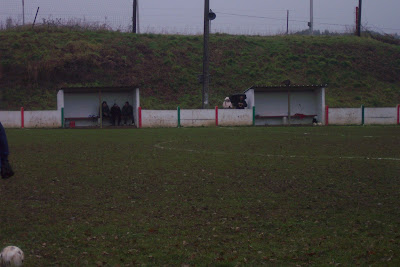 Now past the advertising hoardings on the halfway line, we look back down along the touchline. 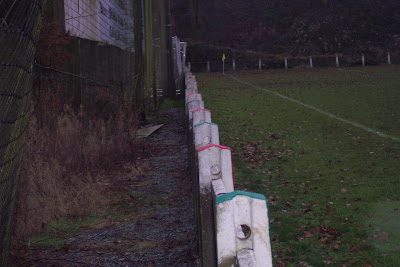 Having almost walked the full length we look behind the goal, to the bar. 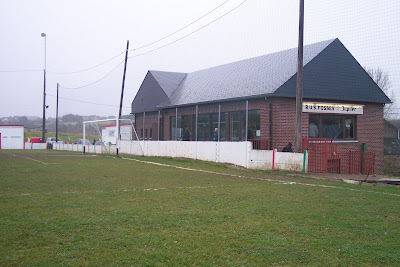 And from behind the goal we look back down the 'adverts' side. 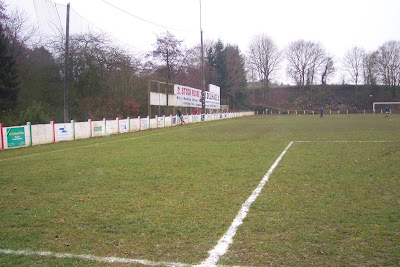 From the same spot, over to the 'dugouts' side. Note the home fans' flag in red & green left over the perimeter. 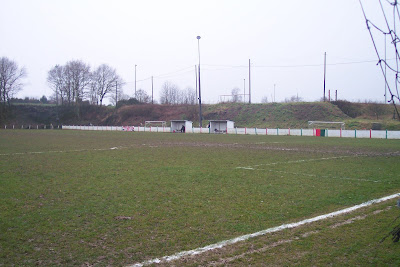 Walking past the clubhouse this area behind the goal is the only bit of decent hard standing in the ground. 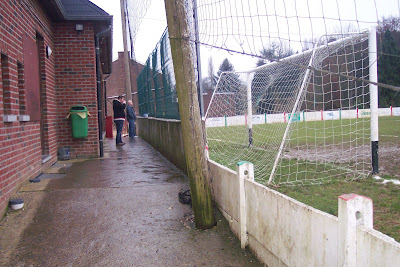 Further along we are practically back to where we entered the ground. 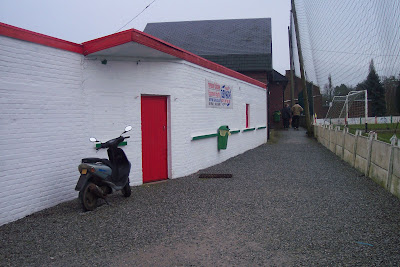 I'm not sure what this building is, part of it was a kitroom though, storing matchballs & other playing equipment. 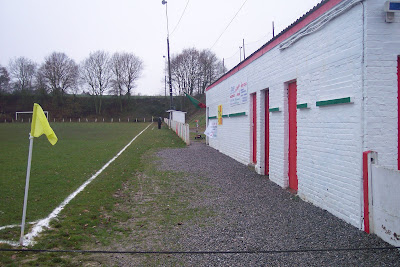 This banner was on the side, which makes me think the club name is in fact J.S. Fossoise. 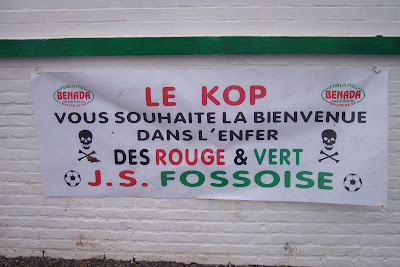 Just past this building are some overgrown steps, which I should have snapped but didn't, up to the higher pitch. Here is a photo of the pitch. It is overgrown, and doesn't appear to be used for matches. 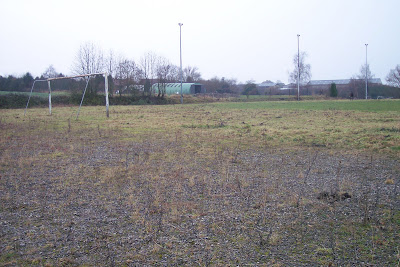 Here is another view across it, look again and you'll see a horse grazing on it! 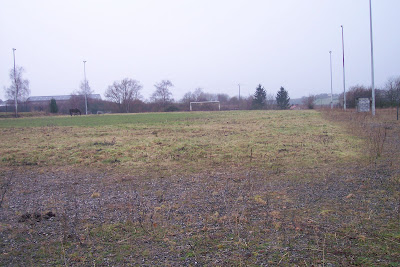 From up here we get a good view down to the main pitch. Part of the white building appears to be small tea hut, with the club colours flying from it. 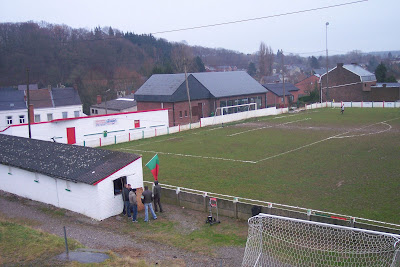 Here is a closer snap. note that 'contraption'. It's a home fan's homemade bank of air horns, on some sort of trolley, powered by something the size of a car battery! One of the strangest things I've seen at a ground since the air raid siren at Harlow Town! 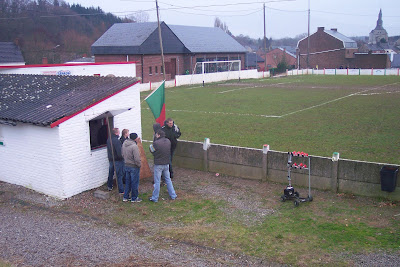 Here we are at the dugouts, back to where I am watching the match, just past them. 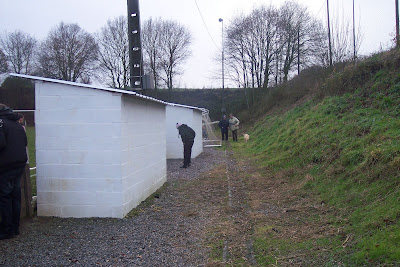 The Gembloux team celebrate victory at the final whistle. 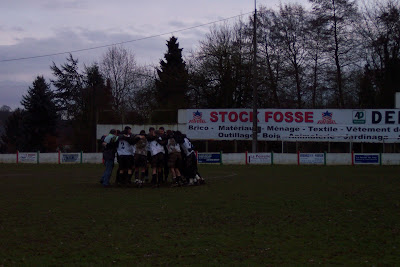 Phil comes over to say hello & poses with me & the flag! 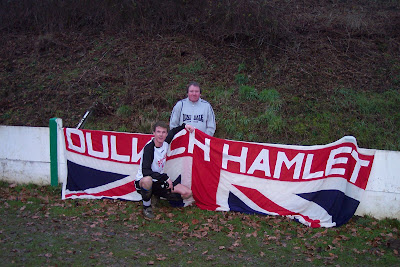