I visited the home of Belgian third division side White Star Woluwe on a 'sightseeing' afternoon at the beginning of December 2008. I couldn't, initially, gain access to the stadium itself. I walked along a path behind the stand, before going down some steps, but I couldn't get inside the perimeter fencing. I could take some snaps through & over it though. At the far corner there was some fencing opened up, as some workmen had done it to gain access. I gingerly moved onto a grass bank, but decided not to go down and cross the track, as it looked a bit too slipperly in the rain, and didn't fancy slipping over! I hadn't realised, until looking at their website, that they have some sort of link up with Sheffield United. 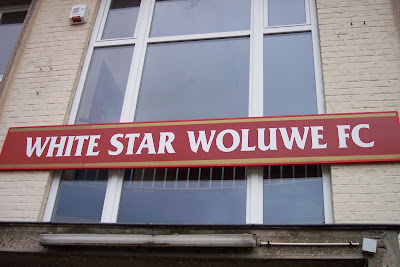 I approached the ground from the top of this road, and here is my initial view of it. 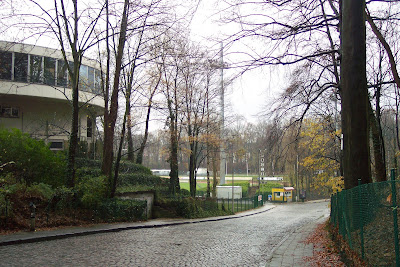 I love this old sign, it is just so 'eastern european' to me, rather than Belgian! 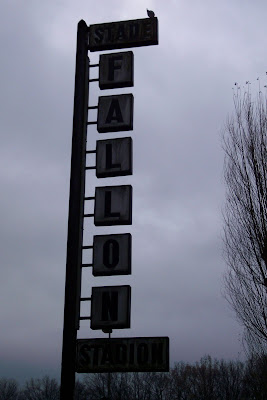 The main stadium is the largest in a bigger sporting complex. 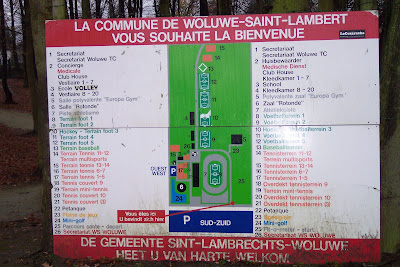 Whoops! I start our 'tour' from the far end of the hill we came down. We have got here by walking along a path to the right of this picture, behind the stand. I tried to snap this through the mesh fence, unfortunately I didn't do a good job! Sorry.... 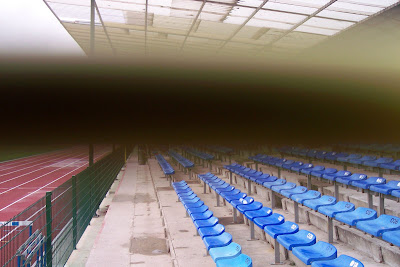 From the same point we look across to the open space of the rest of the ground. 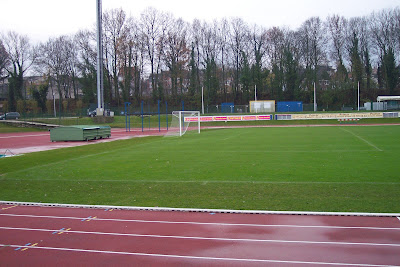 Moving down the steps, past the stand is this club building. Presumably a bar, offices & changing rooms. 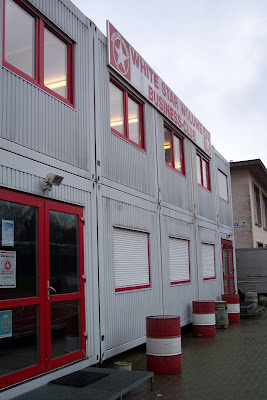 Displayed in one of the windows is a match poster for their next game. 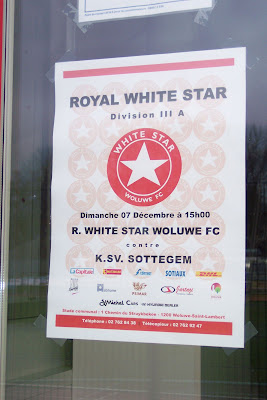 Moving round behind the goal, still outside a perimeter fence, we get a full view of the main stand & buildings. 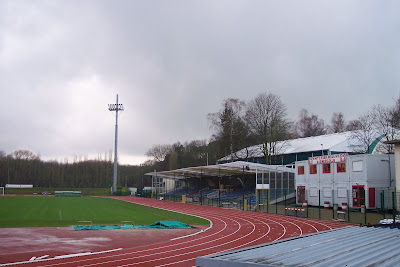 Now, looking down the far side, we see some sort of temporary stand, which is actually outside the perimeter fence, and is 'blocked in' by another mesh fence behind it! 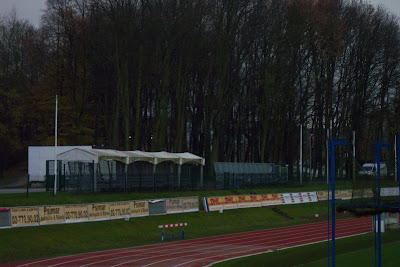 Before we move on round there we take another glance back to the main side, with more of the track in view. 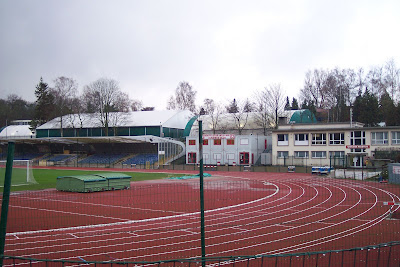 Now we look directly down the far side, grass banking, with that small stand at the back. 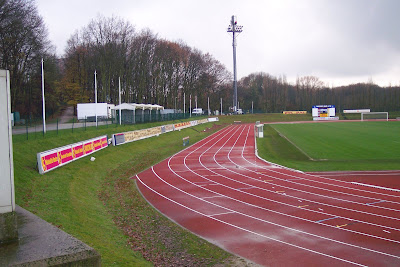 Here is that stand. Strange in that it's inside the ground, but with a mesh fence in front of it. 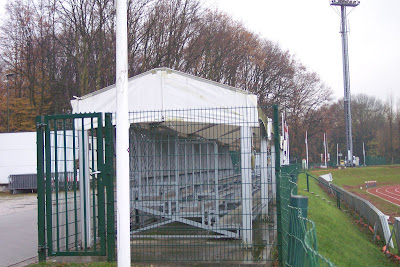 From behind it we can look across the pitch, with the dugouts in view. 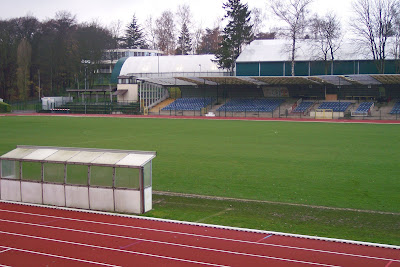 Here is a snap, through the fence, along it, which gives you a clear idea of the perimeter fence, that I said was in front of it. 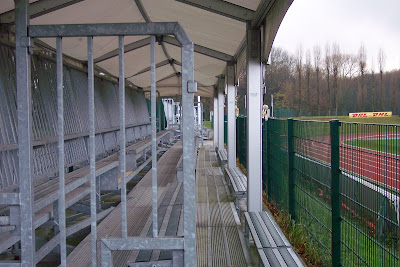 Moving on beyond this small stand there are these open benches, again behind the fence. 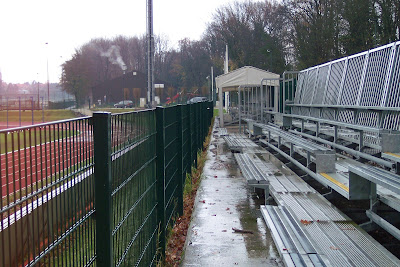 From here we look across to the other side of the track, this is the part of the ground I didn't go over to. 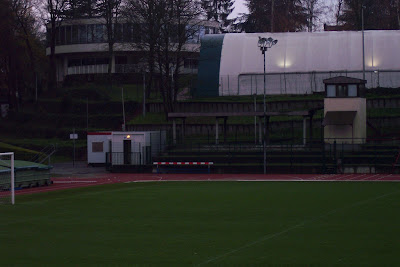 I'm now inside the gap in the perimeter, and at the top of the grass bank. Here we have another angle of the main stand. 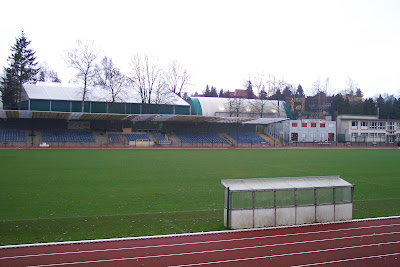 There is grass banking all the way round the bend of this goal, with a scoreboard at the back, as you can see. 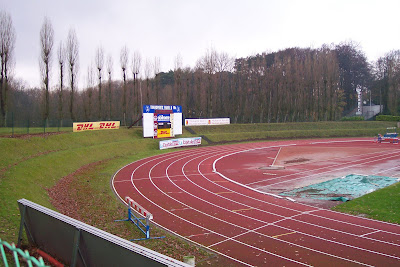 Here I get a closer shot of the scoreboard, and perhaps you now realise why I didn't fancy going down this banking in the rain! 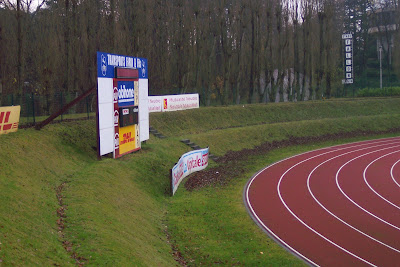 And next we glance back down the small stand side, and you can see how bizarrely located it is from this angle. 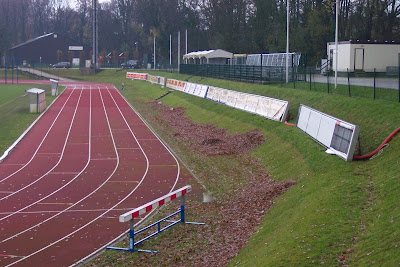 From the same spot we look across again to the main stand. 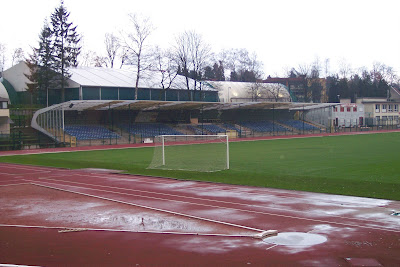 Another shot, that comes out far too dark on my old 'digital box brownie', as we look again to the main side, to the left of the stand, where the turnstiles are. 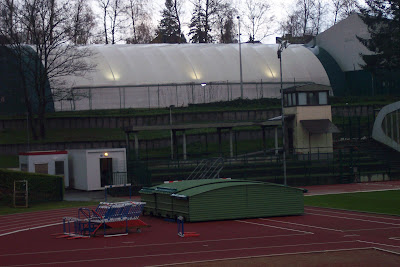 And so ends our look at this ground. Strange, in that I don't particularly like running track stadiums, but this one has some appeal to me. 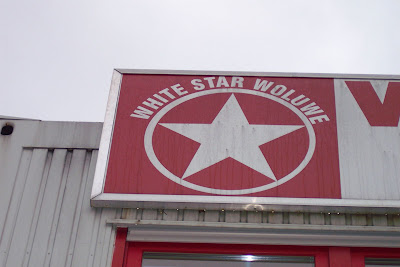 You can actually watch their games for free by walking into the complex and standing on the outside of the fencing at the top of the grass banking. I was there on a sunny day and would have preferred the option of that view (as many seemed to do) but felt dishonest doing so and paid 10 euros to sit in the main stand. One up-shot, being in the stand is the only way to get a team sheet; I suppose that makes it an expensive team sheet! All their home games are now shown live on TV Brussels; the cameras and commentary team are based opposite the main stand between those odd temporary looking stands.

Anon: Thanks for the explanation. I'd pay to get in anyway, if ever I get the chance to see a game there one day. And yes, I'm certainly sad enuogh to want a tema sheet, so thank you for the tip!