This small ground is just beyond the training pitches of FCV Dender EV; & I was tipped off about it by Stephen Harris, on the Tony Kempster forum. He wasn't sure of the exact club name, but thought it might be Standard Denderleeuw. I couldn't see the club name anywnere here, so am assuming he was correct in recalling it. I have no idea what level of Belgian football they play at. It is almost correct, it's actually Standaard Denderleeuw.

Edit:Since I posted this the correct name has been posted in the comments of this set of snaps. I have now linked to their website as a result.

Here was the entrance. 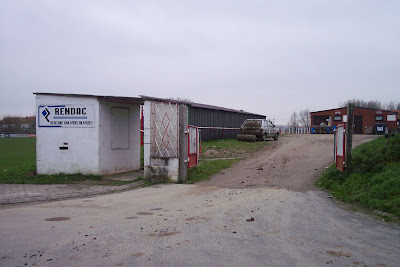 Railed off on three sides, with stands and terracing on the other. I'm going to stroll round from the entrance in a clockwise direction.
Here is the open area behind the goal. 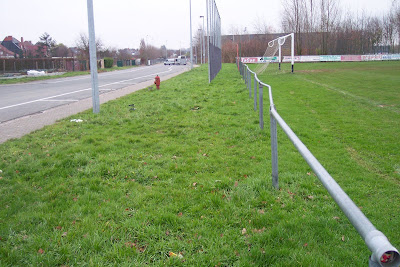 From the same corner we look across the pitch ,open on the far side, but plenty of perimeter advertising boards. 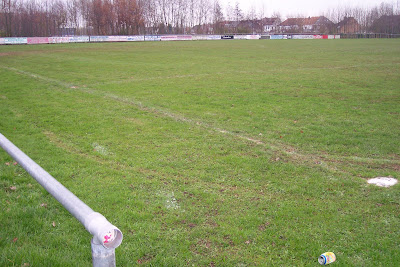 As we move along we look down the near side, and look at the small stand, with the club buildings further along. We will come to them later. 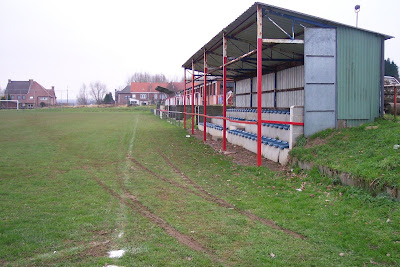 Past the goal we have another look at the seats. 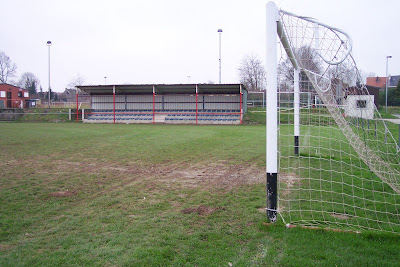 Looking across again we see the main club building, with a bit of terracing in front, and more cover past it, further down. 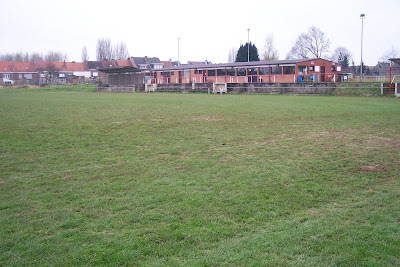 Just a railing, covered with advertising, some broken, down the far side. 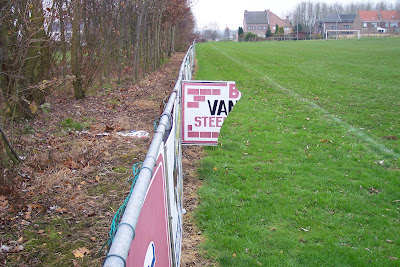 They continue down the whole touchline. 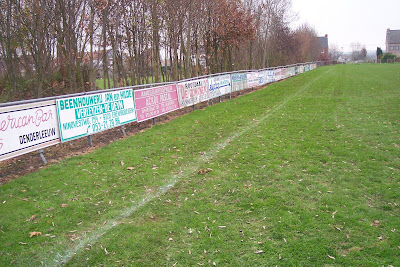 At the end we turn behind the goal and see a small covered terrace. 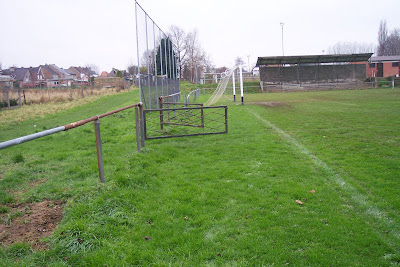 Past that we see another angle of the club buildings. 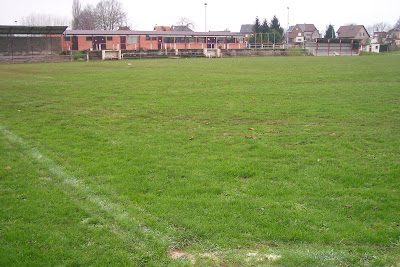 Here is the covered terrace. Wonderfully ramshackle, like the whole set up, but despite that it does appeal to me. 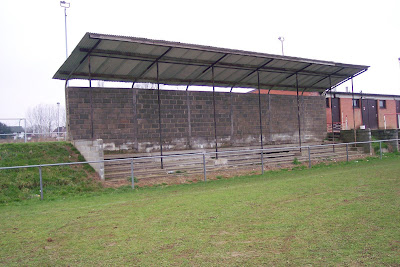 There are a couple of steps of terracing in front of the club buildings, in between the two dugouts. 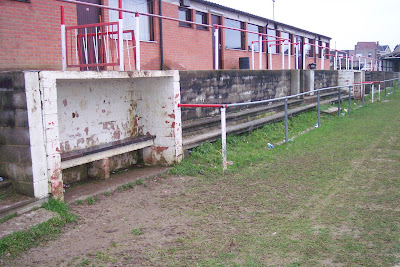 Above this, in front of the building, is a nice, hard viewing area. 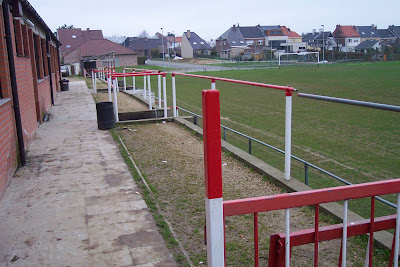 We are now almost up to the seated area. 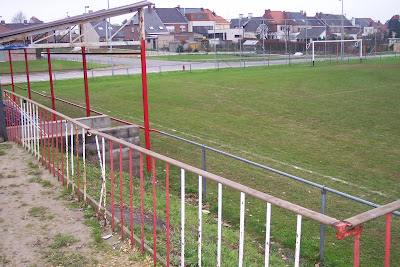 And here is a shot of the stand from on the pitch. 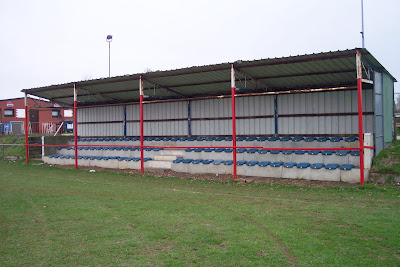 Behind it is the club, erm, 'tractor'! 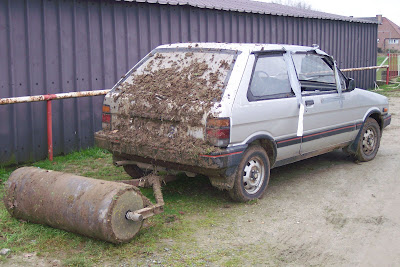 Back on the pitch we see the steps of terrace, at the front, have continued past the dugouts. 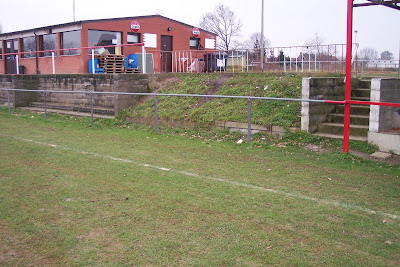 Here is a closer look at the same spot. 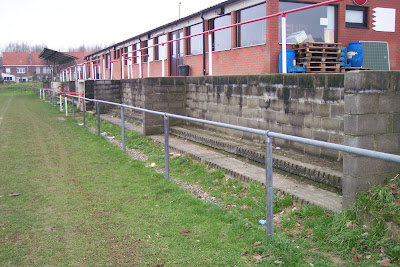 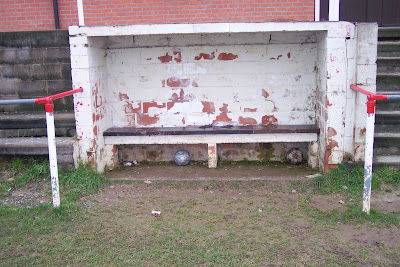 Behind the main pitch is this second, training pitch. 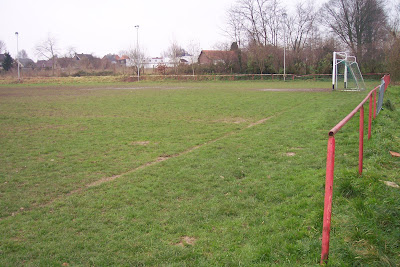 No spectator facilities, but it's railed off down the side as well. 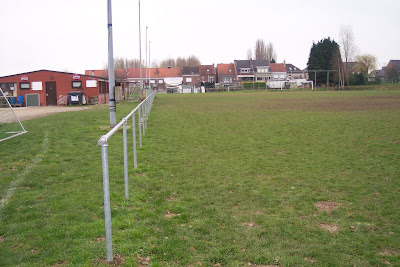 It has it's own dugouts. not the 'free range' local hens on the pitch! 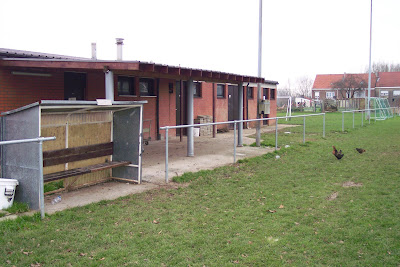 Past this we are now back to the bottom end of the main pitch again, as you can see. 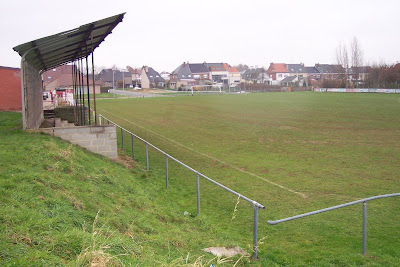 And back behind the goal, before we leave. 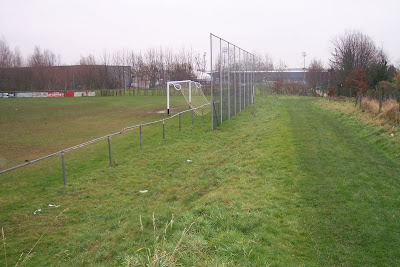 The correct name of the club is K. Standaard SV Denderleeuw. The club plays in the lowest division in Belgian football in the 4D division of the East-Flanders region.

Thank you for their actual name. It is quite difficult when there are no proper signs at a ground. Much appreciated.