Stadion Marketa is the main speedway stadium in Prague. I've tried to get in here to have a look on previous visits, but the gates have always been firmly shut. Today I got lucky. There was building work going on, and I gained access. Luckily I wasn't spotted, & was only challenged by a scurity guard on the way out!

There is a football pitch in the middle, I've had a look at the main Prague area site, & as far as I can work out, a team from their fourth level, called PSP Olymp Praha, play here. further internet searching seems to indicate this is a multi-sports club, and also the name of the speedeway club that races/raced here.. As this is a speedway stadium I have also 'filed' this venue under a new category of 'speedway'.

Here is a billboard avertising a recent speedway meeting. This appears to be the latest meeting they have in their annual calendar. 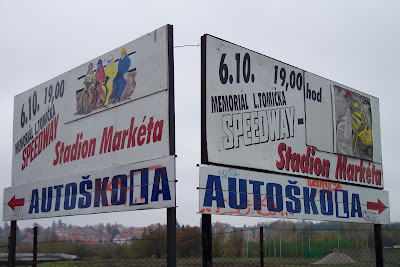 These are the gates where I got in. It was raining, so security was in the buildings to the right, keeping dry. 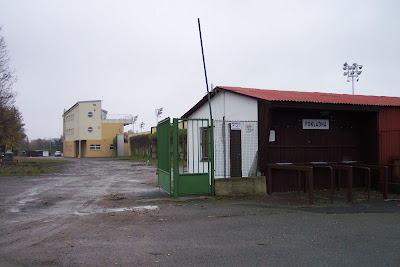 Once inside you can clearly see the back of the main stand. I turned right, as there was a gap in the inner mesh fencing, to get into the ground proper. 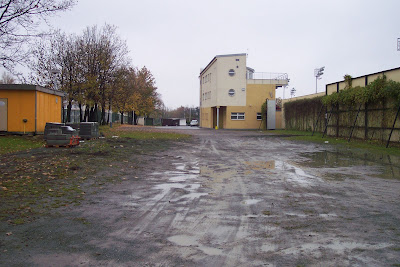 So I am going to walk you round in a clockwise direction. Here is the main side. Very impressive.
I can imagine how noisy & electric the atmosphere must be when there's a full house on a big race night. 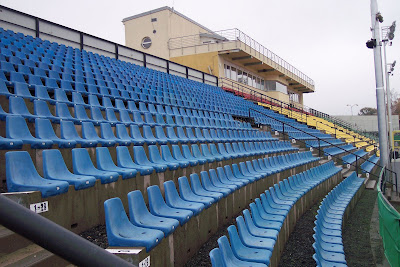 Here we look across the pitch to the far side, and get our first look at the football goals. 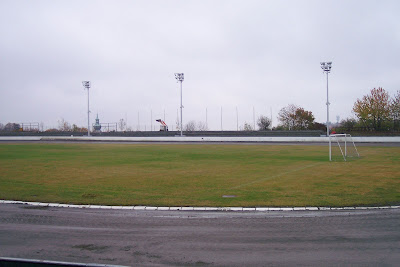 Down the track, towards the other end. 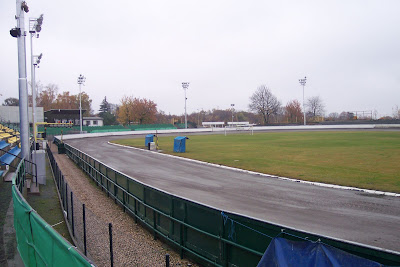 A close up of the centre of the main stand. 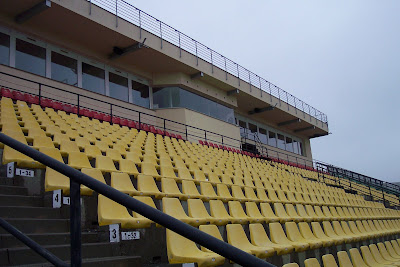 Here we look across the seats from the middle, and get our first look of the seating on the bend. 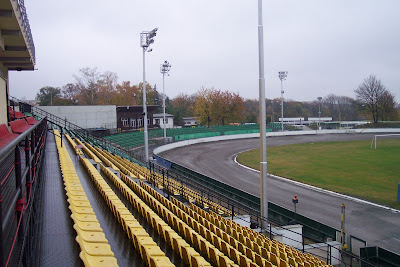 Still on the halfway line we look across the pitch, down to the dugouts. 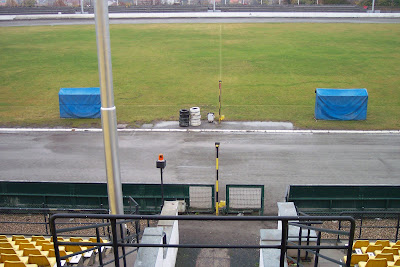 Still on the halfway line we look back towards the other end, where we came from. 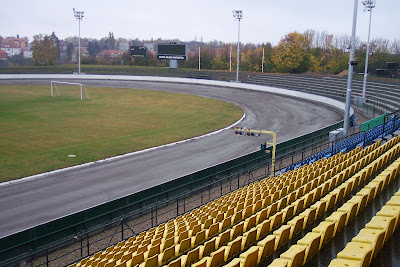 Moving along we catch a similar glimpse of the curve, with the spire of the local monastry in the background, on the right. 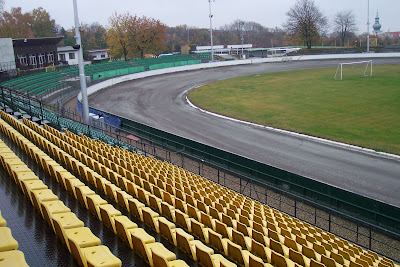 Time to move on, but not before another shot of the amin stand. 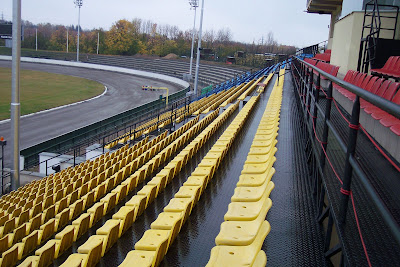 We are now behind the goal, on the curve. 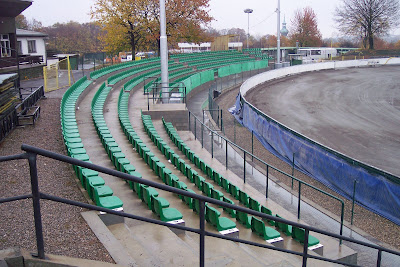 Behind here is another entrance to the stadium. 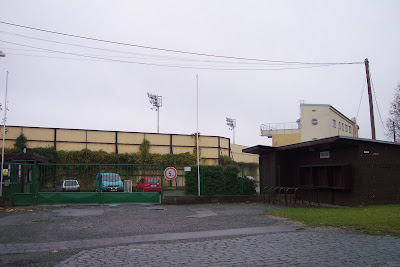 Another shot of the stand, which shows the full range of colours in the seats. 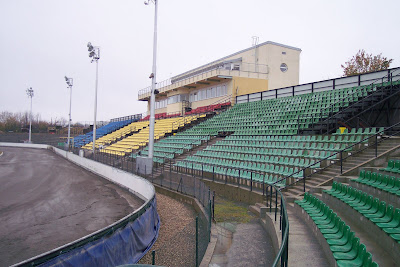 And a bit further alonng. 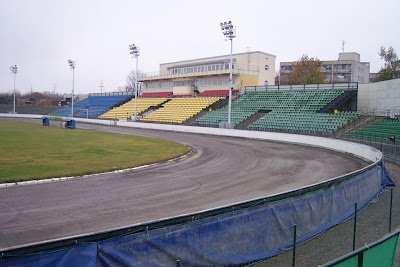 Directly behind the goal. Not the best vantage point on a matchday. 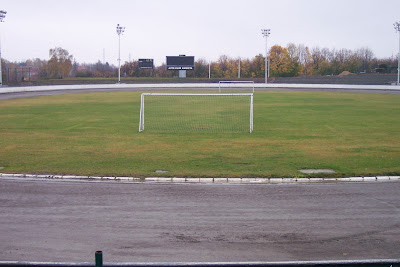 Here I am actually on the pitch, in front of the main stand. 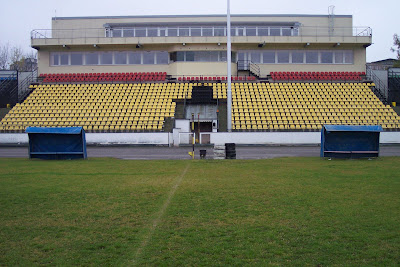 Now I reach the far side, and see the remains of the old terracing being concreted over. I'm really glad I've caught this, before it is all gone forever. Safer and more comfortable? Yes, without a doubt. But terribly sad in terms of losing character. 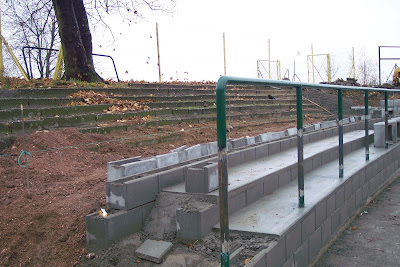 Moving round to the next bend and it looks almost finished. Presumably the whole stadium will be spick & span for the 2009 race season. I wonder if they will bolt new seats onto this concrete too. 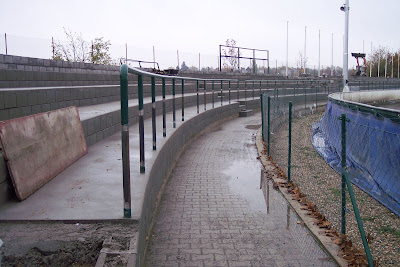 Here's another shot, back behind the other goal, of the main stand. 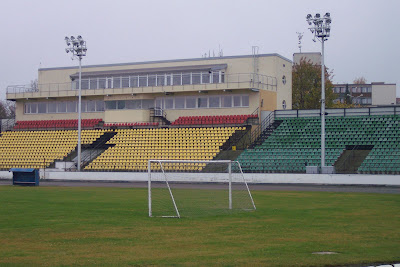 Back to the concreting work, and this is where thee workmen are up to. Which shows what the terracing looks like, before it is finally concreted over for good. 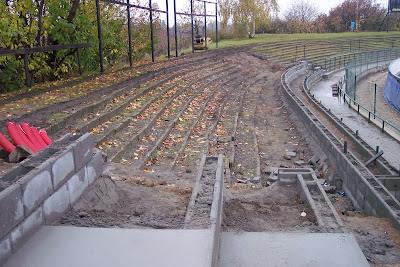 Here we look back down the open side. 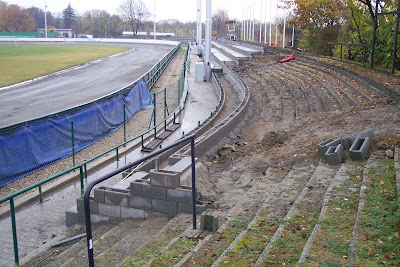 Turning behind the goal we see the big scoreboards at the back. 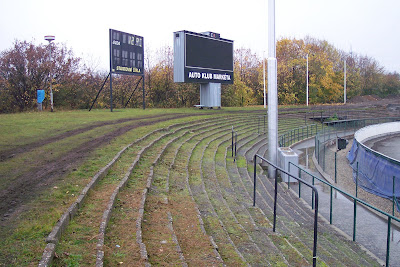 Now we turn to the corner where I came in, which was just behind that large pile of sand. 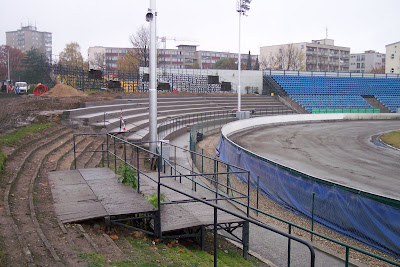 This is an interesting shot. You see an old temporary type stand behind the newly concreted section, with the main stand starting past that. 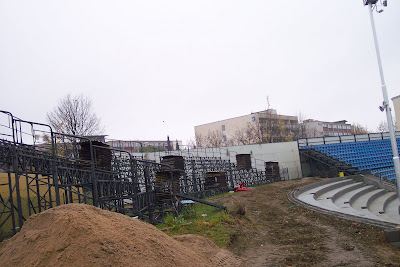 One last look down the main side, before we leave. 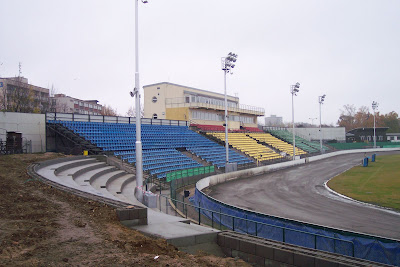 Interesting. I know this stadium well, having been a regular visitor since 1997.
The uprgades, are all part of the
work for the Speedway Grande Prix,
World Title series.
The stadium has improved a lot recently. Ten years ago, the modern
seating on the photo did not exist. All that was there, were old
wooden "bench" seats from the old days. Speedway has been here since
the 1930's on a regular basis. Tony

I was here for a league match in September 2005 and then a Grand Prix meeting in May this year when we were sat in the green seats just coming away from the tapes to the first bend. It's fascinating to see the changes on your photographs. Many thanks for posting them.